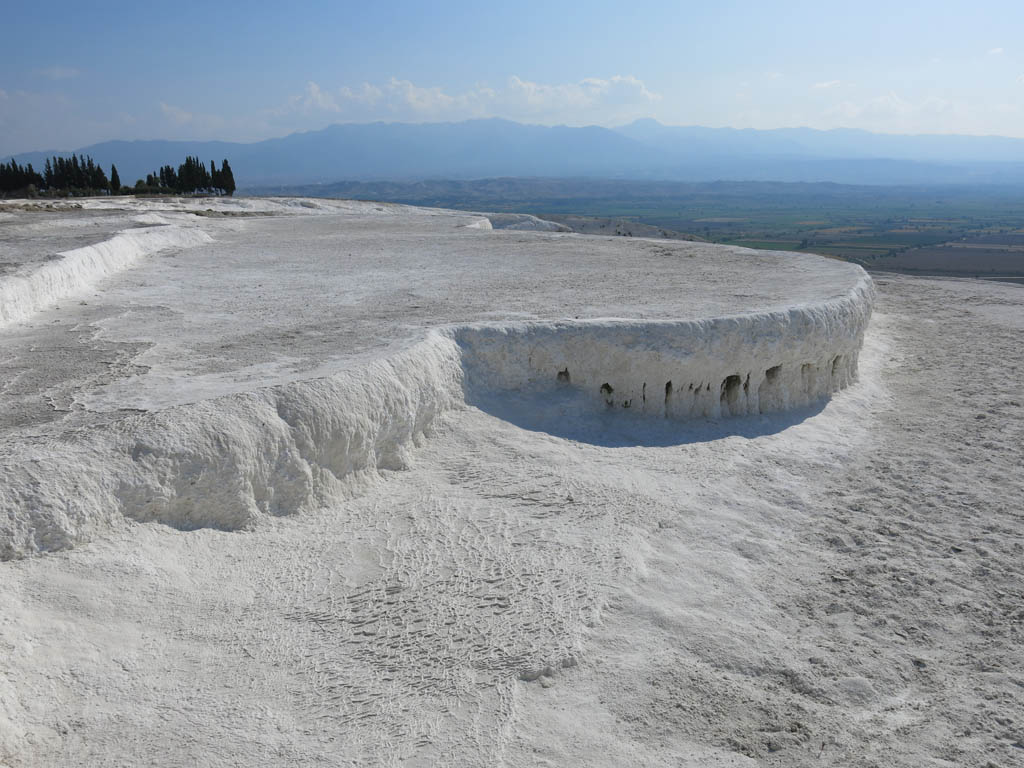 Sadly it was time to say goodbye to the coast for the time being and head back inland. But that was OK as it was time to visit some of the key geological and historic sites that Turkey has to offer. 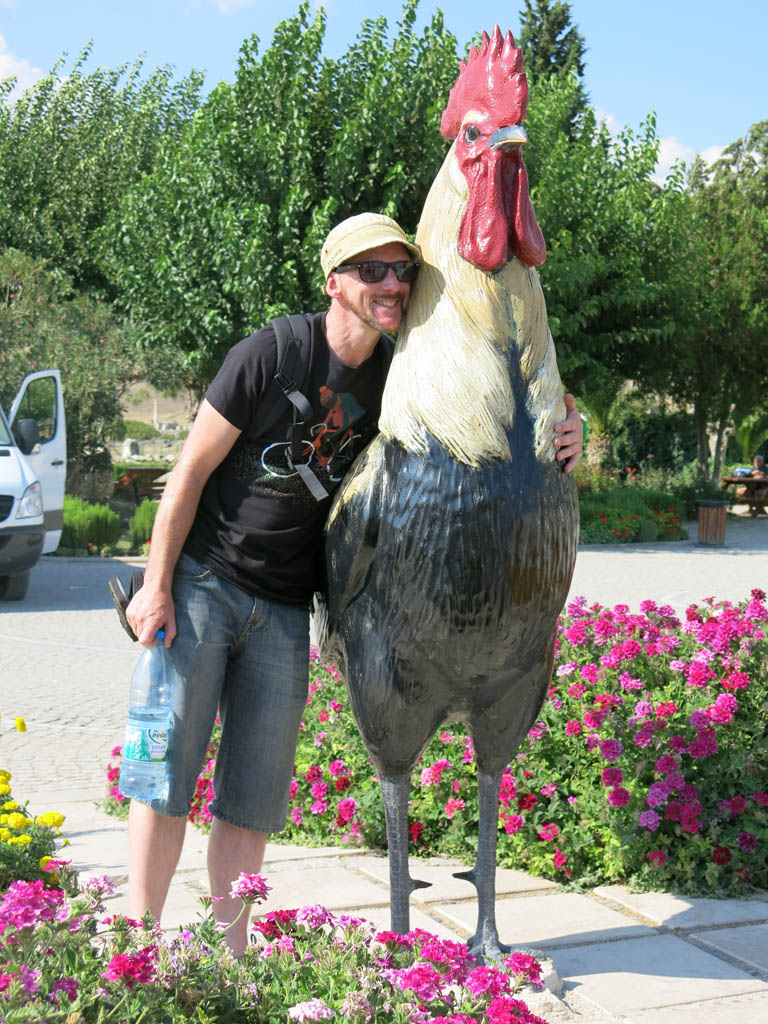 me and one of the locals

We left delightful Kas on our way to the town of Pamukkale. Pamukkale is renowned for three key things: natural hot springs, amazing white cliffs, and ancient roman ruins. Oh, and roosters apparently.

After a few hours of driving, we arrived into town. Since it was the middle of the afternoon and as a result super hot and bustling with tourists, we had an hour or so to relax before heading to the sites to check everything out. 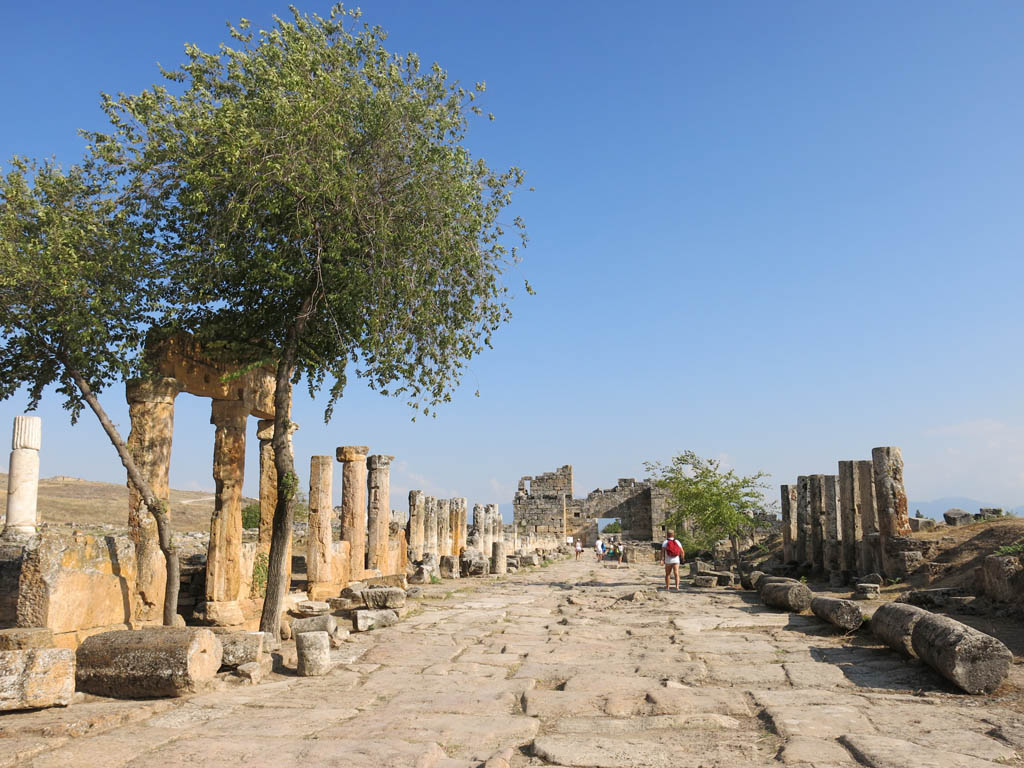 It is quite remarkable to see everything all together in the one site, almost like a big amazing coincidence. We started at the far end of the site to work our way through the ancient site of Hierapolis. They sure knew where to build the city back in early BC, as they had the luxury of having a site founded on natural hot water, and as a result being able to have some amazing hot roman baths. 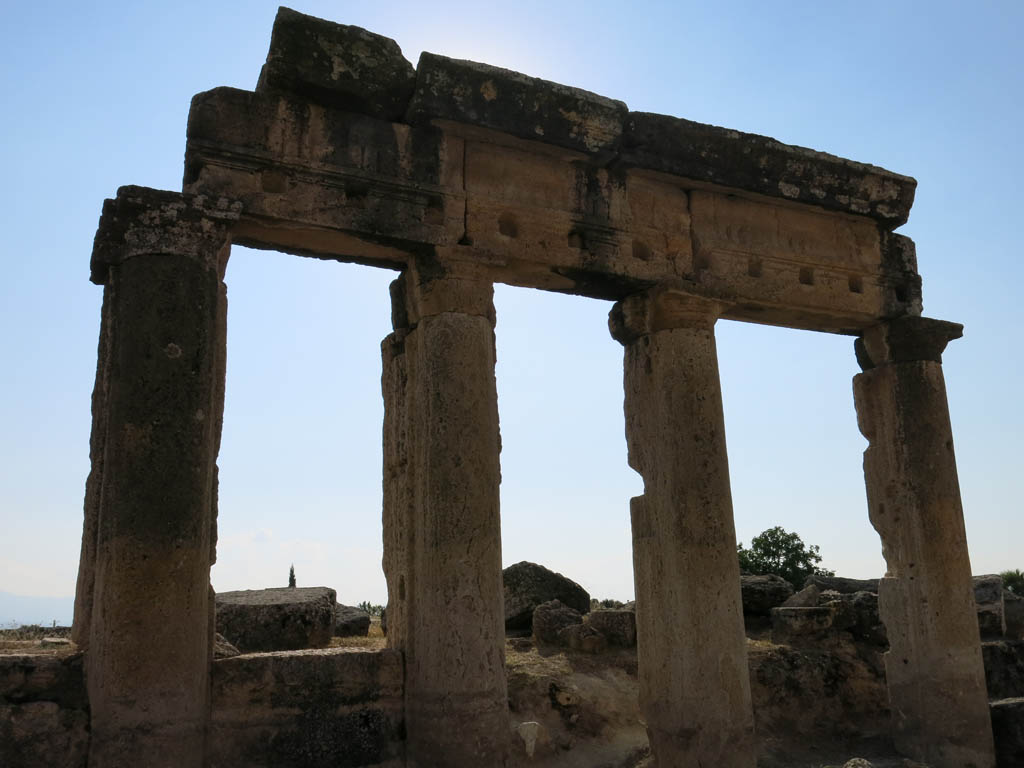 Ibo gave us an orientation walk to let us know the main features of the site. It was quite a big area, and was split into a number of smaller areas, with nice warm pools scattered around to relax. We made our way to the cemetery to see many sarcophagi scattered about the landscape. It was pretty crazy to see so many columns still standing and so many ruins about that we were able to explore. 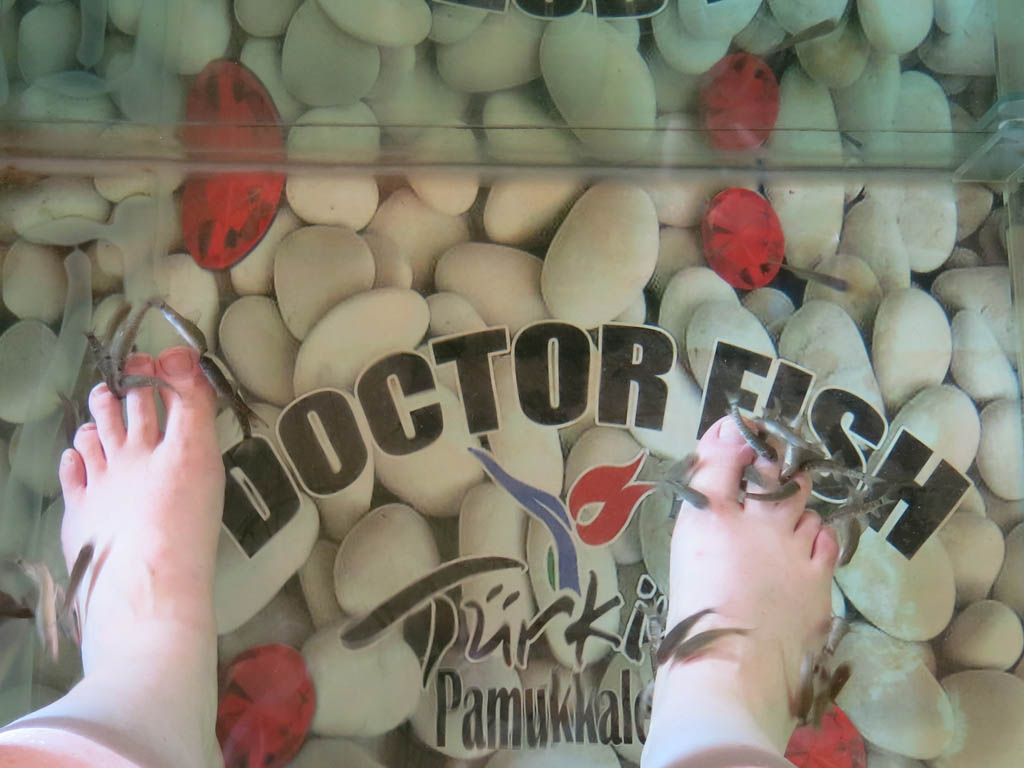 Given it was still super hot, Kate was keen for a bit of time to relax rather than keep running around. So what did she get up to? Why not have a bunch of tiny fish nibble at your feet for a while? Hhhmmm…. 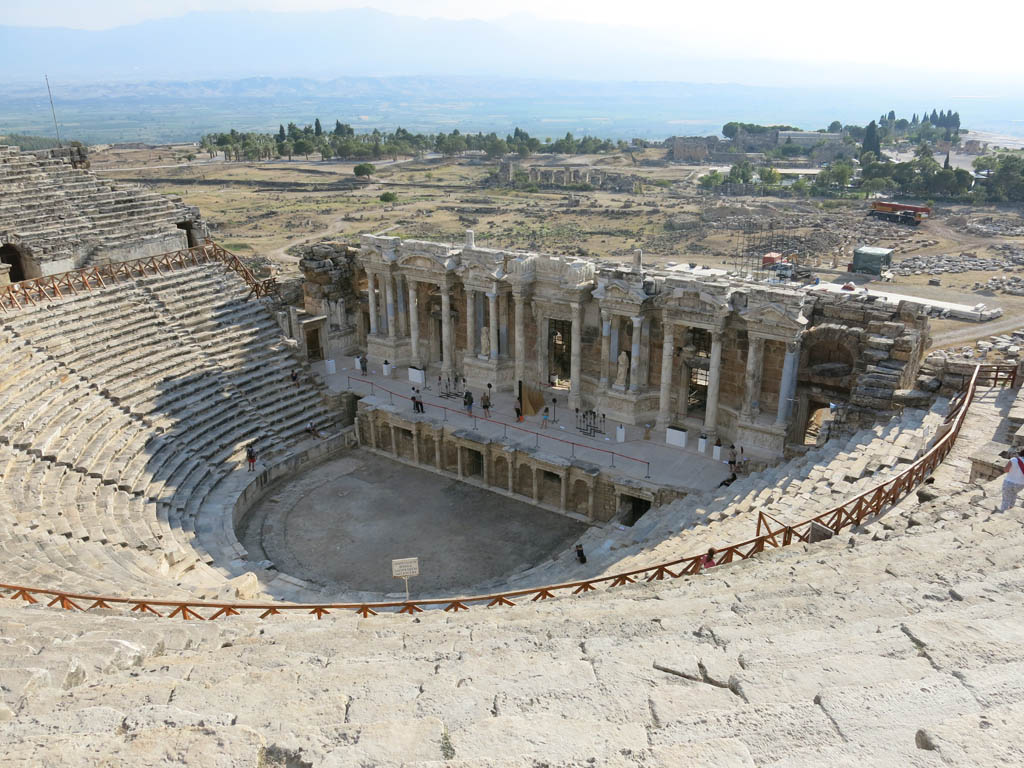 the amphitheatres keep getting bigger

Not being my cup of tea, I decided to continue exploring. I made my way up the hill to the huge amphitheatre that sat atop the hill. Part of the the main stage had seemed to have been restored and looked quite amazing. Even though it was so hot it was quite relaxing to sit up above Pamukkale and stare out over the ancient ruins. 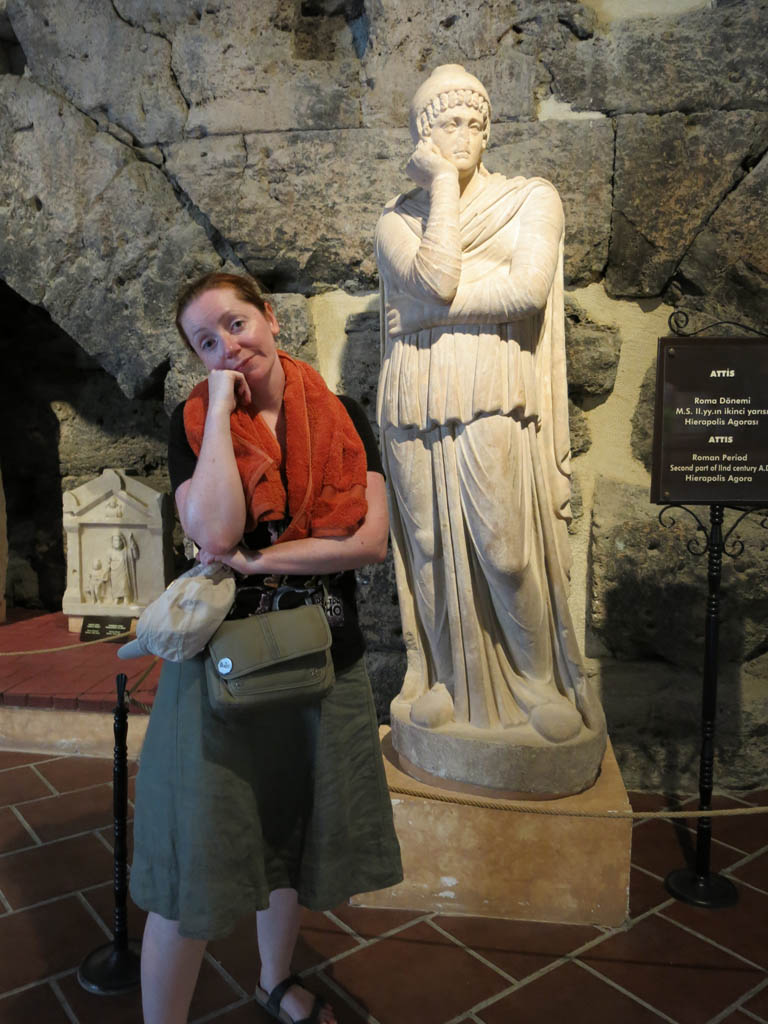 By this time Kate’s feet were nice and nibbled and we had just a little time so we popped into the museum part of the site. Much of the very well preserved statues and sarcophagi were taken from off the site and placed in the museum. This seemed like a good move as they were in immaculate condition. We even got to see some more Medusa. 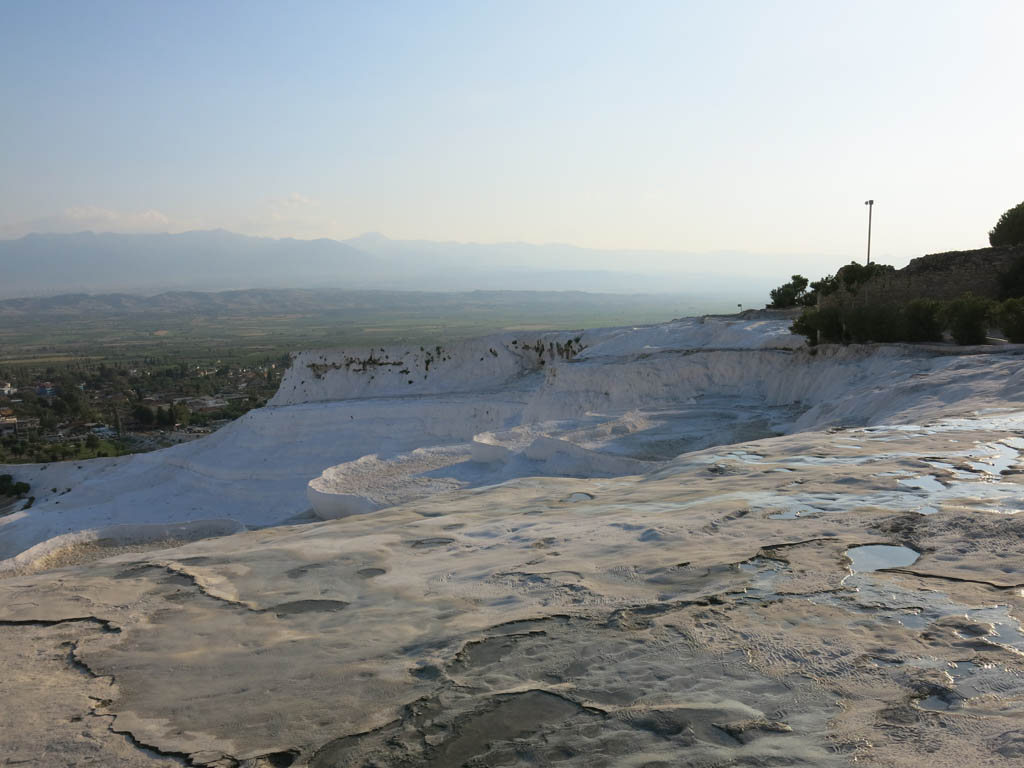 Time was disappearing, as was the sun, so we decided to start heading back to our hotel. By heading back, we made our way slowly down the incredible white cliffs that tower over the town. We were able to walk right down them, as long as shoes were off. Even though there was warm water flowing all over the place, it wasn’t particularly slippery. 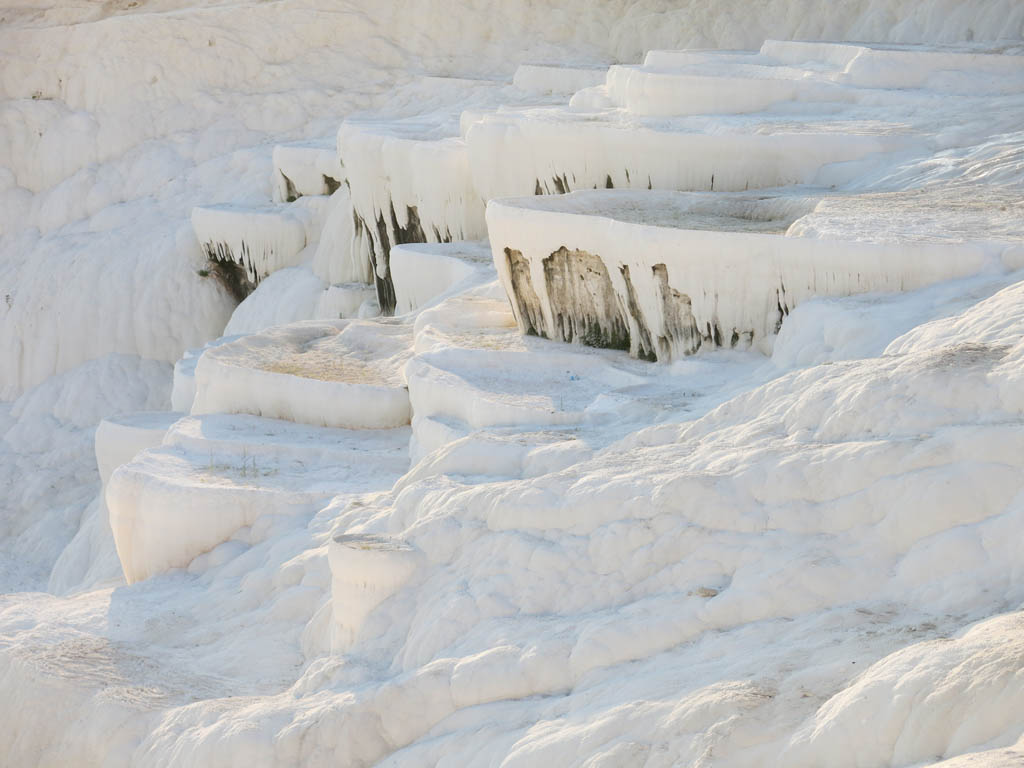 it was hard to get your head around 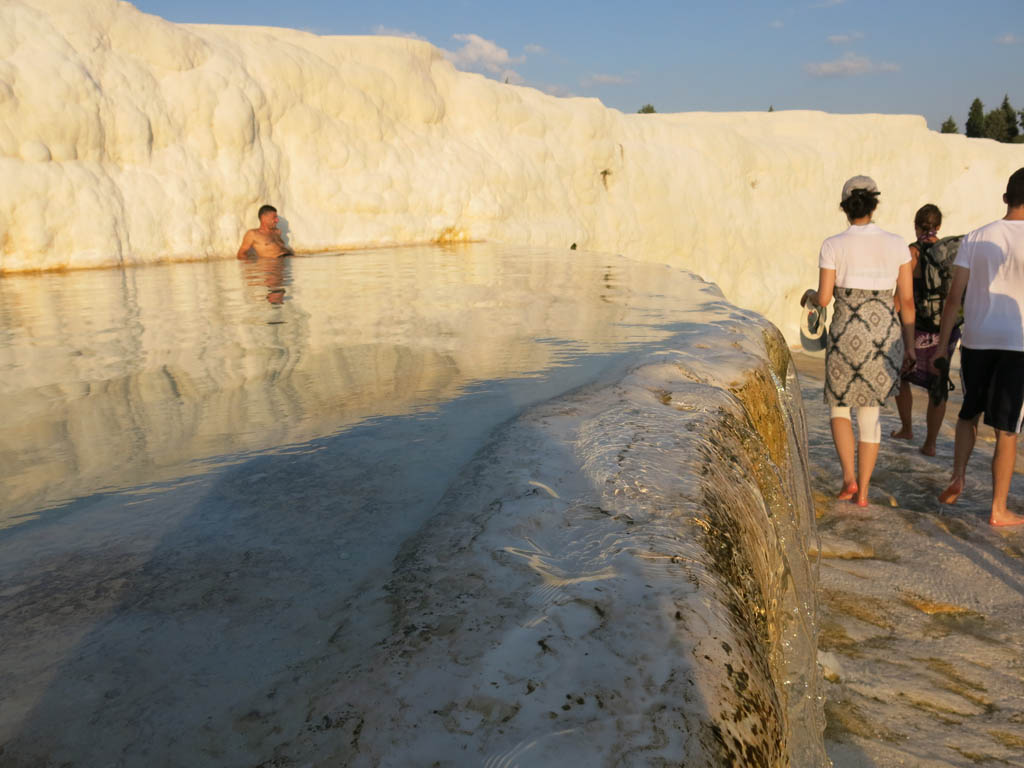 As we made our way down larger pools would be there to soak the feet. Some tourists took the opportunity to completely submerge in the pools, but Kate and I just did a bit of casual splashing about. 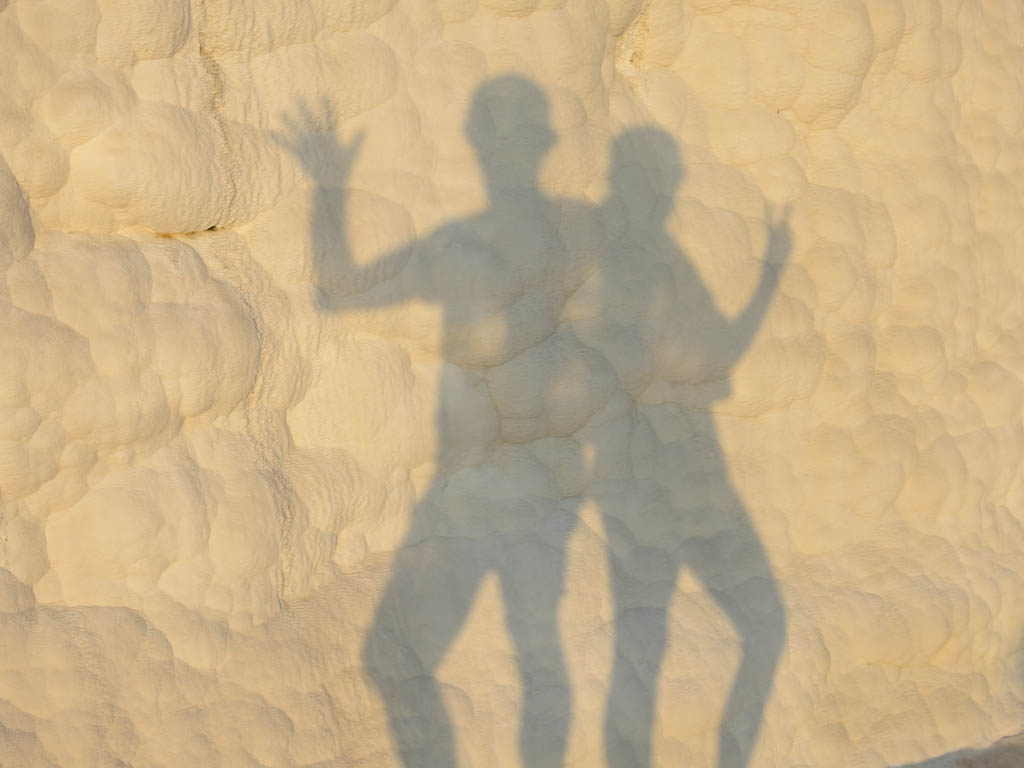 The white walls and dropping sun gave an opportunity for some more wacky photos. My shadow puppet skills were pretty lacking, so we just decided to strike some classy poses. 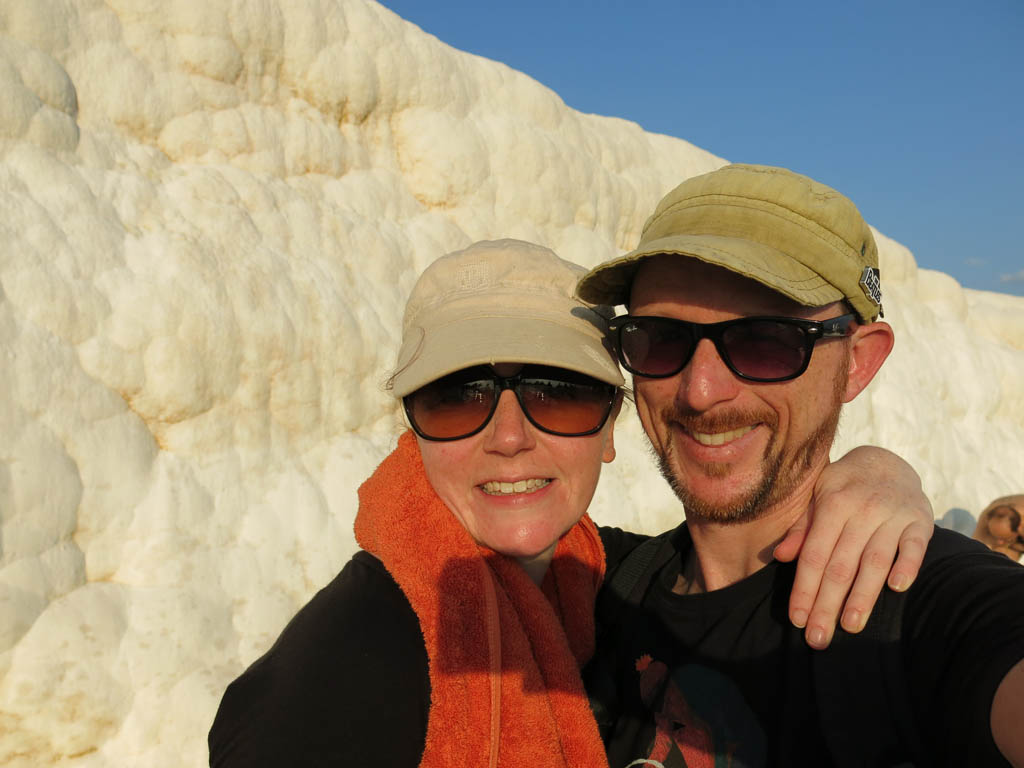 almost at the bottom

After an hour we reached the bottom, our feet feeling nice and supple from walking on cliffs and soaking in the water. After a quick bit of dinner, we had the opportunity to visit an actual real Whirling Dervish ceremony. Only about half the group decided to take part, but Kate and I were super keen.

Rather than a tourist show, this was an actual ceremony that is conducted each day. We took some seats in a dedicated space (that was pretty sparsely populated) and let it unfold. 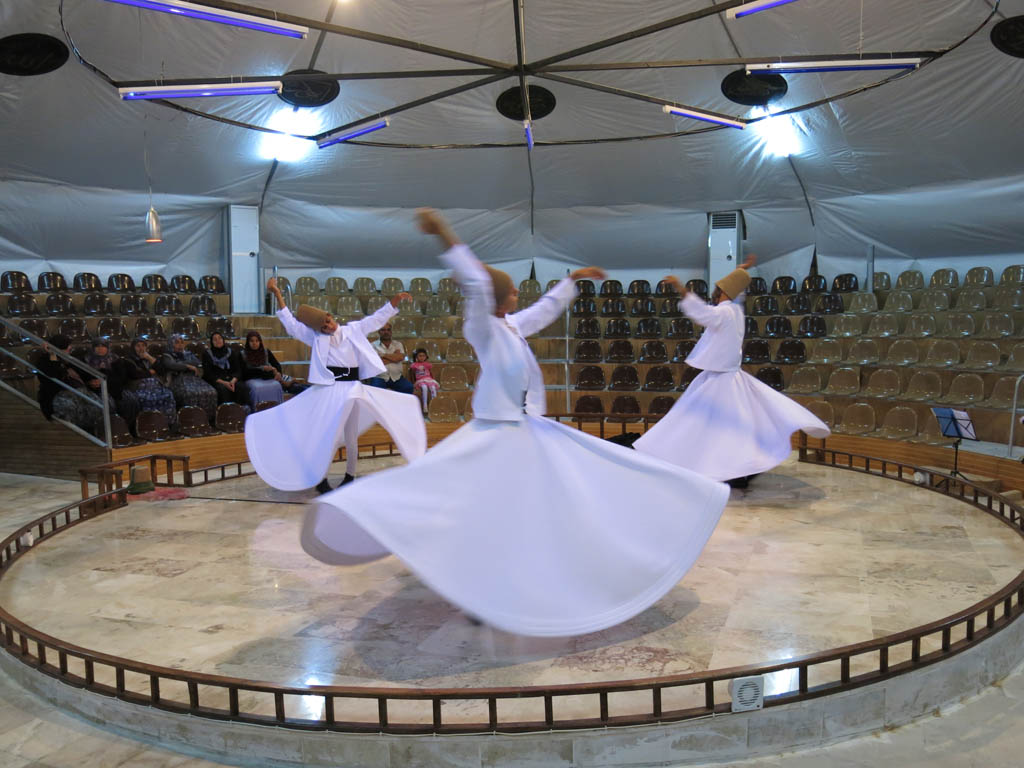 We weren’t able to take photos during the actual ceremony, but it was actually really haunting. Two musicians played music and sung, and were then joined by 4 others, 3 of whom were performing the “whirling” part of the ceremony. One guy in particular had an amazing ability to have his dress soar around him. 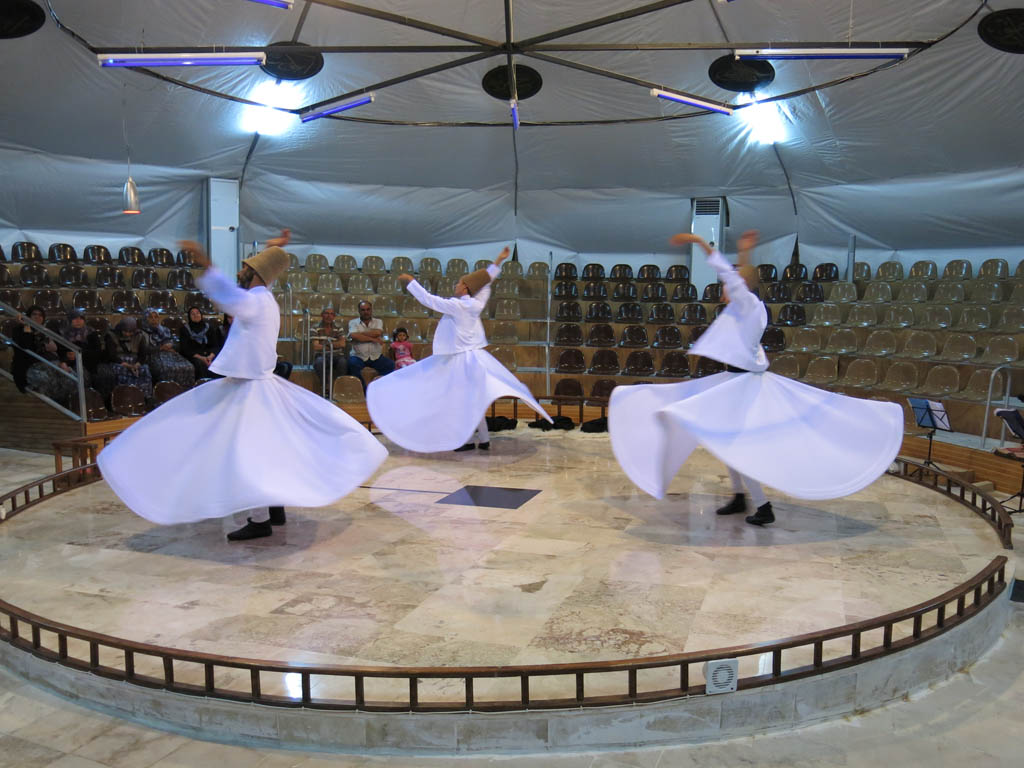 After about an hour the ceremony wound to a close. We were all quite spellbound by it. To conclude the 3 whirlers came back to do a quick final bit where we could take photos. Sadly the pictures can’t capture the grace of it all.

And with that another day in Turkey came to a close. It seemed we were all now very sleepy and tired and looked forward to a good nights rest before our next day of adventure.