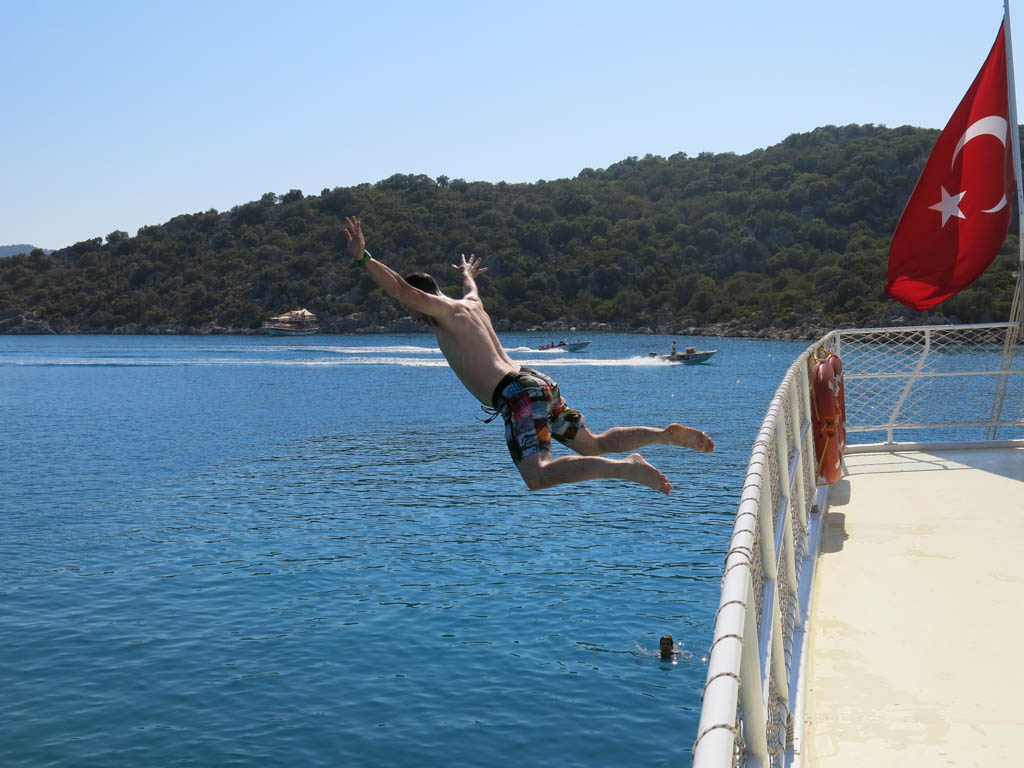 So what have I been doing over the last day or so? Well, not much really. Just hanging out on a boat on the Mediterranean and having a casual swim whenever I felt like it. Ha!

Sorry to gloat… that’s not fair is it? But it is not a bad way to spend a day I gotta say.

Anyway, we started out the day in Antalya and had a very lazy morning. I still wasn’t feeling 100% so took it a little easy, just having a casual breaky to start the day before we all jumped in the van to head to our proper introduction to the Mediterranean. 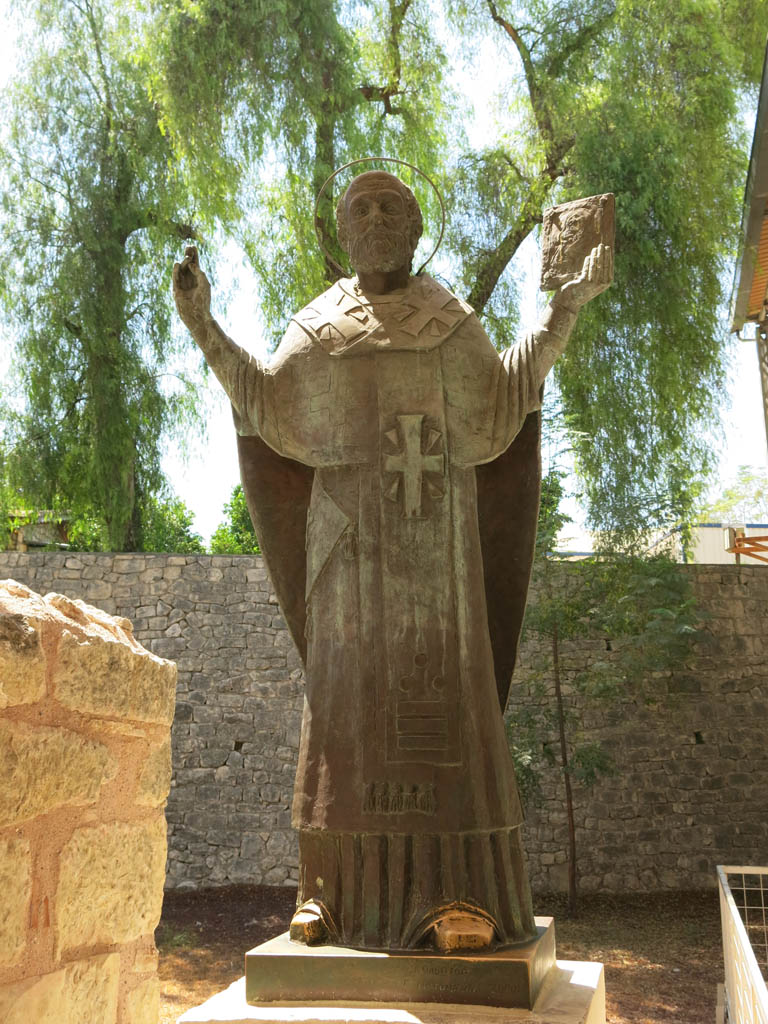 On the way we stopped at the costal town of Demre. There seemed to be two main things to this town. First of all it is the home of good ole St Nicholas. Yep, that St Nic. You didn’t realise he was from Turkey did you? Well he is, and his church is there to prove it. The other interesting thing about the town is that it is FULL of Russian tourists. So much so that every sign had Russian on it. 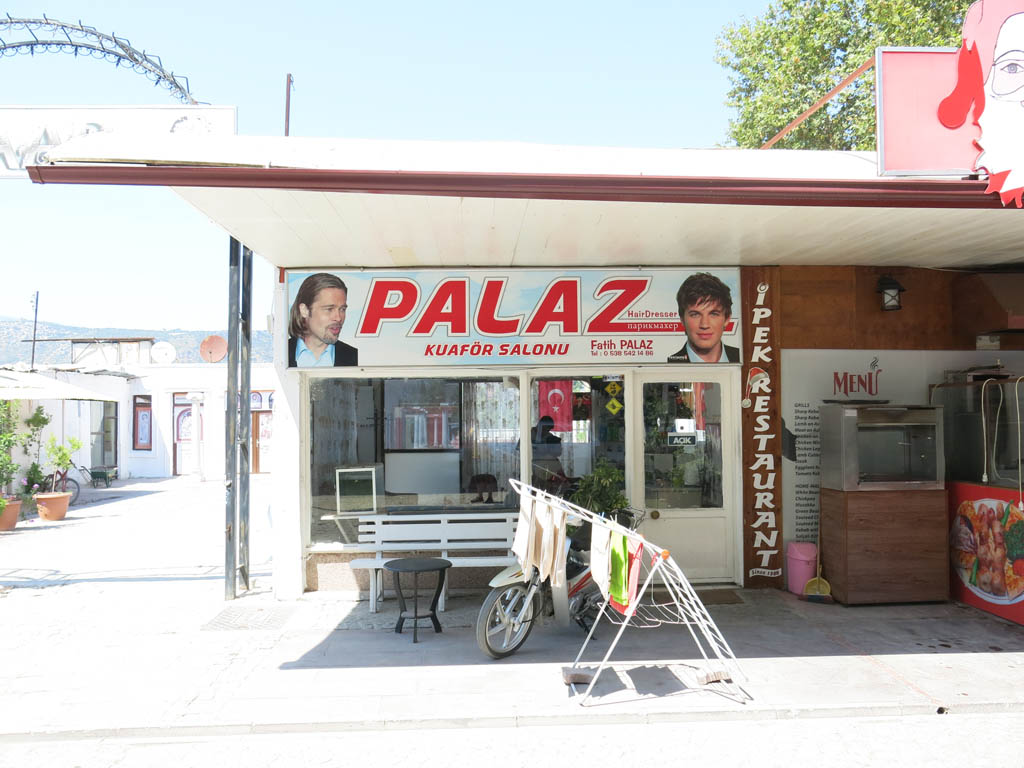 i’ll have the brad pitt cut thanks

We only had a little time to explore so I didn’t have time to get a haircut. Although I have always thought I would look good rocking the Brad Pitt look, so I guess this is an opportunity lost. 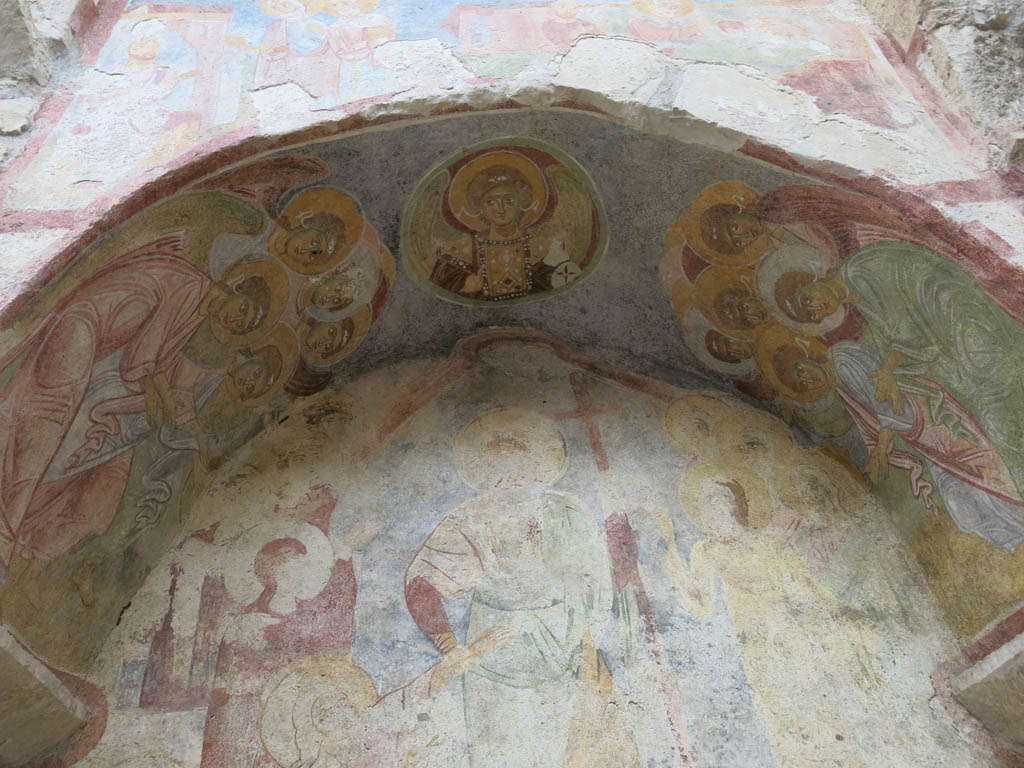 lots of paintings all about

After a quick bite, Kate and I went into the St Nicholas church. It was quite cool actually. Quite small, but the paintings on the walls were in relatively good nick (ha, see what I did there) and the whole building was looking pretty good. There were mosaics still about and even the resting place of St Nic was there. 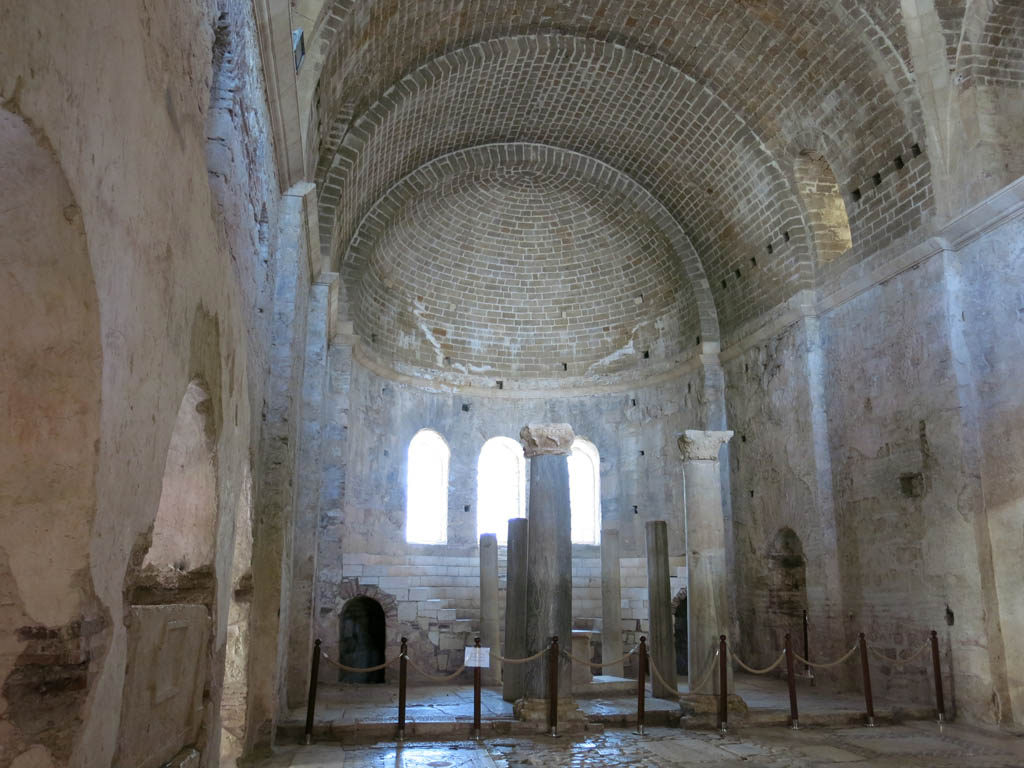 By the many Russian tourists in there paying their respects, it was clearly a special place for them. 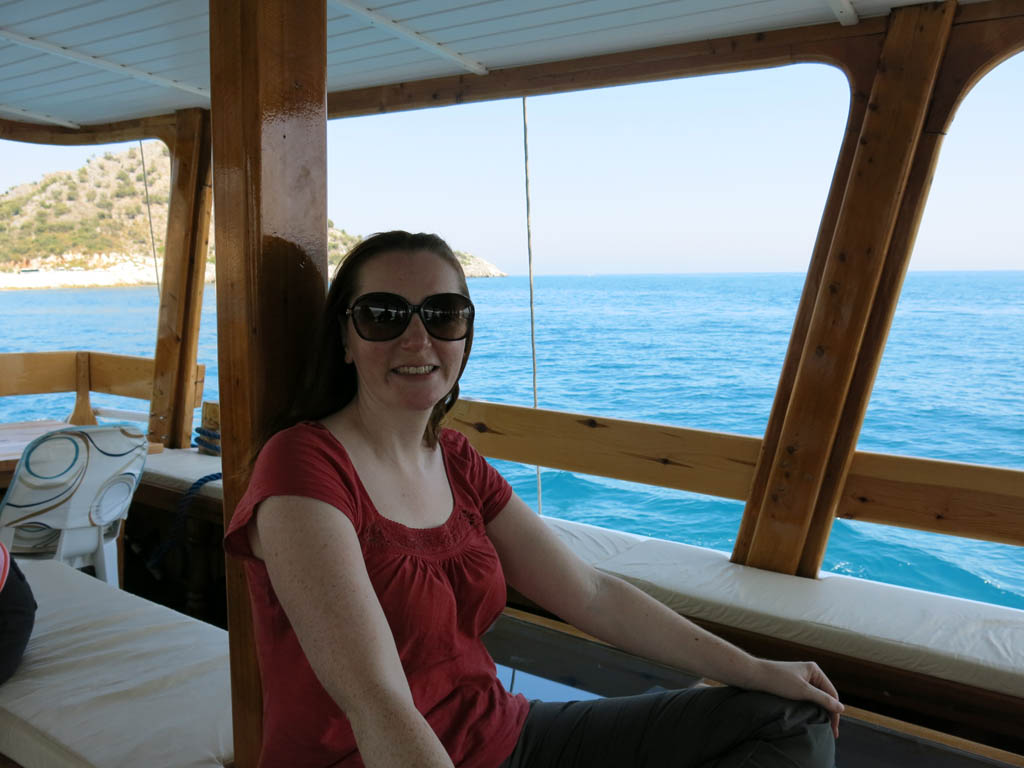 kate looking remarkably happy to be out on the sea

We didn’t spend too long in there, as it was time to head to our waiting boat to head out onto the water for the next 24 hours or so. Our first boat was just one to take us about some of the small islands and to moor somewhere for us to have a swim. 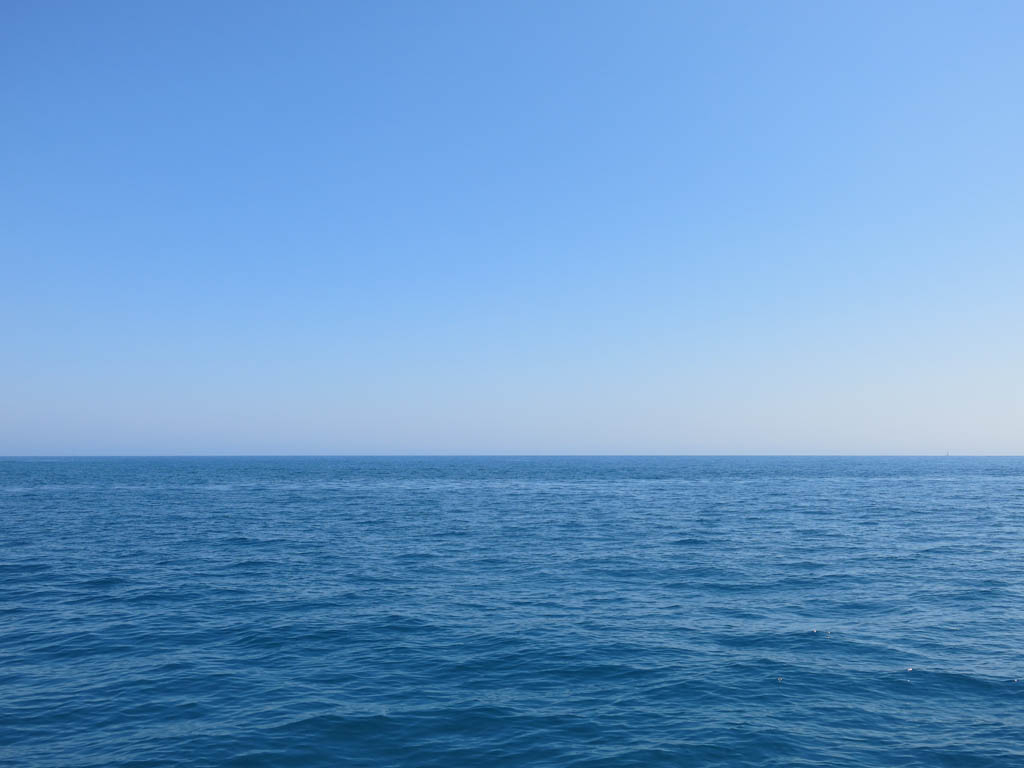 And man! The water was so amazingly warm and blue. It was gorgeous. While the water in Antalya was nice and warm, the colour had nothing on this. 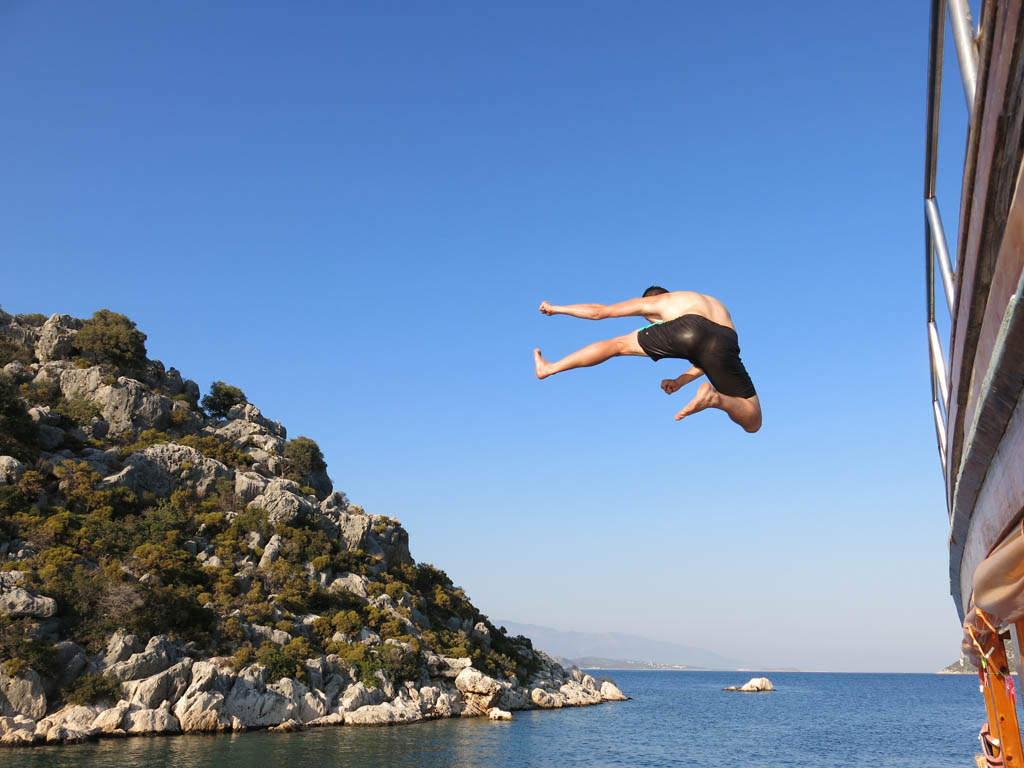 The boats crew were very relaxed about our shenanigans and were happy for us to jump off whatever part of the boat we wanted. It meant I could recreate my Guatemalan spiderman leap (as you can see up the top of the blog post), but with the glorious Mediterranean as the backdrop. Tour mate Ryan elected for some flying Bruce Lee action which was most impressive. He seems to have a habit of jumping off everything he can find.

After a bit of time here swimming (were we saw turtles! woo!) it was time to jump on another boat, which conveniently pulled up just alongside, which was to be our accommodation for the night. Yep, we were going to cruise about for a while, do some more swimming, check out some ruins, then moor for the night where we would have dinner, play games, and sleep on the rook under the stars. 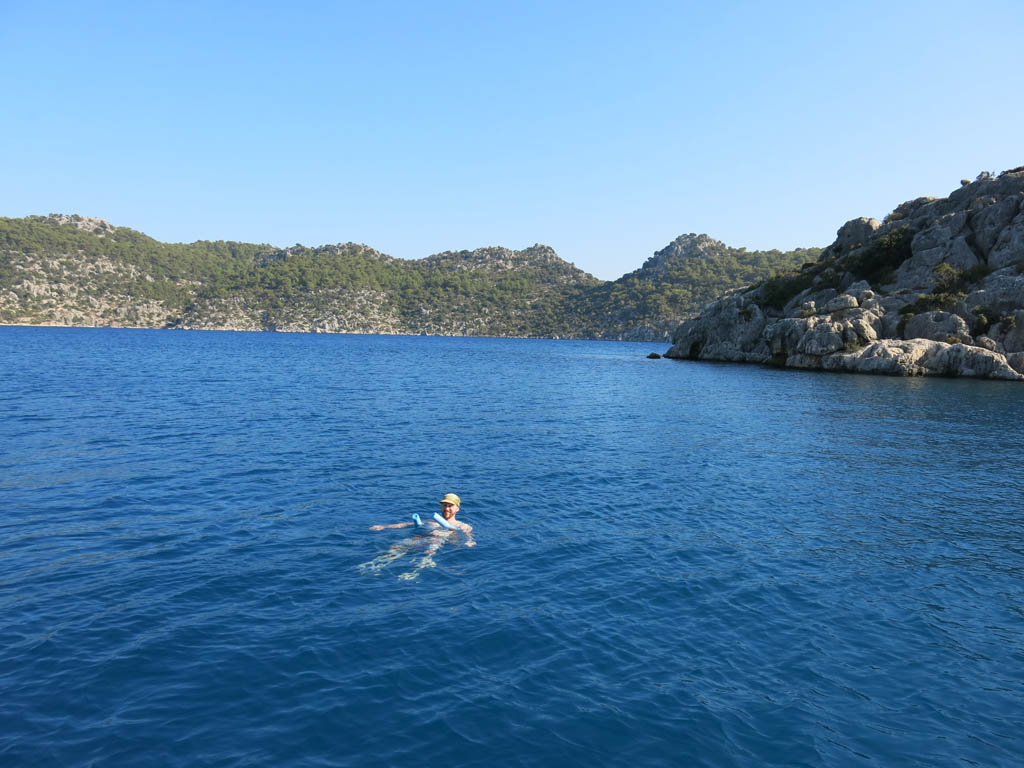 me and my noodle

First order of business on the new boat? More swimming! Of course! Best feature of this boat was the copious amounts of pool noodles. While the sea is very buoyant, who want to use ANY energy when on holidays, am I right?! So with pool noodles in hand, it was time to simply float and relax.

After a bit more of a swim it was more time for sailing about and exploration. On some of the islands were old ruins of inhabitants from many centuries ago. Talk about waterfront views. 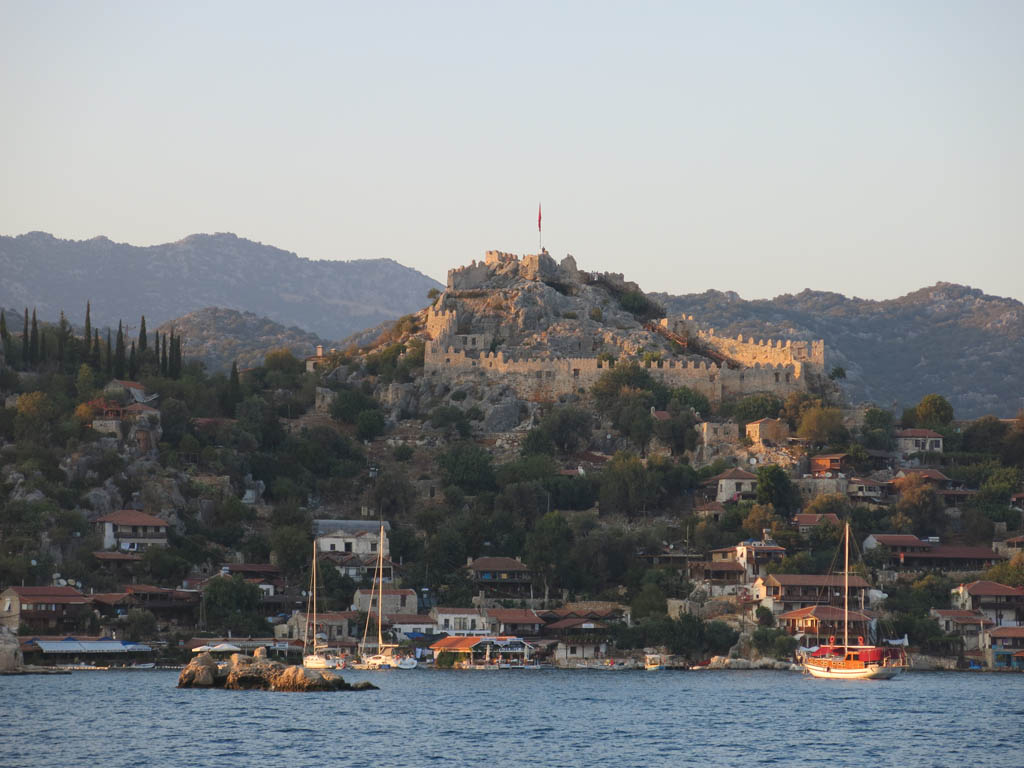 castle on the hill on the water

The main ruin though was the Sunken City Ruins of Simena. A significant Lycian site, it sits majestically overlooking the water and is also still in quite good condition. Most of us jumped of the boat and made our way up to the top. 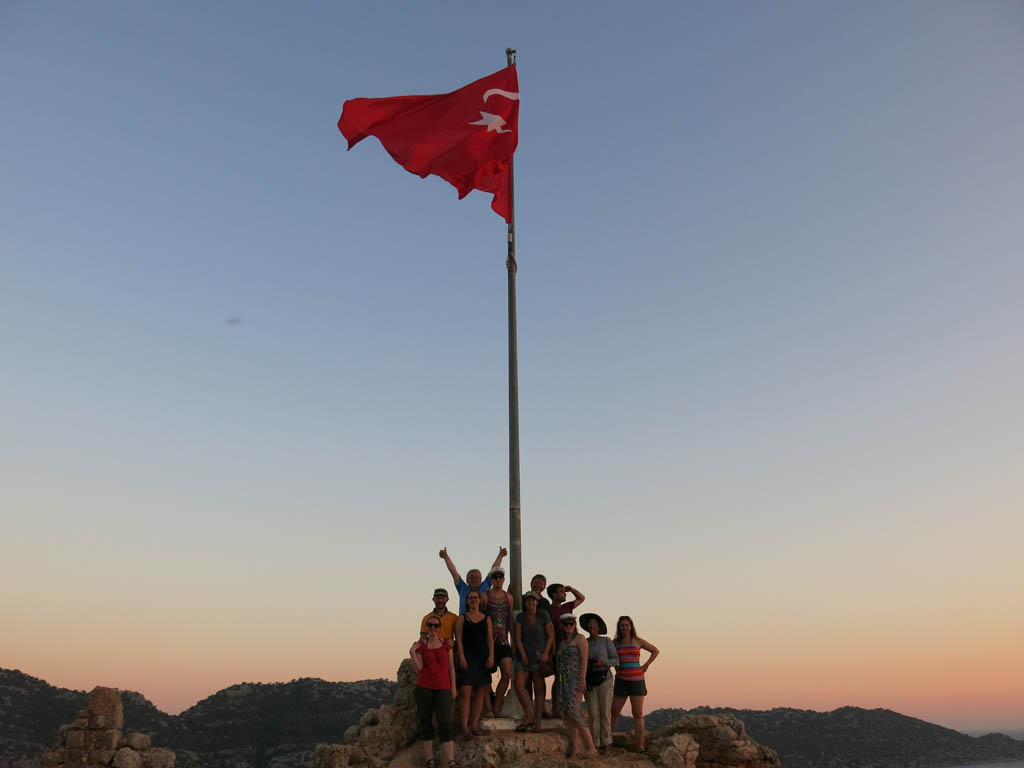 While it wasn’t that many steps, when it is mid-30’s warm (feeling in the 40’s) it sure takes it out of you. But the view was spectacular and made for a great group photo. 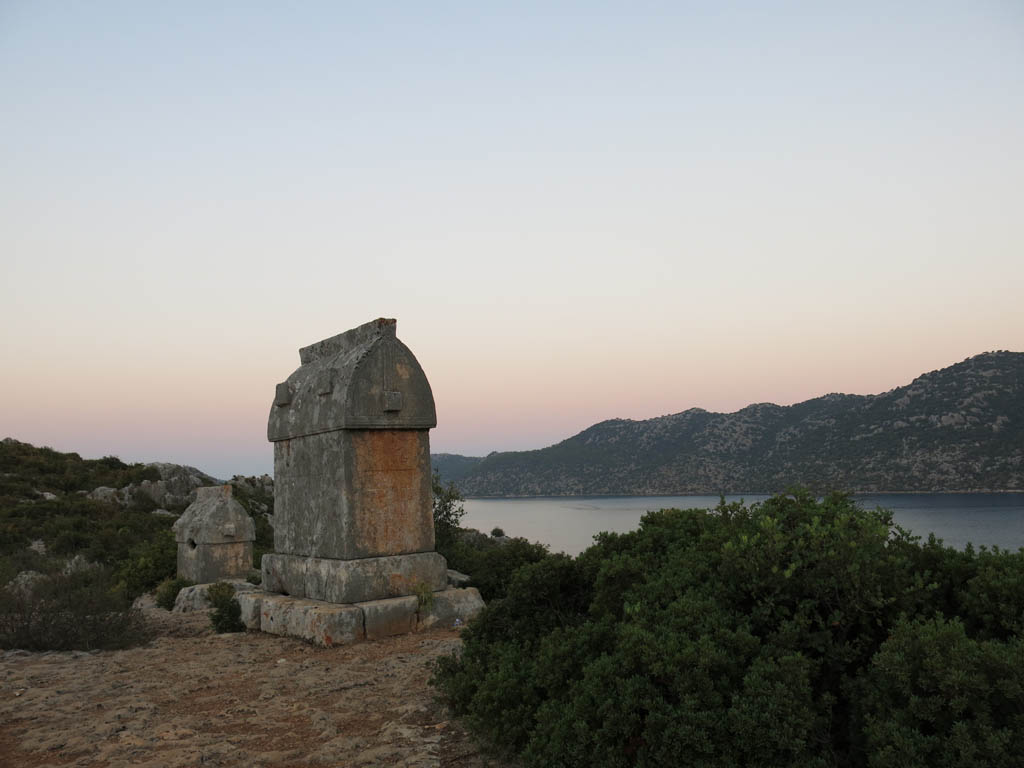 not a bad final resting place

Nearby were a number of sarcophagi of significant folk, that were very Nordic in design. The top was intentionally shaped like an upside down boat, so in the event of flood, they could all sail to the afterlife. Very cool.

With our fill of ancient ruins, it was back on to the boat and a short trip to drop anchor for the evening. A wonderful meal was prepared for us by the ships two crew, of course including some fresh fish. Mmmm. The rest of the night was spent lying on the front of the boat, staring at the wondrous clear skies. I counted 6 shooting stars although there were no doubt plenty more.

Some games followed for a couple of hours before it was time to hop up on the roof of the boat onto our makeshift beds and catch some z’s. Not the most comfortable bed, but when on a boat in the Mediterranean, who’s complaining?