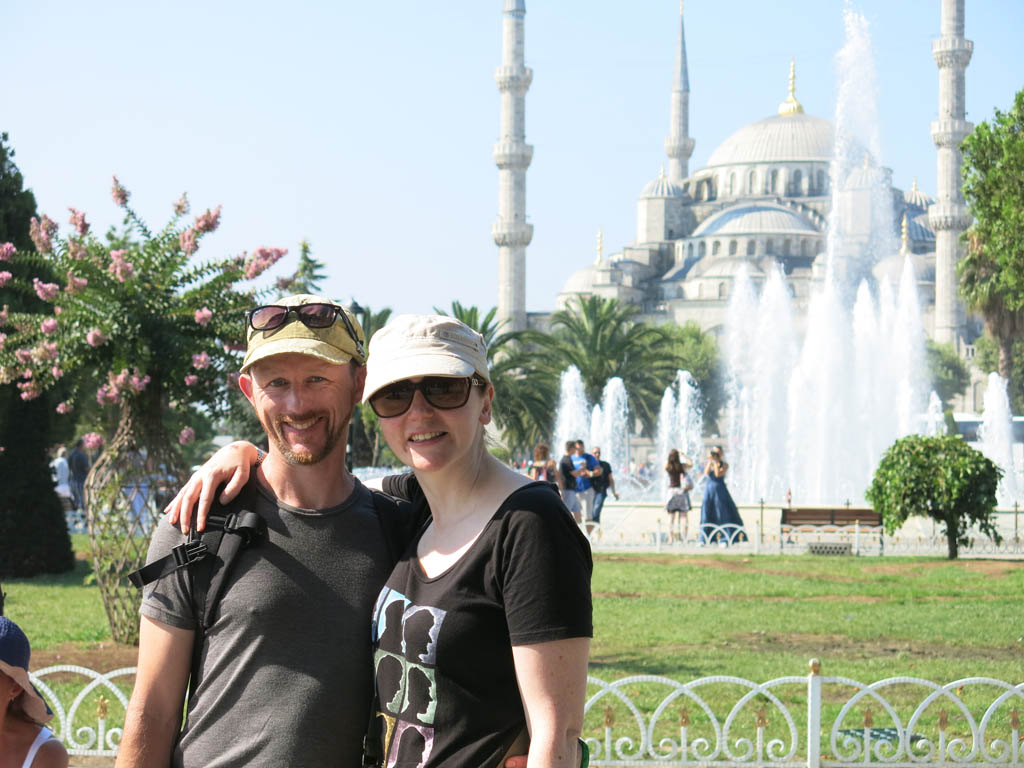 Hello avid readers! Apologies for the updates being so sporadic and weirdly timed. Our schedule is meaning that doing them each night is increasingly difficult, and I am actually typing this story up while in our mini bus heading towards our next stop.

But first I have to go back a day or two. When I left you Kate and I had just started our tour of Turkey by meeting the group and having a dinner together in Istanbul. Well, our first day proper was all about getting to know Istanbul more with an orientation walk by our tour leader Ibo.

While we covered a bit of the same ground as Kate and I had explored ourselves, we visited completely new areas of the city, all within a short distance of our hotel. I was completely disoriented… I felt like we walked for hours and hours (which we did) only to end up pretty much back where our hotel was. I thought I was on the other side of the city!

inside the blue mosque

Anyway, we were very fortunate, as today Ibo took our group inside the Blue Mosque, which as you will recall we didn’t end up doing ourselves. Score! While there was still quite a big line, it moved quickly, and in no time at all we were inside. 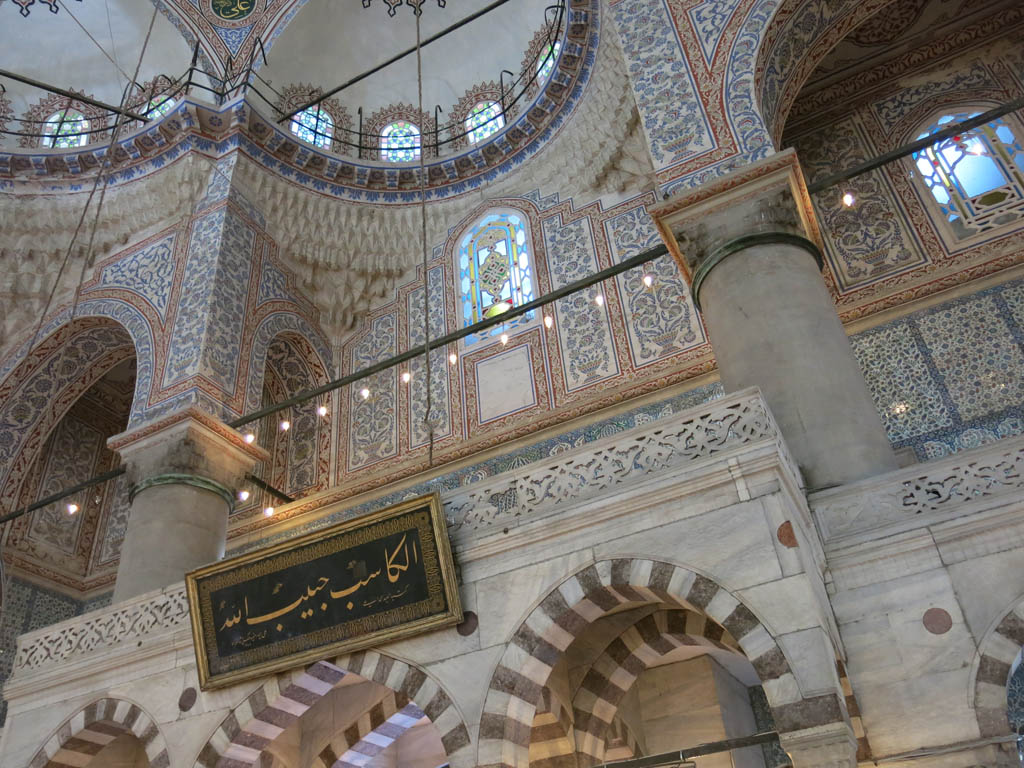 It was quite spectacular, in many respects much more so than Aya Sophya, although it is not really fair to compare them too much. Again, like some places we had seen, the mosaic work was incredible, and captured the light amazingly. The blue of the tiles (hence the name) was stunning and it was quite the sight. 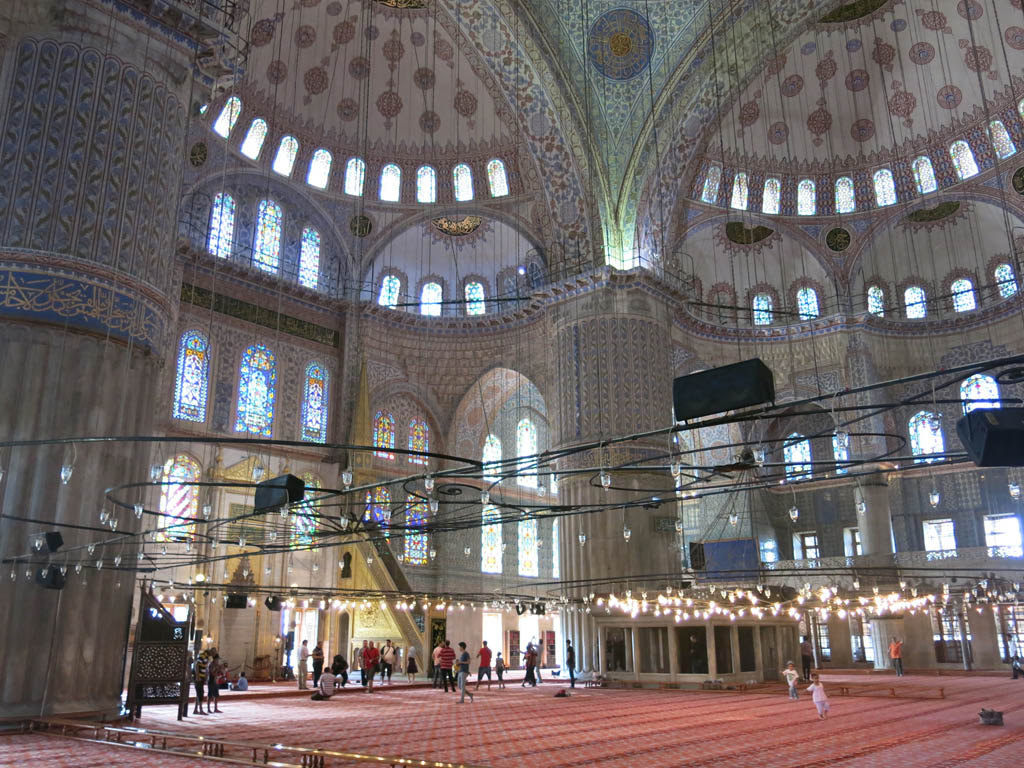 clearly off limits for tourists

There was also A LOT of tourists. But that is to be expected when visiting one of the most stunning mosques on the planet I imagine.

We then wandered through a bit of the same town as we had seen, on the Hippodrome, past Aya Sofya, through the Grand Bazaar. It was like we were in a different Grand Bazaar, such was that we saw hundreds of different shops. Given there is about 4000 sellers in there, I shouldn’t have been surprised. 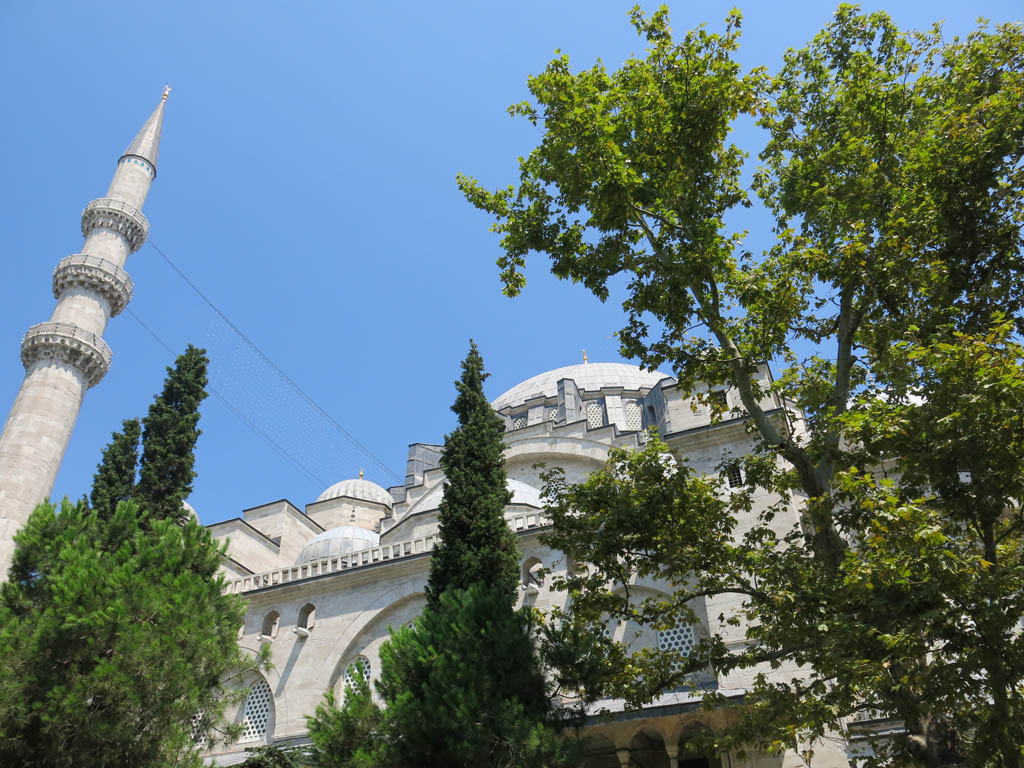 another mosque hiding behind the trees

We stopped for lunch just near what is actually the largest mosque in Istanbul, Süleymaniye. In many respects liked this more than the Blue Mosque. It was just as picturesque, however very few people which made the experience much more pleasant, and gave time to soak it in a bit more. 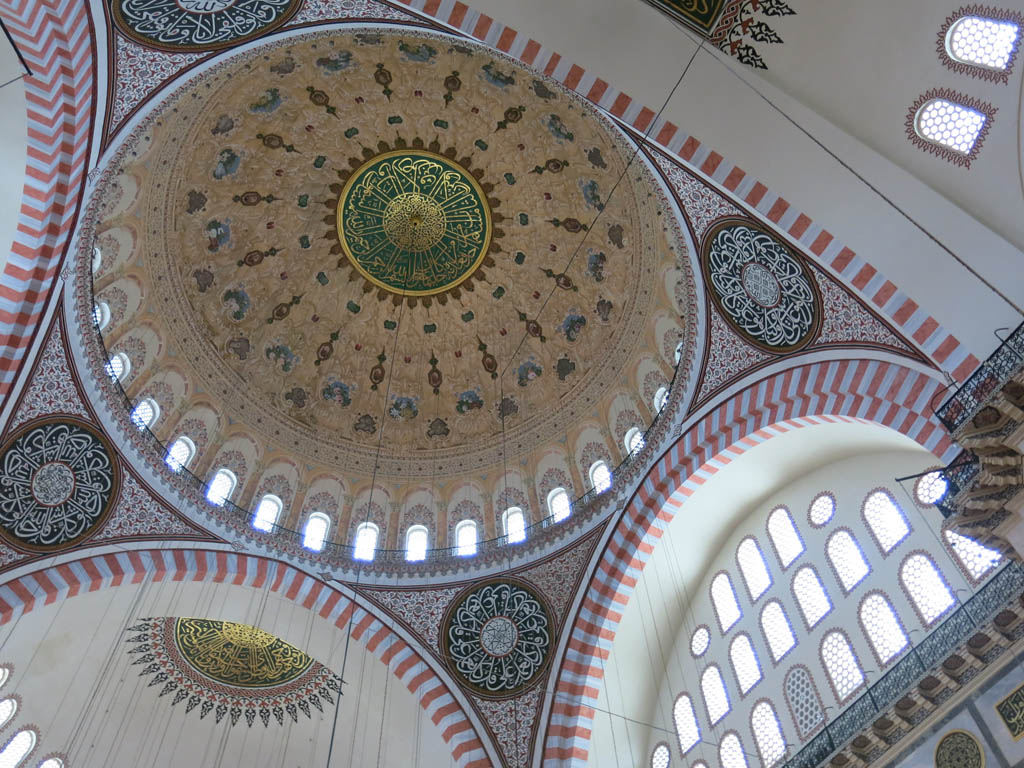 the colours are amazing

While it was of a very similar style, the inside was again just as incredible. 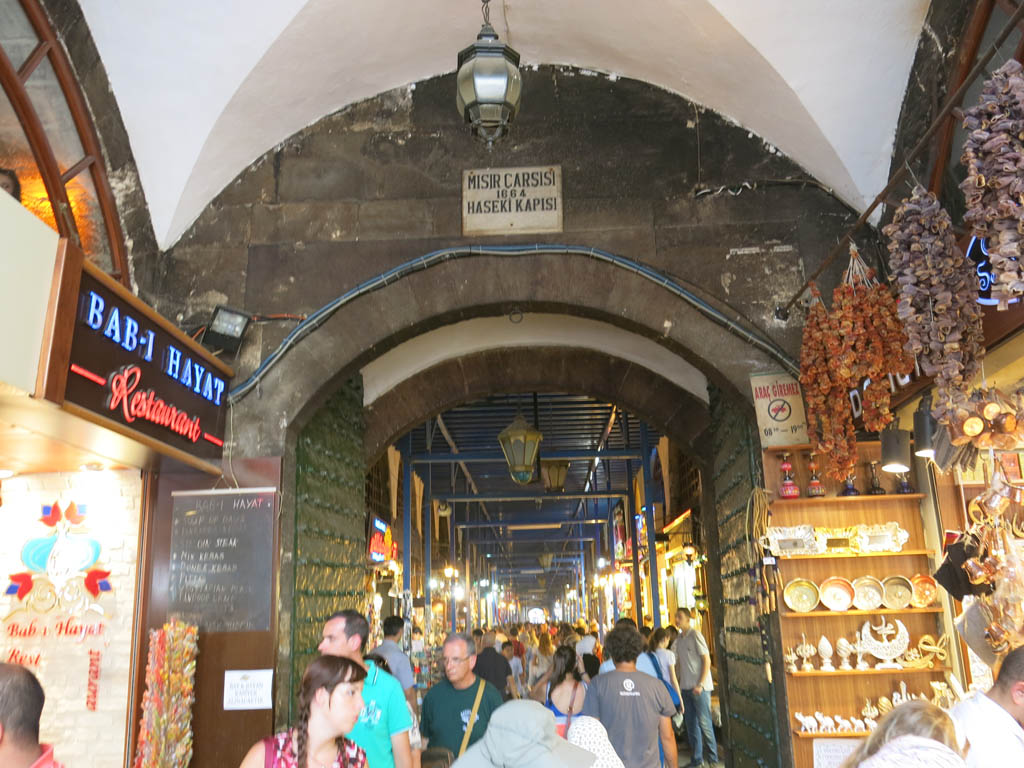 into the spice market!

Some delicious kebab later, we were off again, heading towards our bus to head out of town. Before doing so though we headed through the Spice Market (Misir Carsisi), a much smaller market, with a focus on tasty treats, such as exotic spices, teas, and best of all sweets. 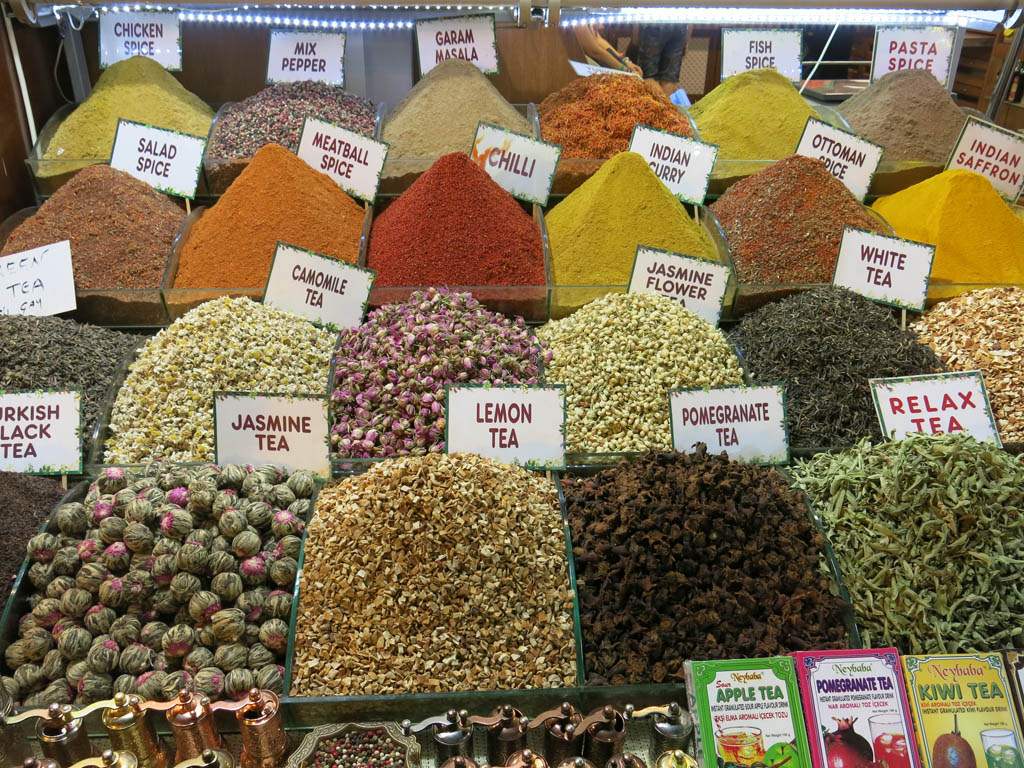 We visited one of the vendors to get a run through of his amazing Turkish Delight. Oh man, it was incredible. I could not leave without grabbing some Pomegranate Turkish Delight for our travels. 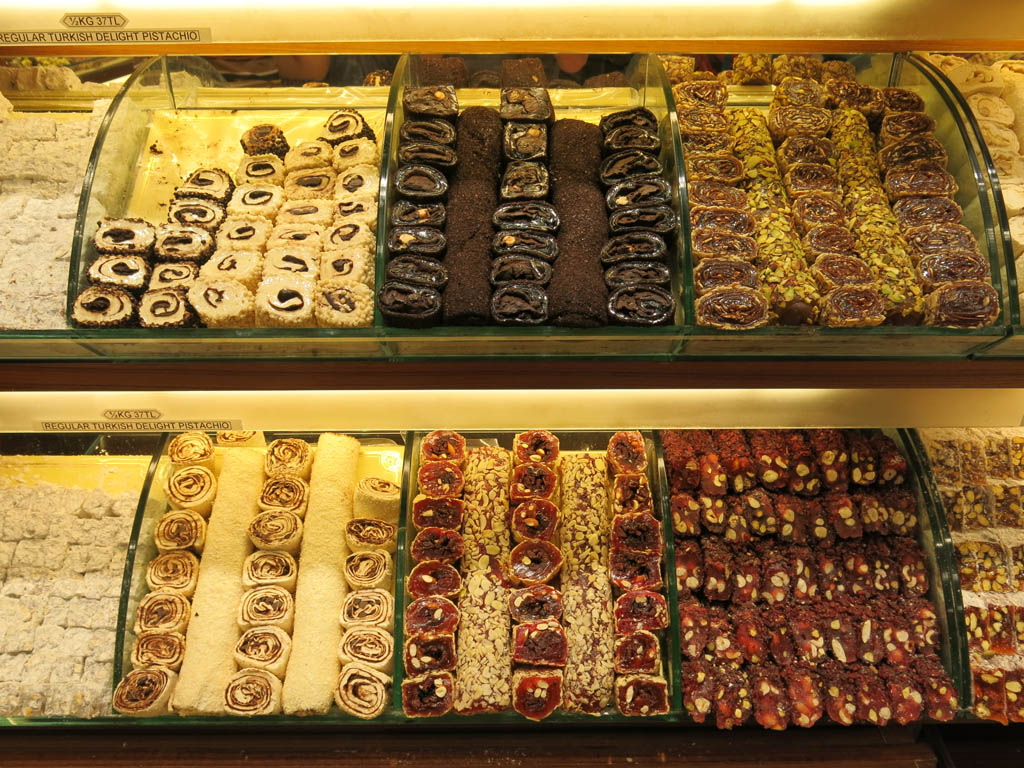 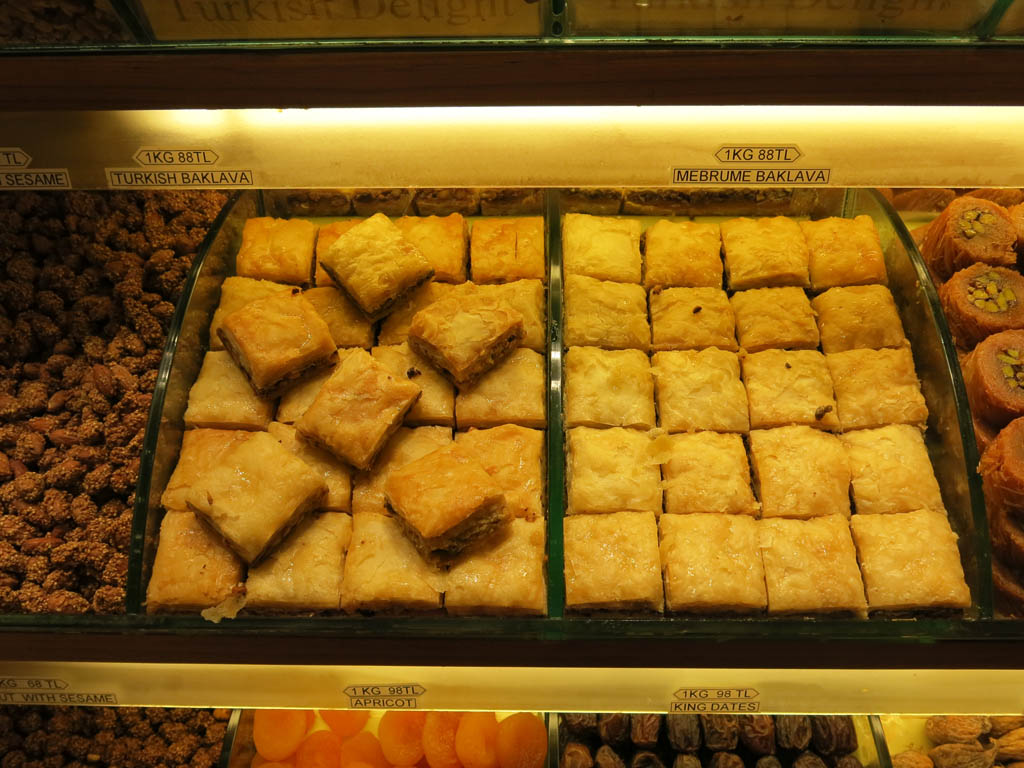 I could have spent all my money on the delicious sweets, but decided I would have plenty of time to eat all the sweets the country has to offer, so left it at that.

And with that, it was onto our small tour bus and time to head out of Istanbul. We jumped aboard at the waters edge, which we planned to come back to on our return at the end of the tour. A ferry on the Bosphorous would have to wait.

There is not much to add for the rest of the day, as a 5 hour drive took us to the Turkish capital of Ankara. As we left Istanbul, we crossed over a bridge where we officially went from Europe into Asia, where we would be spending the rest of our trip. It is a bit of a spin out as I always associate Turkey with Europe, when the vast majority is in Asia. This sure was both a long way to get to Asia, and also a rather quick one.

It was quite late when we arrived, so there was not much to see, rather only time for some drinks with the crew and then bed time.