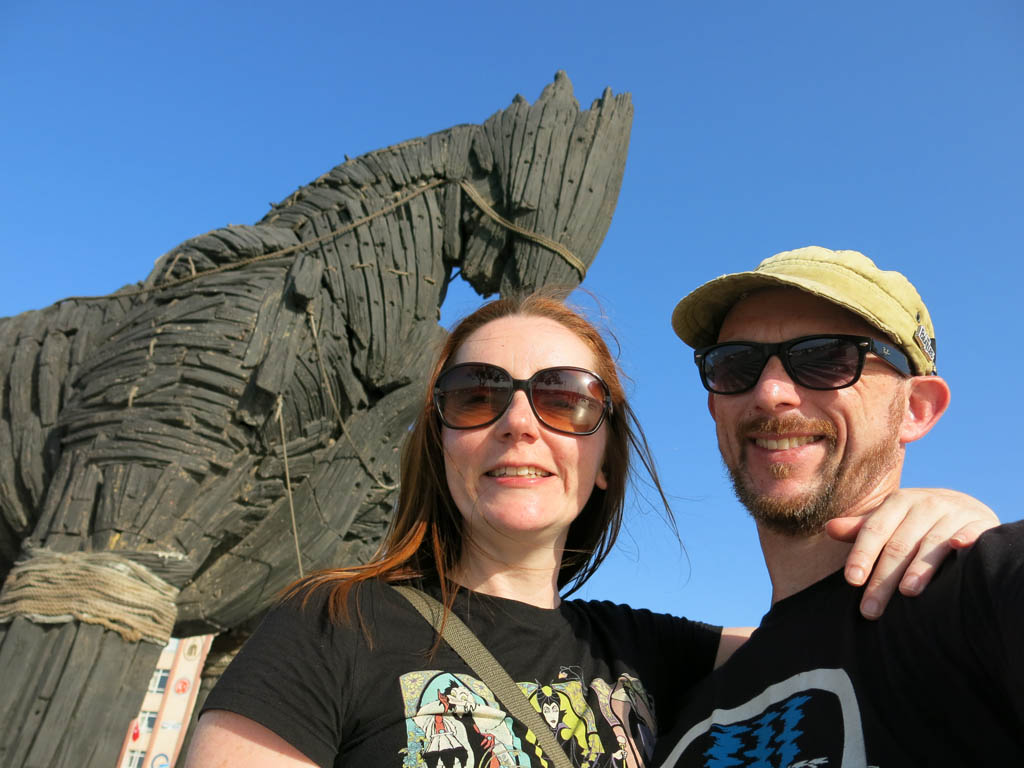 us and some random wooded horse

It was dawning on us all that the end of the trip was fast approaching. In only a couple of days our two week Turkey adventure would be all over and we would all be going back to whatever normal lives awaited. Well, some were heading to the other side of Turkey on another G Adventures trip, but most were winding up their holidays and heading home.

But today, another major archeological site was on the itinerary… Troy. Yep, that Troy. No, it’s not in Greece as many think it is, but rather just near the coast, near the seaside city of Canakkale. So yet another slow morning (which was alright by us) meant that we reached our first stop about lunchtime.

Troy was a pretty exciting one for most of us, given it is such a famous story. Even those that didn’t know all the detail at least knew the general gist of things… beautiful woman, big horse, fighting, Brad Pitt. So we were all geared up to explore the site. 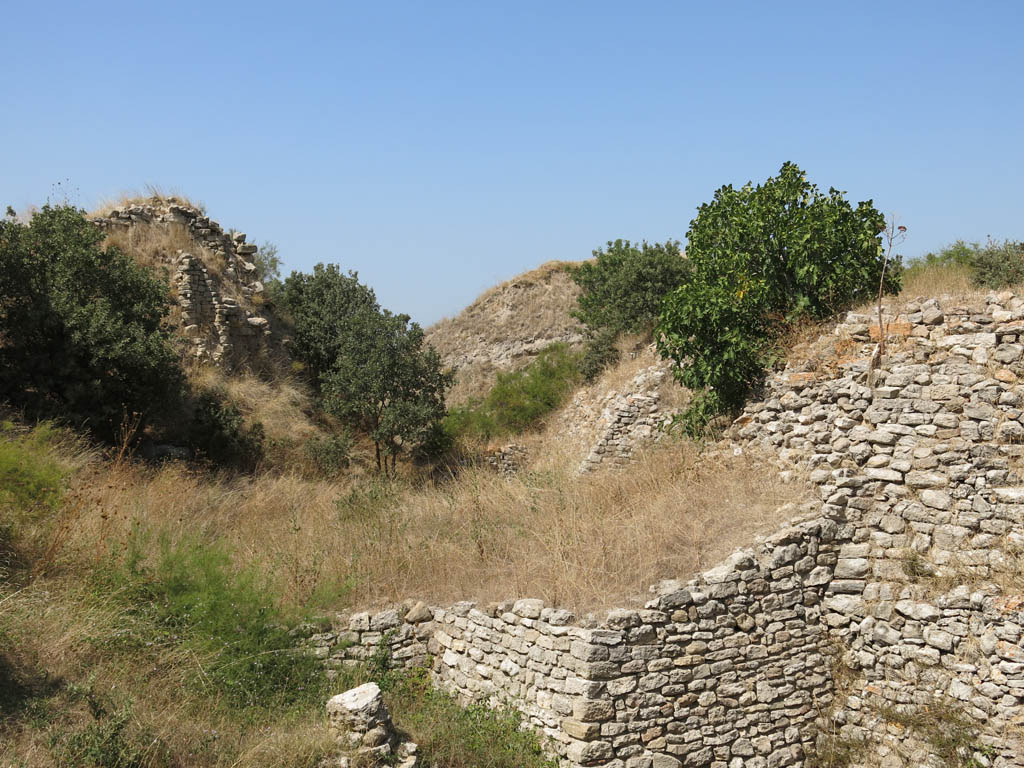 the less spectacular ruins of Troy

Ibo was our guide and spent the next hour showing us the site and telling us all the stories. It was great that we had him, as unlike the ruins of the past few days (especially Ephesus and Pammukale), this was quite sparse. in fact there wasn’t really a whole lot to see. 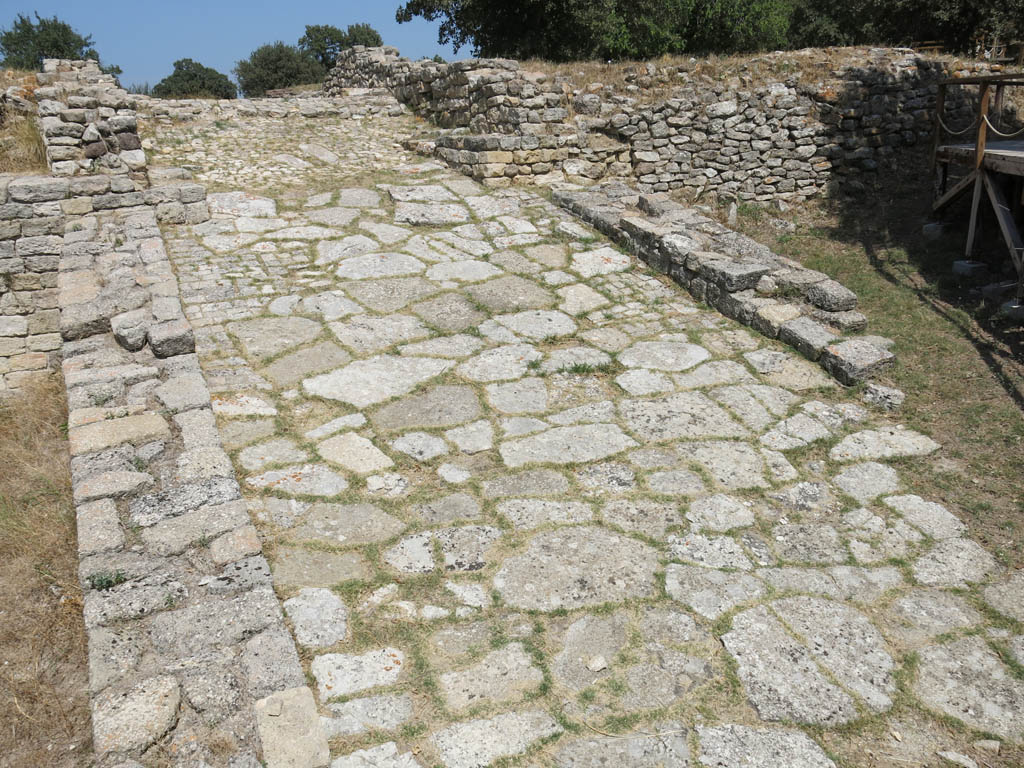 a gate into Troy

The main path takes you about the site, and points out ruins from different stages in Troy’s history. There was in fact 9 Troys that have existed, all built on top of each other. As you go, different ruins are showing from different periods, but it was nothing like the ruins of the other cities we had seen. 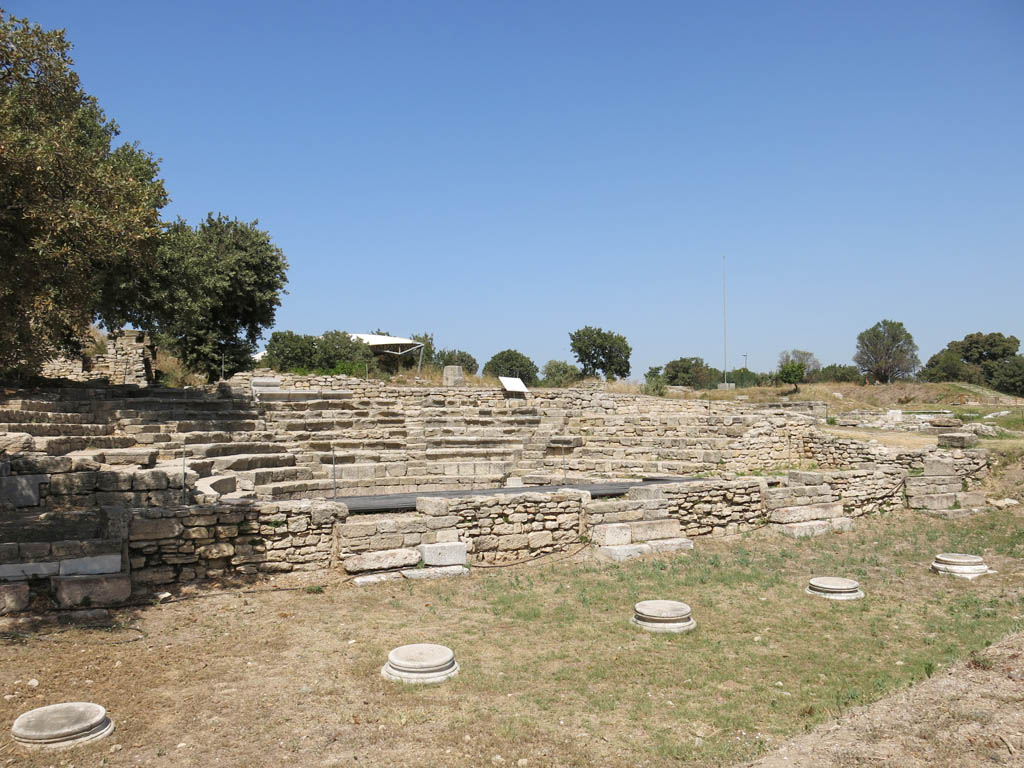 It wasn’t that it was a let down, more anti-climactic. For a site with such a rich story, there is actually not that much to see. It was great to go to the actual site, but in terms of spectacle, we had been spoiled by this point. 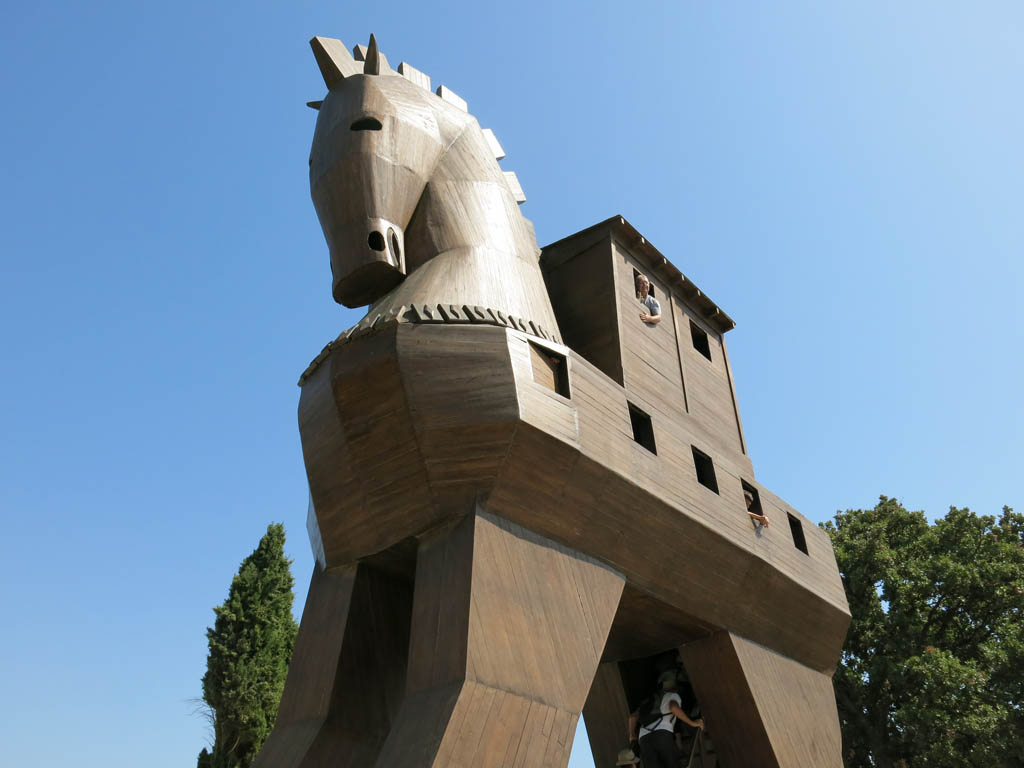 Of course there is a big horse though. What did you expect? Kate and I climbed to the top to get our cheesy photo. 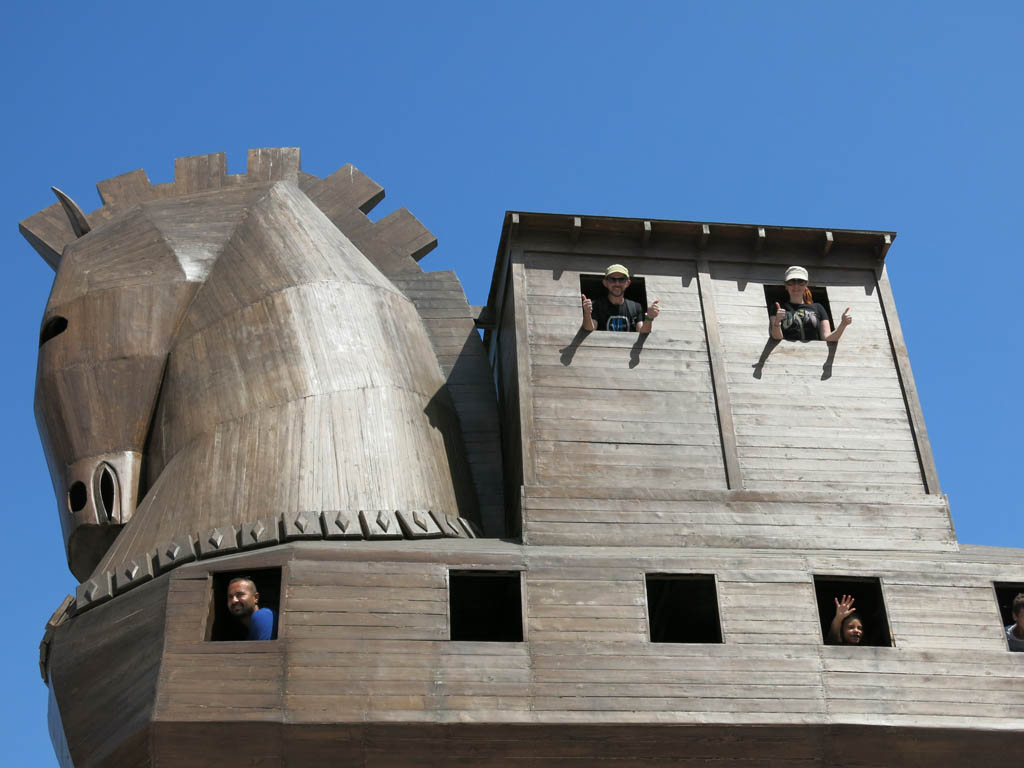 clowns inside a big wooden horse

We also took the opportunity to dress up in Roman garb and get some more cheesy tourist photos. Alas I don’t have them handy to show you sorry readers. You will just have to wait. 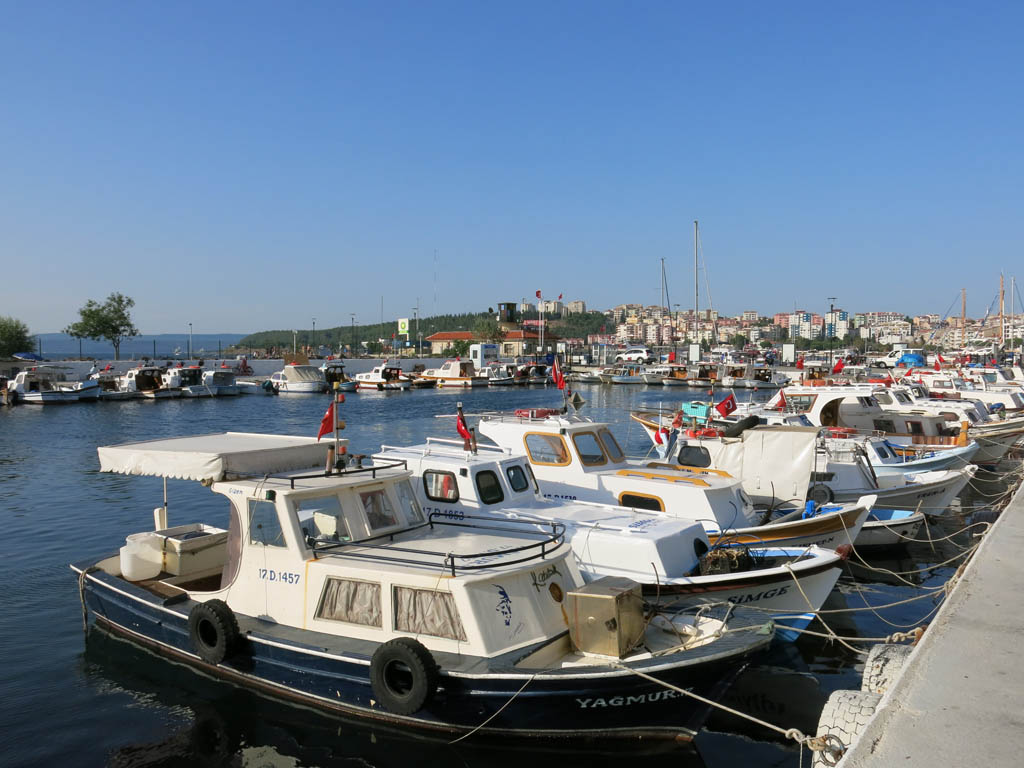 From Troy, we made our way into the city of Canakkale, what would be our gateway back to Istanbul tomorrow. But for the rest of the day we had time to relax and explore. Canakkale is a university town mostly, as well as location for ferries and more beach. Kate and I just wandered the waterside, looking for ice cream. 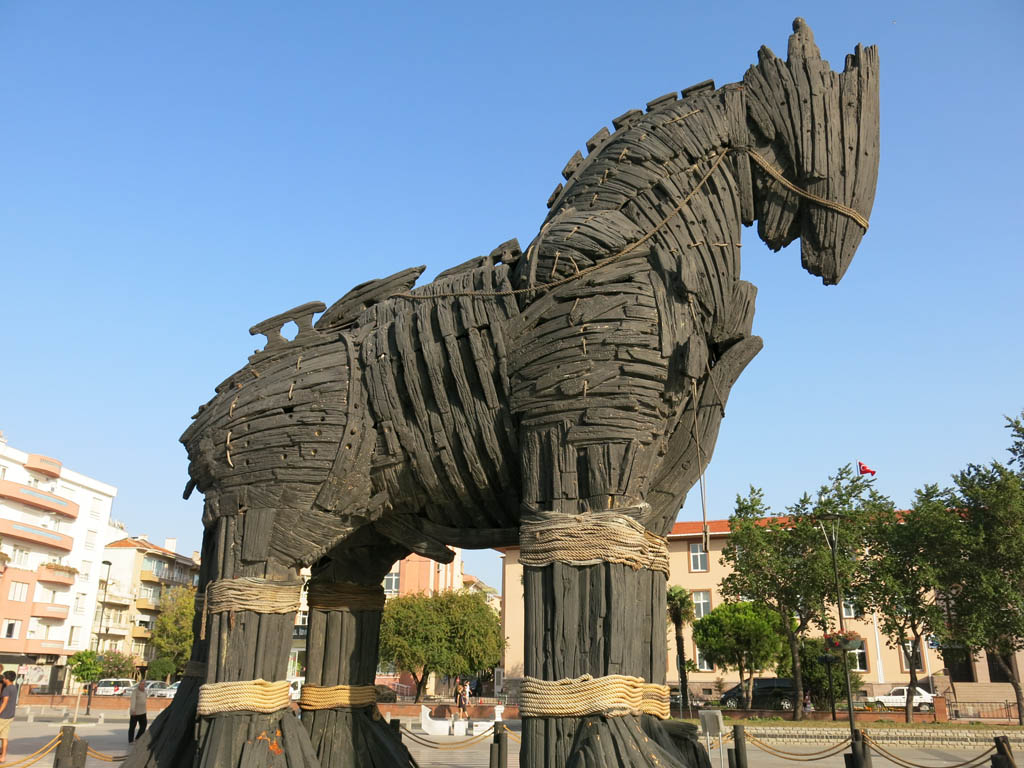 this one looks cooler, but alas, no place to climb in

Also on the water is another wooden horse, this one actually a gift of Warner Brothers. Yep, it was the wooden horse used in the film. This one looked much cooler than the one on the actual site, although you couldn’t climb in it. I guess we are to assume the soldiers are still hiding in there.

Dinner time had arrived, so it was time for some more seafood, especially since it would be back to the city tomorrow. Many of us continued to hang out for the evening, heading to a live music bar called Hayal Kahvesi. It seemed everyone (except us) knew all the words to all the songs. But it didn’t matter, we all rocked out for a bit, enjoying our penultimate night together and then calling it a night in preparation for a long, busy, and emotional day tomorrow.