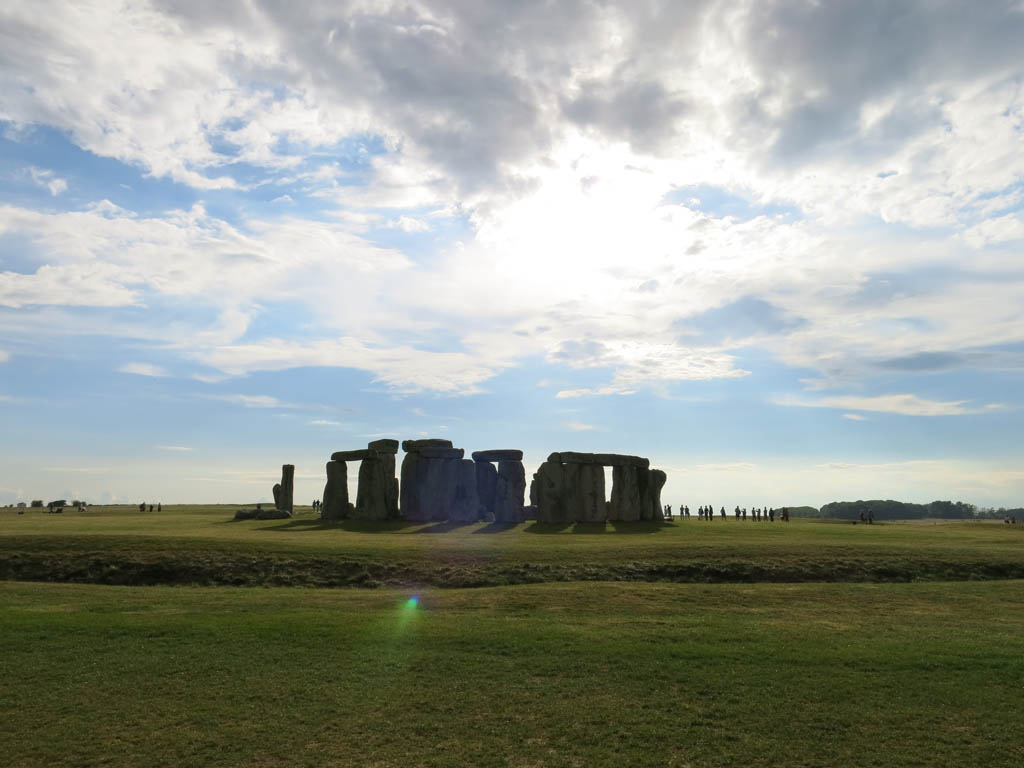 I love me a good Spinal Tap reference!

Anyway, when we left you last we had witnessed the penultimate Monty Python show and were spending the weekend with Kate’s aunt and uncle. Sunday morning we were treated to a brunch with Kate’s family before we had to motor off to Heathrow. Heathrow again?! This time it was nothing to do with departures or arrivals, rather it was the most convenient place to pick up our hire car. So off we went, found our vehicle, and job done!

Well, not quite. Rather than head straight back to Coventry, since we were to the west of London, we decided to visit a classic landmark that neither of us had seen in years… one that people fall in love with, or ask “why did I bother to come and see a bunch of rocks?!”. Yep, Stonehenge.

Thanks to our trusty sat-nav, we arrived in relatively no time, although the traffic got pretty bad as we approached. We had our fingers crossed, as typically you need to pre-buy timed tickets to see the site, however since we had no idea what time we would arrive, we just had to wing it. Thankfully things were on our side (for the moment) and in we were able to go!

The new visitors centre is actually a mile or so from the site, so it was on to one of the shuttle buses to head out. Above us a few clouds looked a bit ominous, but that didn’t deter us… we just grabbed our rain jackets and went. On the bus some rain started to fall, but not enough to stop intrepid travellers like us to get out there. So once we arrived we jacketed up and went to the stones. 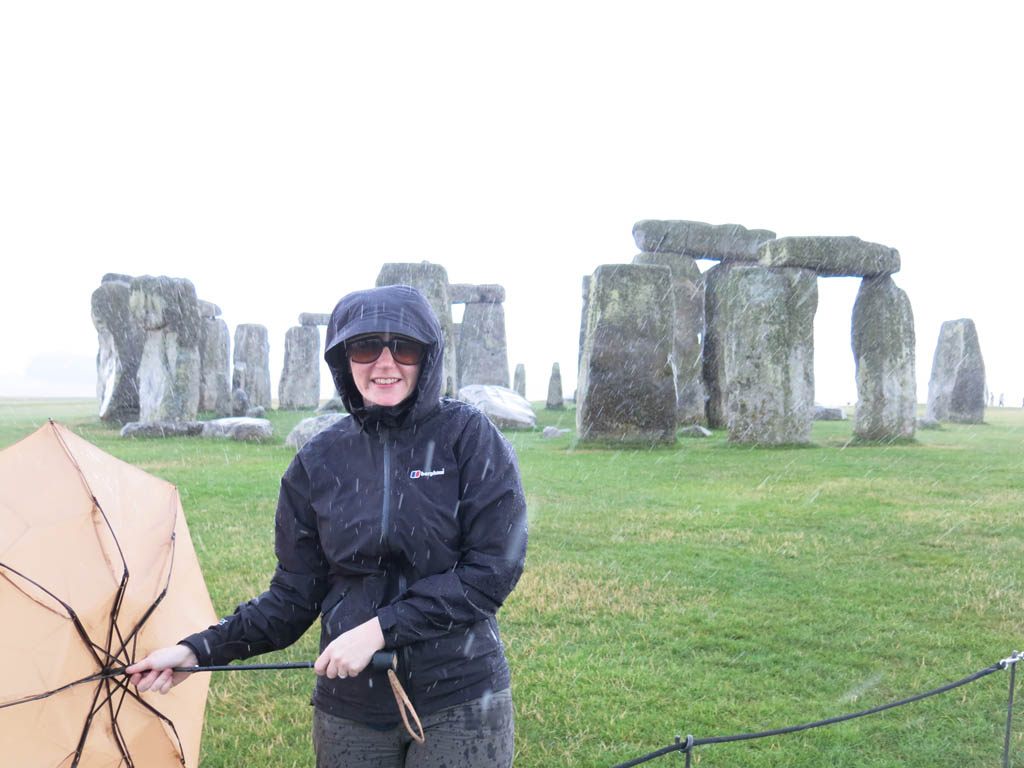 It was at that precise moment that somewhere some druids took umbrage with our arrival and called on the rain gods, as the clouds went black and the rain bucketed down. Hard. Within a minute we were soaked! But that didn’t worry us too much, as laying eyes on Stonehenge, we were actually pretty excited. 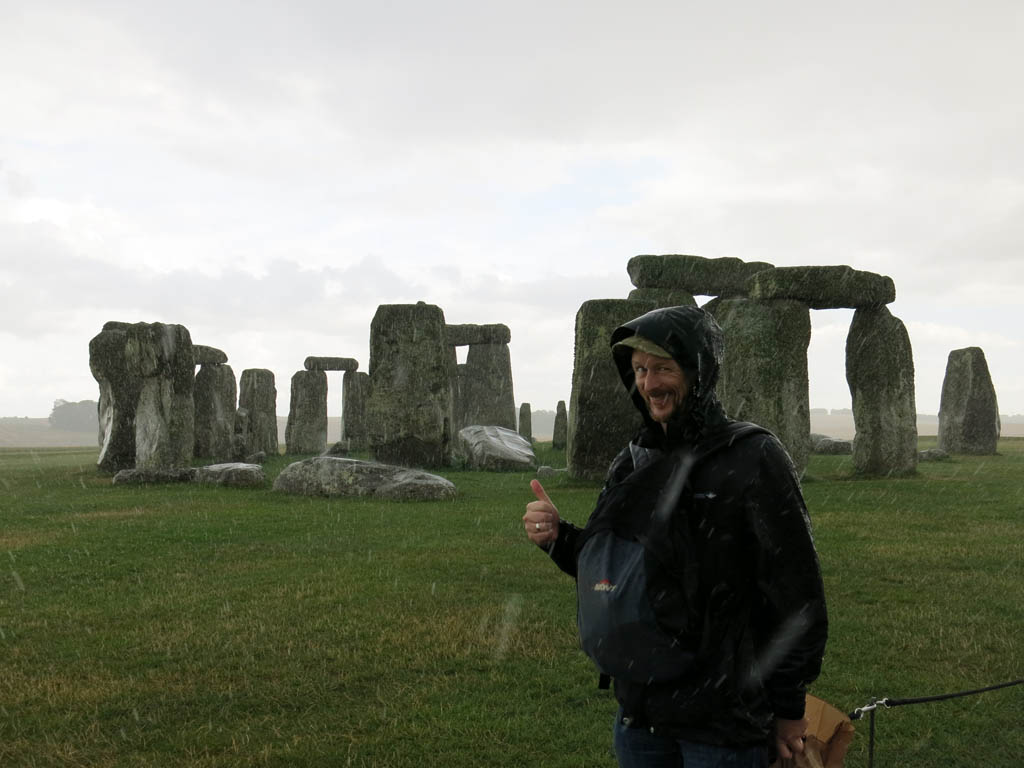 a very damp thumbs up

We both remembered being further away, so to get within a few metres was very cool. We made our way around, in the driving rain. Trying to take pics actually became pretty comical as clothes were soaked, cameras drenched, and umbrellas turned inside-out. Crazy! But like the handful of others still out at the site, we figured we were already soaked and had no idea when we would be back, so took it all in. 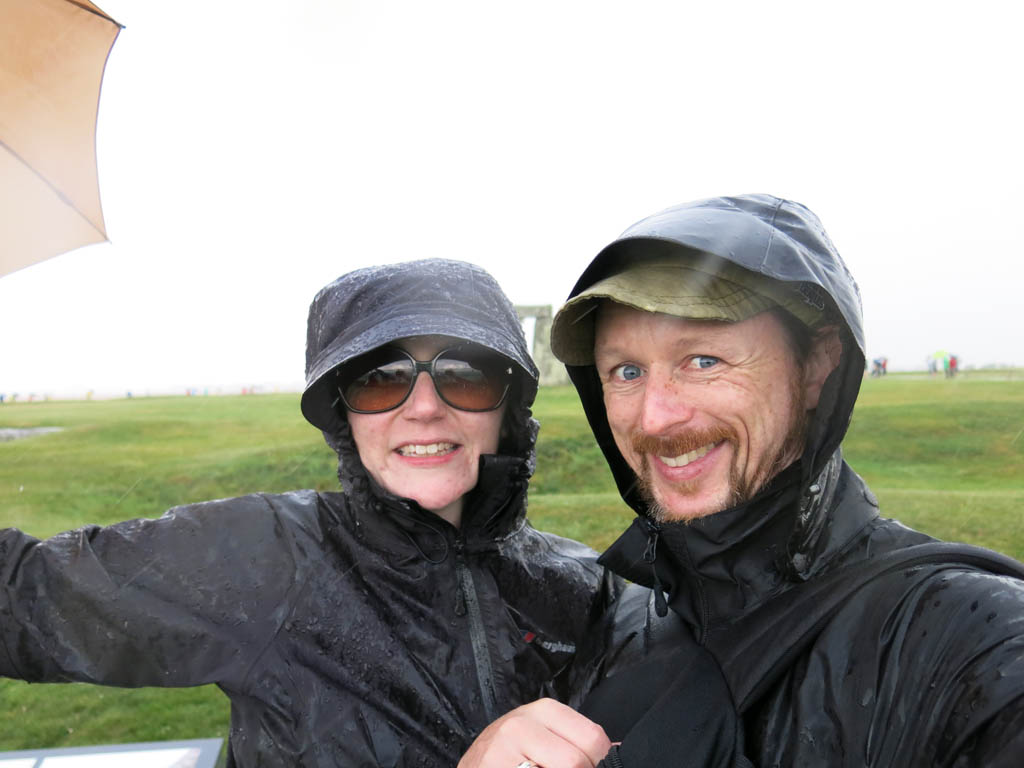 Getting the selfie was quite tough… keeping a camera relatively dry was hard work in those conditions! But as you can see, we thought it was quite hysterical that to this point in the day it was balmy and warm and sunny, and that the second we arrived it was torrential. That’s England for you I guess.

So with Stonehenge visited, we thought it was best to get back to the Visitors Centre and dry out a little. As things would have it, we were back for all of 5 minutes when the rain stopped and sun started to peek through the clouds. Aaarrrgghh! But we just thought it was pretty funny. Kate suggested heading back to the site to see it properly and take our time. After a little deliberation, it was back on the bus out to the stones. 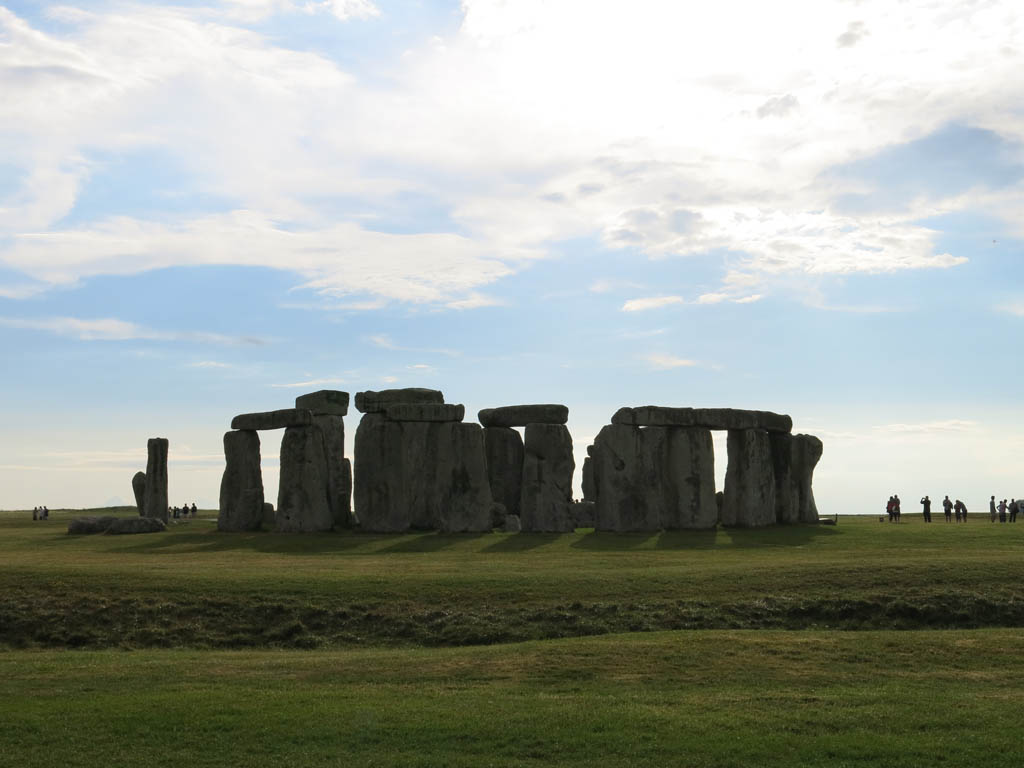 this was just 15 minutes later

It ended up being a great decision. There was not another drop of rain and it gave us a chance to dry out a little. We had time to be casual, and listen to the audio guide to hear all about the druids, the astronomy, and all the history. Sadly Spinal Tap were not mentioned at all (not even in the gift shop either!). What a wasted opportunity. 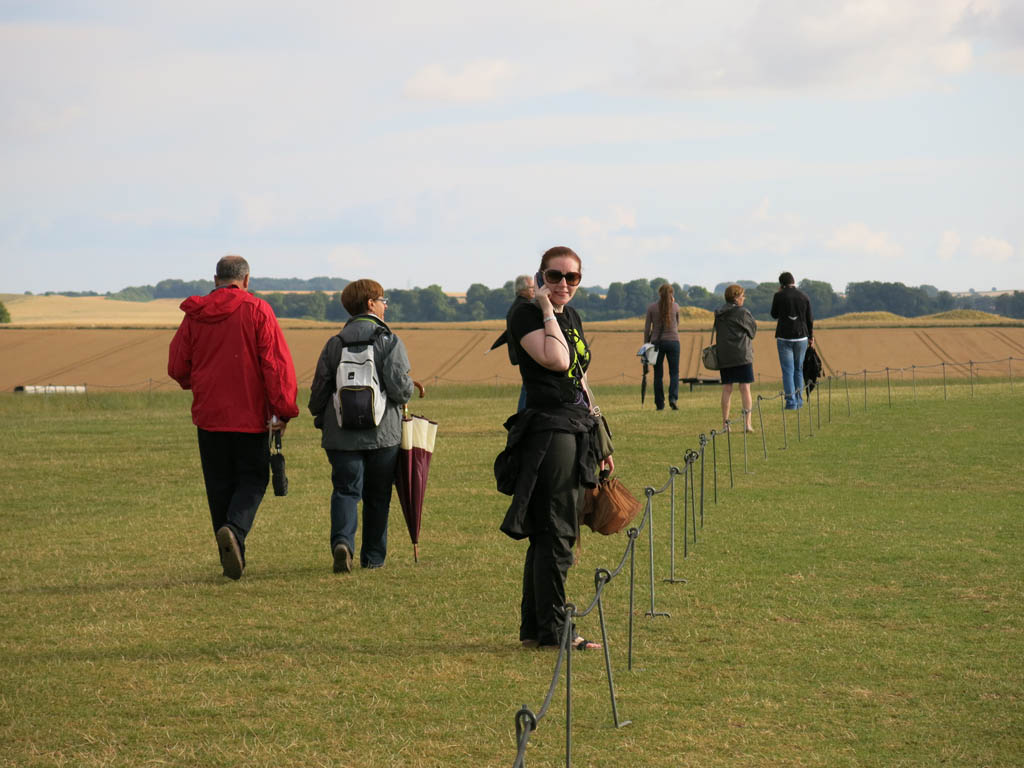 kate listening to stories of the druids (not spinal tap) 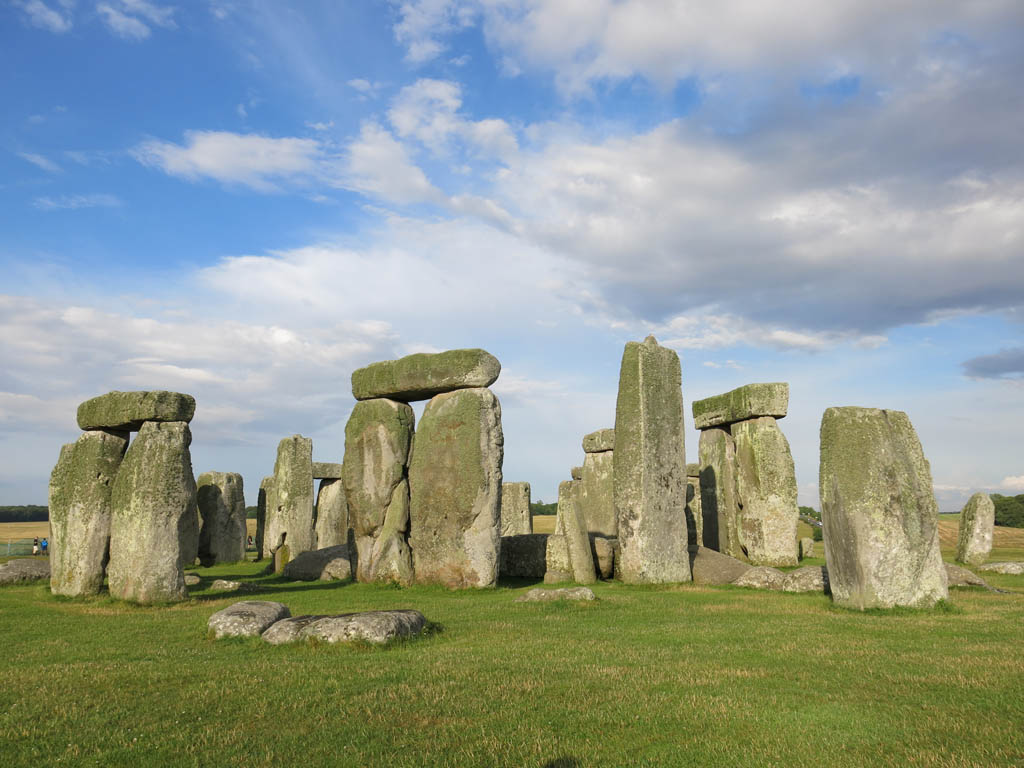 i’m sure the druids knew what they were doing

We ended up spending quite a bit of time. Given the rain, and that it was getting late (7pm), there was hardly anyone about, meaning photos with no people were a possibility. We snapped away, and looking at the pics it seemed we had a lot of the same pictures of a bunch of rocks, but it was very cool nonetheless. 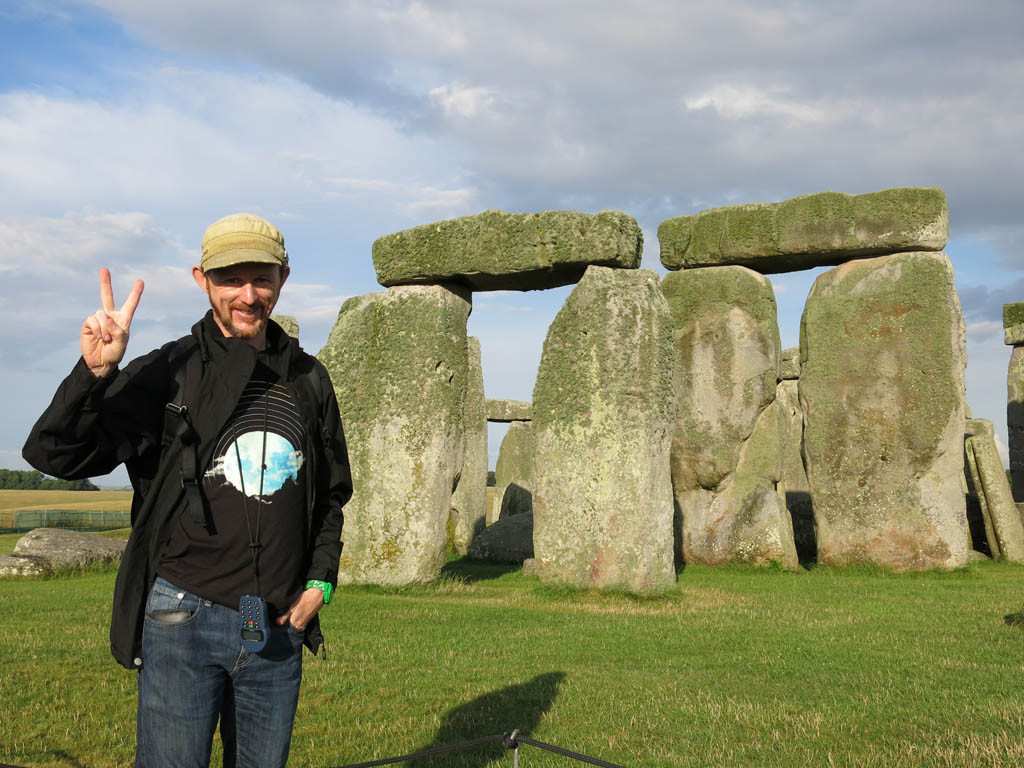 But by this time they were getting ready to shut up the site. So back on the bus yet again and we were at the visitors centre. We poked around the exhibition, but by this point we were done and it was time for the longish drive back. In the end those druids were looking out for us after all.