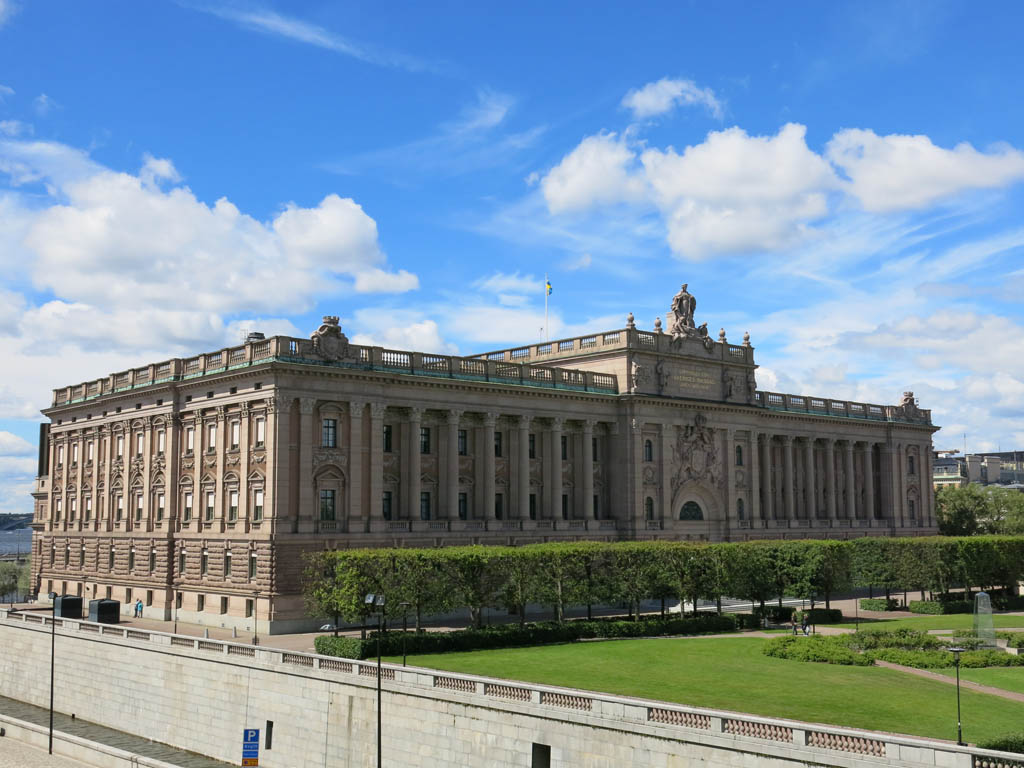 I have been fortunate to visit almost all the big Scandinavian countries to this point (Finland will complete the set in a couple of months), and I must admit, that while I have loved my visits to Norway, Denmark and Iceland, I found their capitals a little underwhelming. Copenhagen I didn’t mind, but don’t reflect back on with any strong feelings. Oslo I just didn’t really care fore. And Reykjavik I liked but is just a big country town. But this changed today.

As hinted at in my last post, today I decided to jump on a train and head into Stockholm to explore the Swedish capital. A good 8 hours sleep had me fairly refreshed, and raring to go pretty early, so by about 9am I was in the centre of the city. With almost 100 major museums and lots of islands to explore, I had a bit of a plan based on some reading and advice, so started to wander in the direction of my first museum. 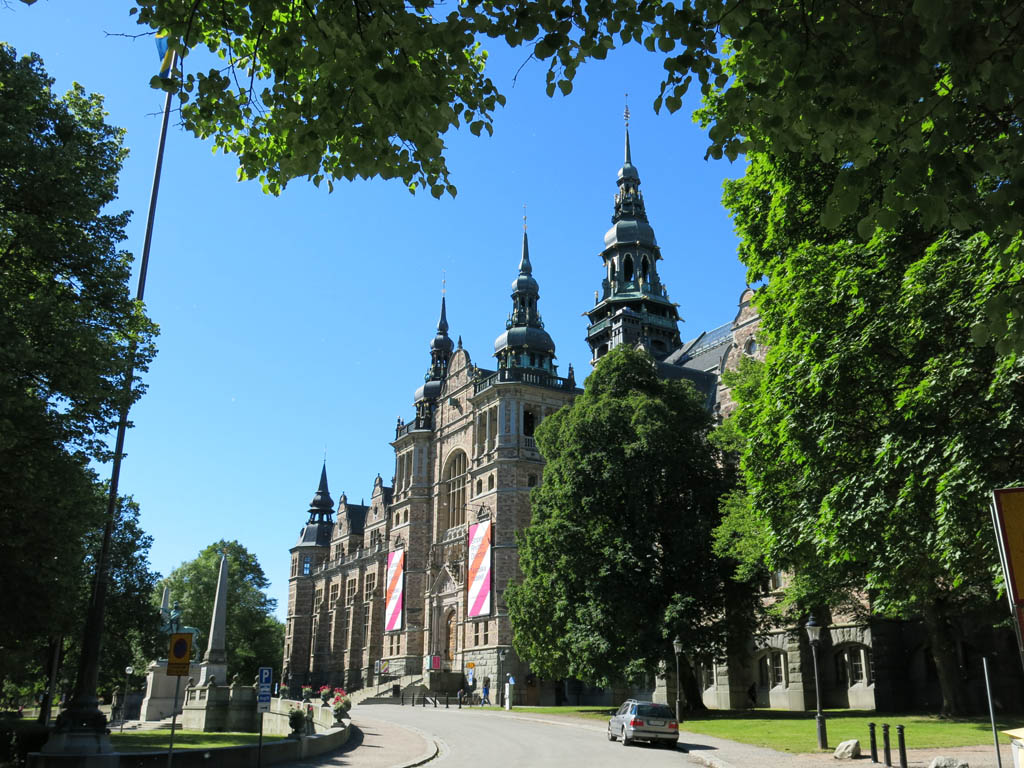 a new museum at every turn

What grabbed me was just how amazingly gorgeous the city is. The combination of a bright blue sky and the old buildings and waterways made for a postcard at every turn. The casual wander from island to island was the perfect way to start my trip in earnest. 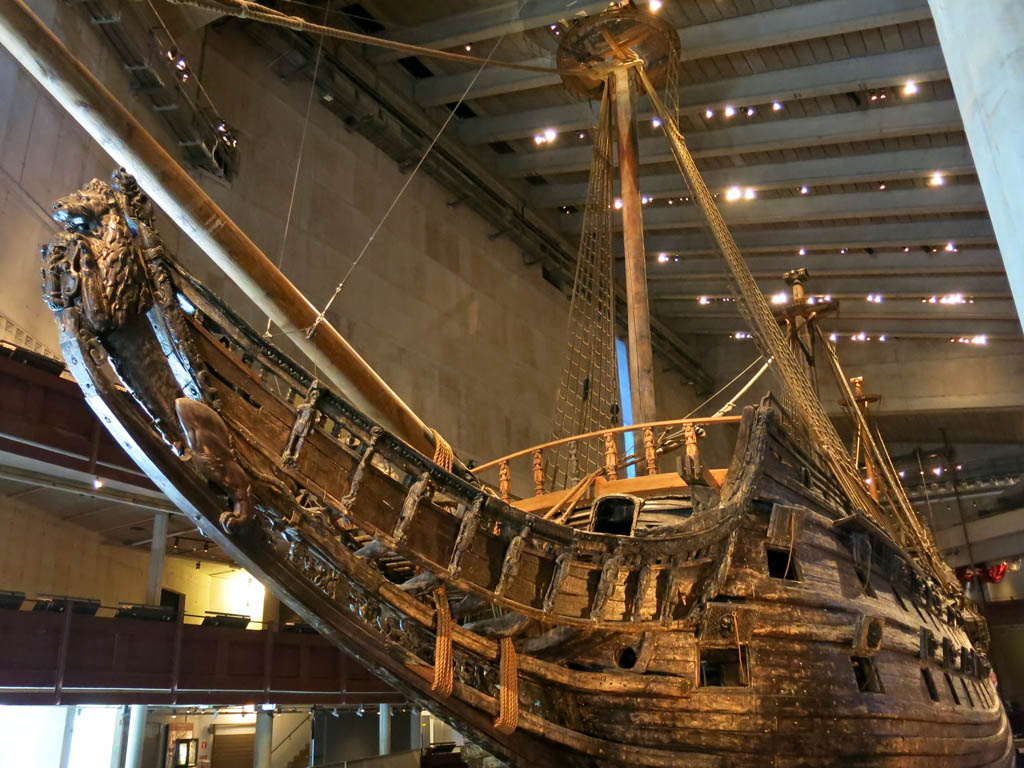 My first stop was the museum that has fast become the most popular in the city, the Vasa Museum. This is a museum dedicated to housing the spectacularly well preserved remains of the infamous warship of the 1600’s. The story of the ship is almost too crazy to believe… built by the royalty of the time to be an epic warship, it sunk only 1km into its maiden voyage, right in Stockholm harbour. Attempts at the time could not revive it, and there it sat until only 50 years ago, when it was found and retrieved after a process spanning months. 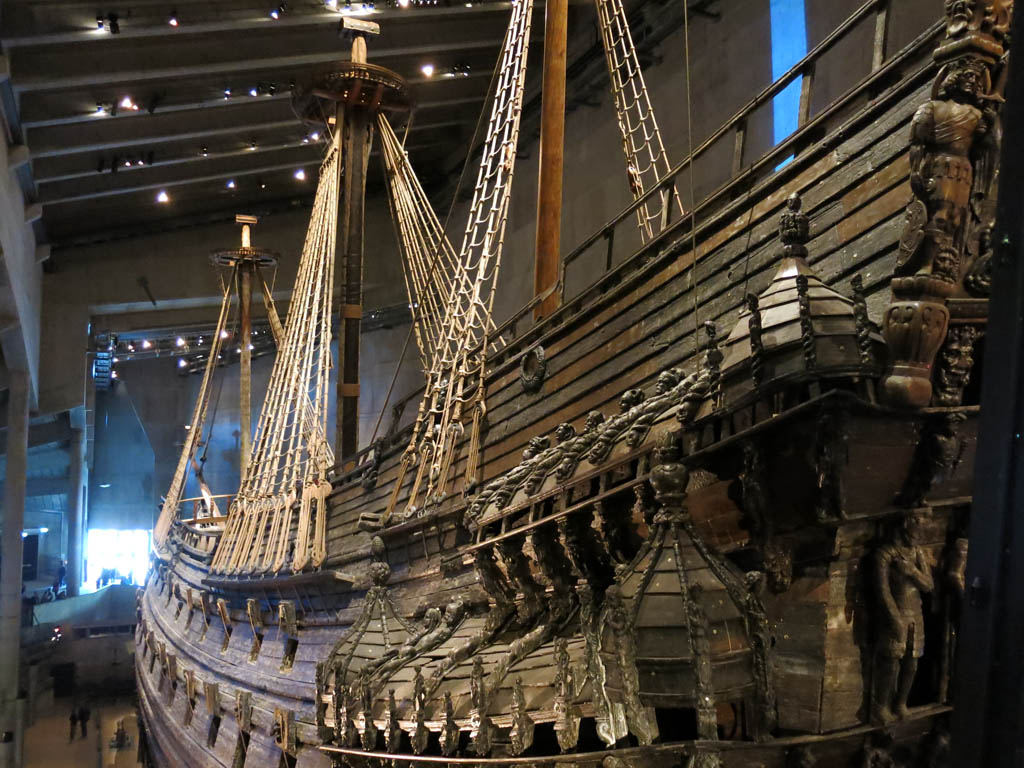 to think it survived 300 years underwater

What is incredible is how well preserved it is. Apparently 98% of what you see is original, meaning I was staring at a 400 year old wooden ship that had been submerged for most of its life. That boggled the mind, and meant that exploring the whole museum was a joy.

The exhibits were great but it was seeing the boat from all angles and heights that took the breath away. As did the also well preserved skeletons of some not so fortunate crew and some quite scary decorative pieces. 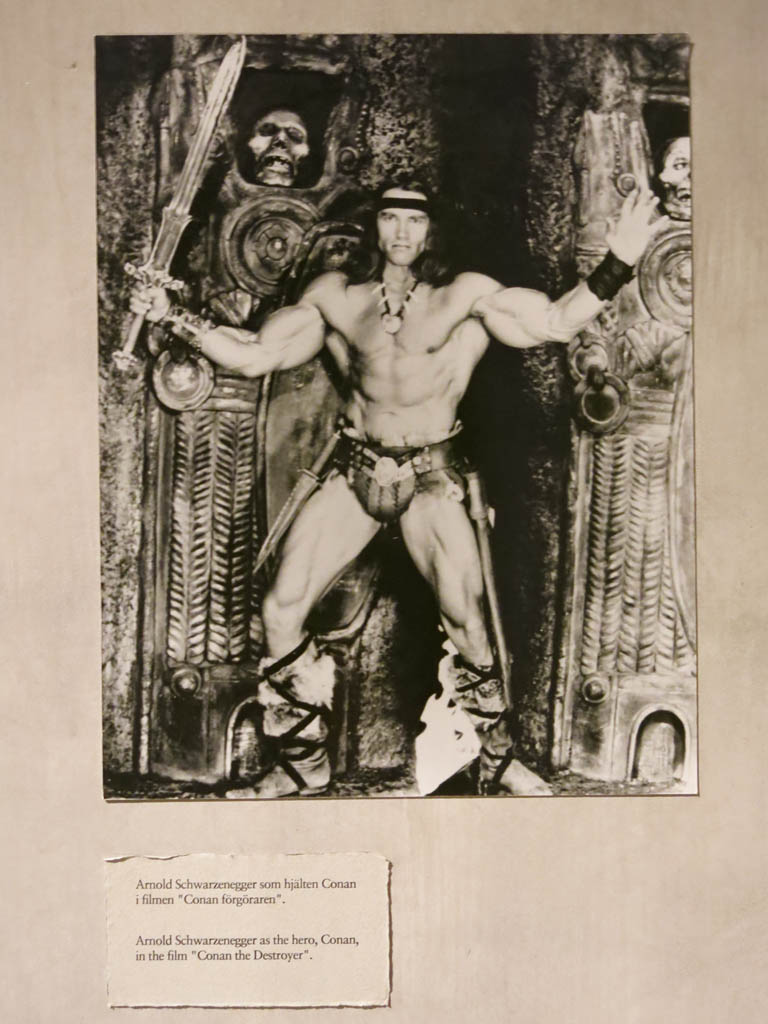 i truly have no explanation why this was in the museum

What was possibly the most odd thing was finding this picture of Arnie in one of the exhibits, and I swear I could not work out why it was there. Must be some local practical joke. 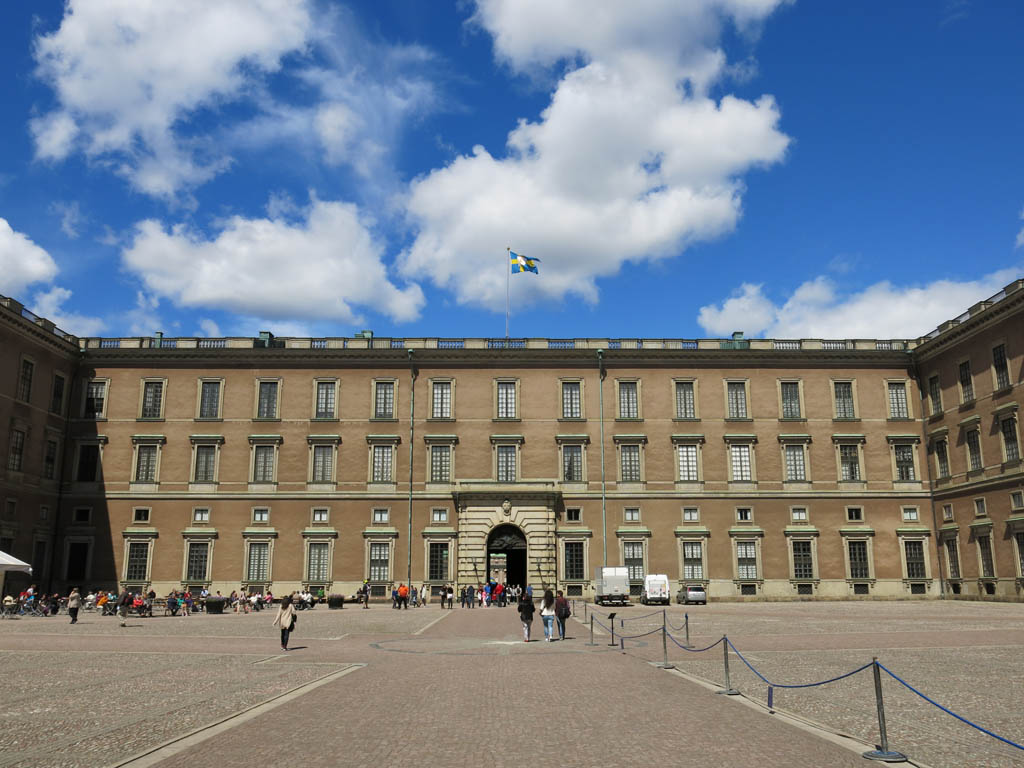 saying hi to the royals

Almost 3 hours slipped away with ease, and with that I decided to wander some more, this time to the island of Gamla Stan, or the old part of town. The most famous of the dozen or so islands that make up the city, this is home to the quintessential old Scandinavian buildings, as well as the Royal Palace. 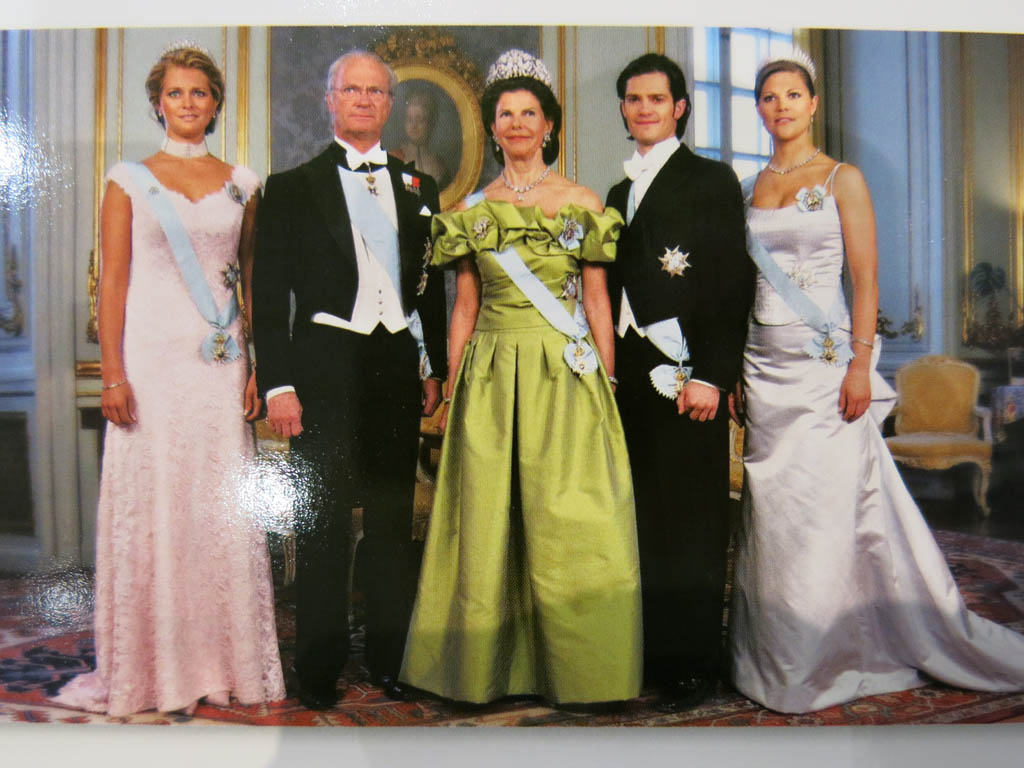 Not one for royalty, I still took a little bit of time to wander in to the public areas for a look. Along with your typical royal guards was a quite odd gift shop with dozens of family portrait postcards. I controlled myself from buying many postcards of awkward poses of the royal family, but will be sure to regret not sending a bunch home for unsuspecting friends. 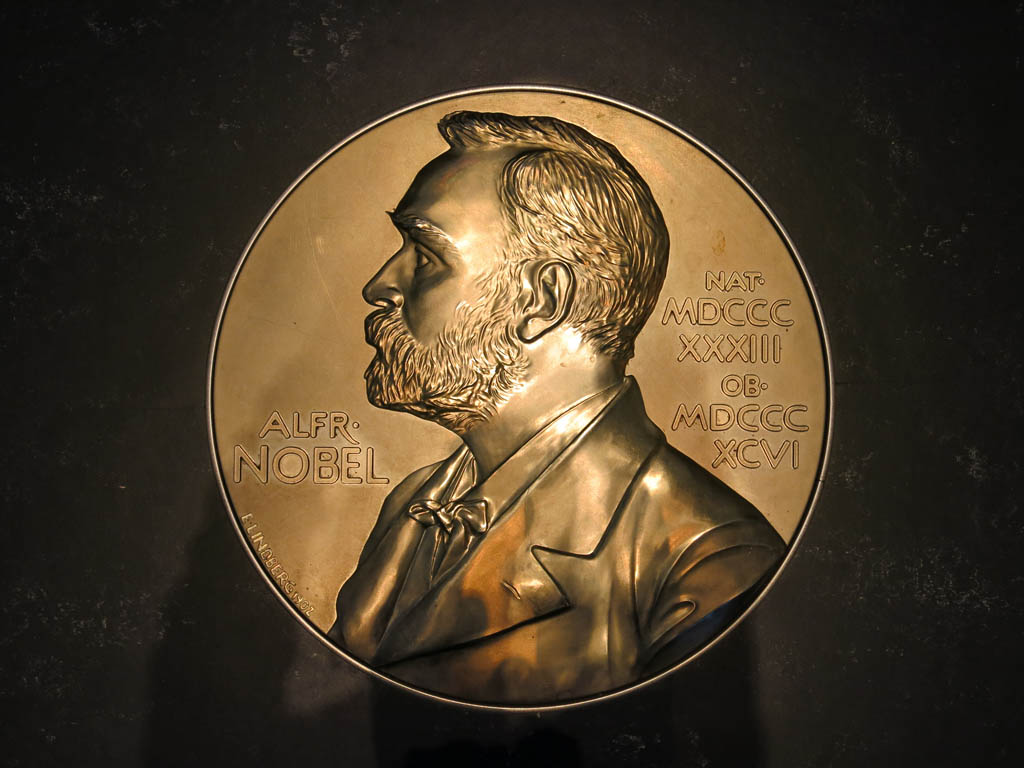 In the heart of Gamla Stan was my next destination, the Nobel Museum. A quite small (and relatively new) museum, this houses mostly interactive displays on the long and esteemed history of the Nobel Prize and its winners. While small, it was well worth the visit to find out a lot more about how it all works and to even set eyes on one of the famous medals. Alas, they didn’t have the 8 million Swedish Krona there that each winner gets. 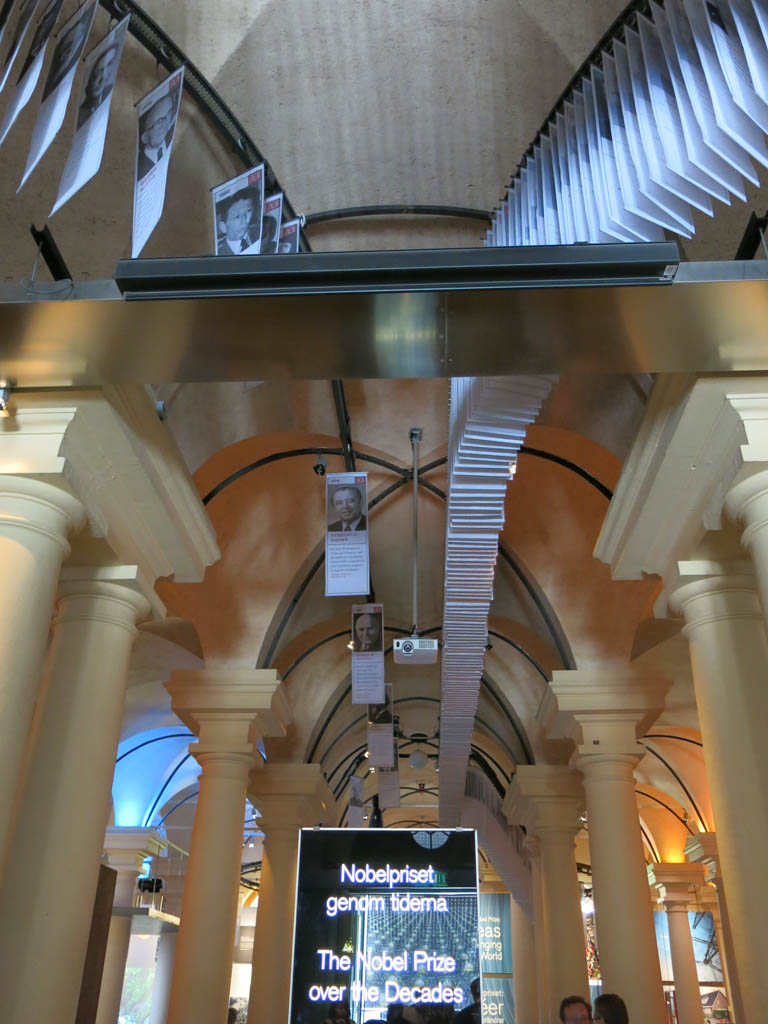 What I did like was that whizzing overhead were banners for each of the over 800 winners so far. As the guide said, don’t wait for your favourite as it takes about 6 hours for them all to make the rounds. I guess the Dalai Lama will just have to miss out then. 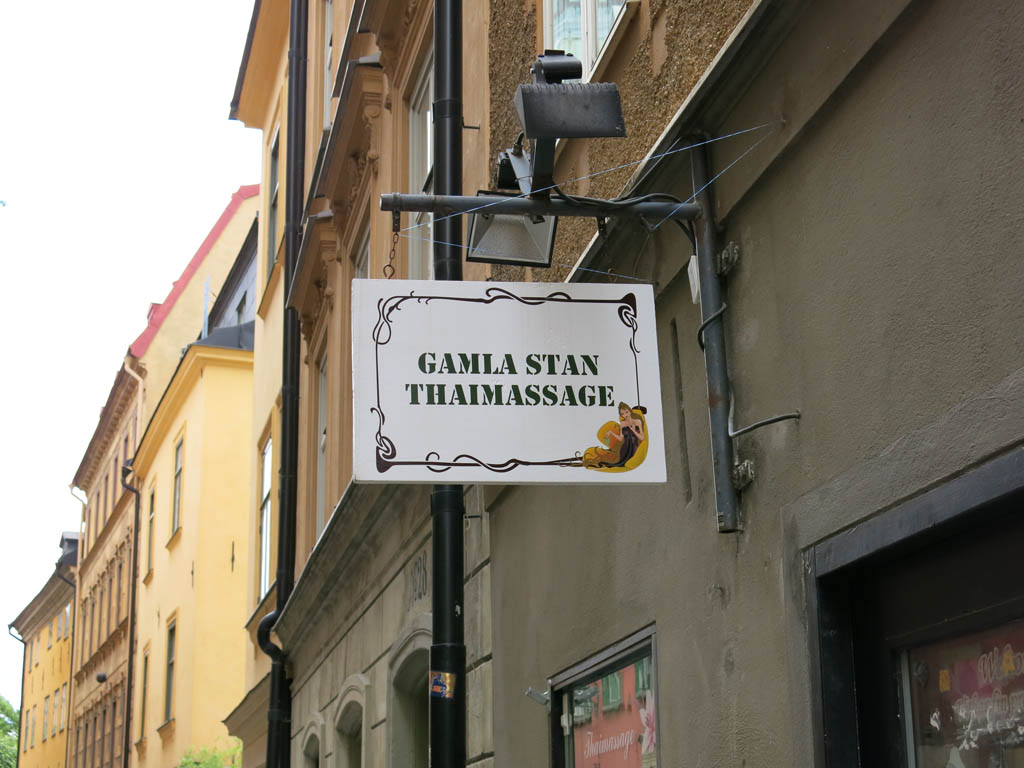 i didn’t realise thai massage was so old

With that, I kept wandering the old town. It was what is common in a lot of historical cities… clearly a lot of history in the small streets, but now taken over my tacky tourist shops which was a shame. And Thai Massage… as every major city needs Thai Massage I guess.

My eyes were firmly on my next prize, one that when I explain it, you will all be like “of course he went there”. In reading about Stockholm and the food, I kept seeing mention of their most famous food truck, Nystekt Stromming. It seemed it was a firm rival in fame to the Reykjavik hot dogs, so of course I had to visit! But unlike Reykjavik, and every other food van I saw in Stockholm, this was not about hot dogs. Nope, this was about the herring.

Now herring is not something that usually endears me, but I am more familiar with the pickled variety, whereas this was of the pan fried type. Their most famous dish was the “skanning”… fried herring with mustard, red onion and dill, on dark rye bread. So one skanning please! 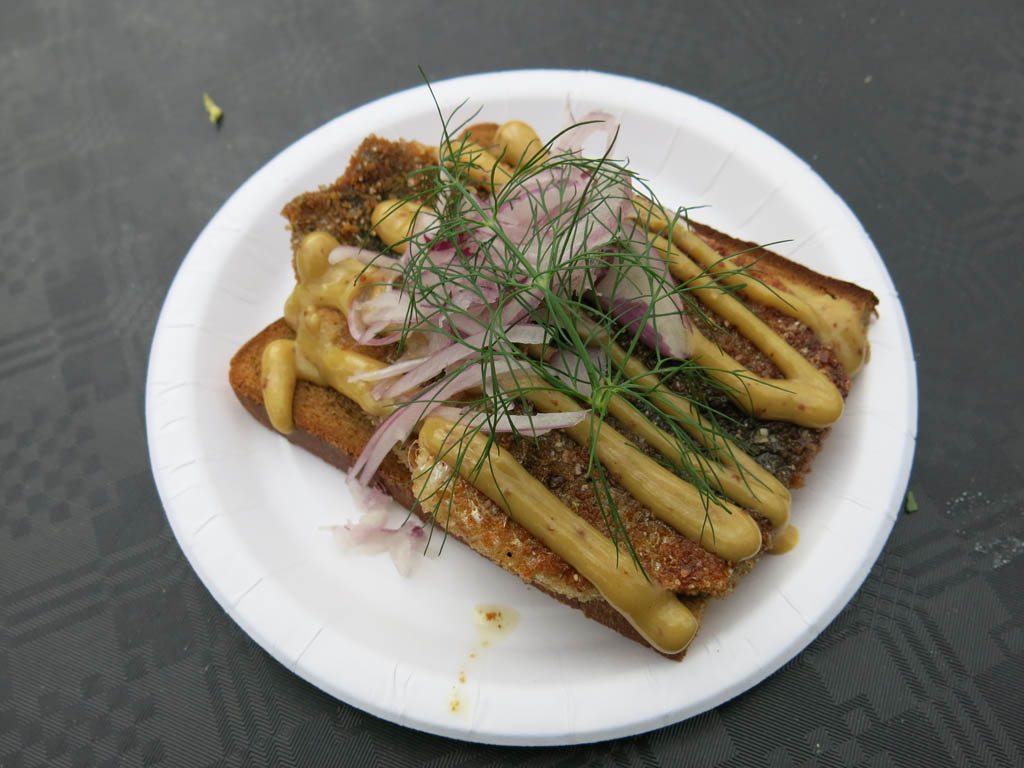 And it was delicious! I gotta say, I super enjoyed that one, so was very happy with my visit to Nystekt Stromming. Definitely a food truck with pedigree! 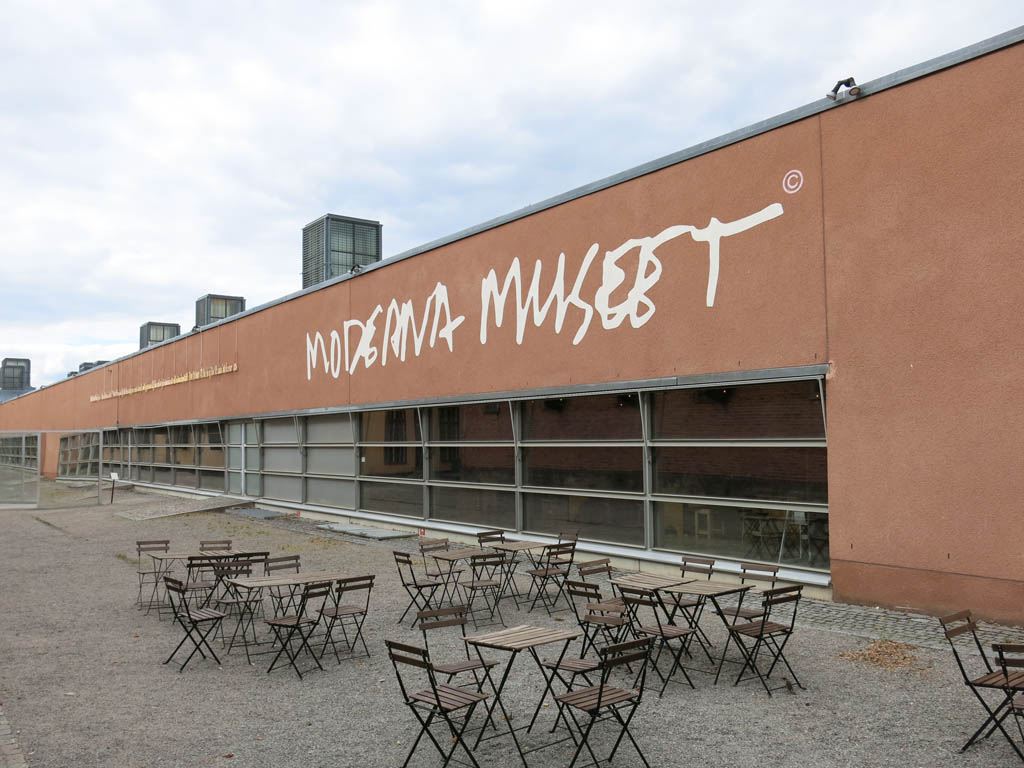 With my belly full, it was off to my next island and museum, this time the Moderna Museet, i.e. the Museum of Modern Art. This was home to a great collection of primarily Scandinavian and European modern art, although it also had some of the other big names (Dali, Bacon, Piccasso, etc). While not huge, it was worth the visit, especially for the chance to become a bit more acquainted with Scandinavian modern art. 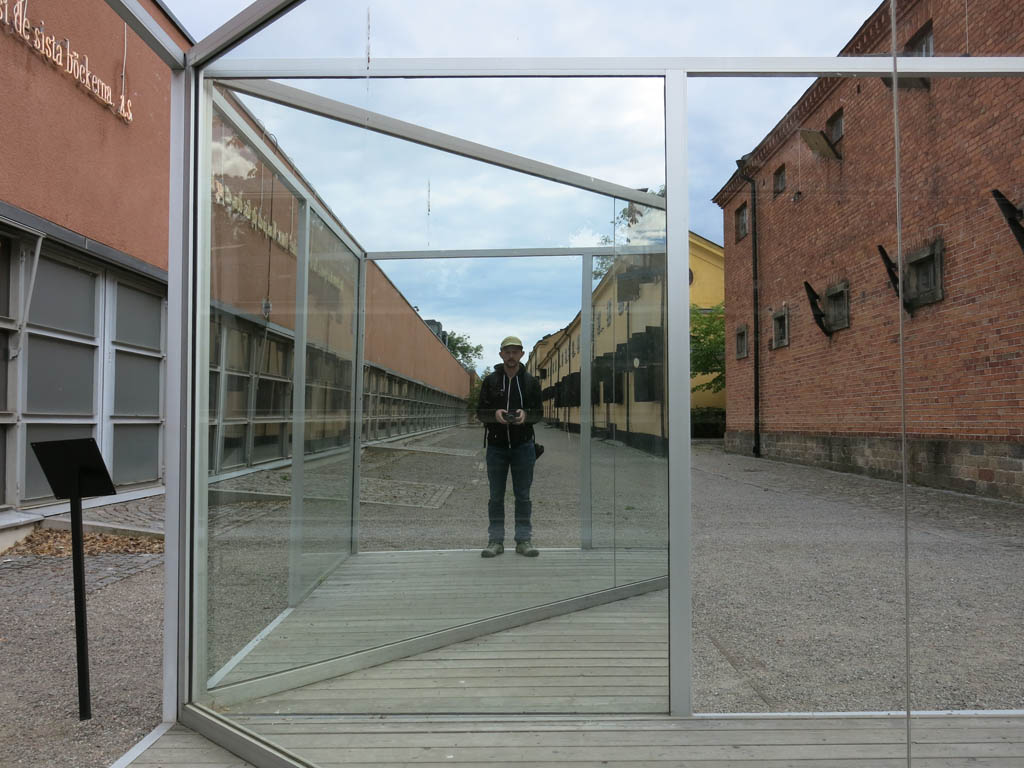 being confused by art installations

The surrounding grounds housed a number of installations, this one which was quite confusing. But worth a photo op.

With that, it was some more casual wandering. It seemed things closed up at about 5pm, as when I wandered through the main shopping area, it was seeming quite quiet. Not sure if it was usual or because of yesterday’s holiday, but the vibe in the city seemed to disappear a little late in the afternoon. Even H&M was closed! Very odd to see that store with no line in front (ha, bit of a Melbourne joke there). 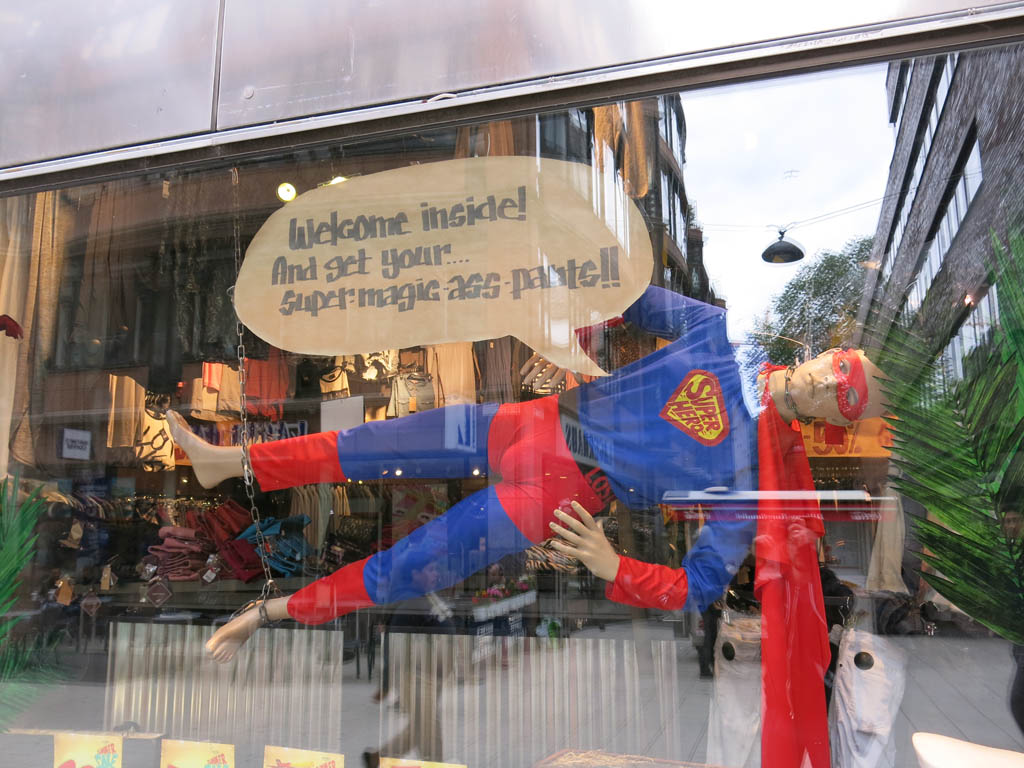 being confused by swedish stores

All roads led to the train station, where it was only 15 minutes before I was on a train back to Uppsala. Another night of some blog and world cup beckons, as well as resting these weary feet… and dreaming of more skanning 🙂

Oh… and a word of note. Posts will be pretty erratic from here on in for a little while. Conference starts tomorrow afternoon, so I won’t be posting every day. I will tend to only post when I get up to shenanigans! There may be some more Sweden stories before I leave in about 5 days. But easiest thing to do is to subscribe to get the news when it comes out (shameless plug)!