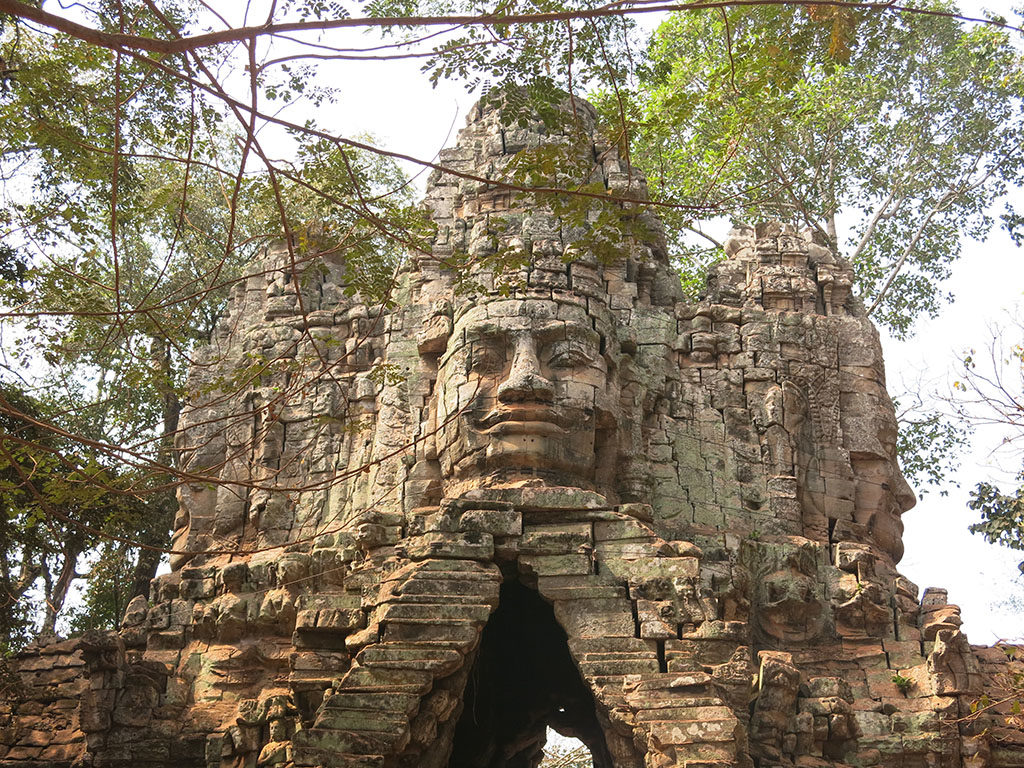 The day had finally arrived. ANGKOR! The main reason for my whole trip really.

We had an early start… 4am to be exact. You can’t come to Angkor and not do a sunrise really, especially given that part of the design of the temple is to be stunning for sunrise and sunset. So up we got and went to get our park tickets. Entry is quite tightly controlled now, with tickets with your photo to be kept on you at al times. We got those nice and early and headed into the temple complex to get a spot for sunrise. 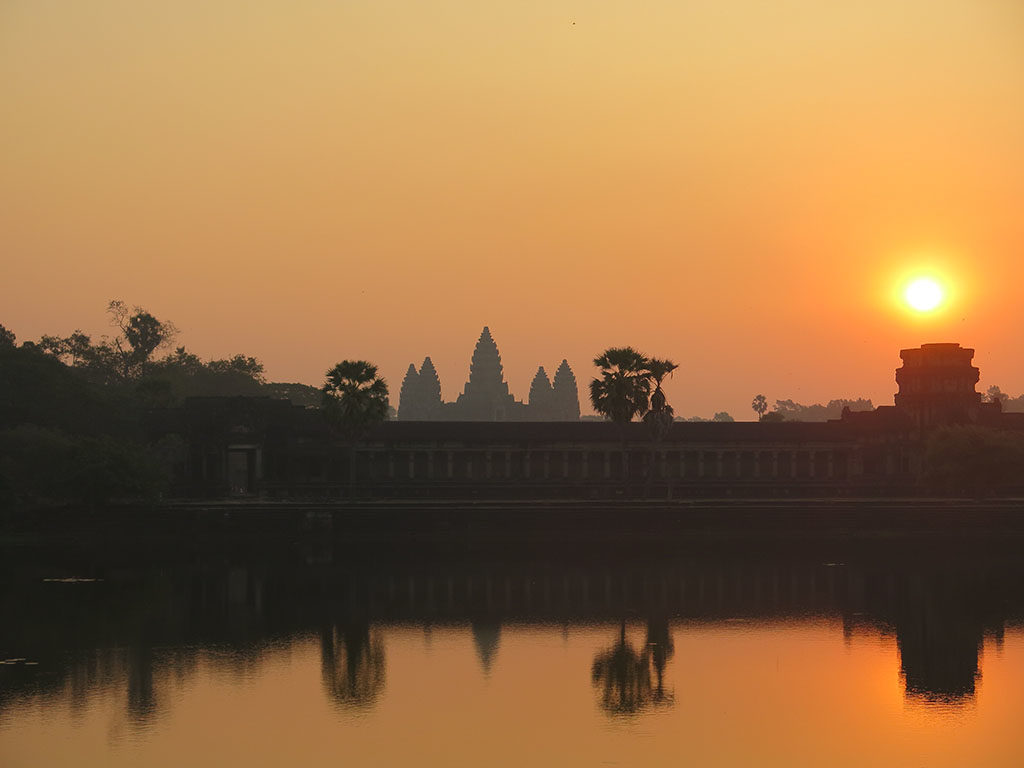 Cham took us to a quieter spot… not the typical spot close to the front. We had a little bit of distance, and while it was quieter there was still certainly a lot of people there by sunrise. I was quite overwhelmed by it all. It had been many years that I had wanted to get to Angkor, so to see Angkor Wat in its glory was quite something. We sat and watched the sun come up and soaked it all in.

Given it was still quite early, we made our way back to the hotel for breakfast and to get our bikes. No point exploring Angkor on foot or tuk tuk when you have bikes!

So we geared up and did the cycle to Angkor , starting back at Angkor Wat. Rather than go in the front, we went in the back entrance which was more quiet. We got to wander in with a little more serenity before exploring the temple fully with Cham and 1000s of other tourists.

I can’t really say too much except that I found my whole time at Angkor pretty magical. I instantly regretted only allowing 2 days to explore, but oh well. I guess I would come back. I just enjoyed the time I had. 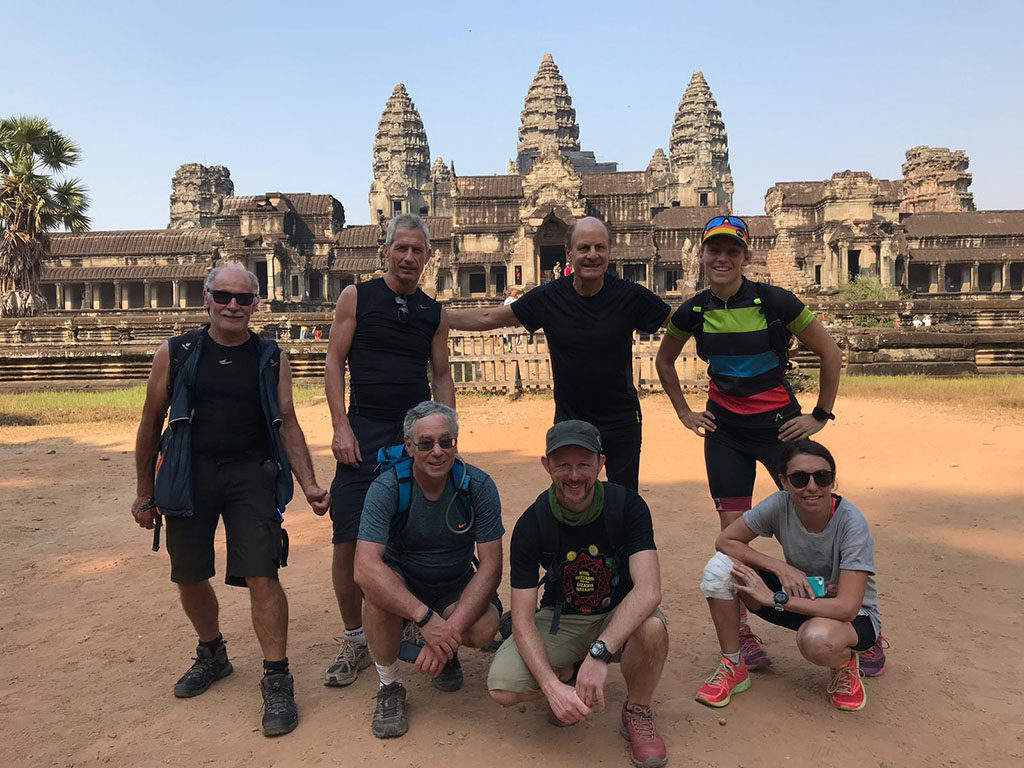 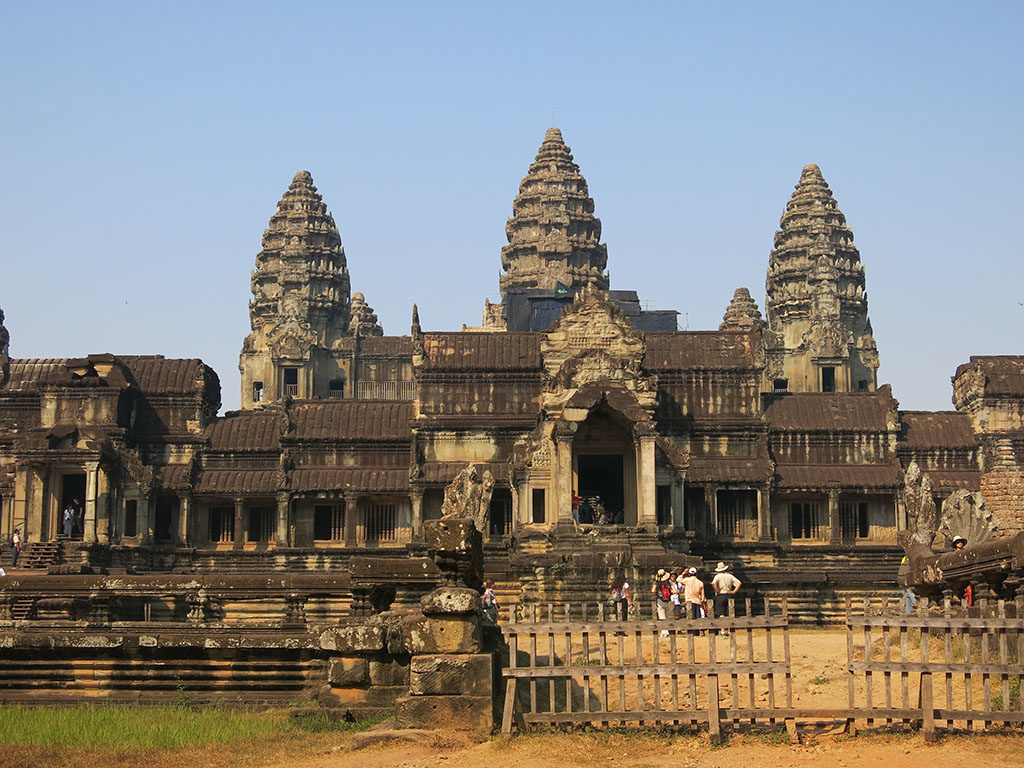 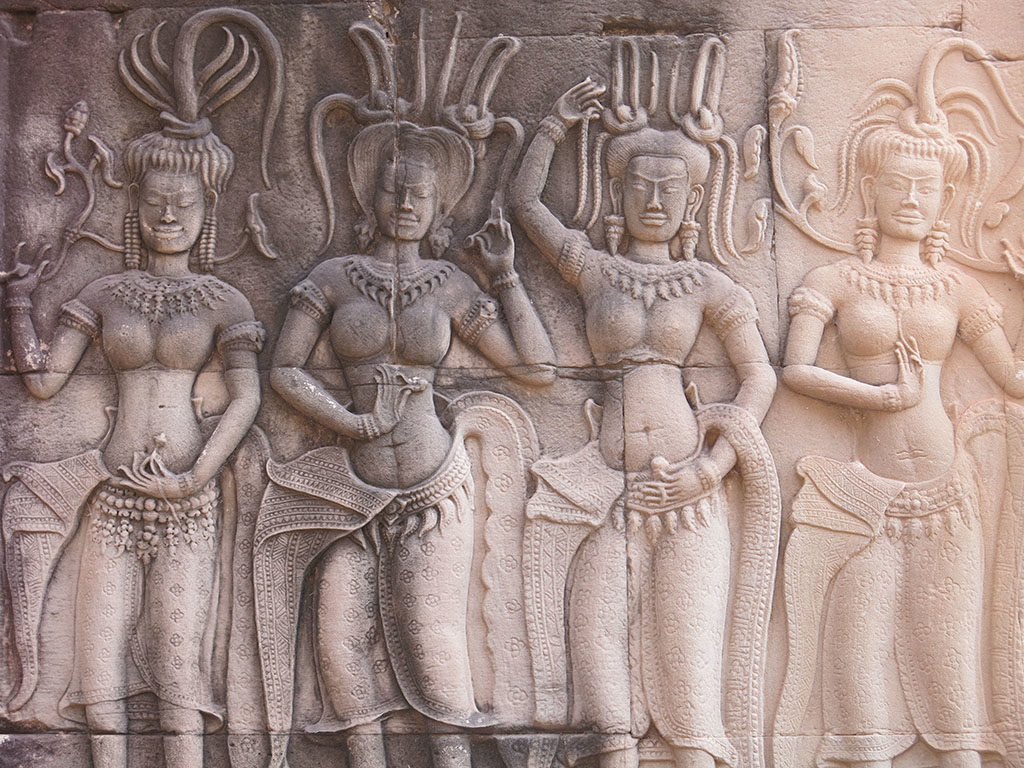 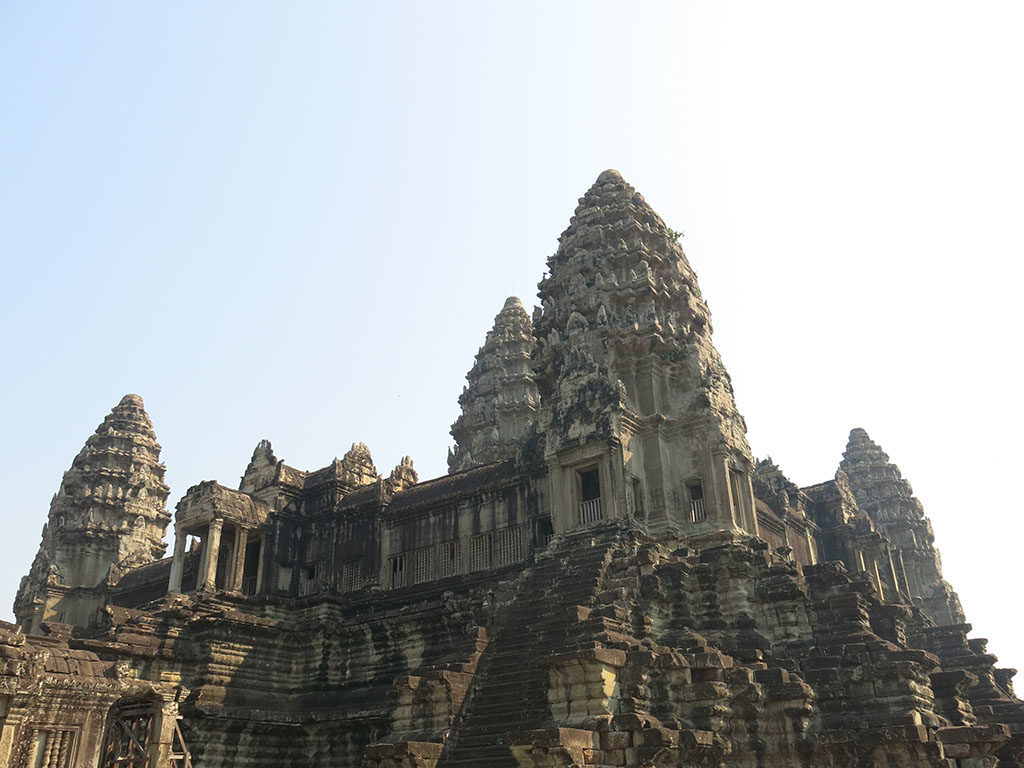 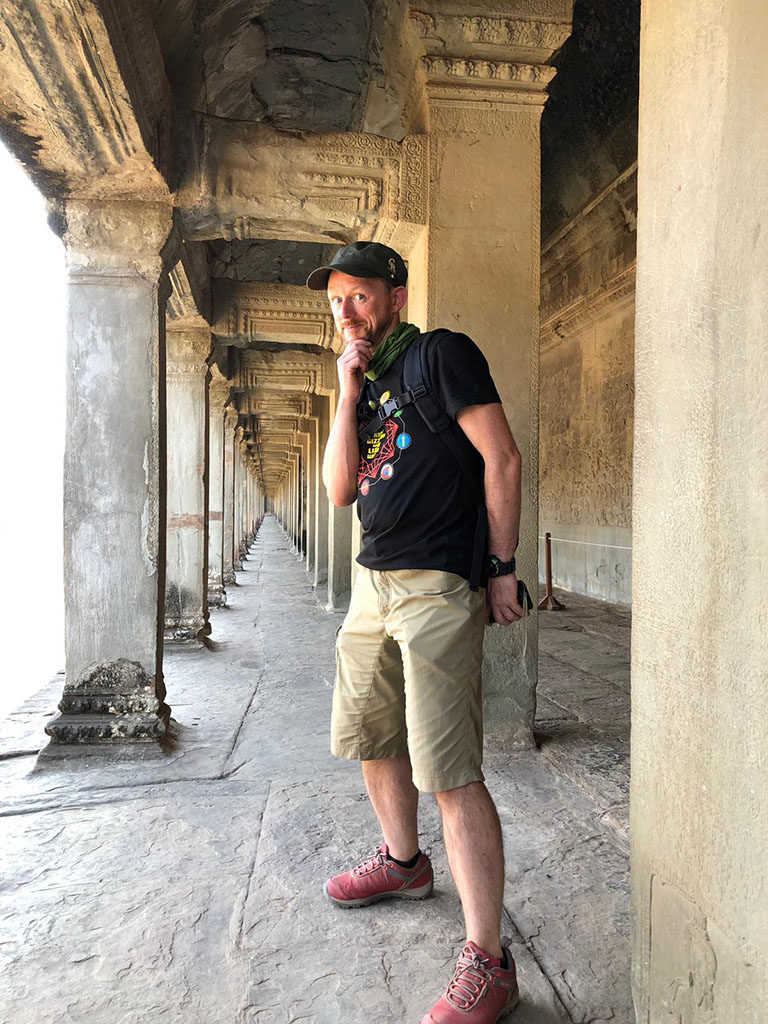 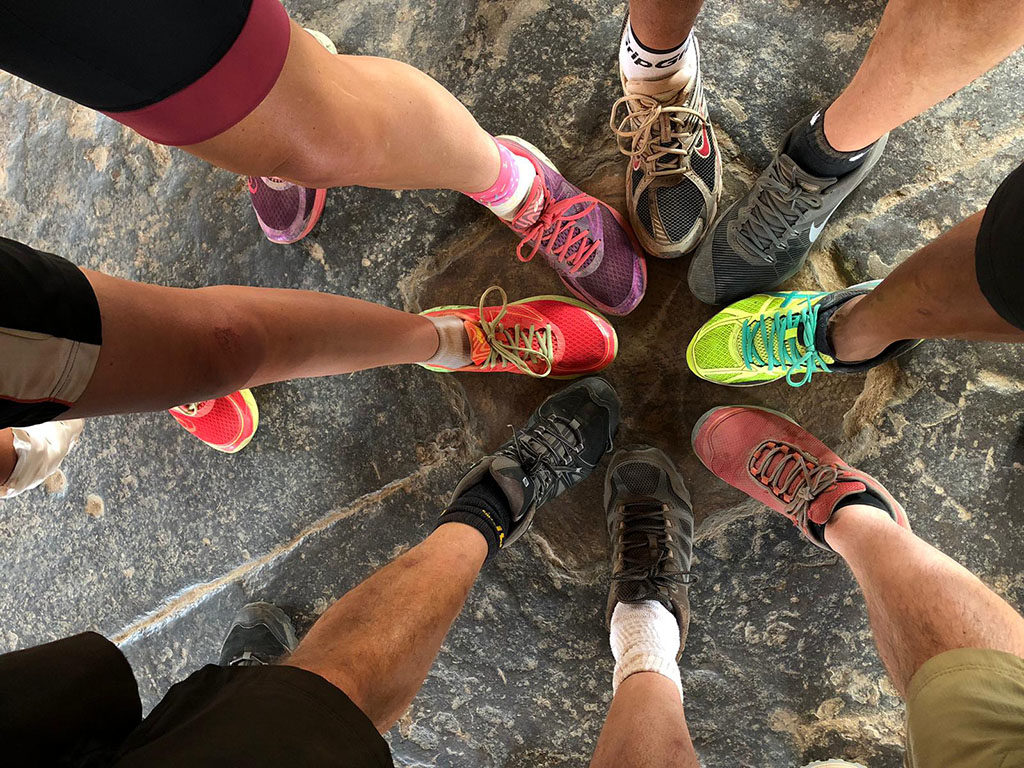 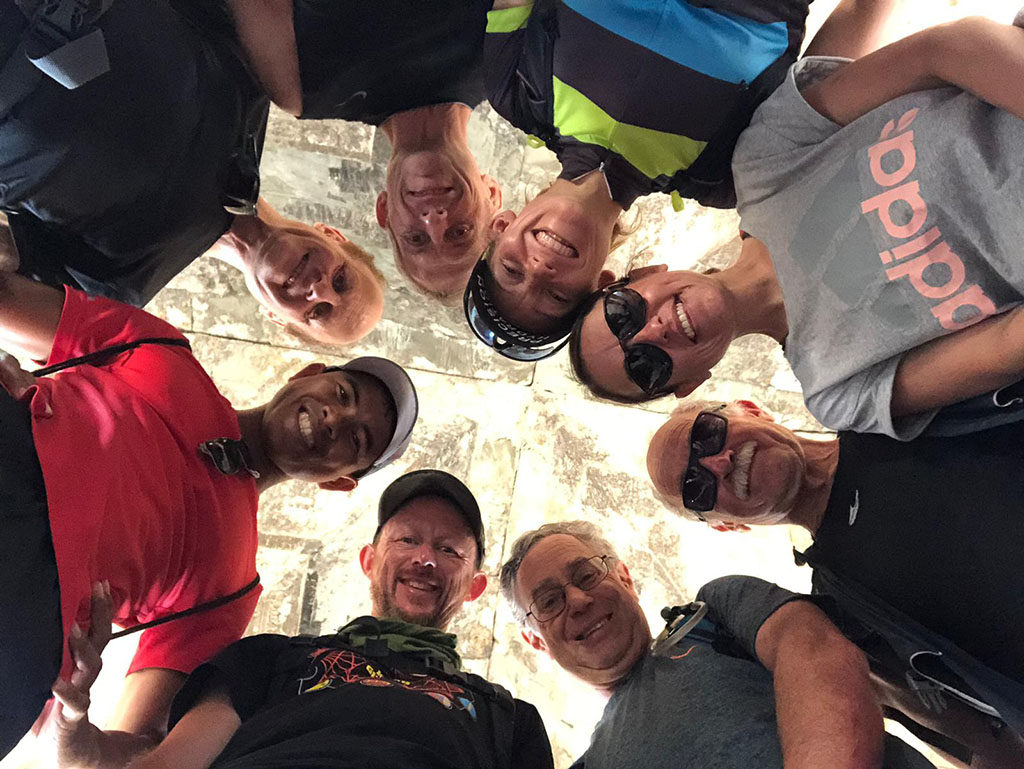 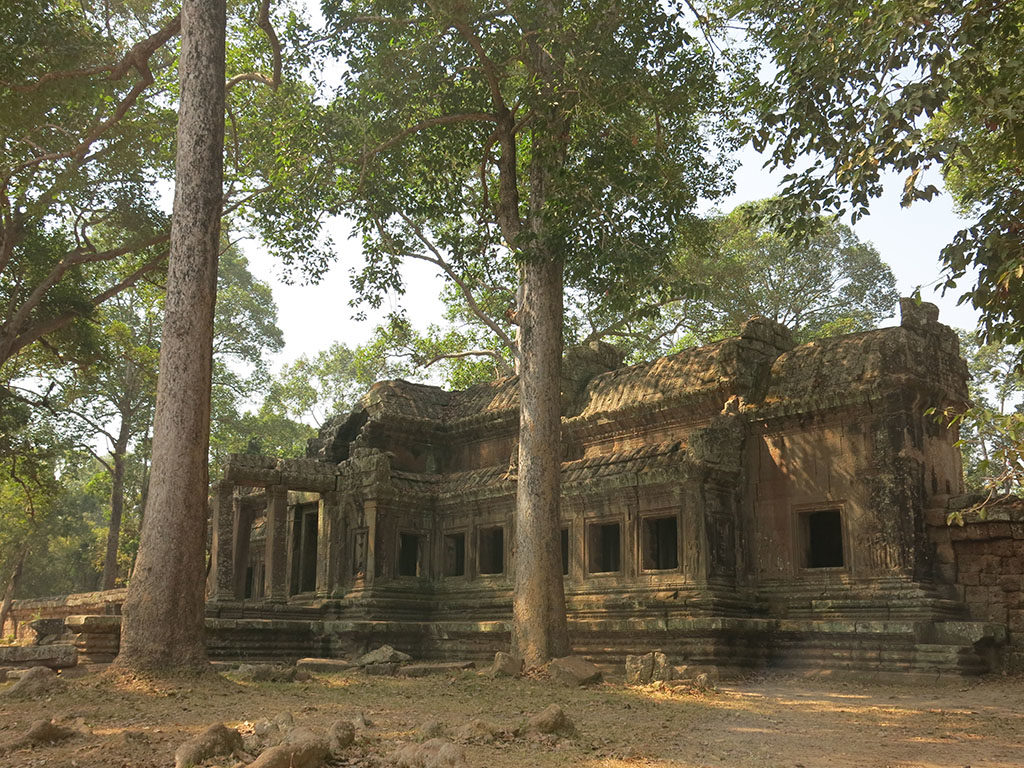 So we spent about 2hr in Angkor Wat, marvelling at the structure and the carvings.

We then jumped back on the bikes to cycle to Angkor Thom. The Angkor complex is quite massive, so on foot is quite daunting. But bikes made it so much fun, as we could scoot around in the woods and then also along the outer wall of Angkor Thom which was great. It is about 1.5km on each side, so to cycle rather than trek in the heat was a great way to do it. 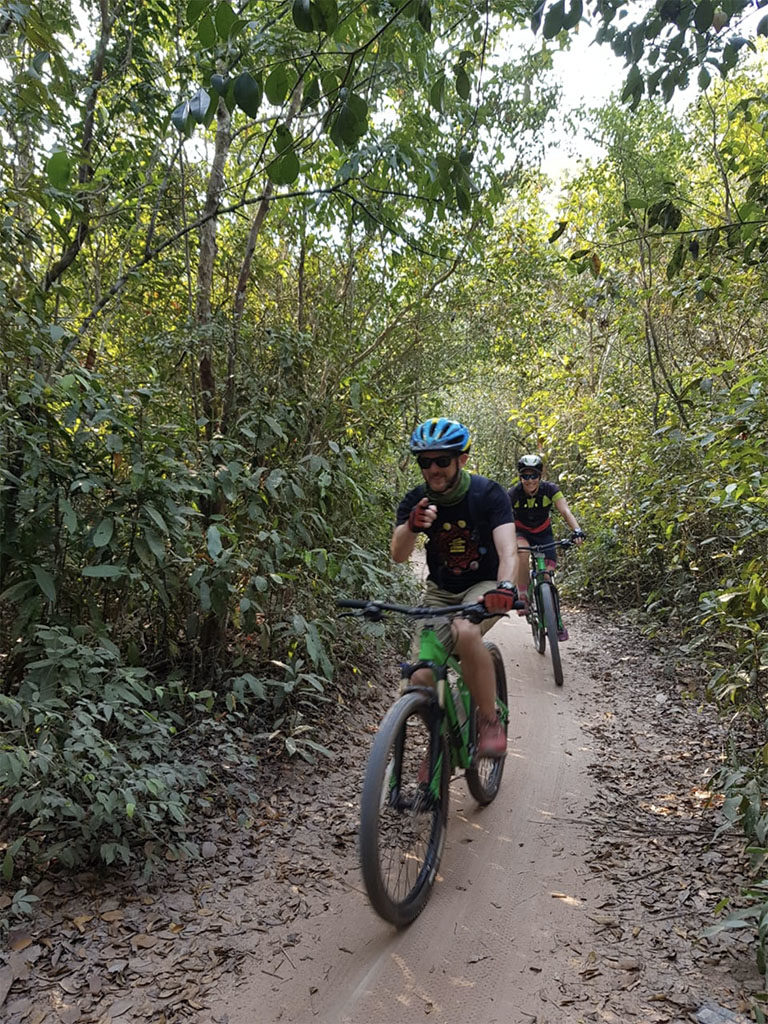 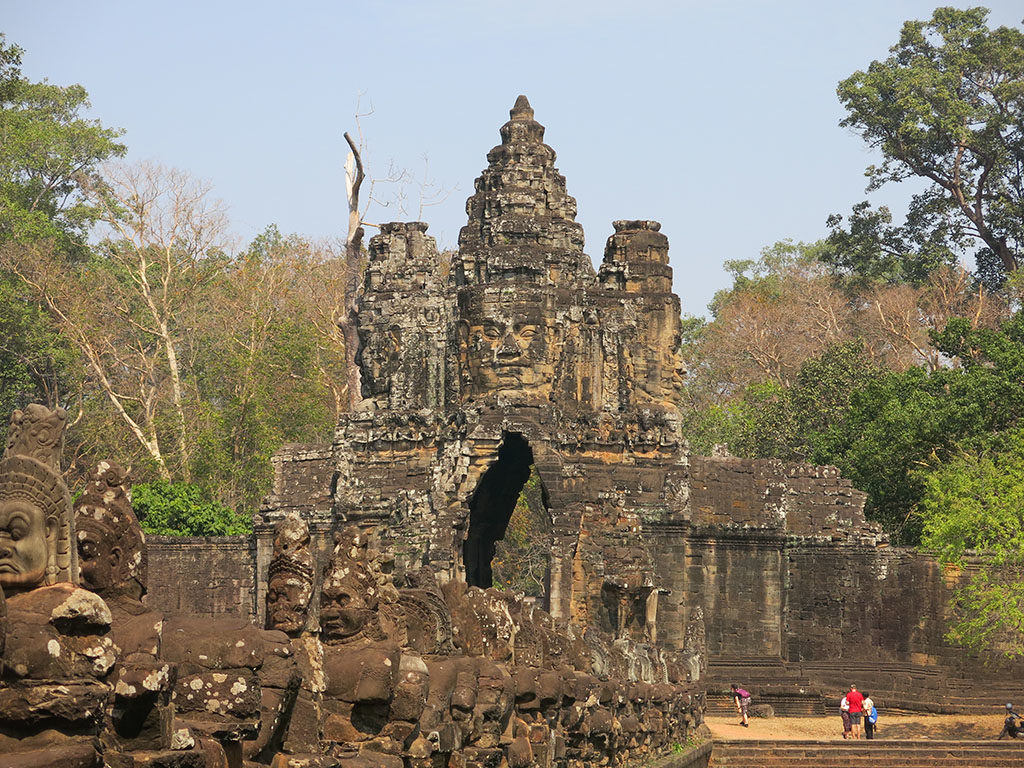 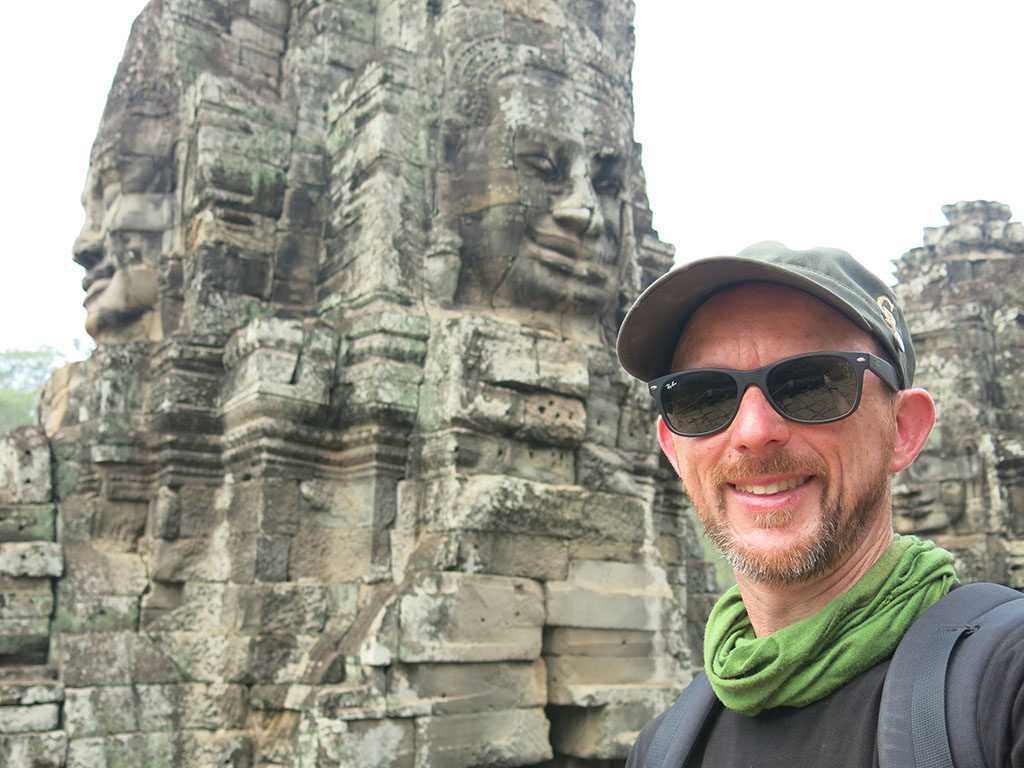 Bayon exists within Angkor Thom and was my favourite of the day. Many hundreds of stone heads graced the temple and it was absolutely stunning and fascinating. 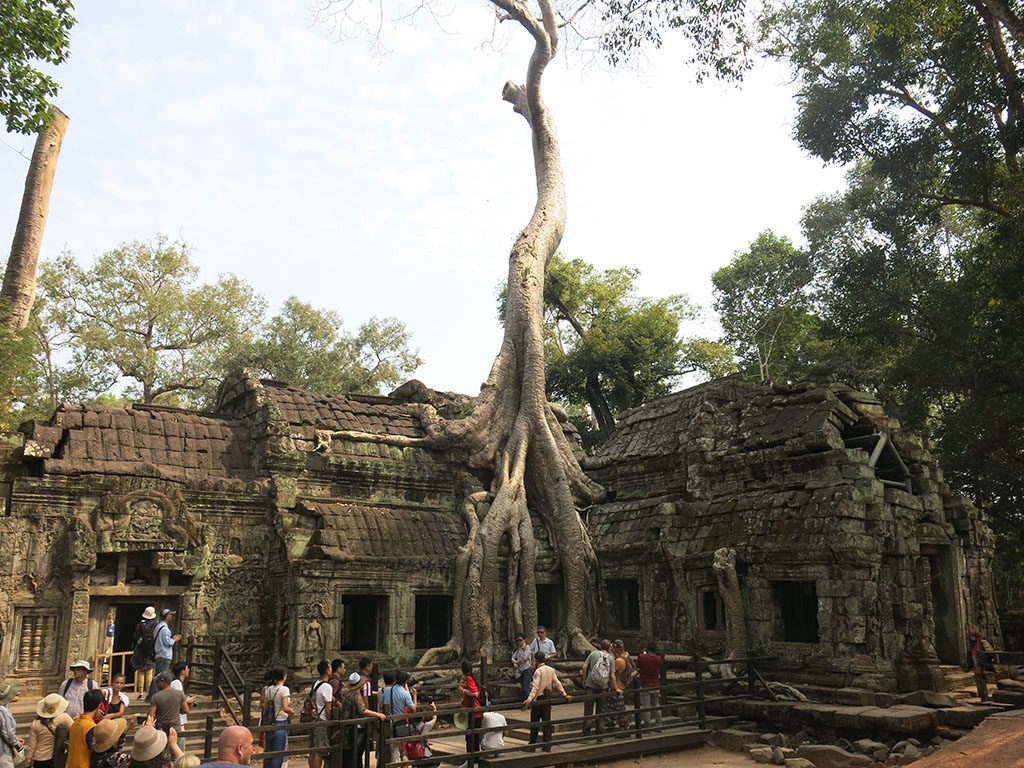 Back on the bikes again to cycle to the next most popular temple, and within close proximity to the others, Ta Prom. Outside of Angkor Wat itself, this is the most recognisable, being the temple with the trees growing out of it. Yep, the Tomb Raider temple. I found this one the least compelling, but it was indeed quite visually striking.

We had some time to explore and then have a very late lunch before we cycled back to Siem Reap. We were hot from our riding and exploring, so what better thing to do than jump in the pool with a drink?! We did some relaxing and then out for dinner. Sadly it was the farewell dinner, as the tour was technically all done. Much of the group was disappearing the next day, so it was unlikely I was going to see many the next day. The make up of this group was quite a bit different to other G Adventures groups I had been part of in the past, but it was a great group. Everyone was a great cyclist meaning when you ride a few hundred kilometres and need everyone to be on it, we were always riding strong and everyone was looking out for each other. So it really was quite a perfect group.

Cham was a top tour leader too, which I now expect from G Adventures. Fun, super knowledgable, and always looking after us… we could not have had better. 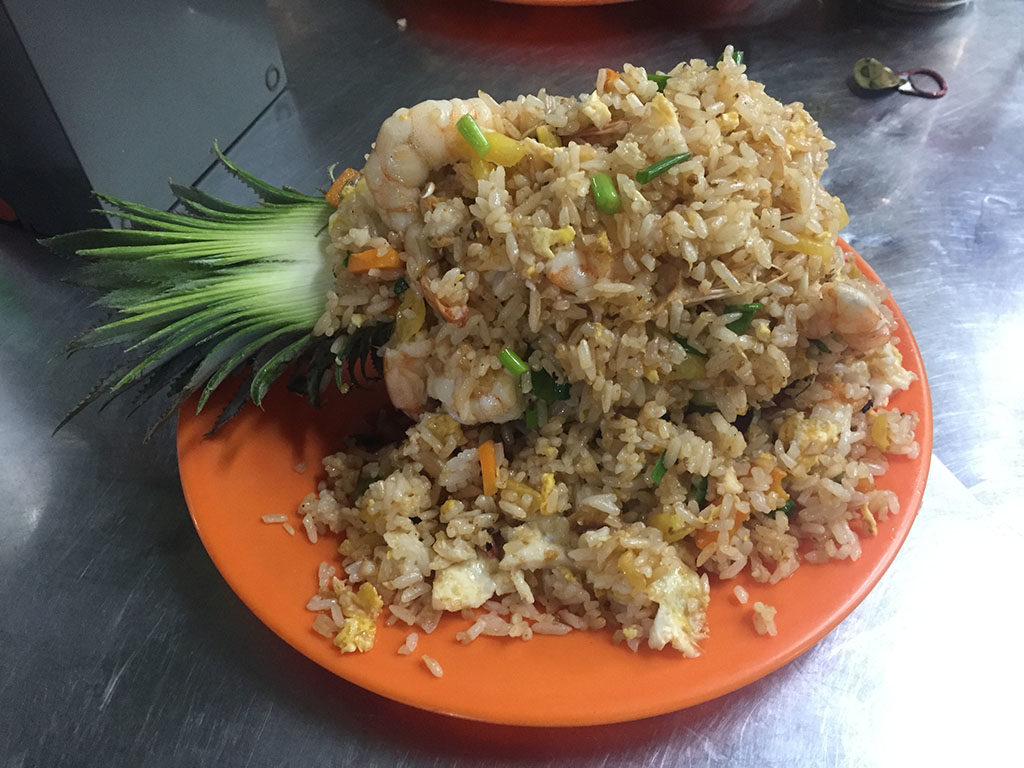 Our night was like most… dinner followed by more cheeky drinks before we said our farewells this time. I would have one more day of adventure ahead.