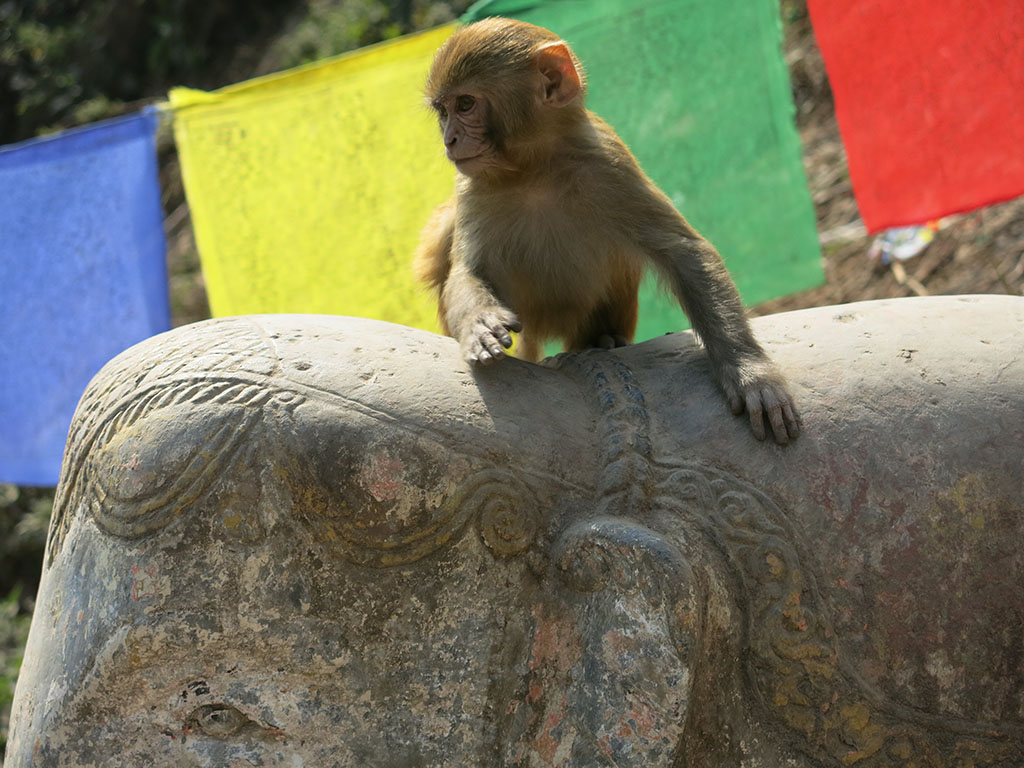 I was keen to explore Kathmandu a bit so booked the free day before my Base Camp trip started, along with a day at the end (although the end day was more a contingency day in case we couldn’t get out of the mountains). In Kathmandu it seems there is two main things that most folks who are on a tight schedule visit: Durbar Square and Swayambhunath (better known as the Monkey Temple). I slept really well, but was up nice and early, so by 8am I decided I was done being in the room and headed out into the streets. 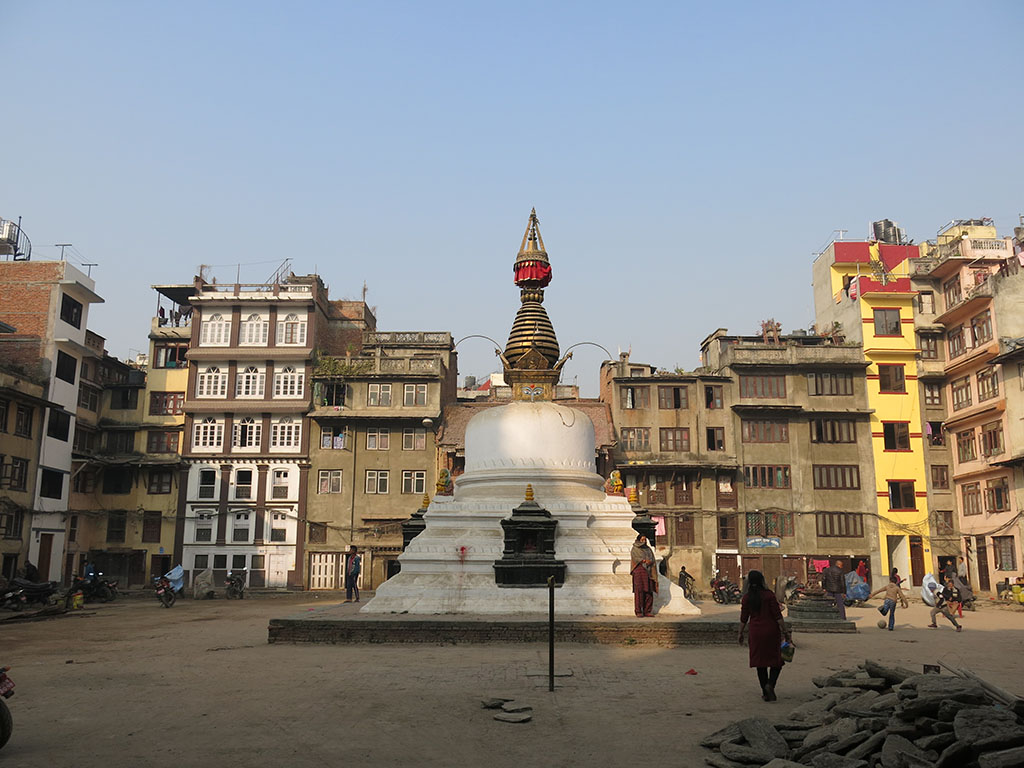 It was great wandering the streets as the city woke and set itself up for the day. Quite quickly you get out of touristy Thamel and into streets where local shopkeeps are setting up and people are out getting their daily needs. I love seeing the people wandering the streets going about their business, quickly stopping by one of the many stupas (Buddhist monuments) to pay respects and keep moving. I naturally ended up down at Durbar Square, a UNESCO World Heritage Site, and the main place to visit for tourists. 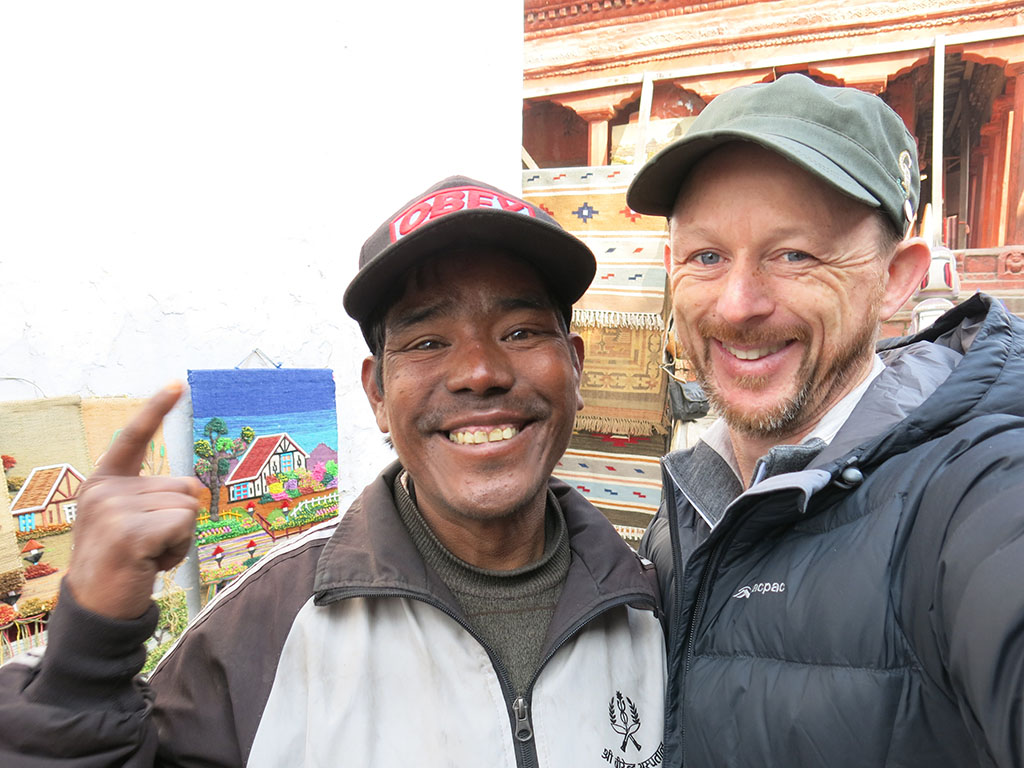 mr ryan showing me a thing or two

From what I know “durbar” is a general word, and there are actually a number of “Durbar Squares” that exist. This one is the centrepiece in Kathmandu, home to many buildings including palaces and religious monuments. As I approached I immediately got the sense that sadly this square bore the brunt of the earthquake in 2015. While I could see many beautiful monuments, there were also many piles of bricks, and considerable scaffolding about. Like many please such as these around the world I was approached by a number of people offering to guide me about the complex. I was happy to have someone show me about, and so Mr Ryan it was. Obviously his name was not strictly “Mr Ryan” however he seemed happy that it was the easiest pronunciation of his actual name, so since I couldn’t write his name down at the time, Mr Ryan it is. 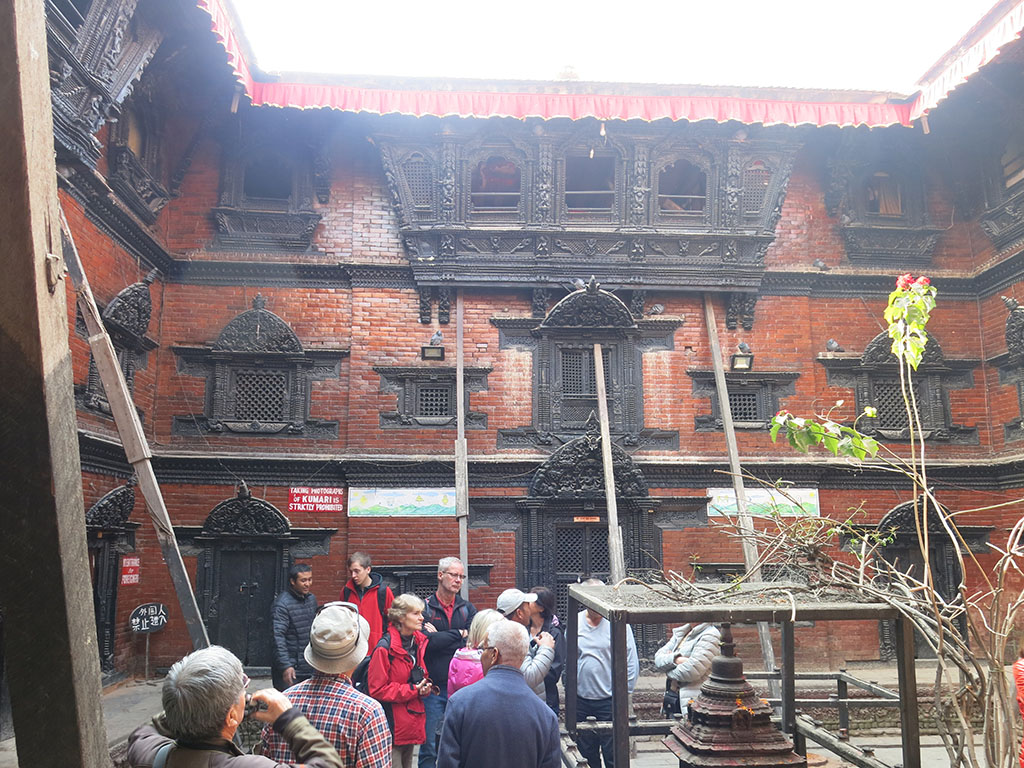 looking for the kumari

He as a delight and super knowledgable so I was happy to have acquired his services for the next hour or two. He led me all about the complex, which although it is not necessarily confusing, having a guide helped orient myself and also place everything into context. He led me first to a very special temple, one in which the Kumari was currently present and watching over the visitors. From what I can gather, the Kumari is a young girl (4 at the moment) who is a revered goddess for the Nepalese Buddhist community. She makes appearances at key times in the year and this was one. Alas we could not see her, but the signs advising against photos suggested she was certainly above us watching. 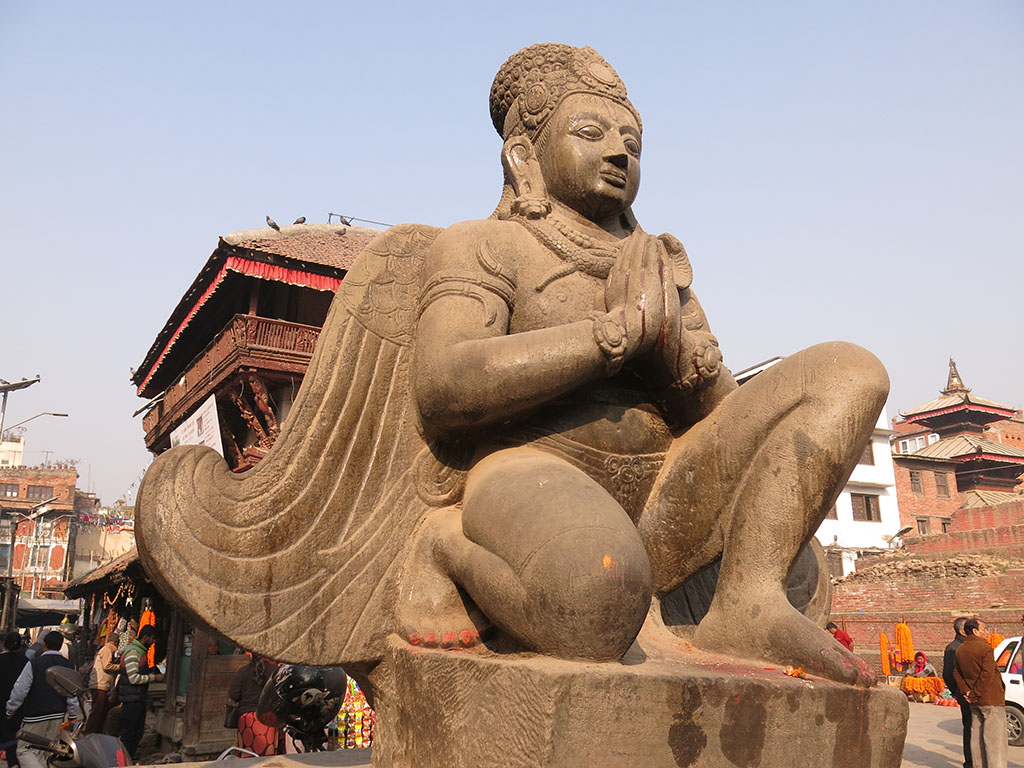 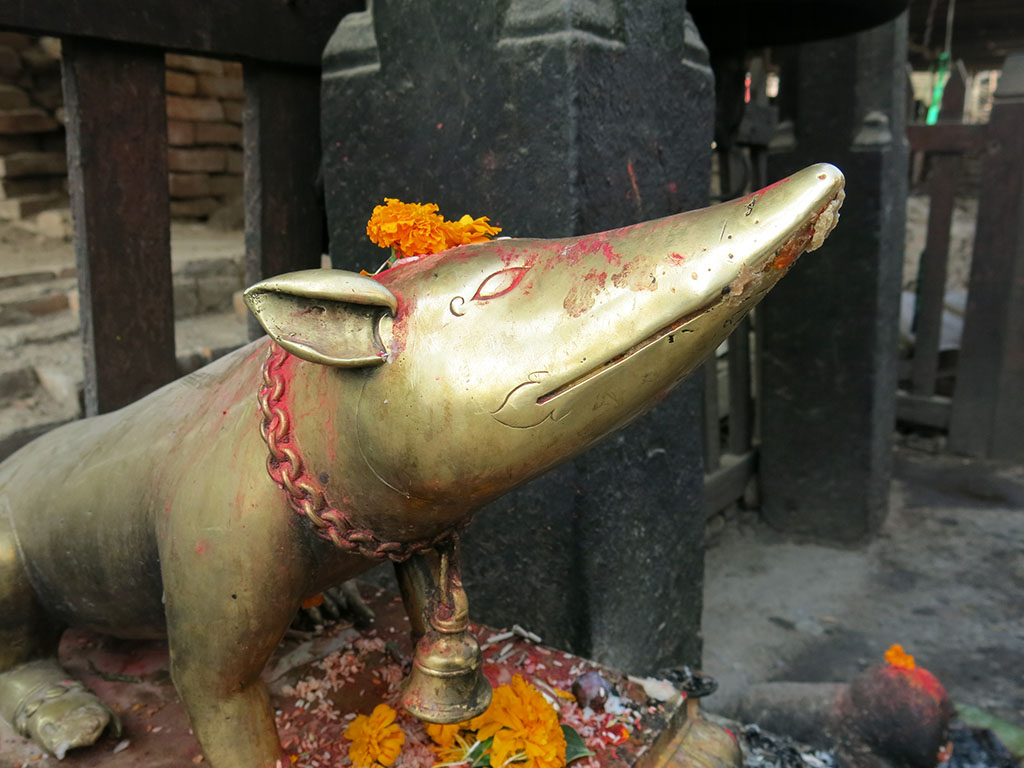 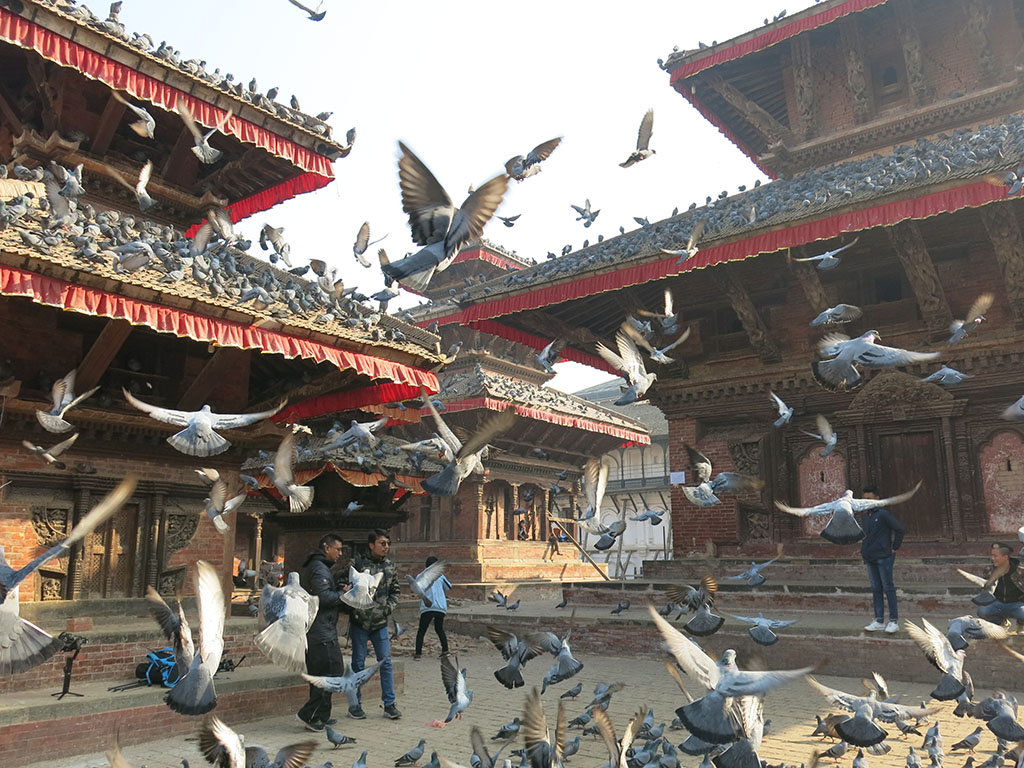 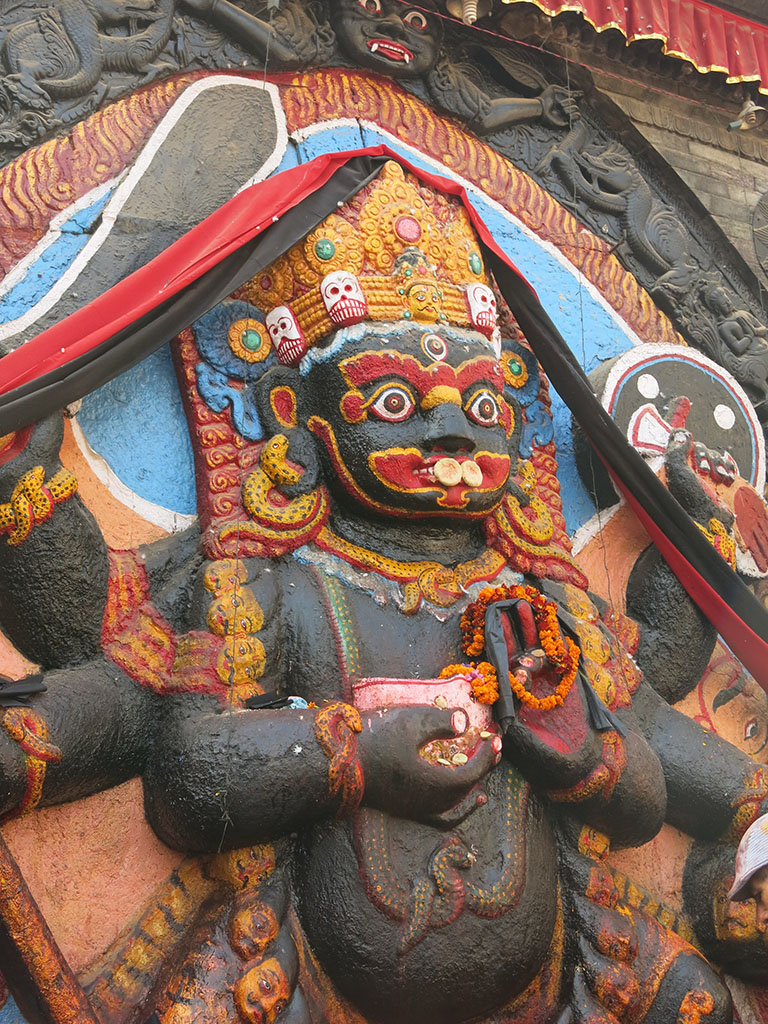 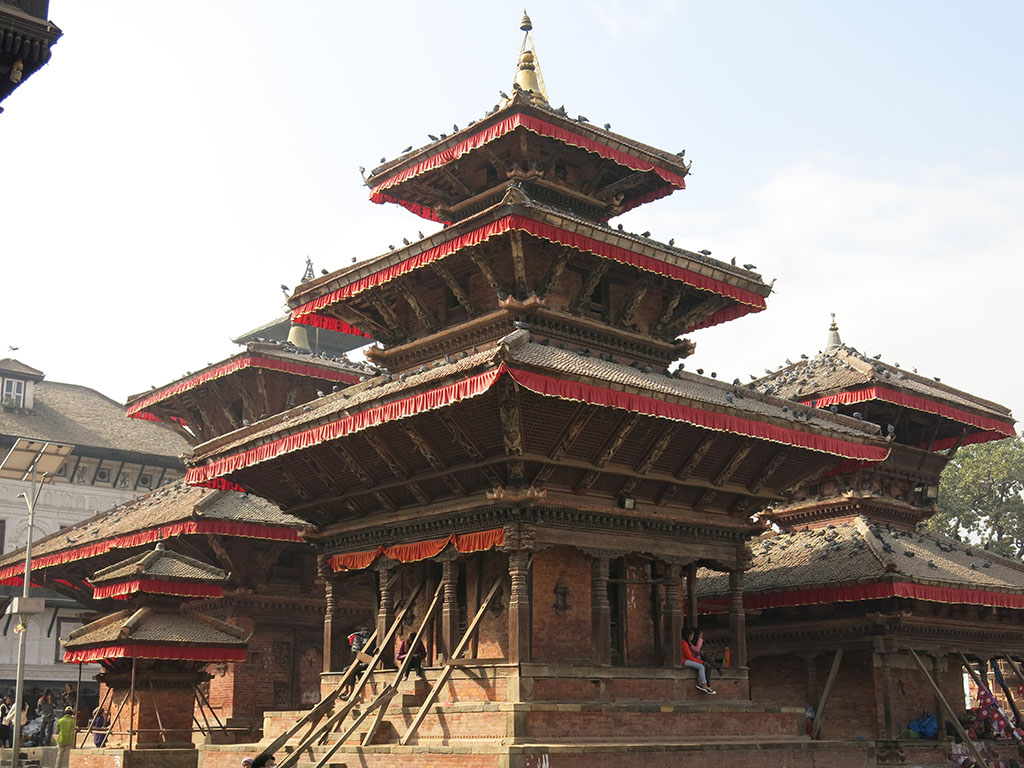 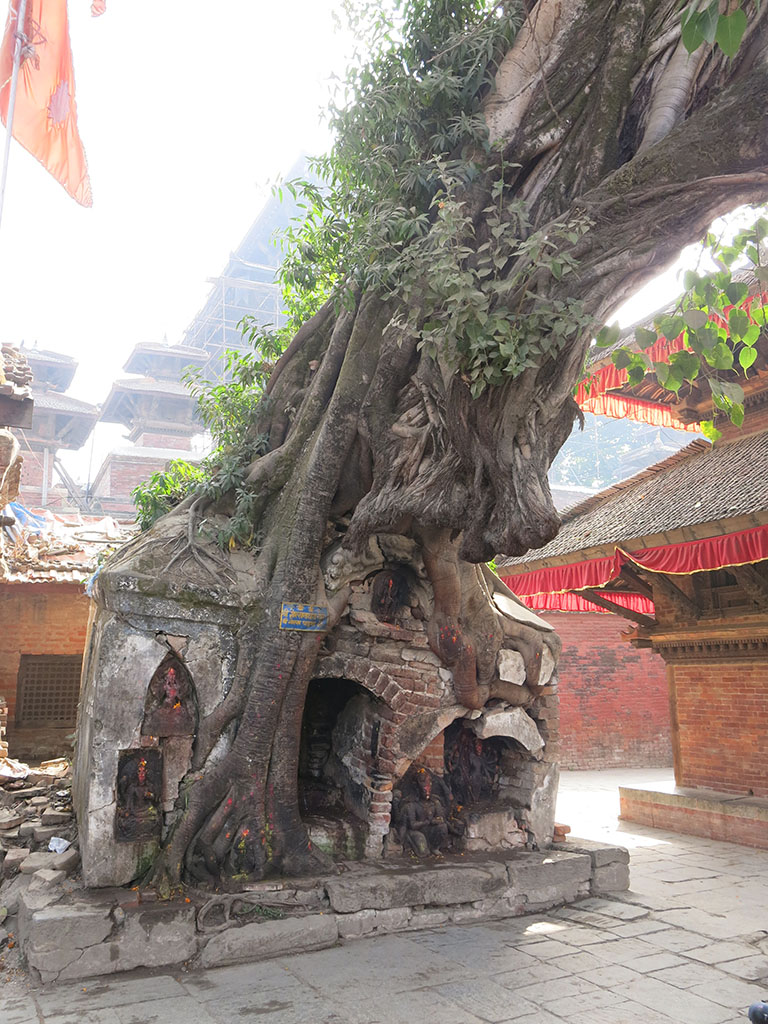 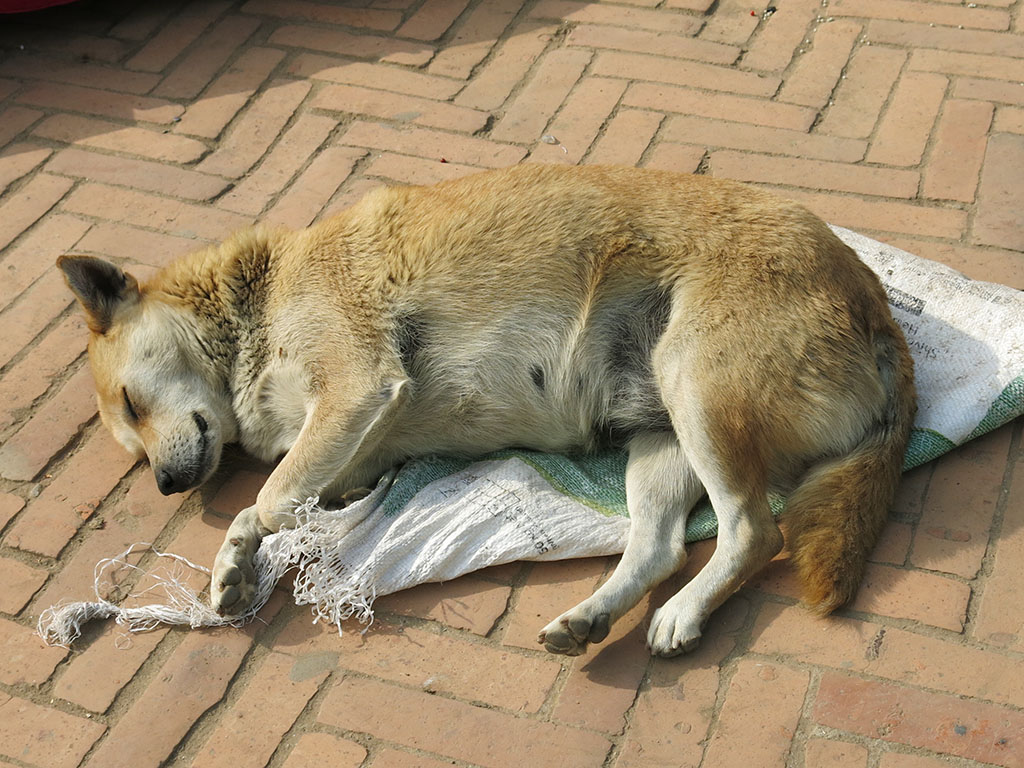 Mr Ryan showed me around the complex, and sadly as mentioned, a number of things he pointed out were now just a pile of bricks, including the “Hippie Temple” where apparently the Beatles, Hendrix and others visited and played guitar. Thankfully though there was a lot of construction meaning that hopefully things will be returned to their former glories. 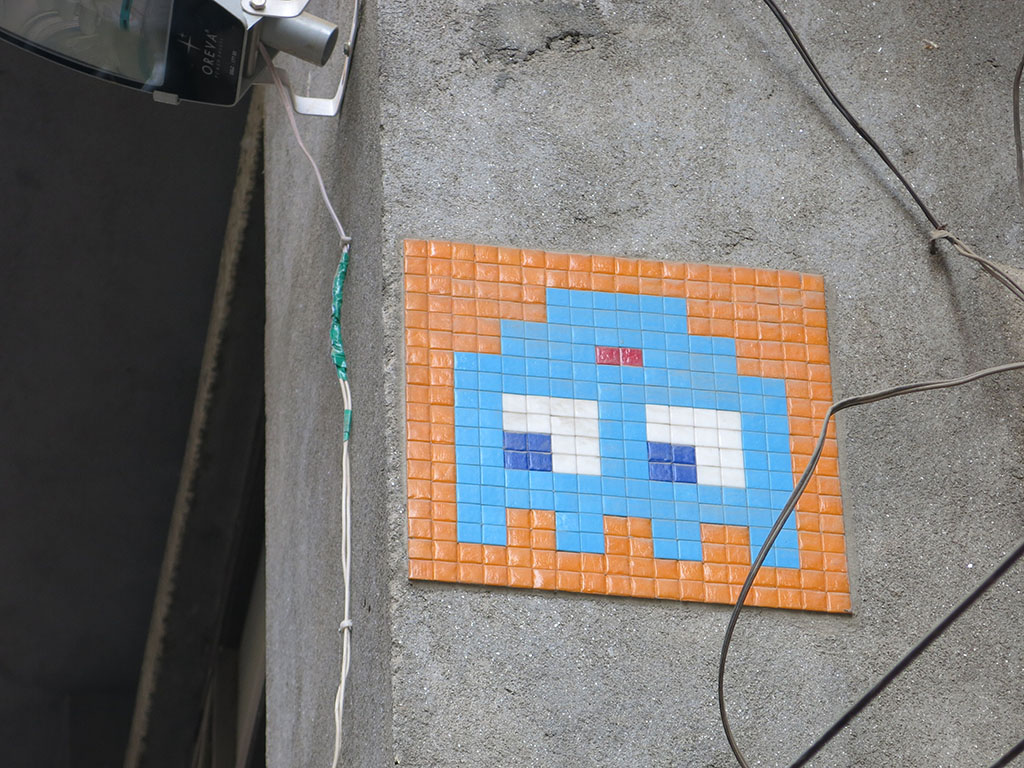 I bid farewell to Mr Ryan, wandered about for a little longer, and then headed off, this time toward to Swayambhunath, the monkey temple. On the way, up a random street, I was super stoked to come across an Invader! I had no idea that Space Invader had visited, and after some reading up afterward apparently there are a number around the city (although supposedly many were destroyed in the earthquake). But I was happy to see one in such good condition… plus the red dot on the forehead was a nice touch. 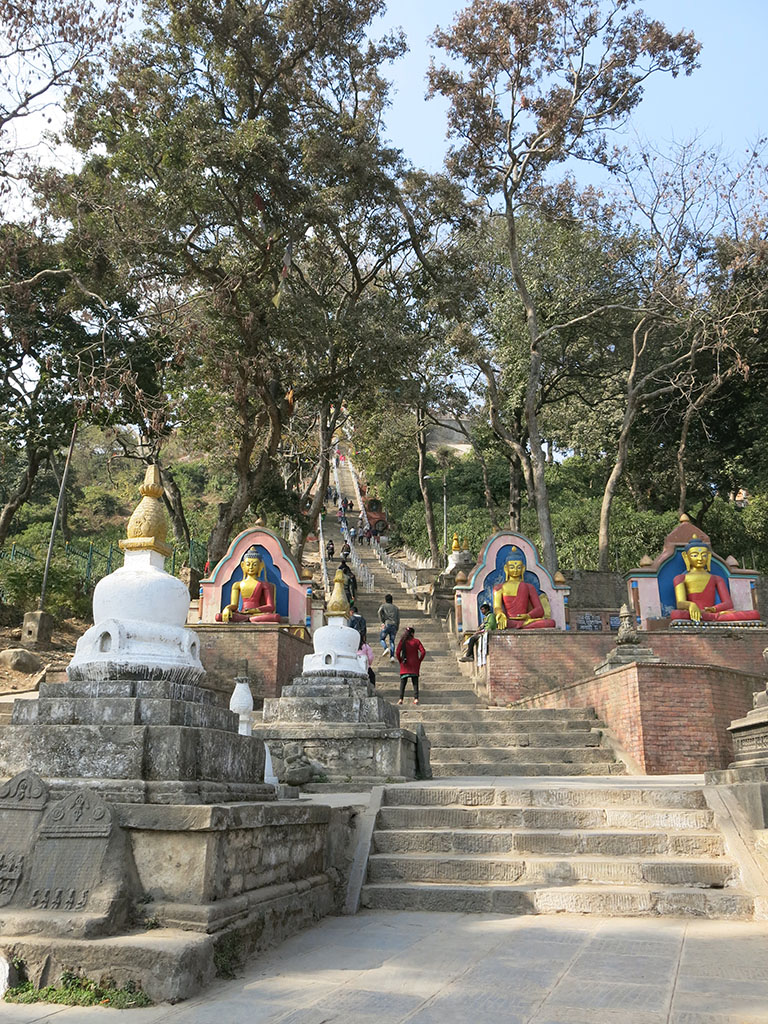 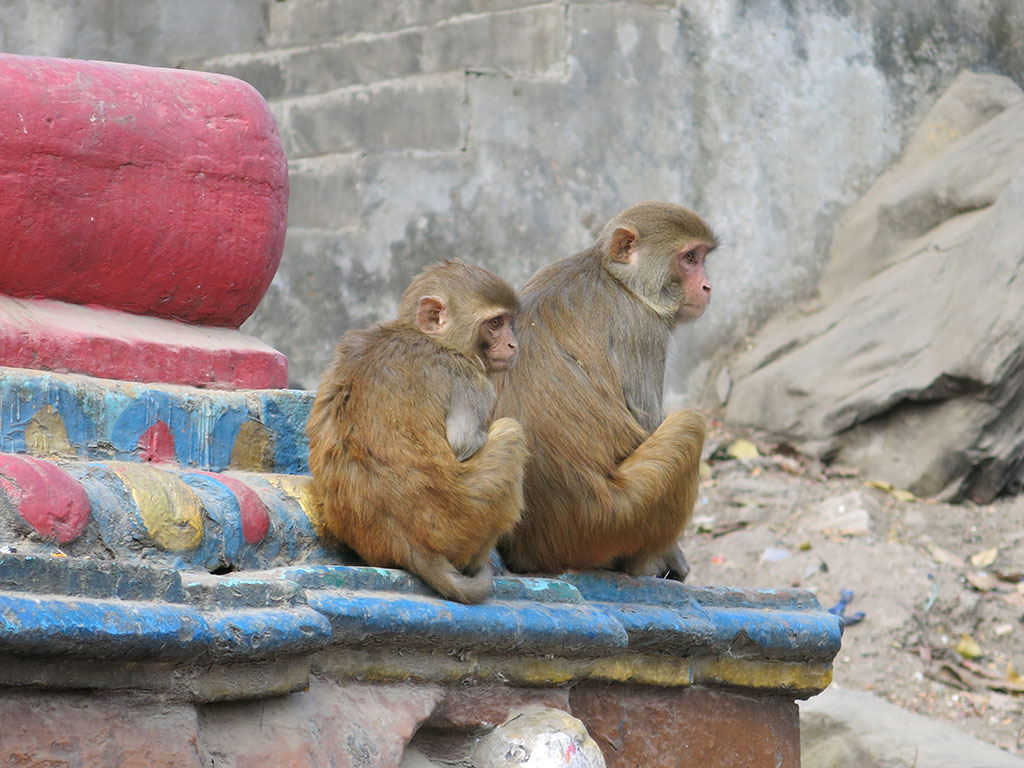 The Monkey Temple is high on a hill overlooking Kathmandu, so for half an hour or so I weaved through the streets toward it. As you arrive you then have about 400 steps to ascend to reach the main stupa and buildings. Along with the other visitors, you are also joined on your way up by the many monkeys that hang out there. There are warnings to keep your bag closed and food away, and the monkeys playing with a Sprite bottle were evidence of that. I made my way up easy enough (I would hope so given I had several thousand meters of ascent to come!) and wandered the gorgeous, vibrant stupa at the top, all the while being eyeballed by the monkeys. 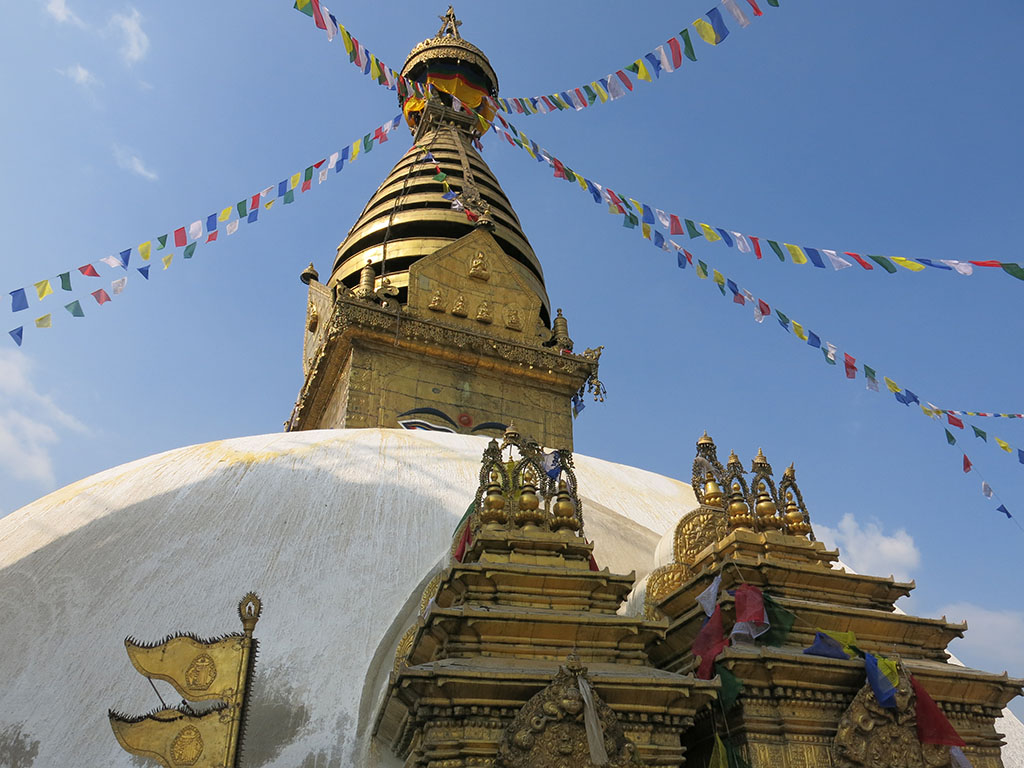 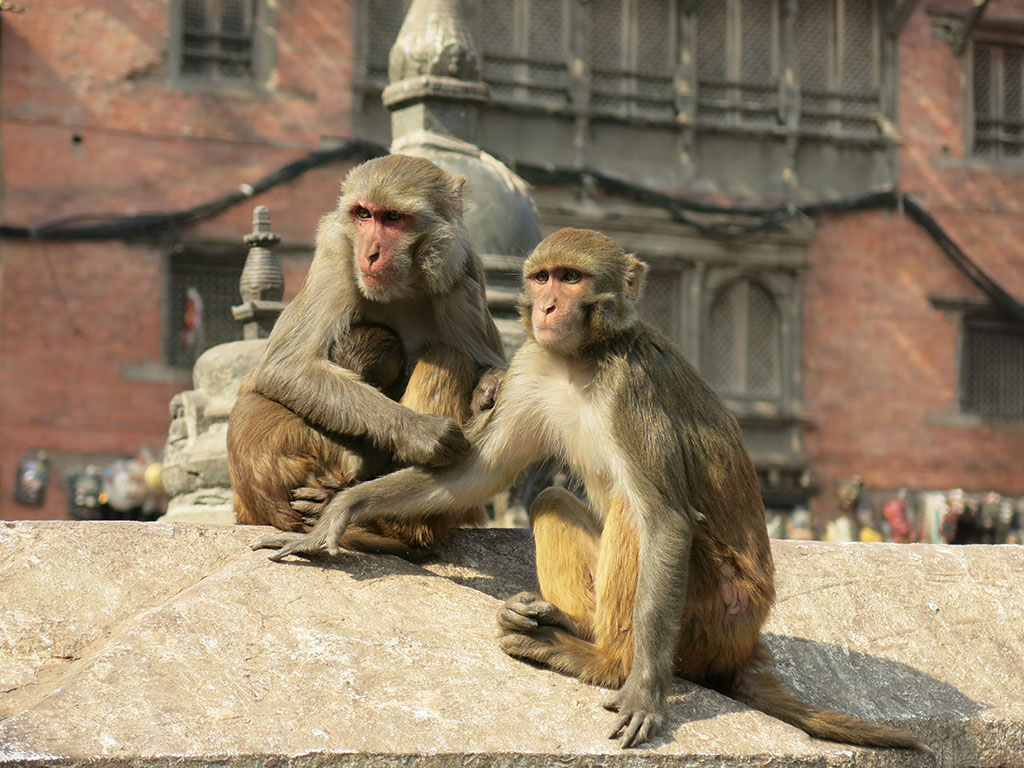 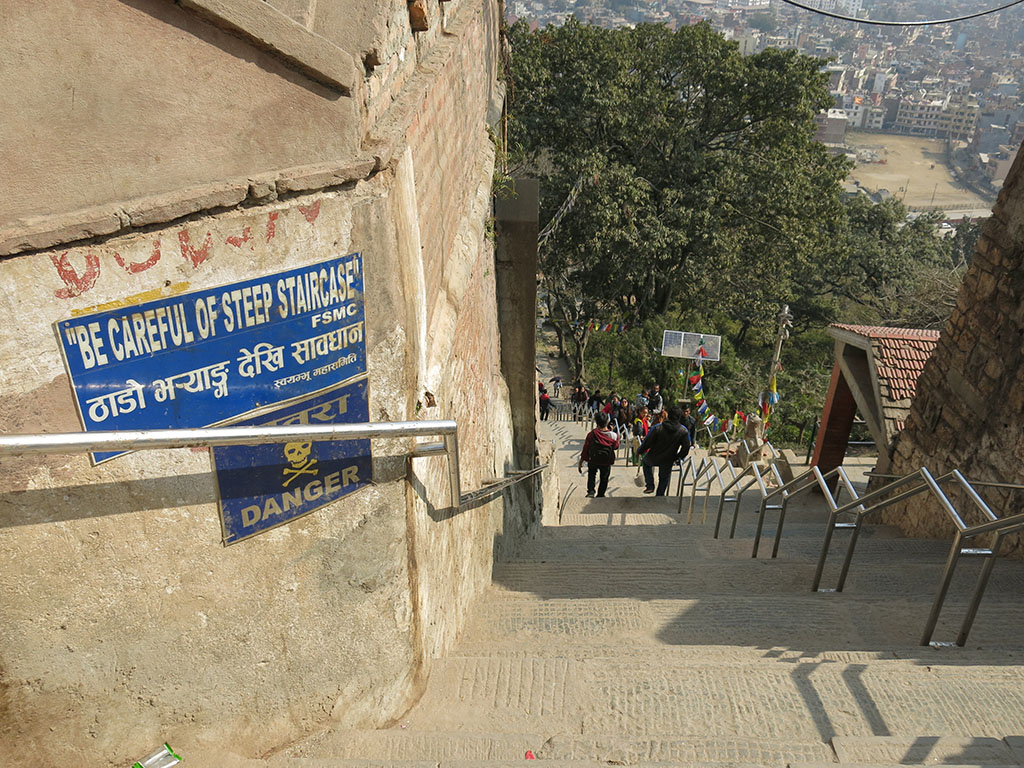 There were great views looking out over Kathmandu, the haze that seems to be common here not too obstructive. From this height the city looked bigger than I first thought, sprawling all around.

It was time to wander back to the hotel for my first meetup with the rest of my hiking group. But on the way back I had to stop for food sine I had been all go since early in the morning. What to have? MOMOs! I wheeled in to Yangling Restaurant on my way back and had what was undoubtedly my favourite dish of the trip… Chilli Buffalo Momos. Damn. They were SO good. Steamed first then lightly fried I think, they were coated in a delicious, slightly sticky chilli sauce. The buffalo was great but the whole dish was just amazing. I would undoubtedly having more of these bad boys on my return to Kathmandu 🙂

I got back to the hotel and had a little time to chill before meeting my G Adventures group. Our CEO was Pasang Sherpa, and he was joined by Mingma who I had met at the airport. There were 8 of us hiking… 3 Aussies, 3 Brits and 2 Irish lads. If first impressions are typically right, then I had a very good feeling about the trip as everyone seemed cool and up for it. Pasang ran us through everything… not much to know really but making sure we had all the gear we needed. At this point I knew I had done well with tour leader as Pasang had the BEST laugh. This was going to be 2 weeks of good times I could tell.

A short wander in Thamel to get last money and then dinner, and it was off to bed for our early morning trip to the airport and official start to the journey.