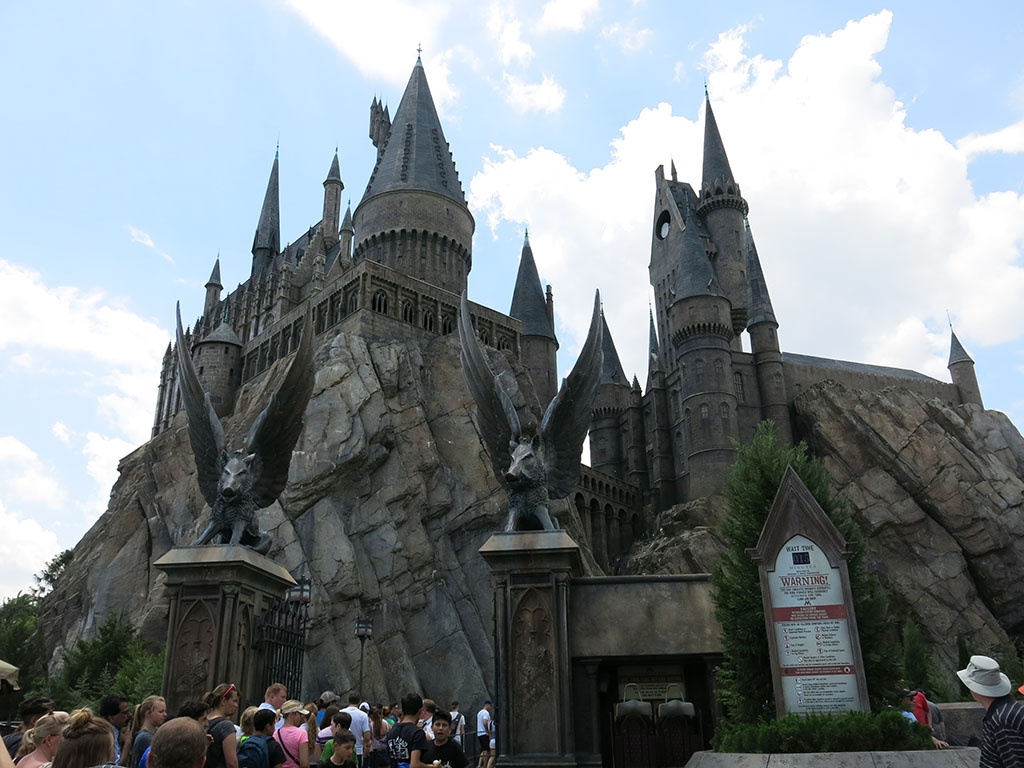 Today was our one other day outside the Disney bubble. The Orlando area has a bazillion things to do, and the other main theme park to visit is undoubtedly Universal Studios. I had visited Universal in California many many years ago, and while it is fine it is not somewhere I would rush back to. It’s a little different these days with the addition of the Harry Potter franchise. 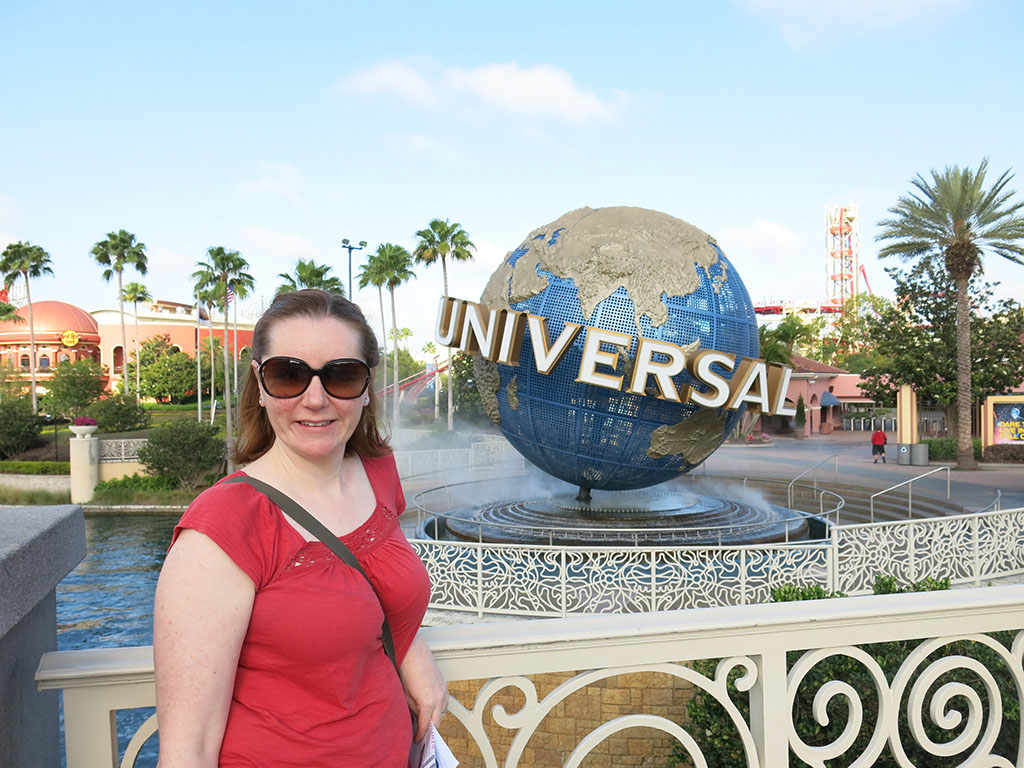 In reality, Potter was the reason we were visiting the two Universal parks. Yep, two. They have a good scam going on, with the Harry Potter rides and experiences split between the two parks, meaning you had to have a special 2 park ticket to get to both. Of course they did. That ticket was also the only way to get onto the Hogwarts Express that runs between the two parks. There was never a question of not going, but it made it a bit of a bitter pill. 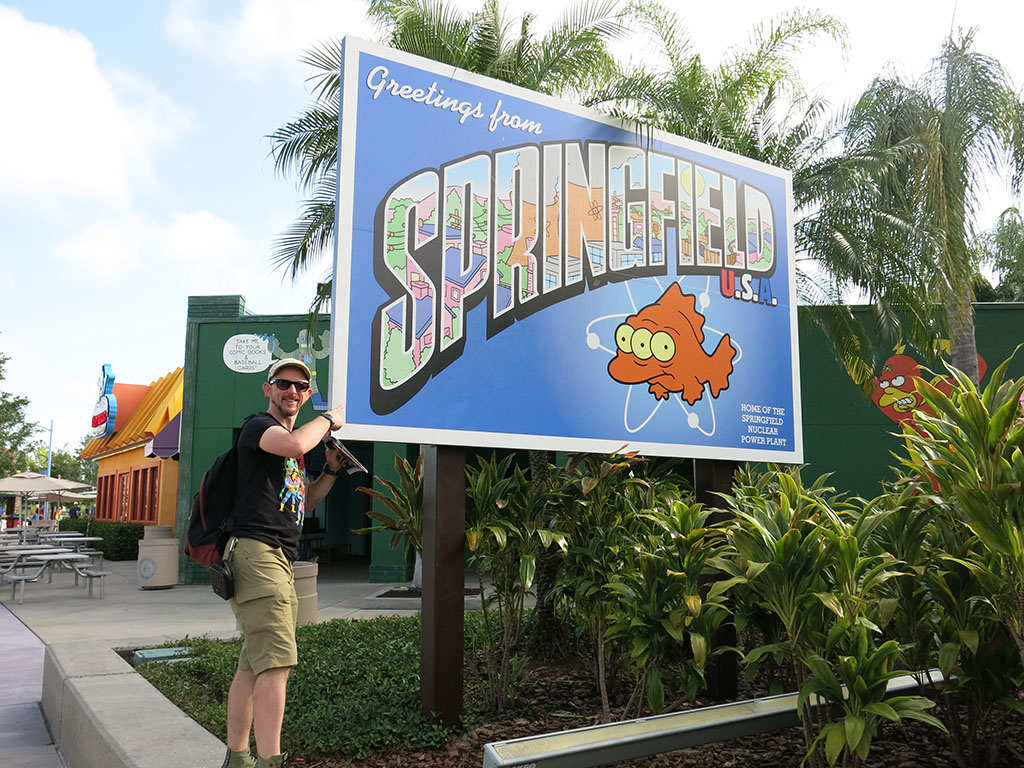 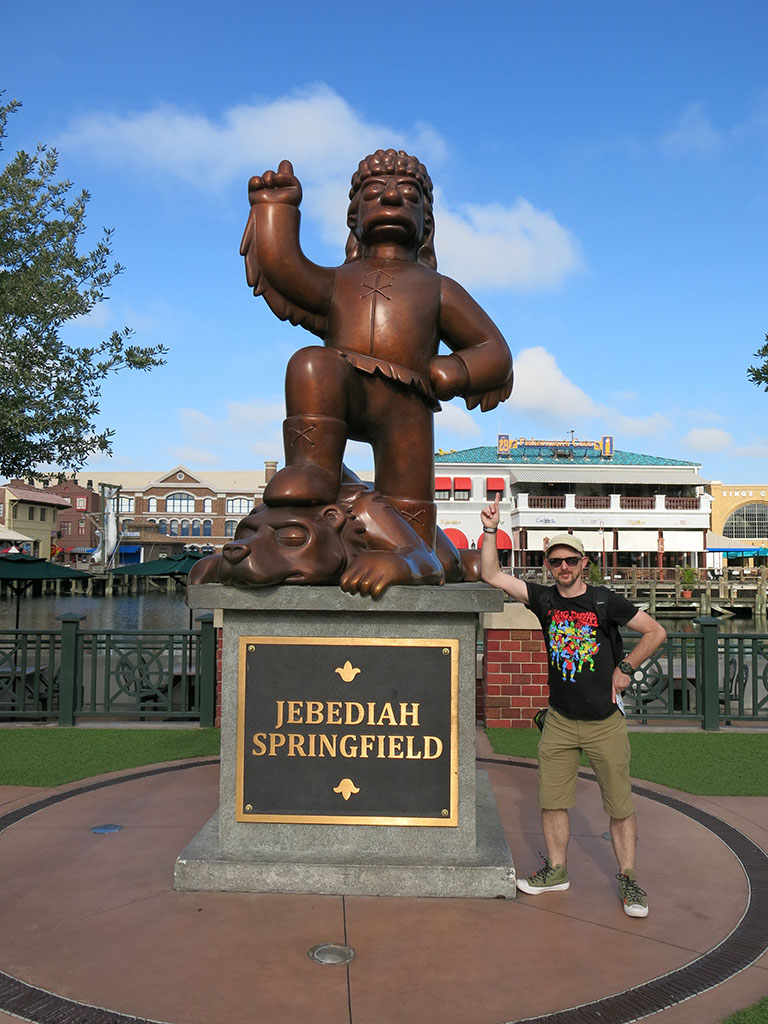 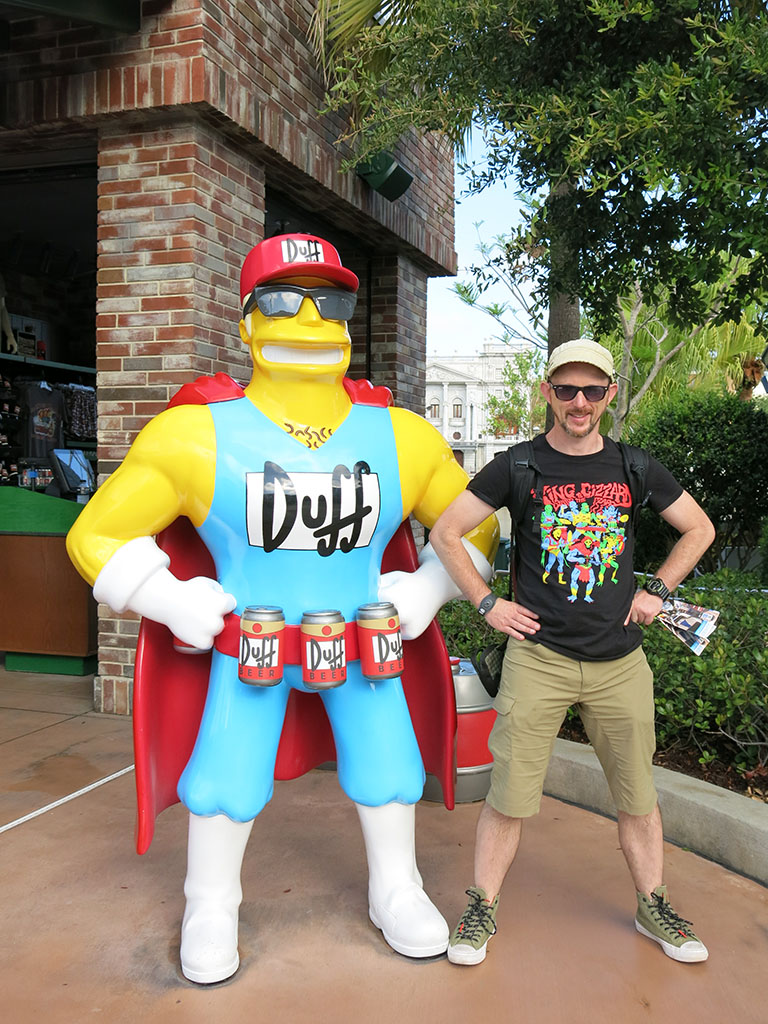 But it was not only Harry, but also the Simpsons that I was keen to see. As gates opened and we headed straight for Diagon Alley, we made our way through Springfield. Yes! We would come back later in the day, but I couldn’t help but stop with pictures with pretty much everything. The Springfield sign! Jebediah Springfield! Chief Wiggum! The Comic Book Nerds store! The Quickie Mart! Moes! Duffman! Queasy, Surly and Remorseful! I was grinning from ear to ear. 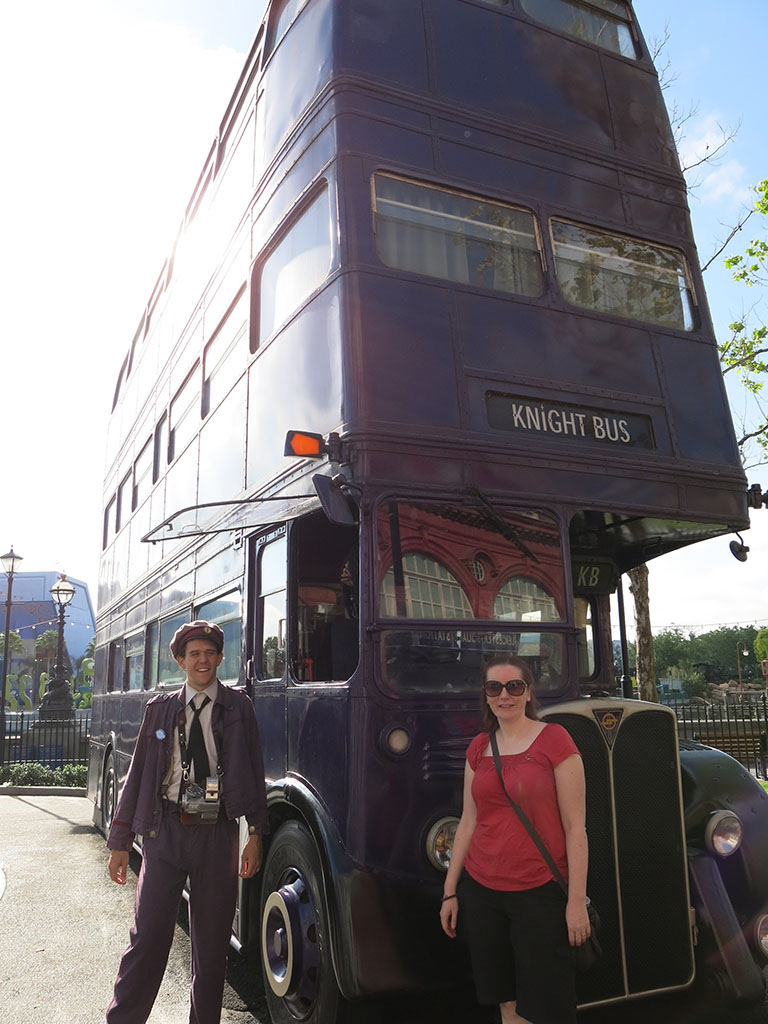 We moved quickly through there and arrived in ye olde London, specifically just near Kings Cross Station and also the hidden entry to Diagon Alley. Kate stopped for a quick chat with the conductor of the Knight Bus, as well as the shrunken head hanging off the read view mirror, who was actually pretty hilarious. 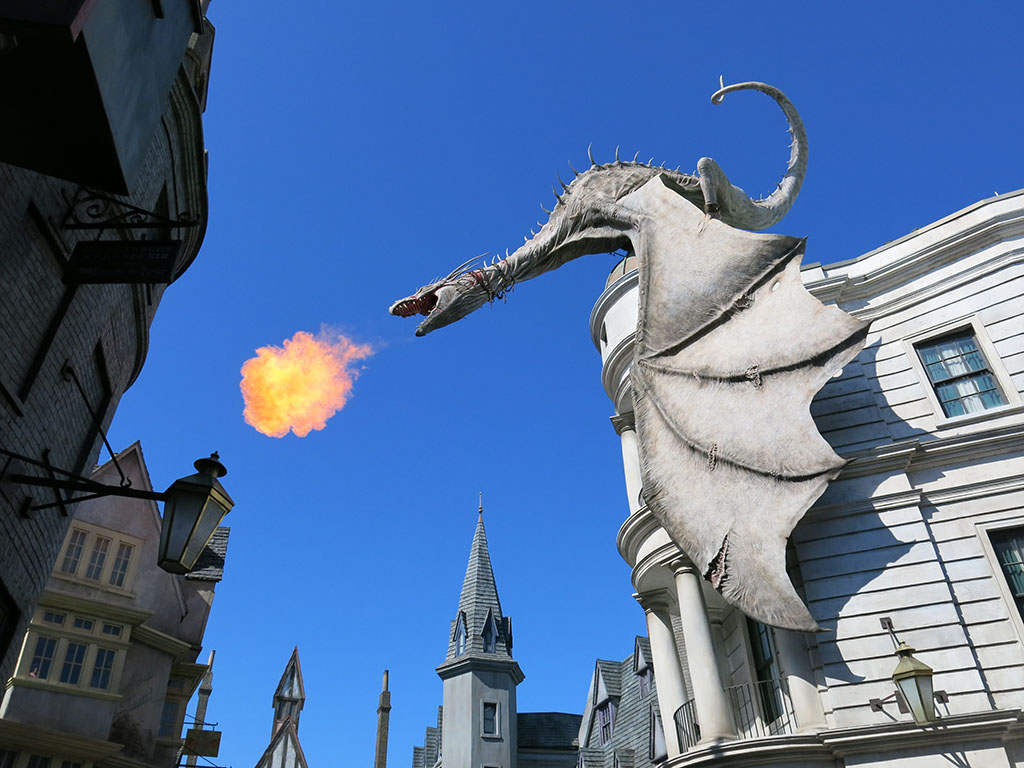 But we had rides to get on, so into Diagon Alley we went and headed straight for Gringotts. Having only one day at both parks, we had the aim of doing everything Harry, so made sure to get our ride on early. It seemed to be a quiet day so it didn’t seem like it would be too hard, but regardless we headed straight into Gringotts for the escape ride. 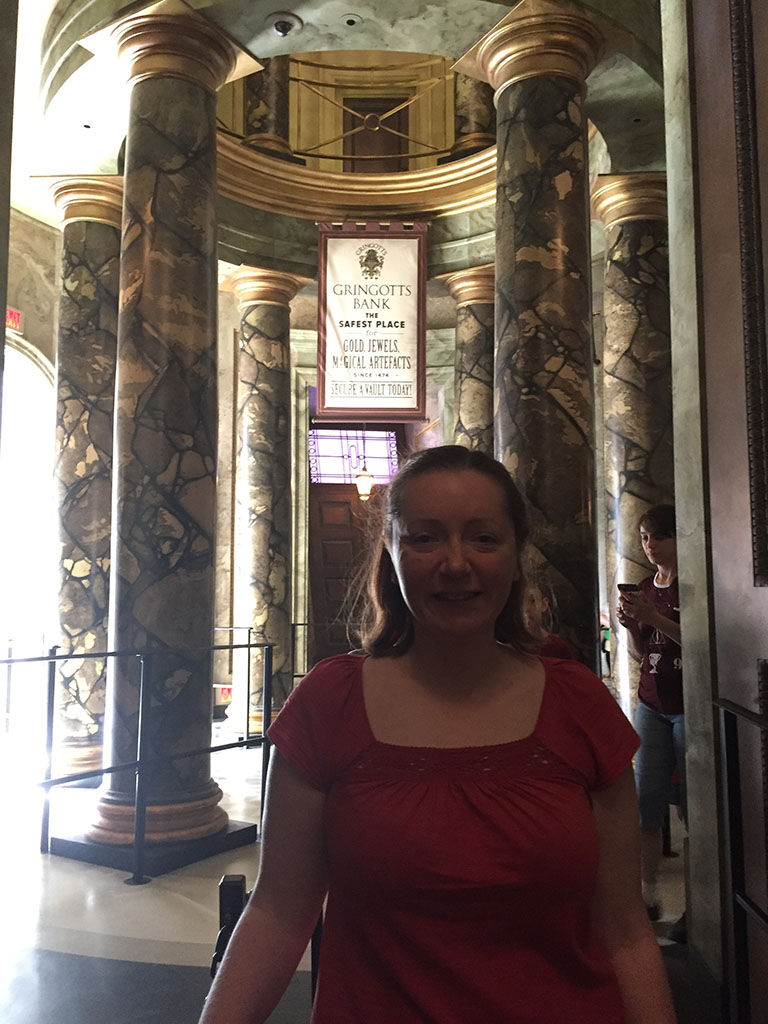 We wove our way through, meeting goblins and Bill Weasley who acts as your guide throughout. The gist of the ride is we are in a Gringotts cart when we meet Voldemort and Bellatrix and have to escape. So it is a fast mine cart like ride with amazing visuals and all kinds of thrills. BEST. RIDE. EVER. It was sooooo good. If it isn’t the best theme park ride it is right up there. The cart bit was great but the visual were stunning. Even Kate who doesn’t do motion rides was giddy. We got out and saw basically no line so went straight back on. We knew we would be back again later too. 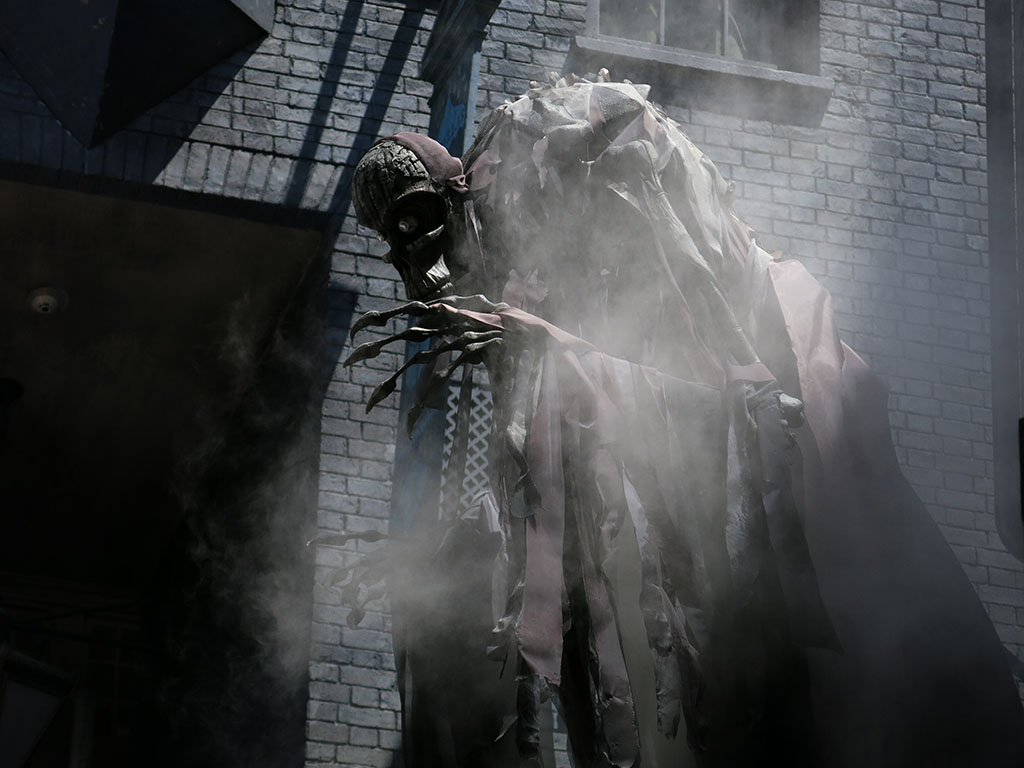 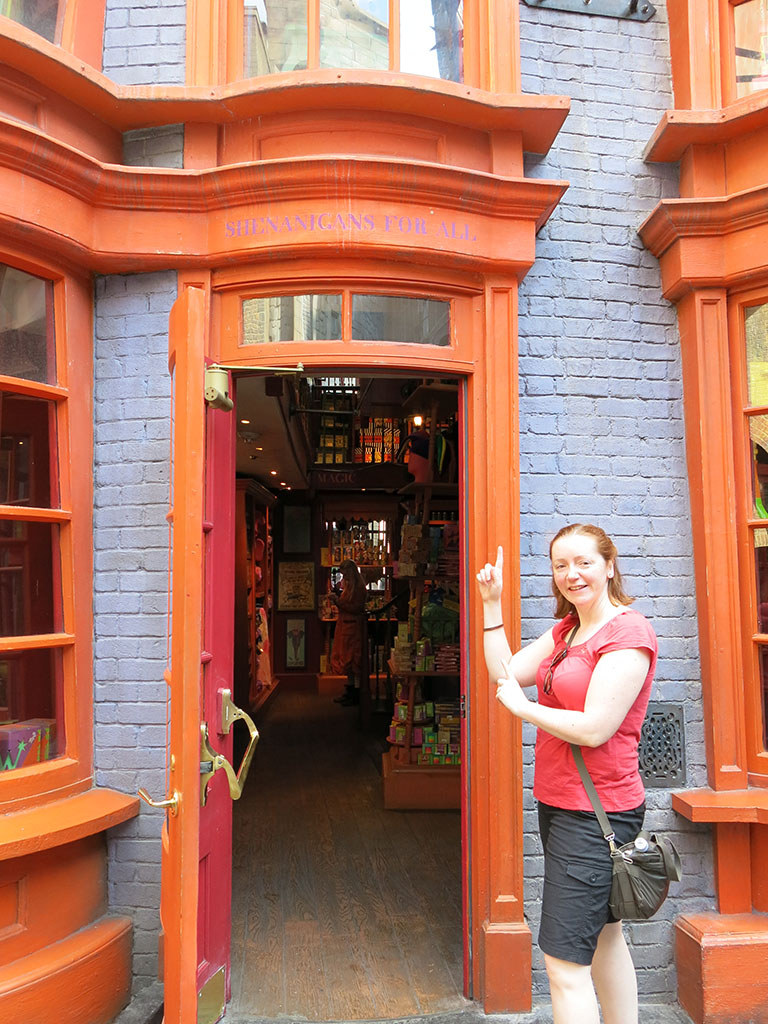 We spent the rest of the morning exploring Diagon Alley. That meant heading into Olivanders, where Kate spent time pouring over the wands and trying to make a choice. We also saw a few performances by the local acting troupe, who acted out stories of Beedle the Bard with some great puppets (similar to the style in the Deathly Hallows film). 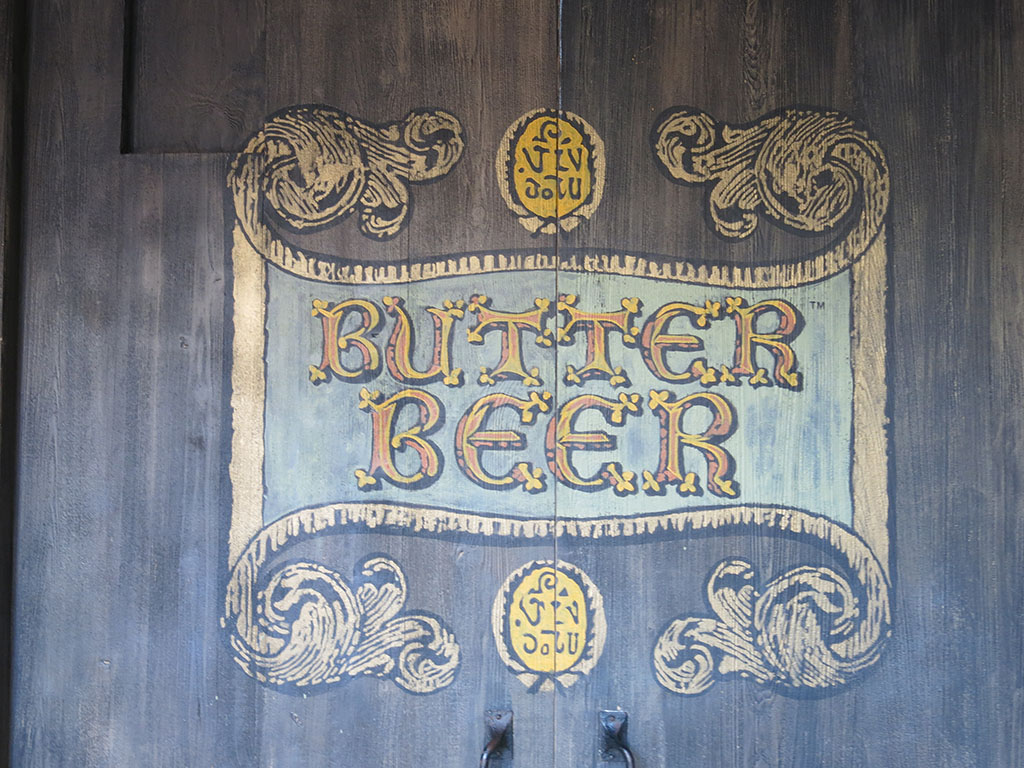 But a close second to the escape from Gringotts was the frosty goodness of frozen Butterbeer. Oh man. It was soooo tasty. My sister had given me a heads up about it, and it did not disappoint. Delicious!

By now we had seen much of what Diagon Alley had to offer, so on to the Hogwarts Express it was to head to the other park. The train ride is actually a bit of a ride, which makes it quite cool. You are in cabins just like in the movie and you are attacked by dementors on the way. A nice touch. 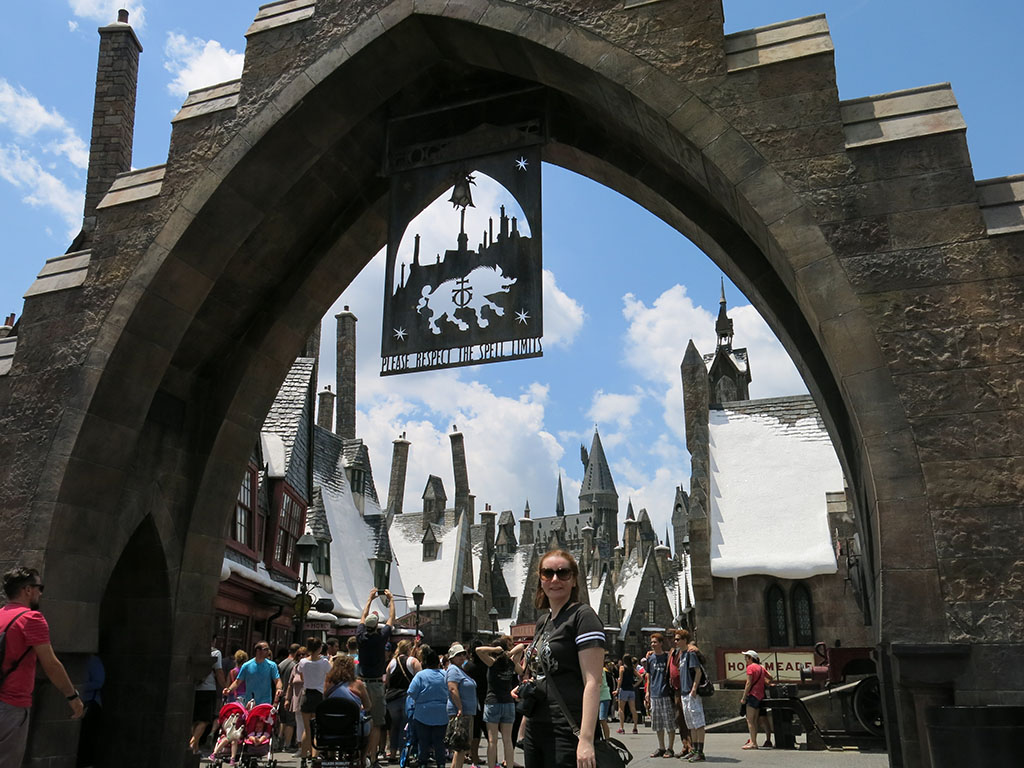 We arrived into Hogsmead at the other end and were greeted with a huge Hogwarts towering over us. It was pretty stunning and was actually the home of the Harry Potter and the Forbidden Journey ride, another dark motion ride. Again Kate was sucking up her dislike of motion rides to go on. Like Gringotts, there was lots to see in the line, but as there were so few people we moved through very quickly. In no time we were on the ride. This was similar to the Gringotts ride, however involved much more zooming and swooping and massive screens giving the impression we were zooming all about Hogwarts on our broomstick. Every now and then a dementor would pop out to give us a fright. At the end I LOVED it. Another best ride contender. Kate, not so much. This one was a bit too zoomy and was not her cup of tea.

It was time for lunch so into the Three Broomsticks it was for a bite, before exploring Hogsmead some more. We went on the Flight of the Hippogriff, a small roller coaster type ride, and I also went on the Dragon Challenge ride, a full blown upside down roller coaster. They certainly up the adrenaline at Universal. 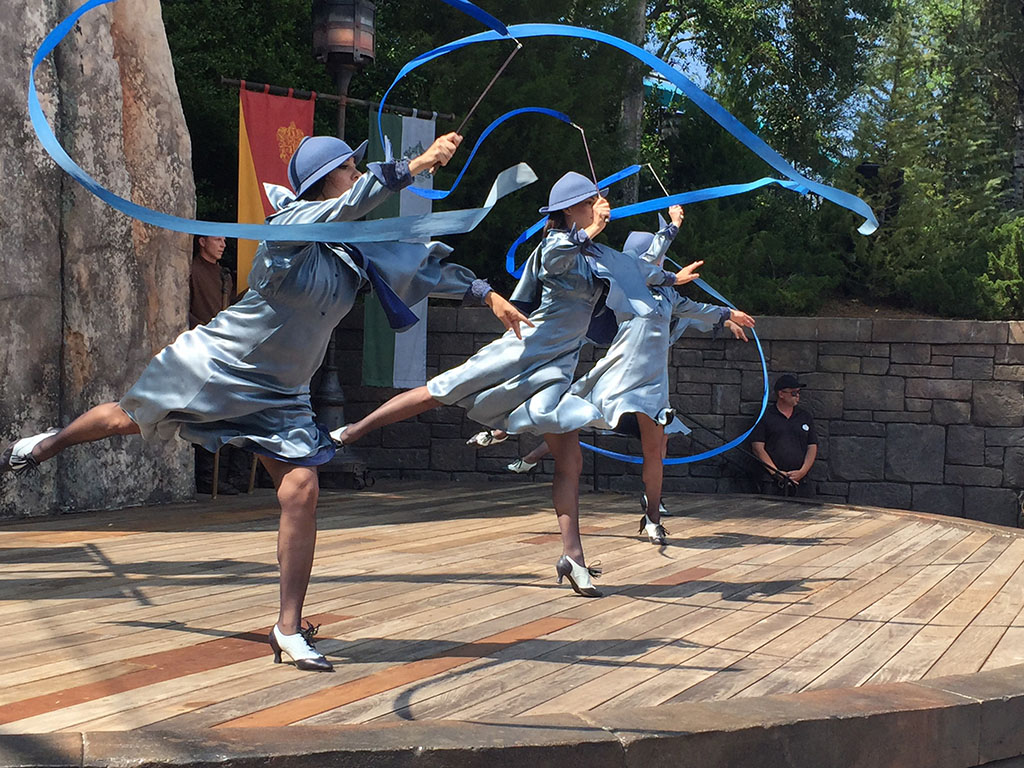 Like Diagon Alley there were some shows to see, with the students from the Beauxbaton and Durmstrang putting on a show. We experienced all Hogsmead had to offer and with only an hour before this side of the park shut, we did a quick scoot around the rest of the park. To be honest, there was not much in the rest of the park of interest. I went on to a Spiderman ride that was a mix of motion and sets and 3D that was actually pretty good. But otherwise not much else was of interest. 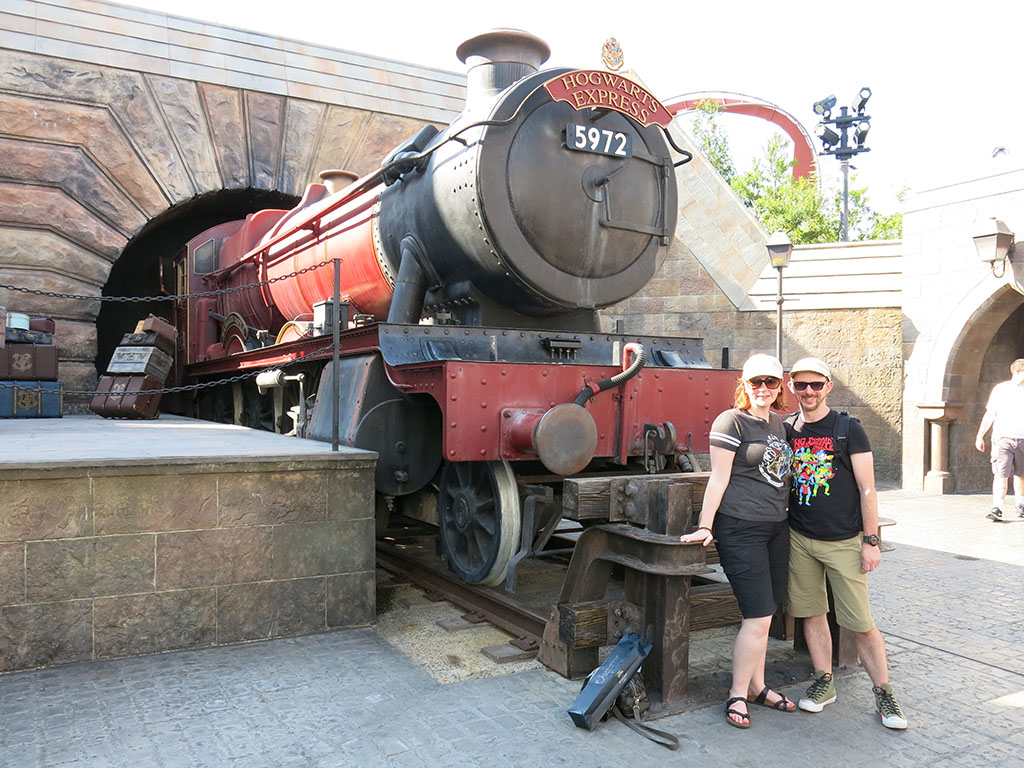 So back onto the Hogwarts Express it was back to the other park to get some more Gringotts, before exploring the Simpsons land a little. I went on the main Simpsons ride that was a Star Tours type ride… a motion simulator ride that was kinda fun. They had a fair bit of the Simpsons humour in there. 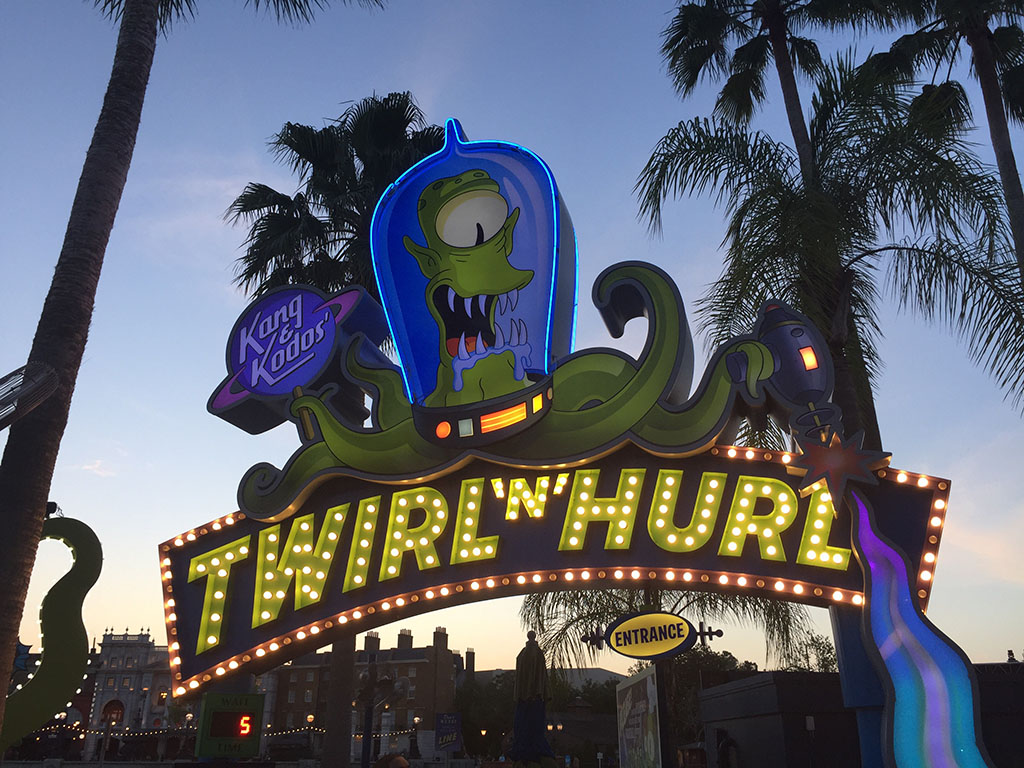 And with that we were done. 9pm had arrived and it was park closing time. We were happy to have gotten everything we wanted done, and as we thought, Harry was the clear highlight. With the Potterverse done, we were content and ready for more Disney.