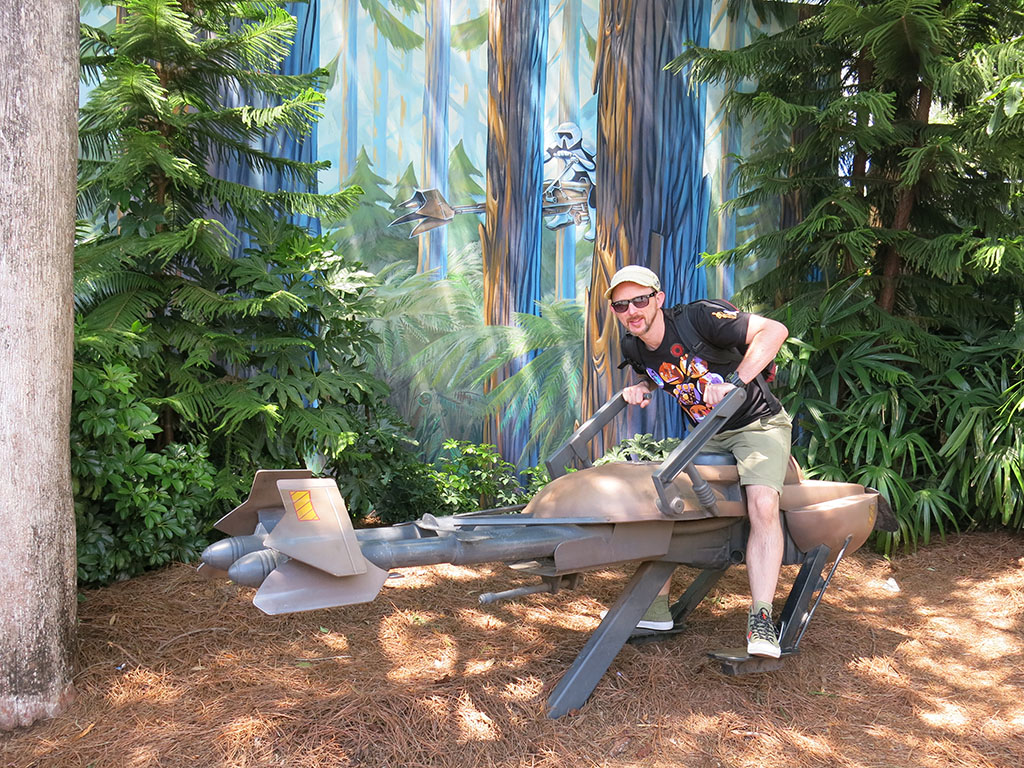 Having done the parks, we had the luxury of picking and choosing what to do for our final couple of days at Disney. We knew we were going to do one more full day at Magic Kingdom, but today we thought we would bounce around a bit between a couple of parks and Disney Springs. So with a relatively lazy start (leaving the room at 9am), we made our way back to Epcot to start the day. 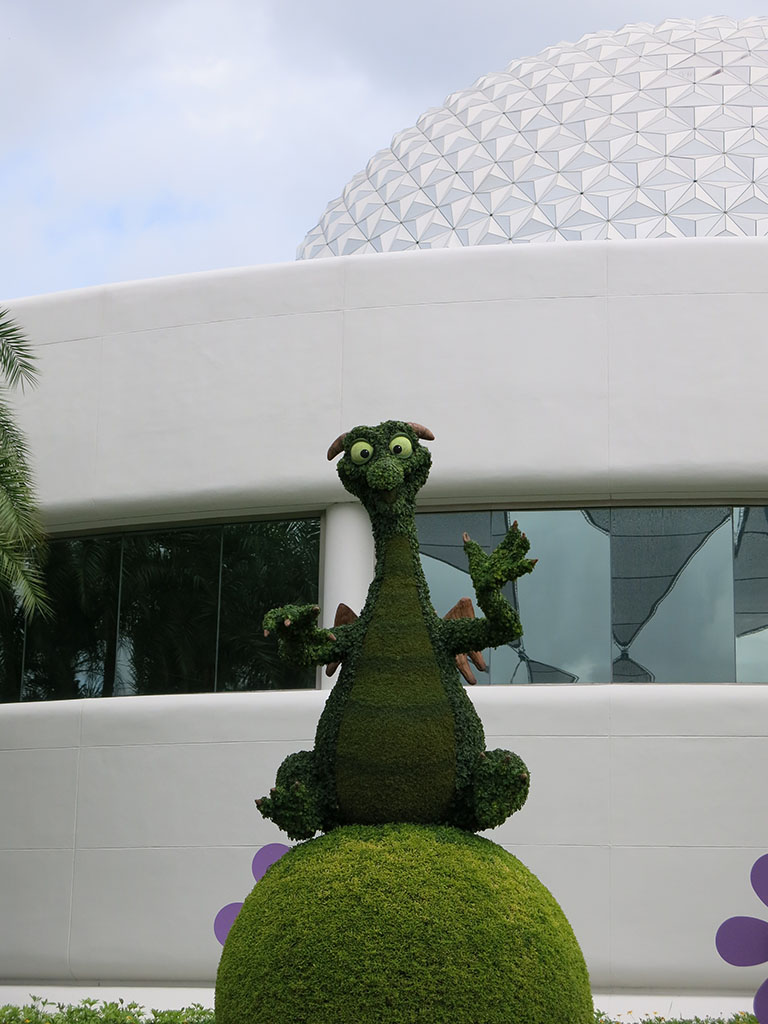 Why Epcot? We were pretty content with our day at Animal Kingdom, that we got everything done we wanted to. We planned to go back to Hollywood Studios to go on our favourite rides again, but we rushed through a bit of Epcot and also were frustrated by the wait (and non-ride) of Frozen Ever After, so we headed back to fill that gap.

Frozen Ever After, as I alluded to earlier, is the most popular ride at Epcot. In part because it is Frozen, and mainly because it is the newest ride. As such, Fastpasses are very difficult to get. So first thing we headed there and had the luxury of only having to wait 15 minutes or so to get on. 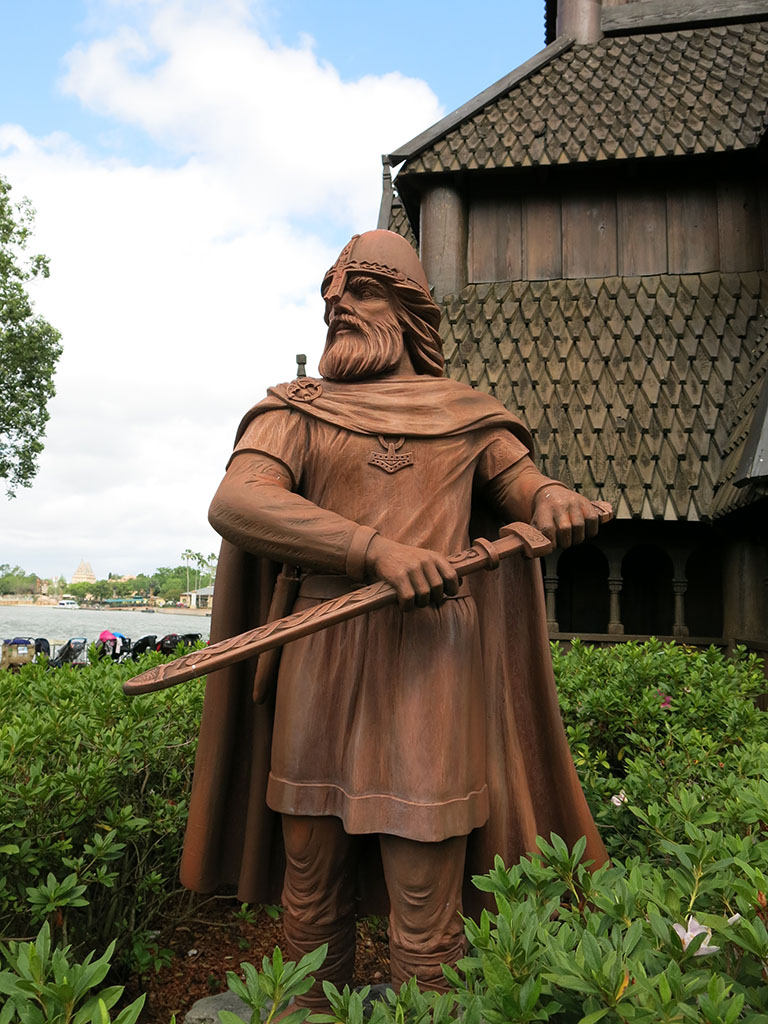 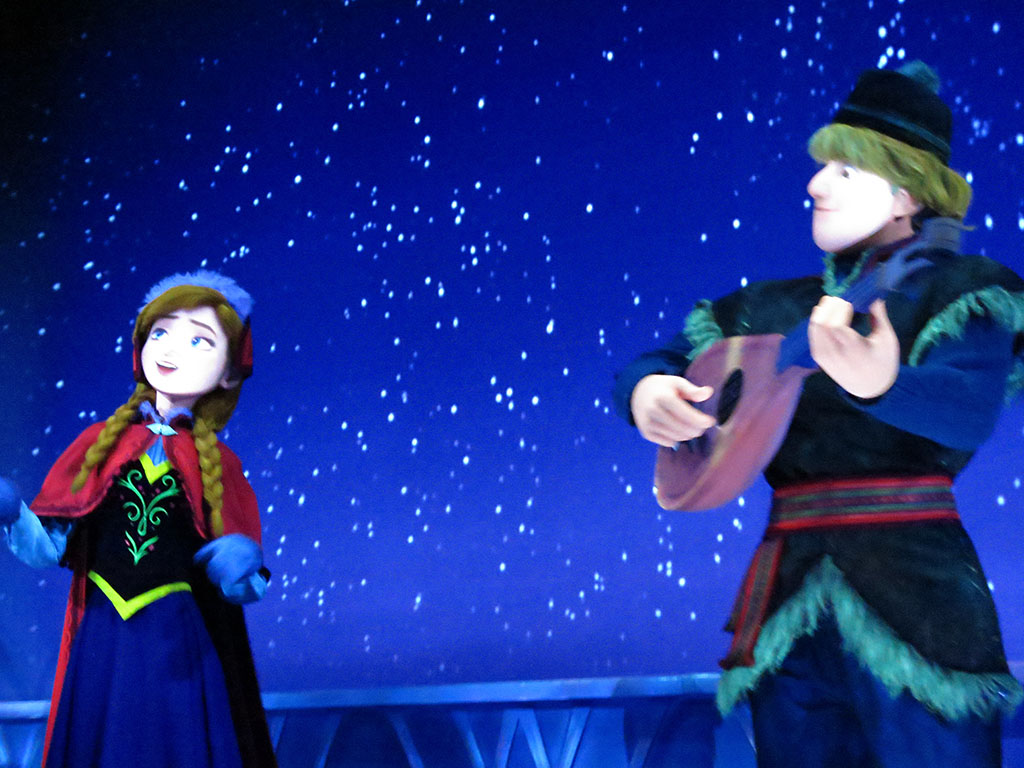 thankfully they were not singing let it go

And how was it? It was alright for one of the slow boat-type rides. Given it is a few decades newer than most of its type (i.e Pirates), the animatronics were a lot better, with animated faces rather than the weird puppet like figures that is the norm. There wasn’t too much “Let It Go” either which made even more pleasant. As we docked to end the ride, there was basically no queue, so around we went again! Why not given we were going to head off from Epcot soon.

We wandered the international part of Epcot for a bit, which we had some trouble doing last visit due to the rain. In many respects if I had an annual pass to Disney here, I would end up spending a bit of time in the International Showcase at Epcot. Mostly because it is not about waiting for rides, rather than chilling out eating and drinking, so I could imagine it would be fun with a bunch of people to pick a country and hang out there for a few hours.

So after a couple of hours of wandering, we decided to head off to Hollywood Studios. Conveniently, a boat connected the two, so on to the boat we jumped and 20 minutes later we were at the doorstep of our second park. 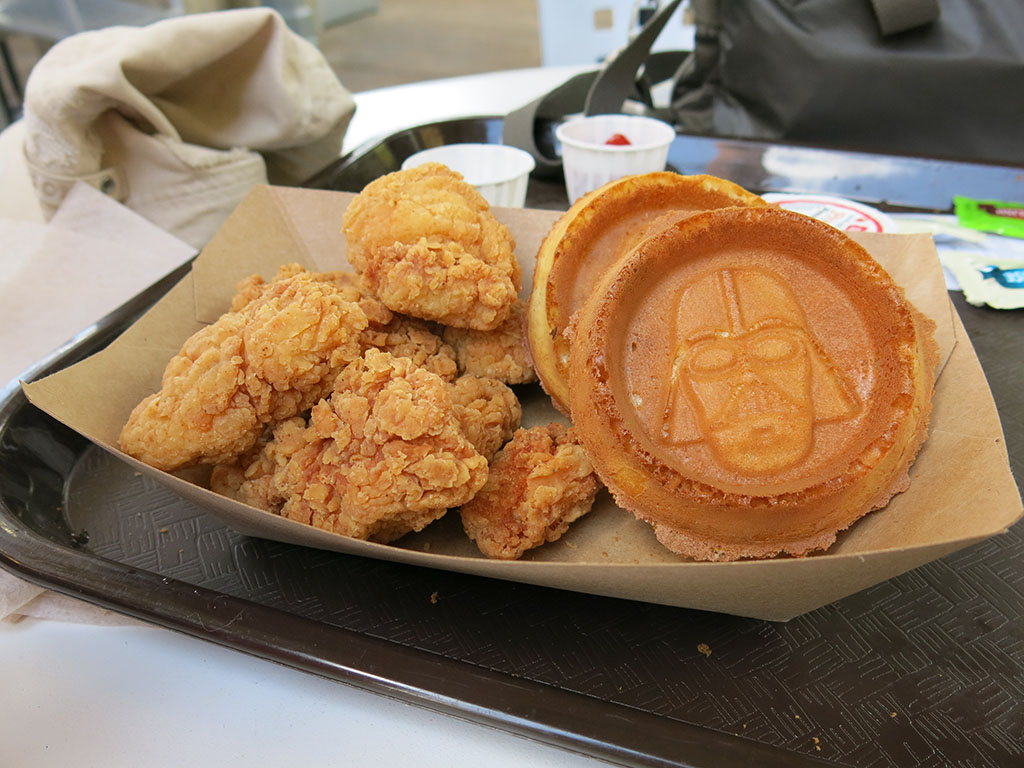 We didn’t really have much of a plan here… we just knew that we were more likely to jump on random rides we liked here more so than Epcot. I went straight for Star Tours to see where I could end up. Sadly another pod race, but I did get to zoom around the Wookie planet which was fun. No Endor unfortunately. Kate took the opportunity to have some Darth Vader waffles from the nearby eatery. Why not hey? 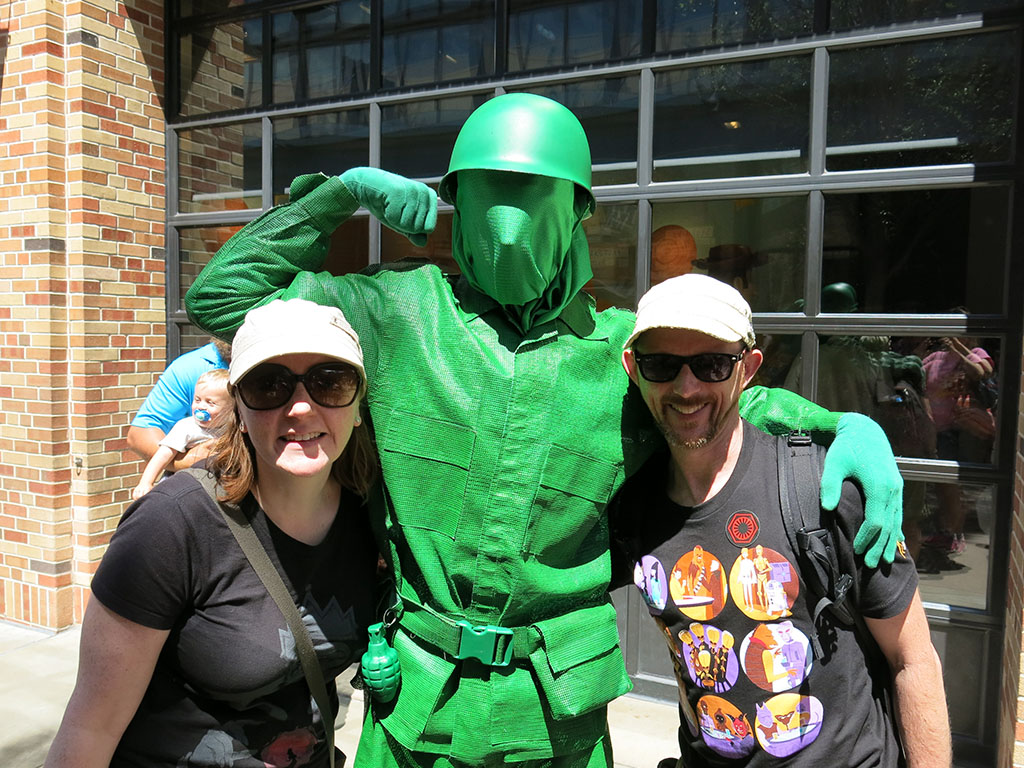 With our magic bands and the app we scored some fast passes for Toy Story Mania which is always ace fun. We even bumped into some Army Men out front and joined in with their drill.

I had neglected one main ride here, mostly as it was a Kate no-go-zone, but also because, well, it seemed a bit kitschy. Rockin’ Roller Coaster starring Aerosmith. Yep, Aerosmith. That immediately dated the ride a bit, but it was a full on rollercoaster, so the opportunity arose and I jumped. The ride was just as I thought. After a VERY dated kitschy opening (apparently we had to rush to the gig!), it was onto the rollercoaster and off on what is probably the most adrenaline filled ride in the Disney Parks. Imagine Space Mountain but way faster and amped up and that is Rockin’ Rollercoaster. Good fun once it got underway… they probably just need to think about replacing Aerosmith. 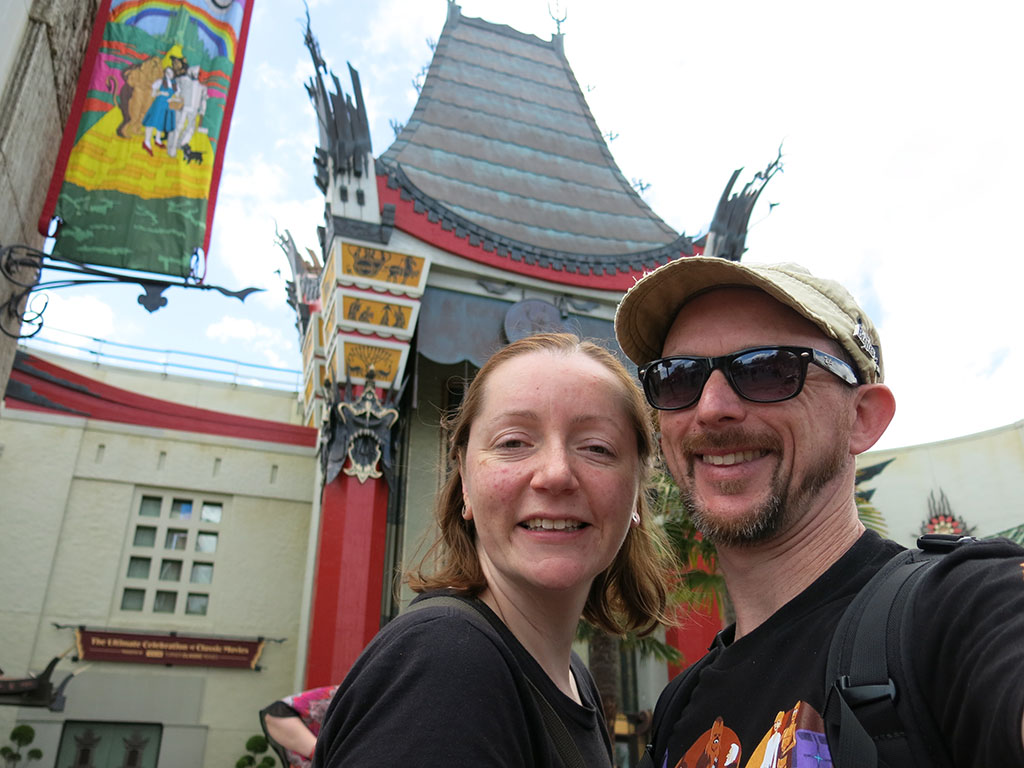 As you may notice too, it was May 5th. May 4th is a BIG day in the Star Wars universe, but sadly the parks don’t seem to do too much. We had checked, and there was nothing worth coming to Hollywood Studios yesterday that was special, outside of a chance to buy a limited t-shirt. So we kept our Animal Kingdom plans. But being there on May 5th (which is also the lesser known celebration day… i.e Revenge of the 5ith) gave me a chance to pick up to limited pins that are only sold on these two days, one for each day. I nice specific memento for our trip.

We rode some rides some more (I hit up Tower of Terror again) and then at dinner time decided we should head to Disney Springs for an opportunity for some better food and drink. Kate had found a bar to try out, so on to the bus and in no time we were there. 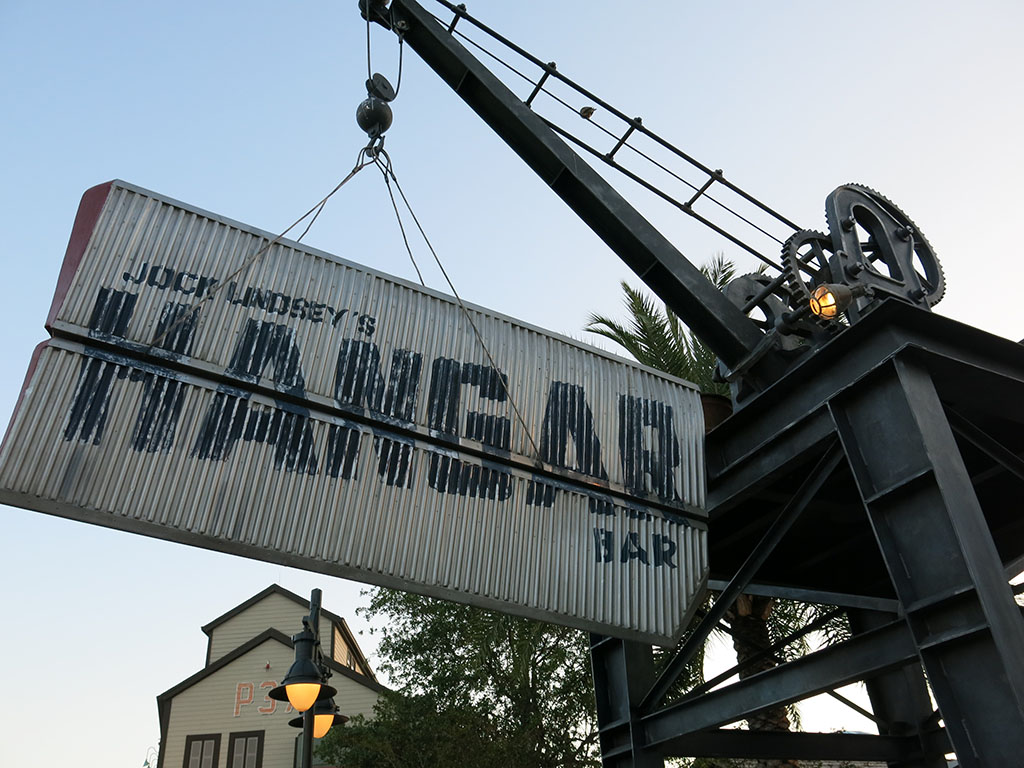 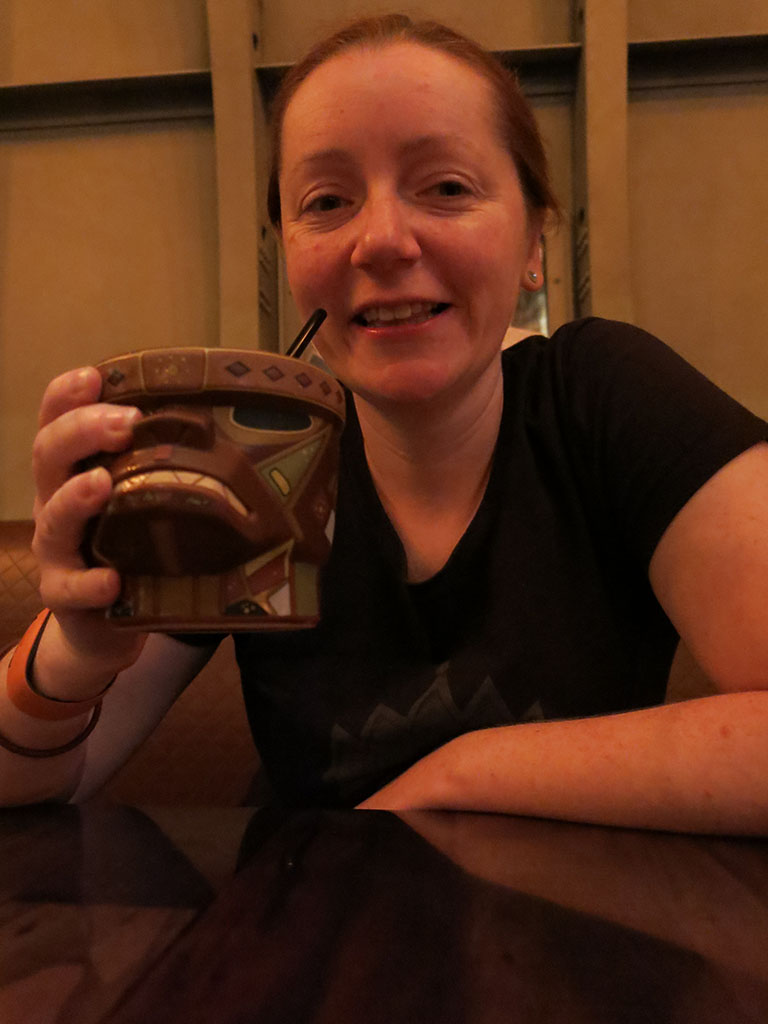 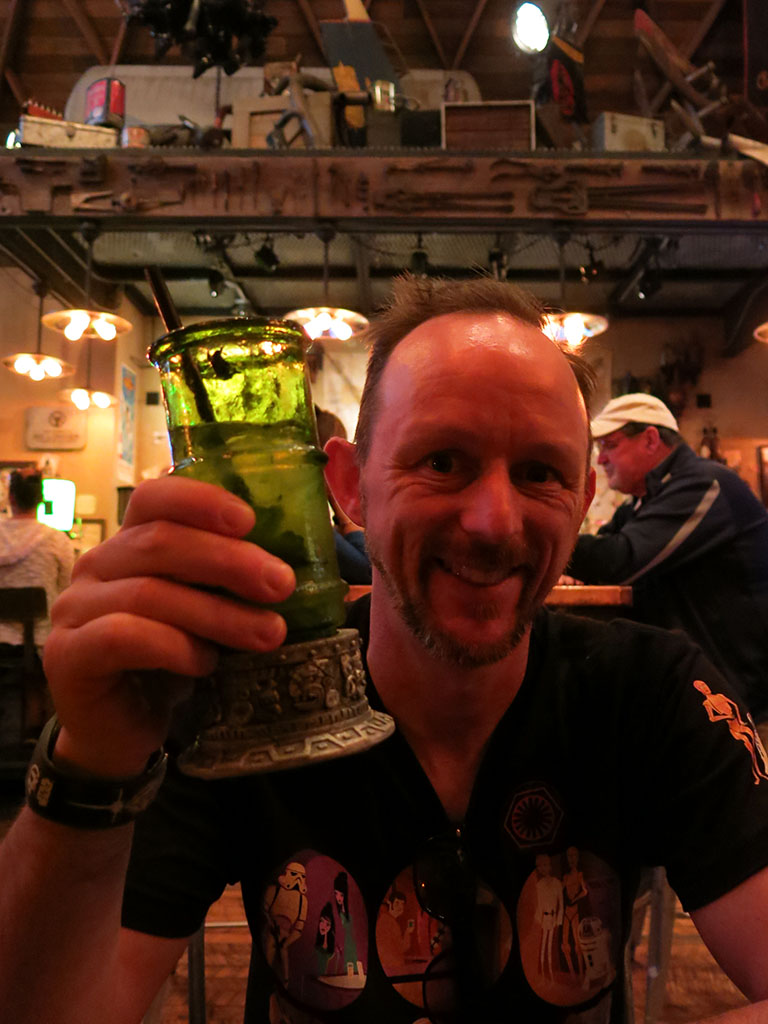 The destination was Jock Lindsay’s Hanger Bar. Who is Jock Lindsay? He is the water-plane pilot at the start of Raiders of the Lost Ark, and it was his bar apparently. It was pretty cool, done up with all kinds of ephemera, including the gold idol hiding up on a shelf. Here they also had special cocktails and mugs, so of course we opted to try the one that came in the monkey head. We also had some good food to go along with our strong drinks which made a nice end to the day.

A bit of a wander around the rest of Disney Springs, and we drew a close to the penultimate Disney day.