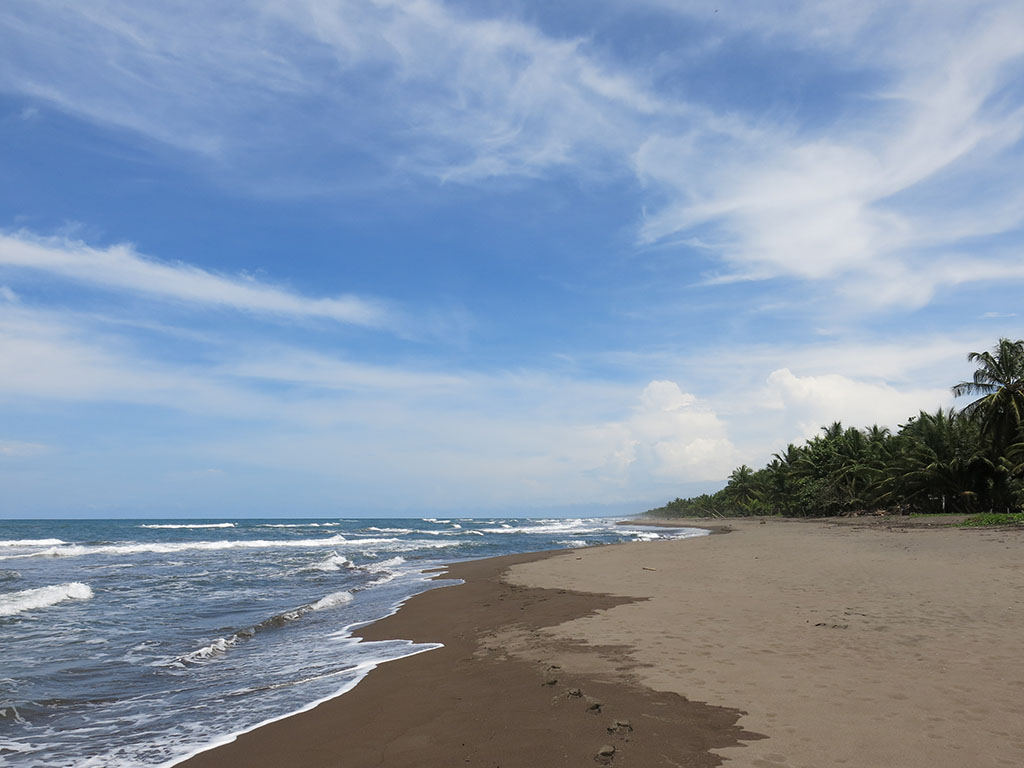 didn’t i say jungle? well, there is a whole lot of beach too on the Caribbean side of the country

Our first proper day in Costa Rica! And it began nice and early with a 6:30am departure from the hotel as we had a fair bit of ground to cover. We had to make our way from San Jose to the Caribbean coast and the island town of Tortuguero, which we were told would take about 7 hrs. 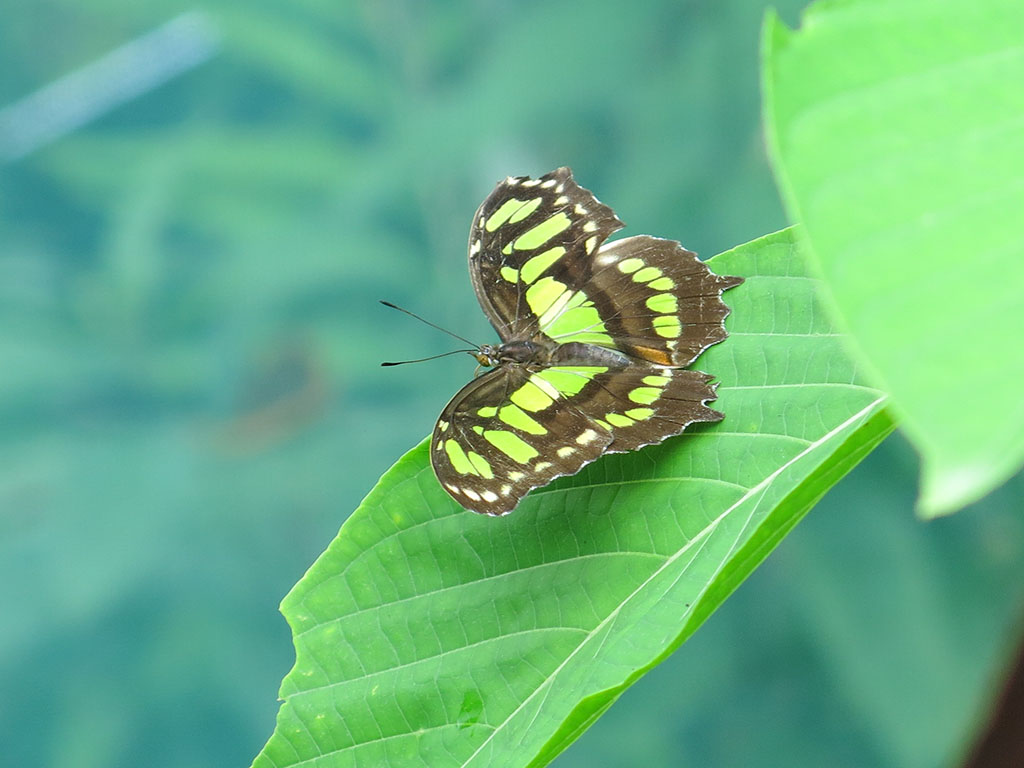 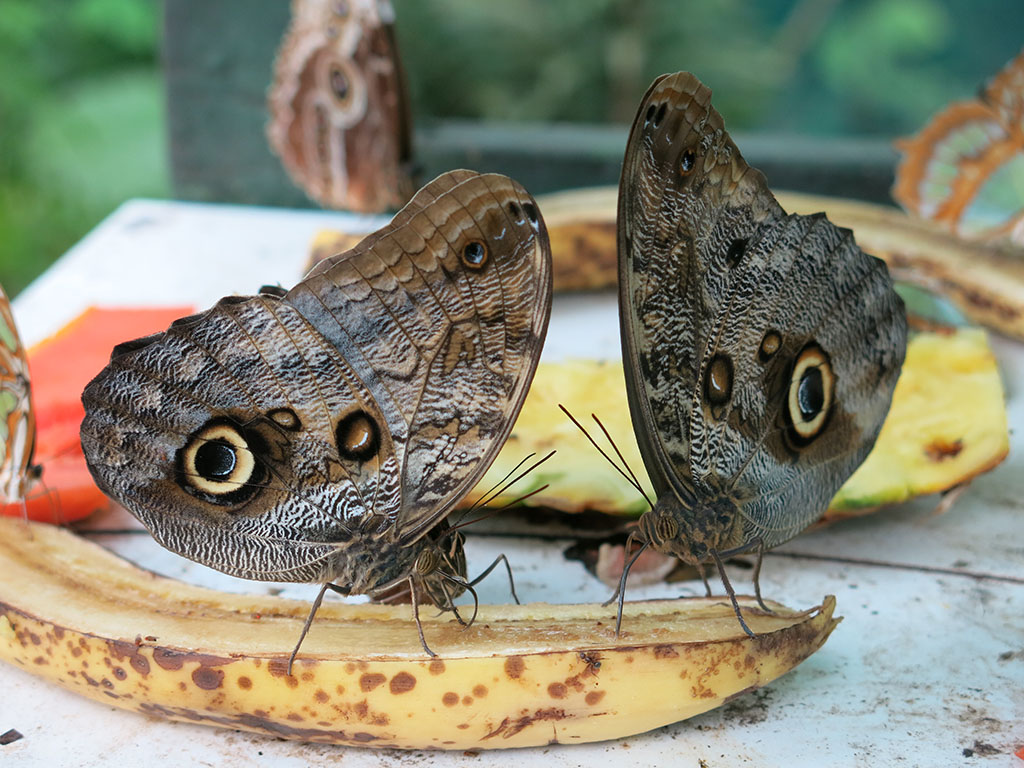 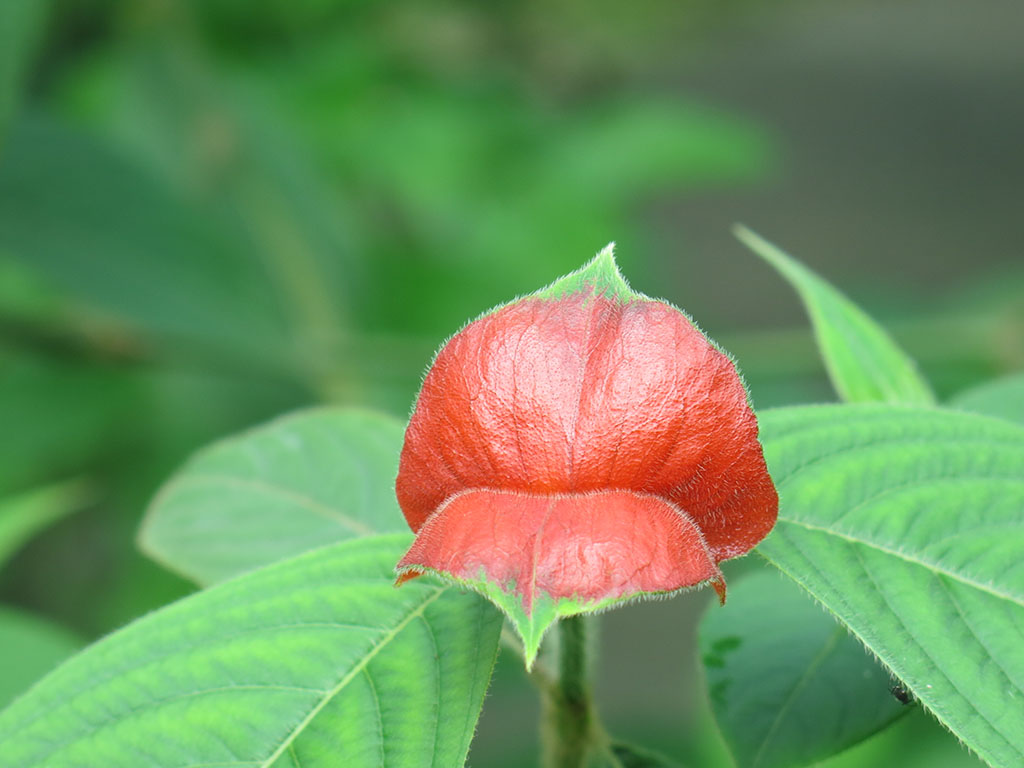 Given our previous travels around parts of Central America, we were expecting a slightly arduous bus journey, however it was all quite luxurious (relatively anyway). A short 1.5hr bus got us to a nice breakfast (the first of seemingly many beans and rice combos) and wander in a butterfly garden. Another hour then took us to a small port where we all loaded onto a small boat and into the winding river. 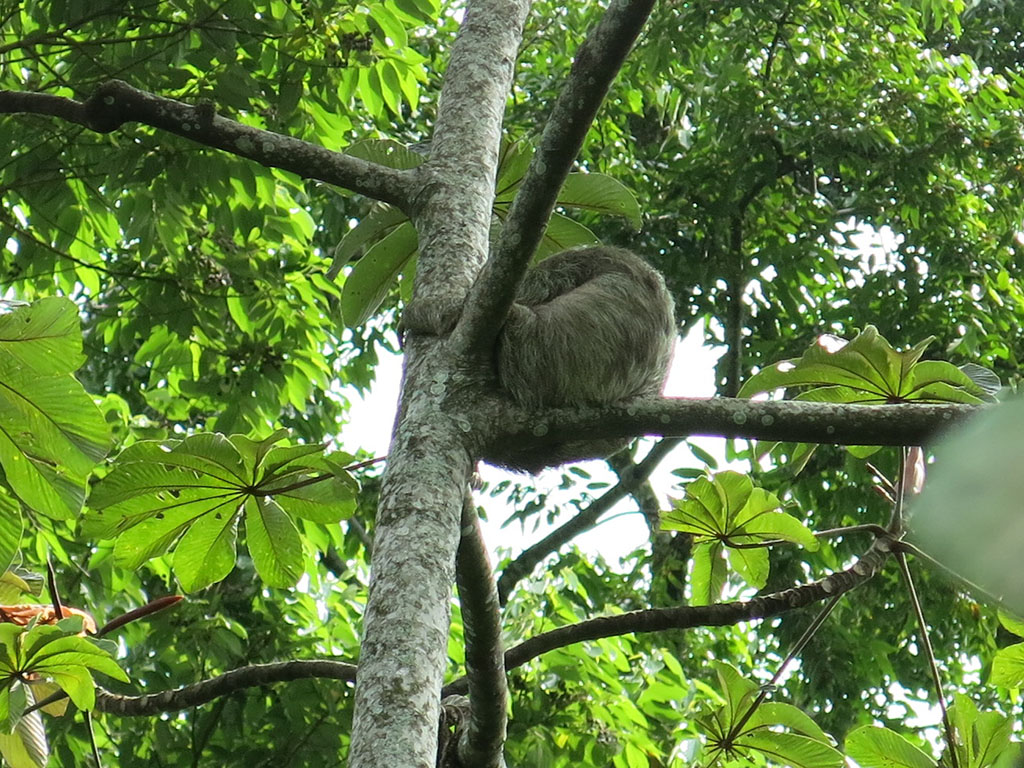 Just as we were leaving and hitting the road, we quickly pulled over. Kenneth, our guide for the next few days had spotted something. SLOTH! We couldn’t believe that in our first few hours here, we got to see a sloth in the wild. Sure he was a bit high up, but it was super exciting. First mission accomplished in the first day! Hopefully it was the start of many more sightings.

We felt we were going deep into the forest (forest? jungle?) as we wound our way around, keeping an eye out for wildlife. For the entire journey we had been super fortunate to have quite blue skies, making for a fast and pleasant journey. Given we were entering the rainy season, and we were heading into the wettest part of Costa Rica, we felt things were on our side. 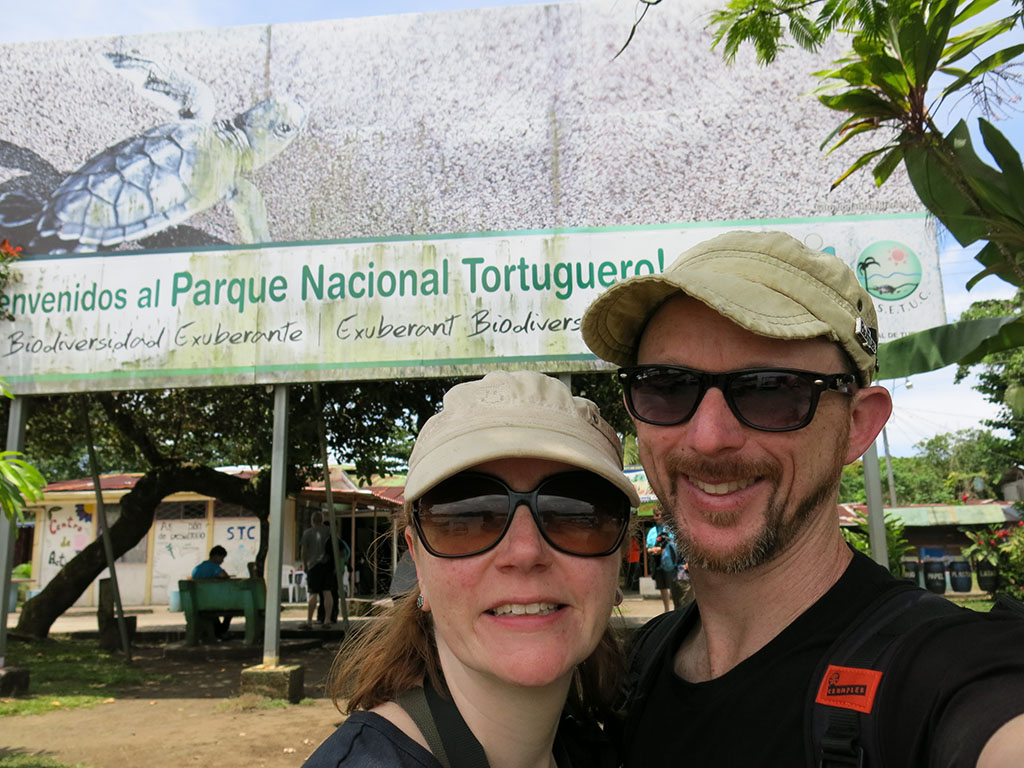 the home of turtles!

After an hour or so we arrived at the small town of Tortuguero. Tortuguero lies on a small island, nestled between the rivers and the Caribbean Sea. Only home to about 1000 people, it is a quaint town fuelled by tourism, mostly to see the turtles that come at different times of the year to lay eggs on the beach. It is also home as a result to one of the world’s leading turtle research centres. We knew we were in between seasons for the leatherback and green turtles, but fingers crossed we would get a chance to see some either at the tail end or start of their seasons. 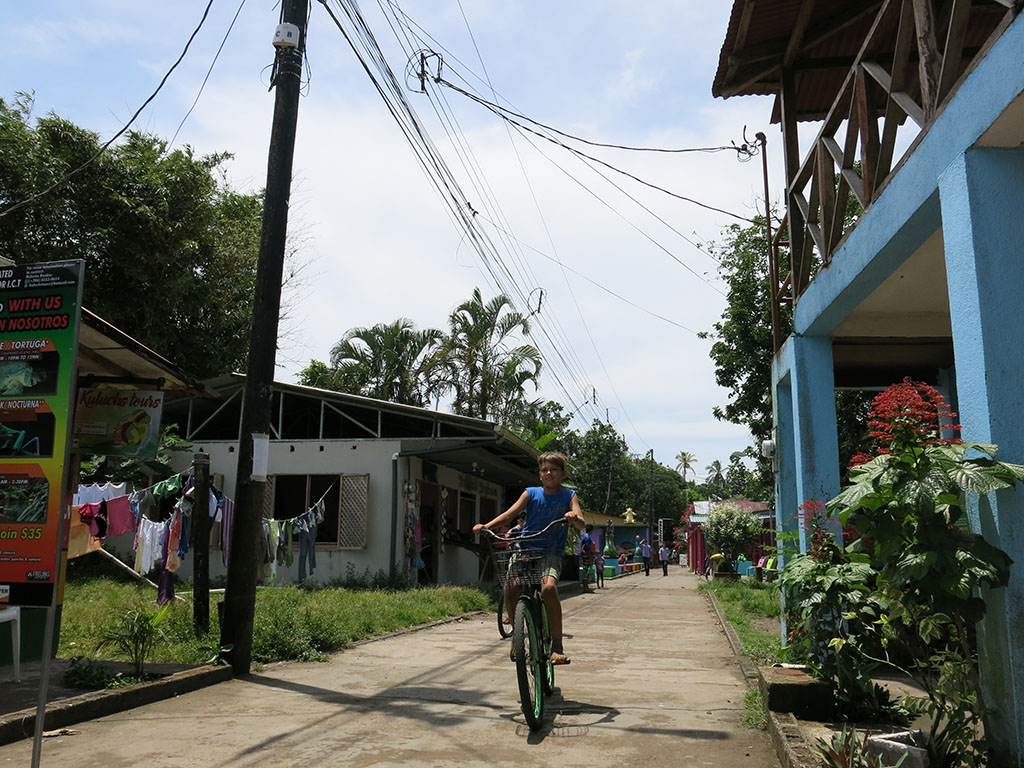 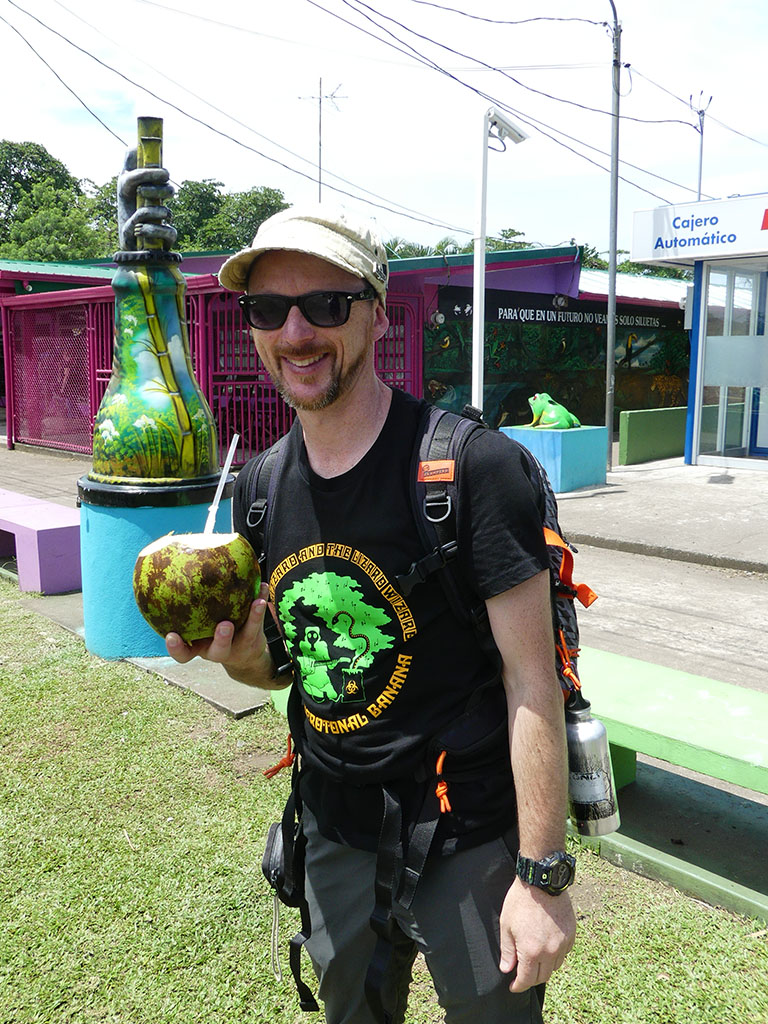 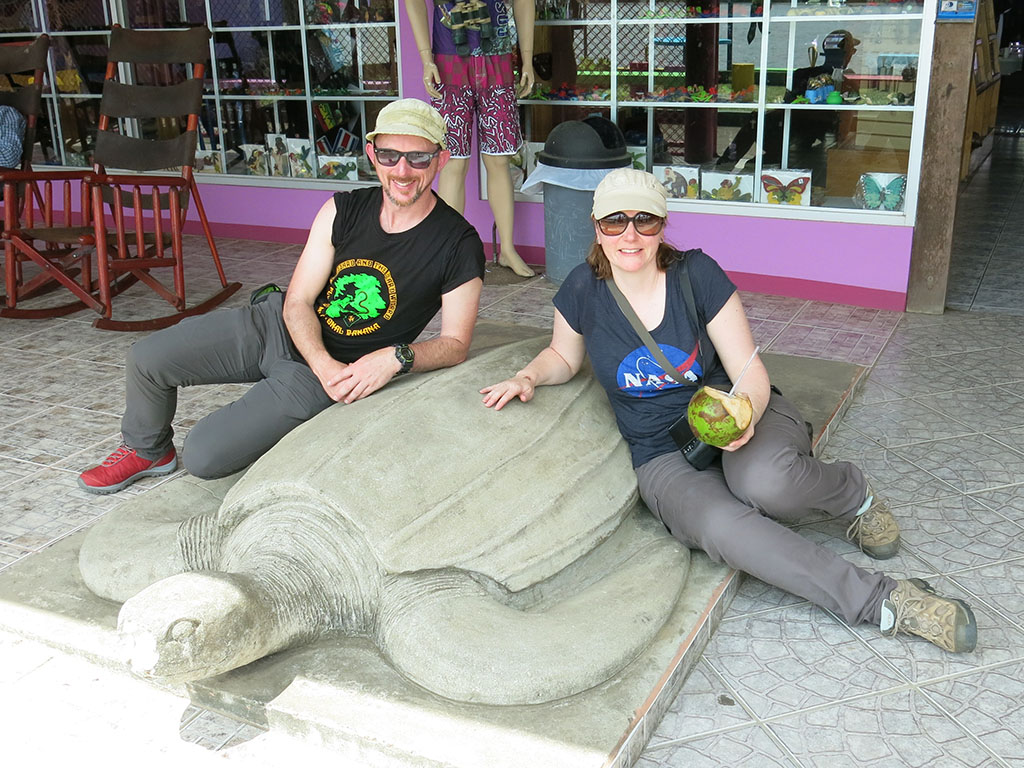 this turtle is actually life size 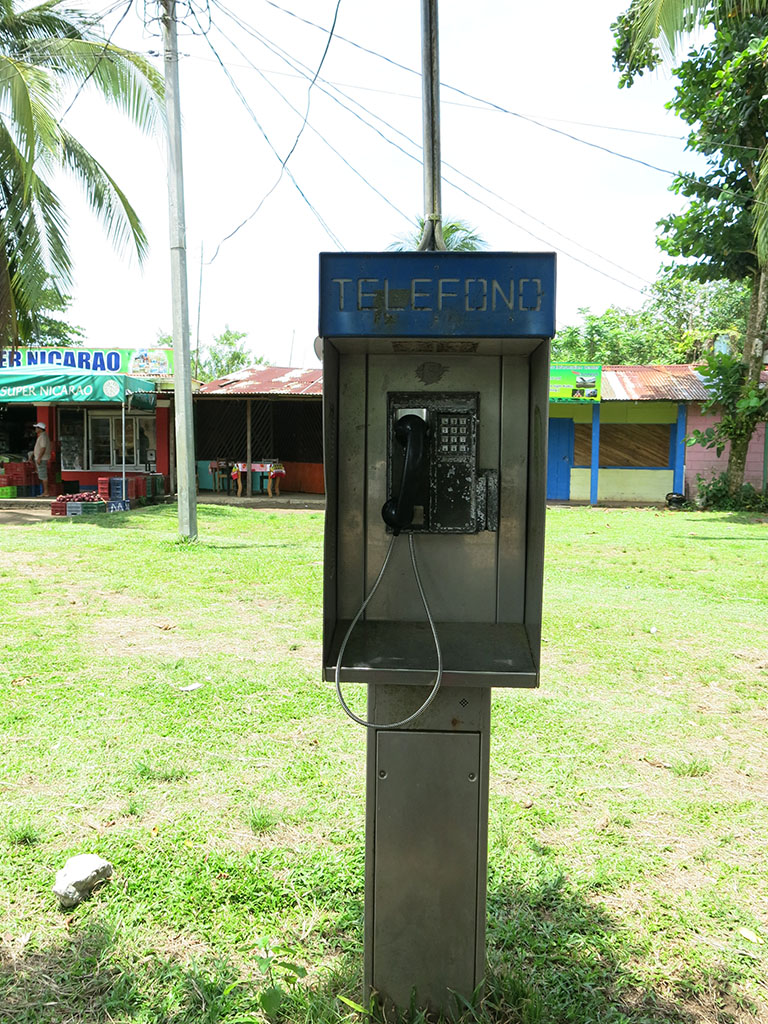 the extent of the technology here 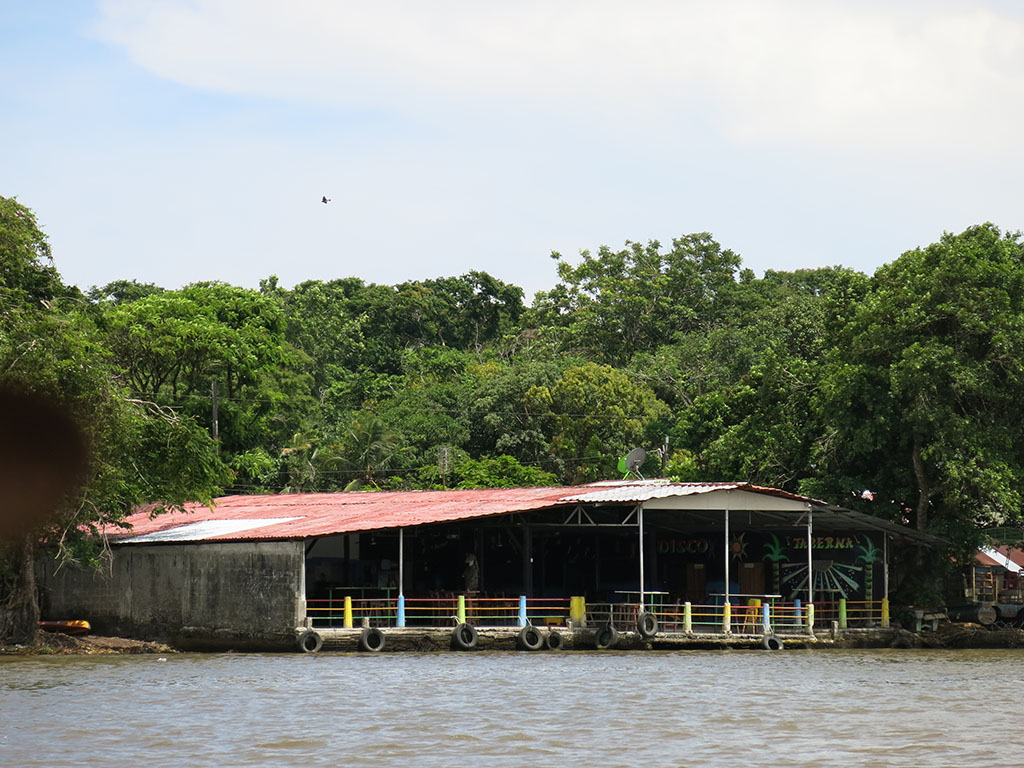 With a quick stroll around town, it was onto another boat to get to our home for the next couple of nights, the remote Turtle Beach Lodge. Nestled in the forest with the rivers to its front and Caribbean to its rear, it was nice to be out of complete contact… no wi-fi, no phone, no one except the small number of visitors at the lodge. Ah, that feels good. 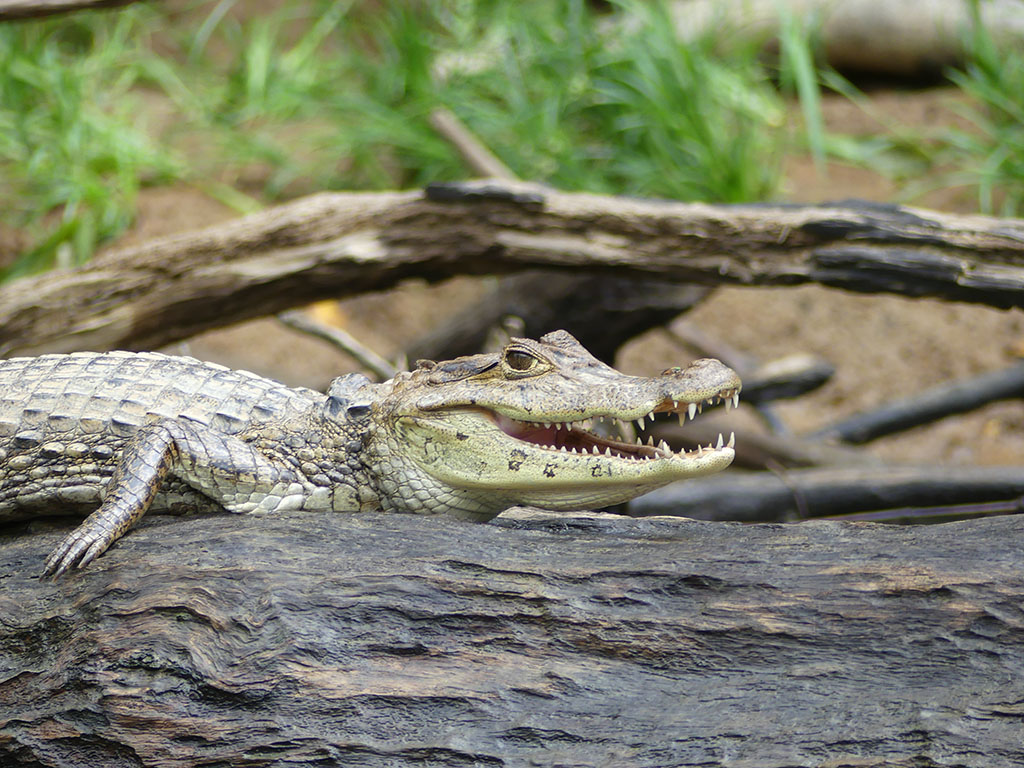 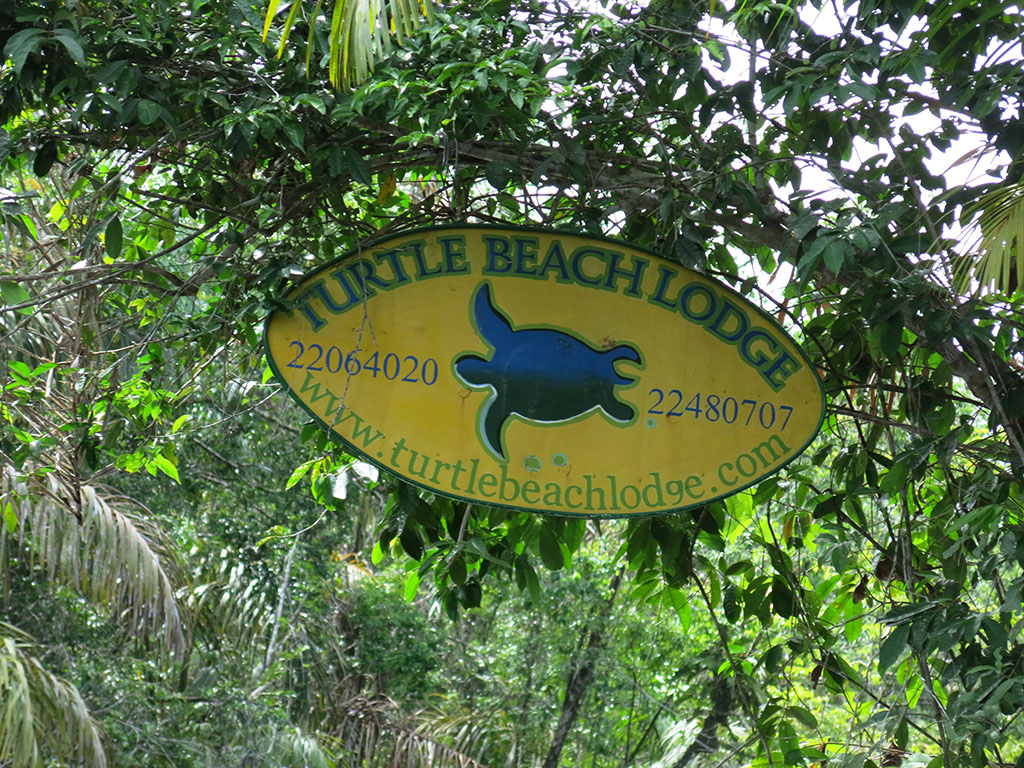 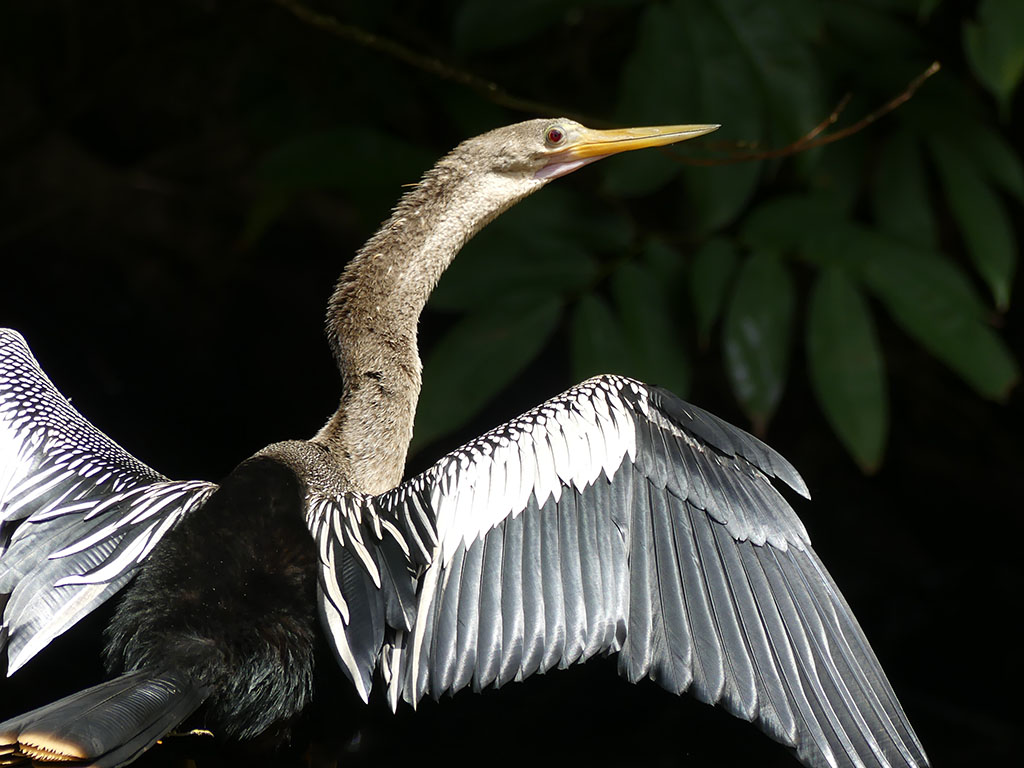 … and a friendly welcome 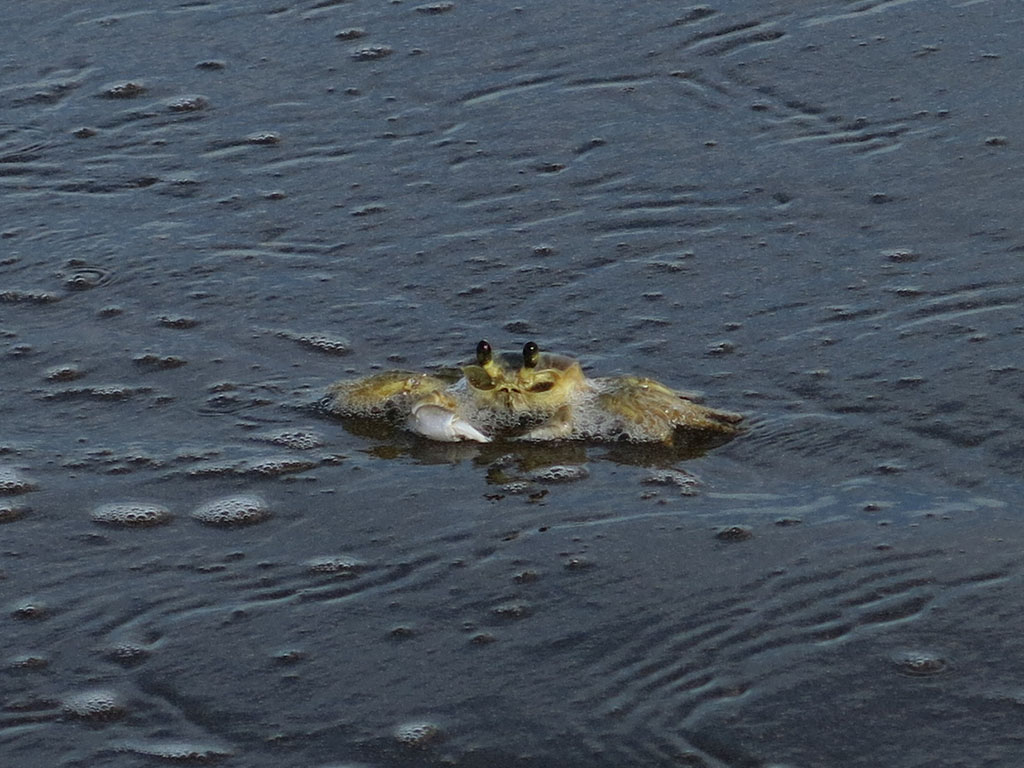 We had a few hours to chill around the lodge, so Kate and I decided to wander along the beach. Sadly there were too many sting rays to swim in the Caribbean, but we wandered a little in to the super warm waters. We spent an hour wandering, watching the crabs scuttling up and down the beach, and arriving at a small lagoon. The rest of the afternoon was spent relaxing by the pool and escaping the heat with a drink in hand. Life was alright. 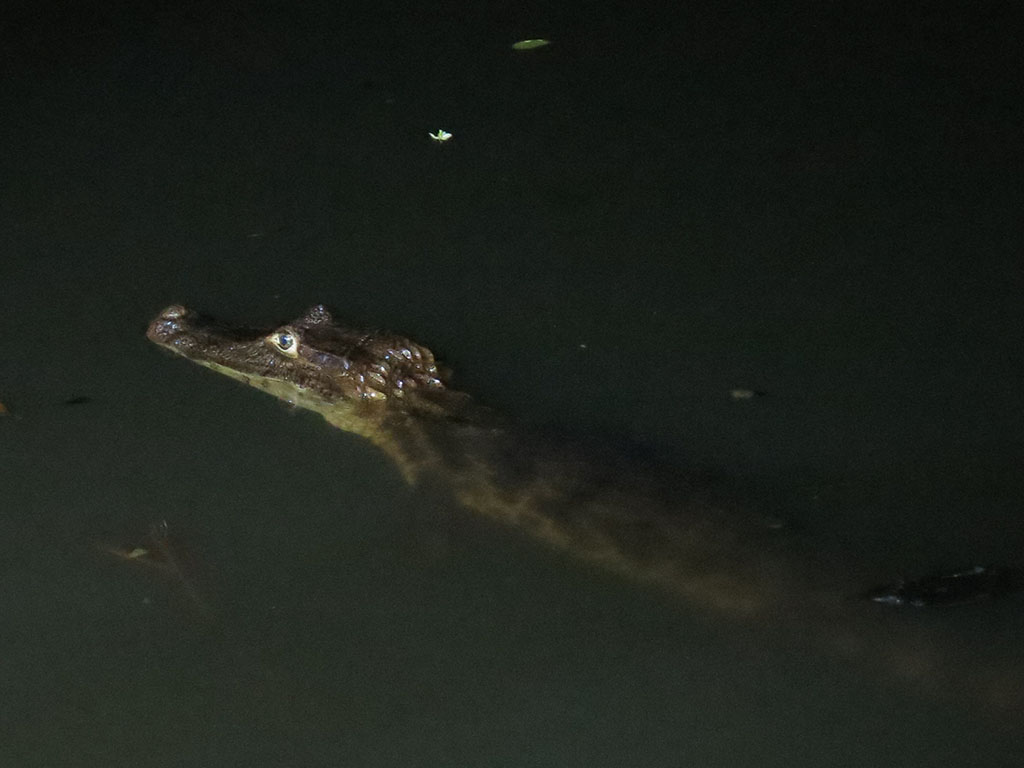 A group dinner at the lodge was nice and early, before many of the group jumped aboard a boat again to cruise the canals and see what wildlife could be found. A friendly caiman (alligator) greeted us at the boat and throughout the 2hrs we spotted many sets of glowing eyes in the waters as the caimans came out to start their night of hunting for food. 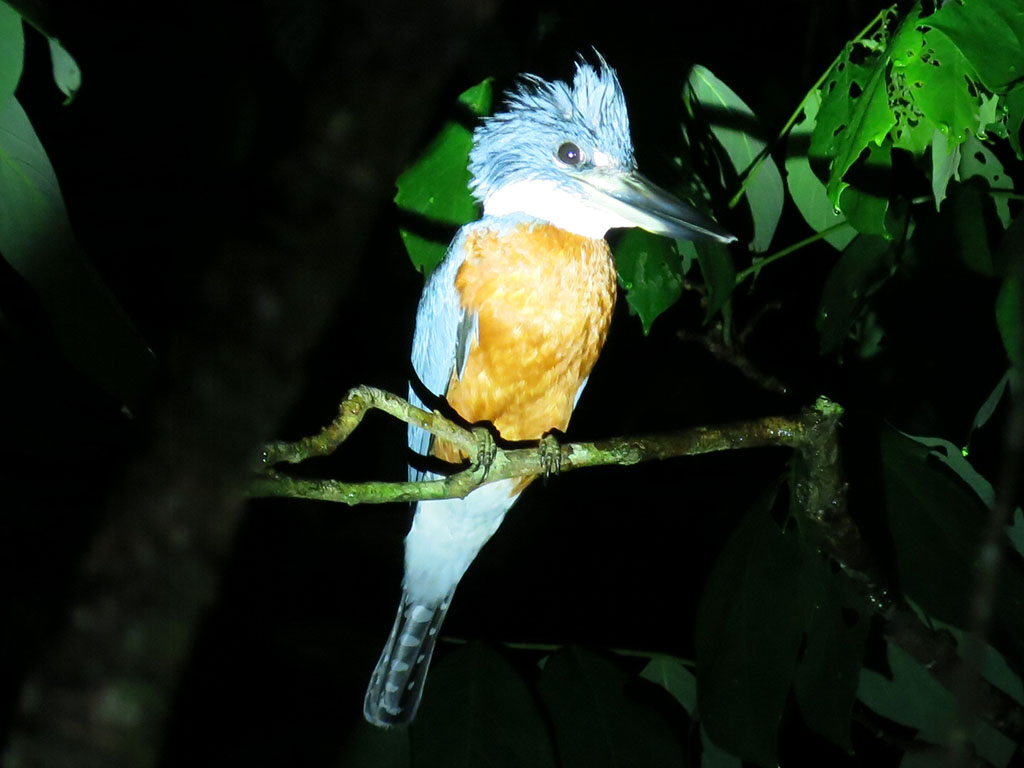 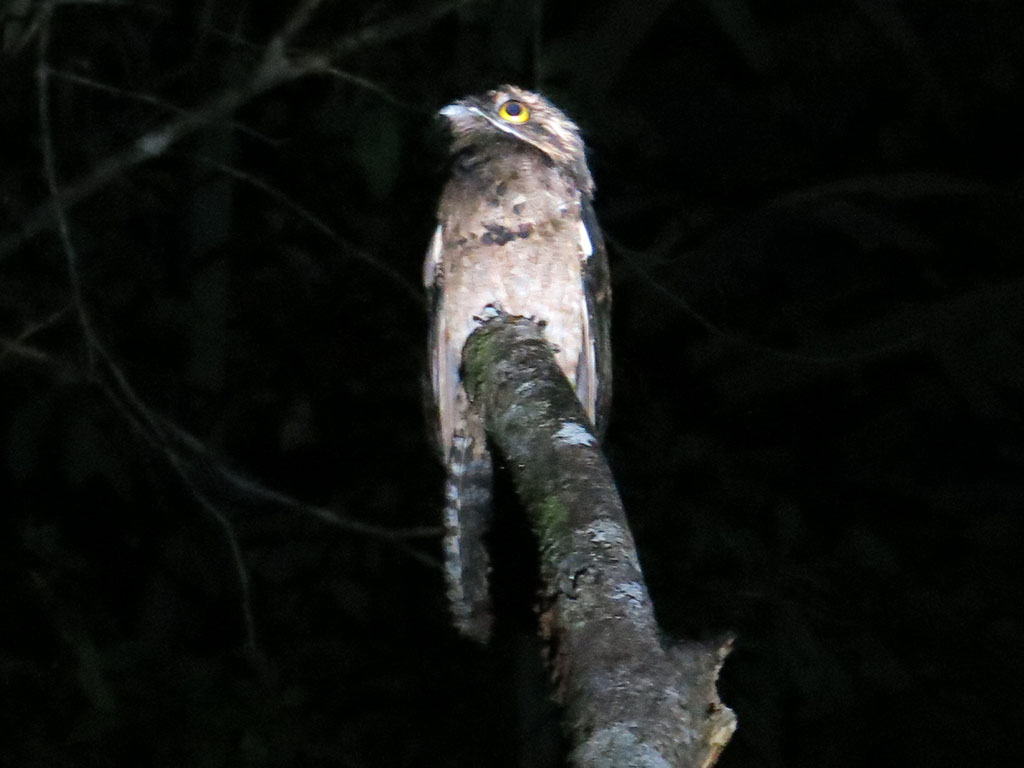 they only come out at night

It was amazing to slowly make our way through the rivers and canals in the darkness, with only the torches of our guides zipping around the trees looking for wildlife. It was a fairly quiet night, with no big animals to be found. But we did find lots of variety of birds and even tiny bats perched on a tree. My favourite were the basilisks that were at first hard to spot on their branches and then stood proudly as we took snaps.

A massive rain downpour (our first of the day!) suggested it was time to head back to the lodge as we perched under our ponchos for the journey back. A little damp from the rain and the humidity, we made it back for a small dry down before hitting the sack before another early morning coming up.