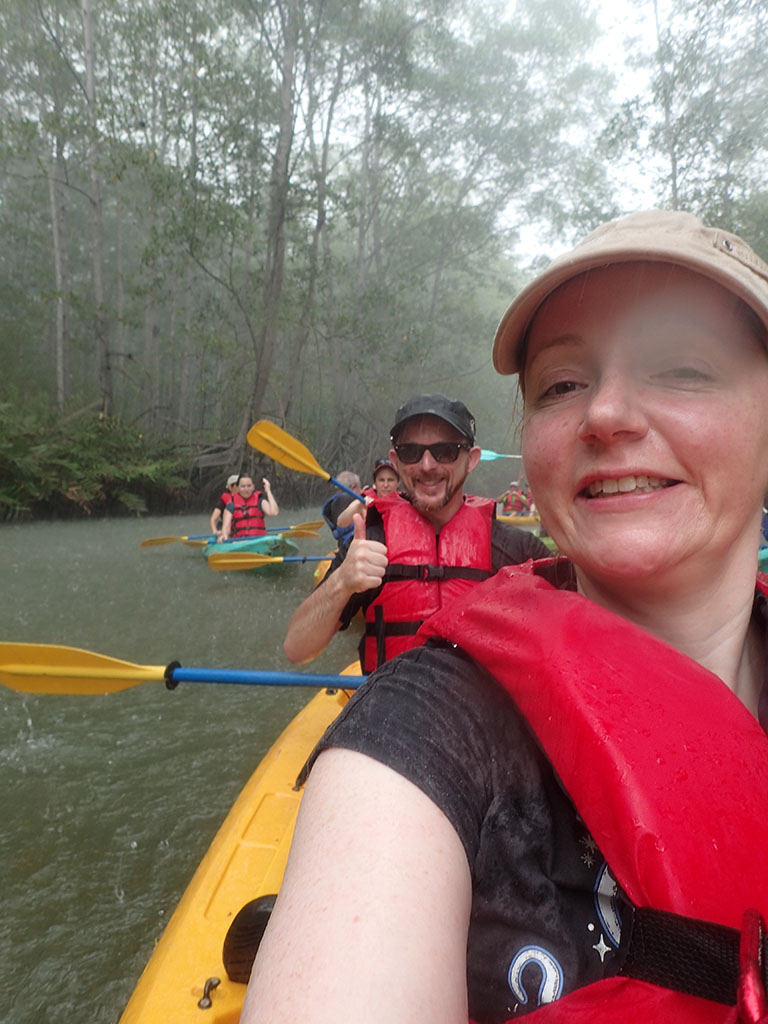 Another early start greeted our first day in Manuel Antonio. We were at the mercy of the tides this morning, as many of us elected to head out on some kayaking in the nearby mangroves. We needed to go when the tide was high, and for us that was at about 7:30am, so with no chance for brekky, it was off we went.

Our kayaking leaders provided a quick snack and coffee, before we loaded into our kayaks, ready to explore the mangroves and the wildlife amongst them. This was quite different to any of the exploring we had done to this point. While parts would be similar to Tortaguero, much of it was quite different, with the mangroves providing not only a unique environment, but the opportunity for some different animals.

So we set off in glorious sunshine, and started paddling through the somewhat narrow canals amongst the tree roots. On our way we came across some bats, lizards, crabs and quite a few boa constrictors, hiding up there in the trees. Apparently a couple of them were in the order of a couple of metres and we were kayaking underneath. Um, good idea us.

And all of a sudden the clouds rolled in. It didn’t cool down, but the rumble of thunder and then a few minutes later the heavens opened. It poured! The rain came down hard and we had nowhere to run. Ha! It didn’t matter, as the rain was so warm and it was super refreshing to be in it. 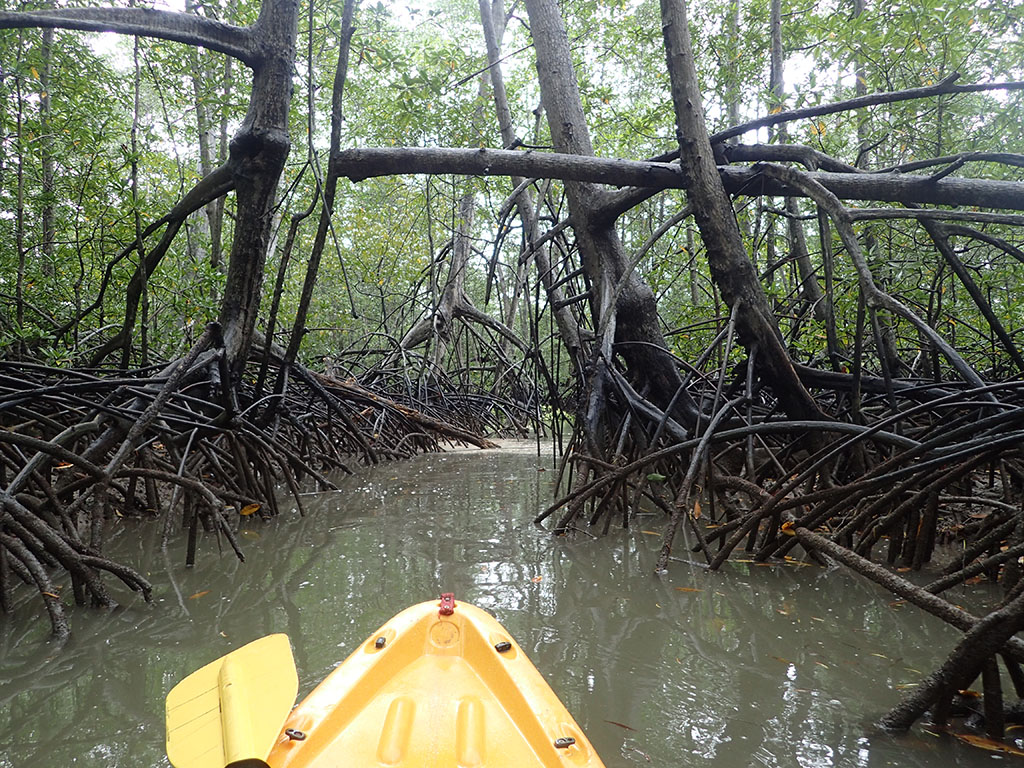 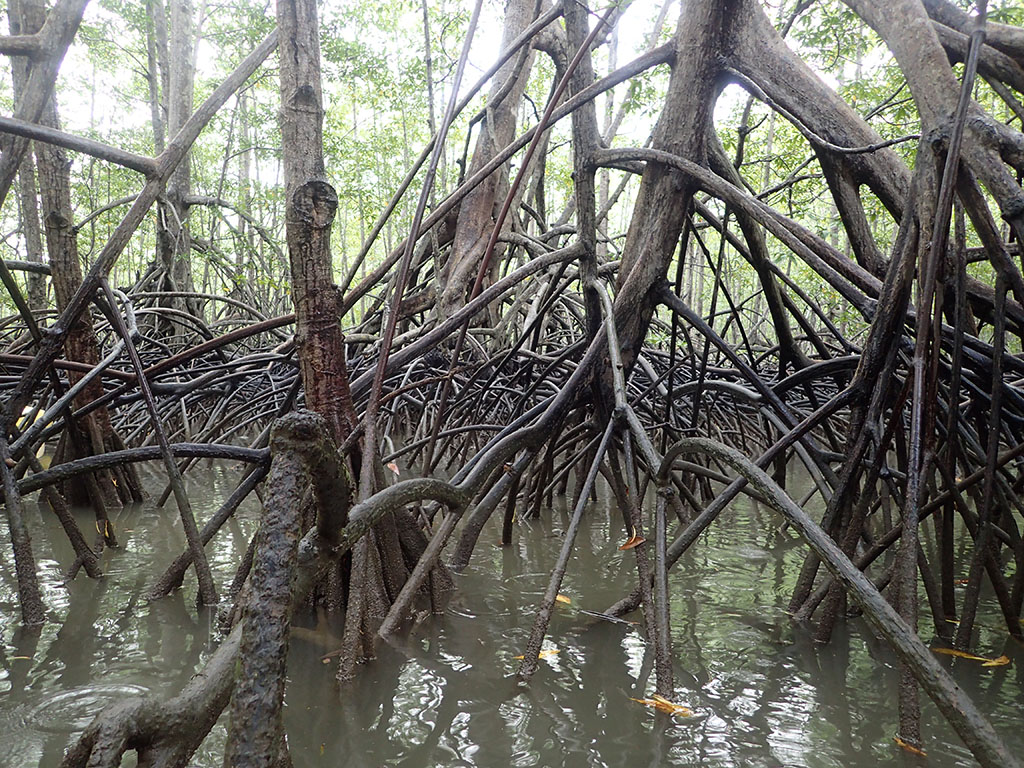 We didn’t stop, but kept on paddling, enjoying the warm tropical rain. At one point we entered a small canal that was very tricky to negotiate in our two person kayak, with the nose often getting stuck in the branches, but it was great fun. In amongst it all, our guide gave us a bit more of a rundown of the mangroves themselves before we kept moving on. 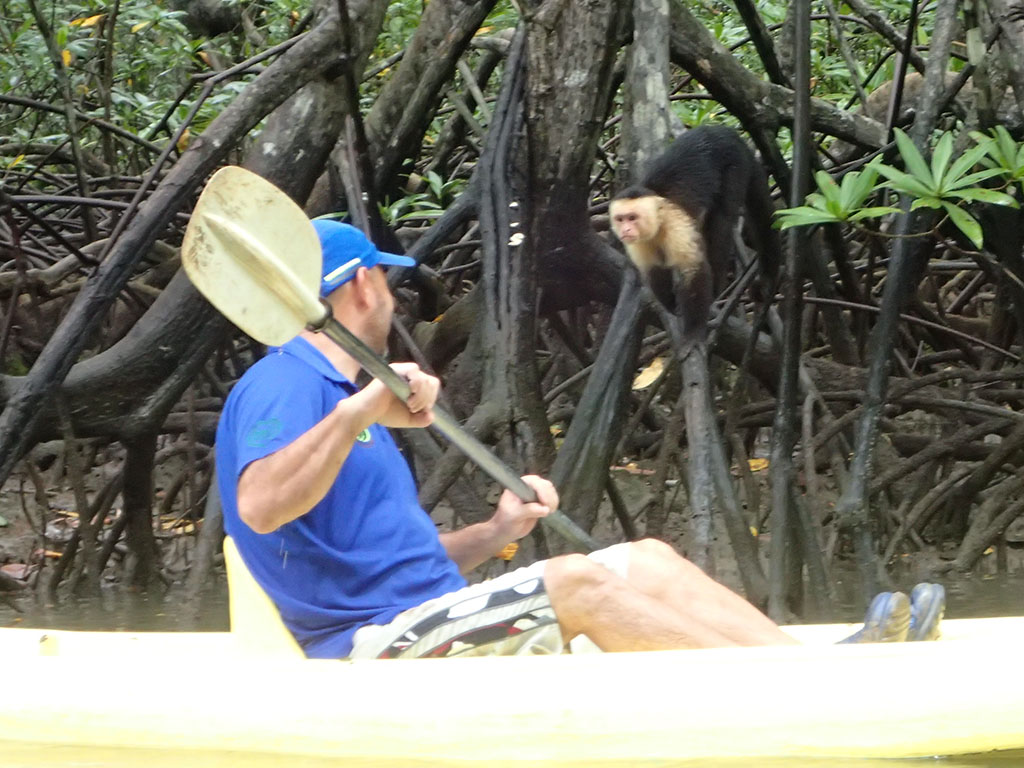 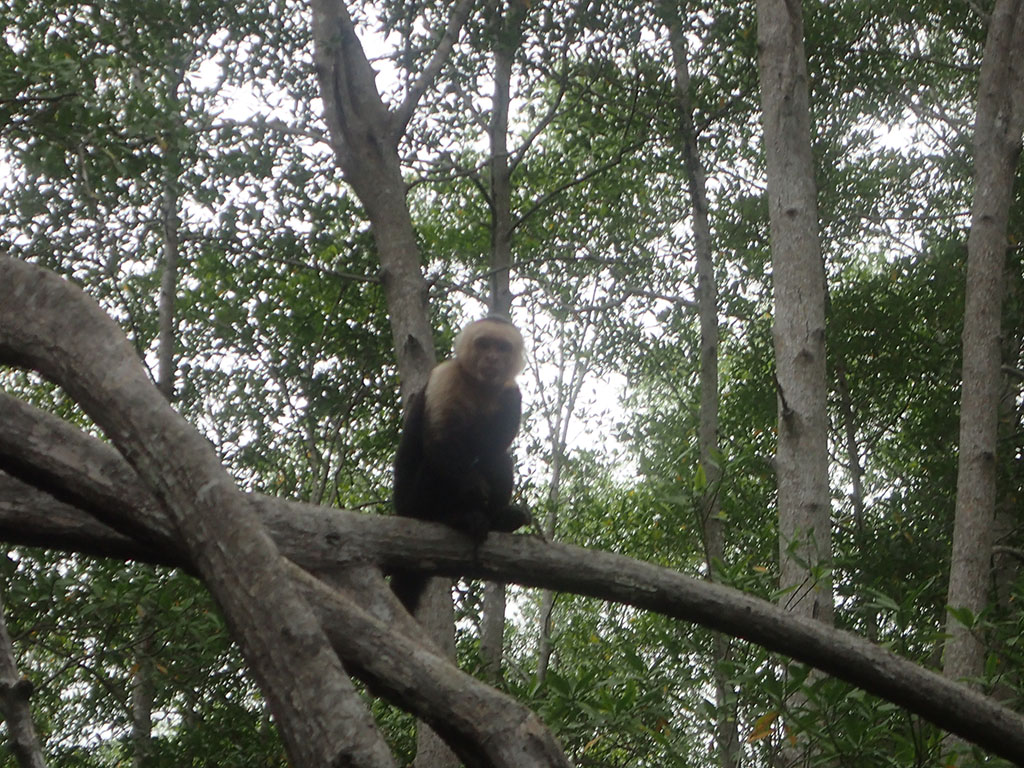 what you looking at?

The rain had stopped by now and it seemed the wildlife came back out to say hello, in particular a pack of white faced monkeys. These guys were not shy and were happy to sit on the side of the canal and harass us as we stopped to have a closer look at them. One in particular didn’t seem too impressed that our guide was so close. 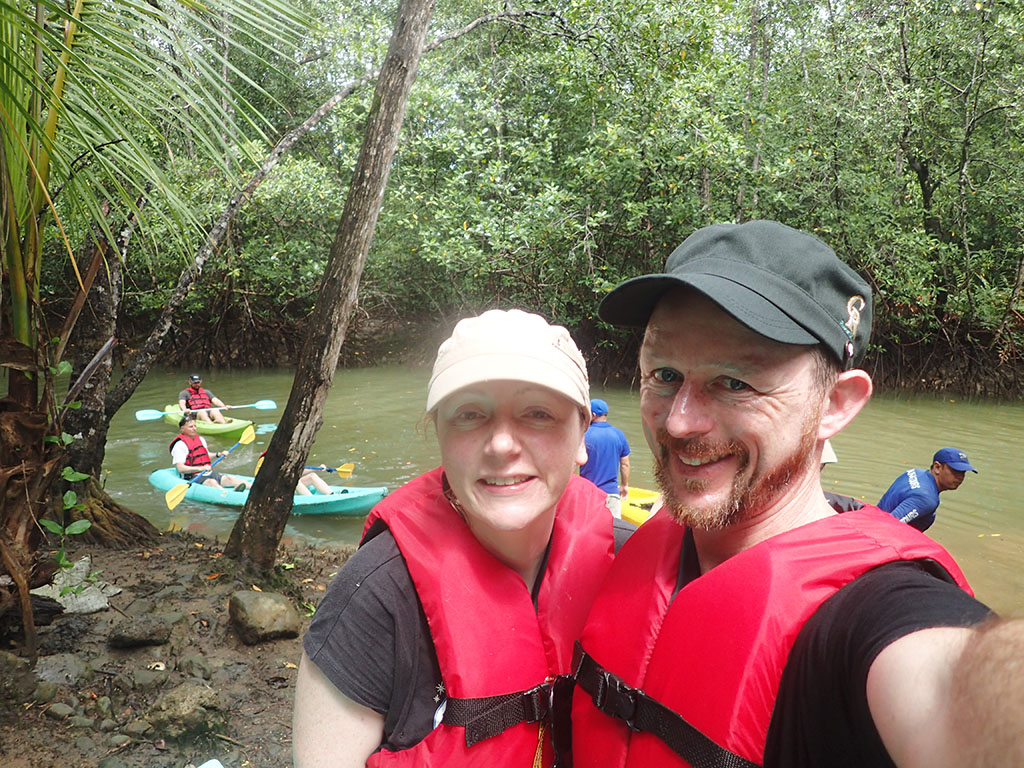 With that we were back at the dock and it was time for a late brekky. Rice and beans and plantains! With more salsa I was loving it.

From there it was a free afternoon for the most part. A bunch of us elected to head to the Manuel Antonio beach and chill out for a few hours. So Andreas negotiated a good price for some chairs and shade and 7 of us promptly set up camp on the beach. 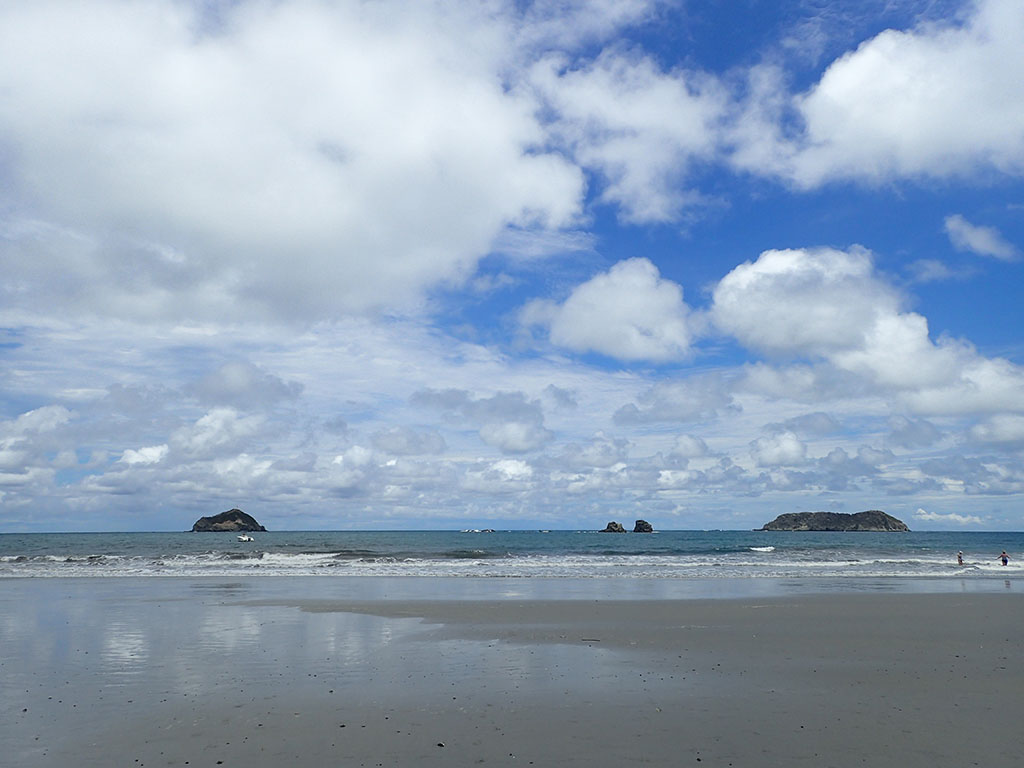 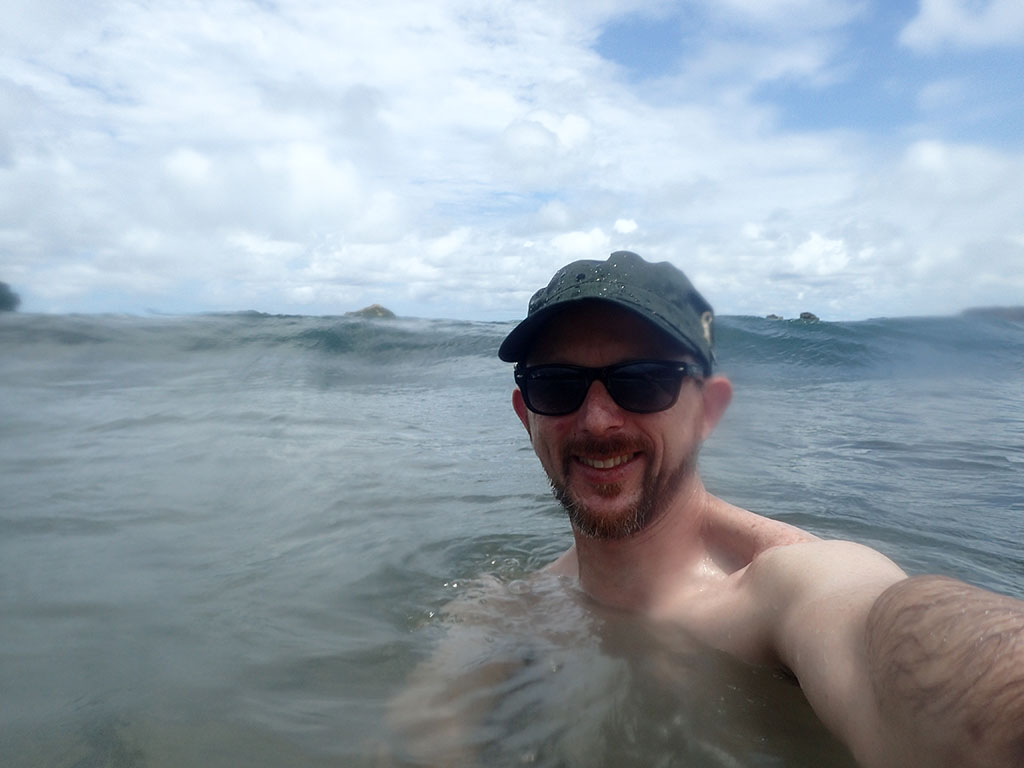 I went straight into the water. So so warm! It was gorgeous. Unfortunately the clarity of the water left quite a bit to be desired, as the dark sand just made it very cloudy and very difficult to see anything really. That was OK as the temperature was nice and warm and it was nice just soaking. It was also a popular spot for surfing and parasailing, so every now and then you had to be looking out for a surfboard coming at you. 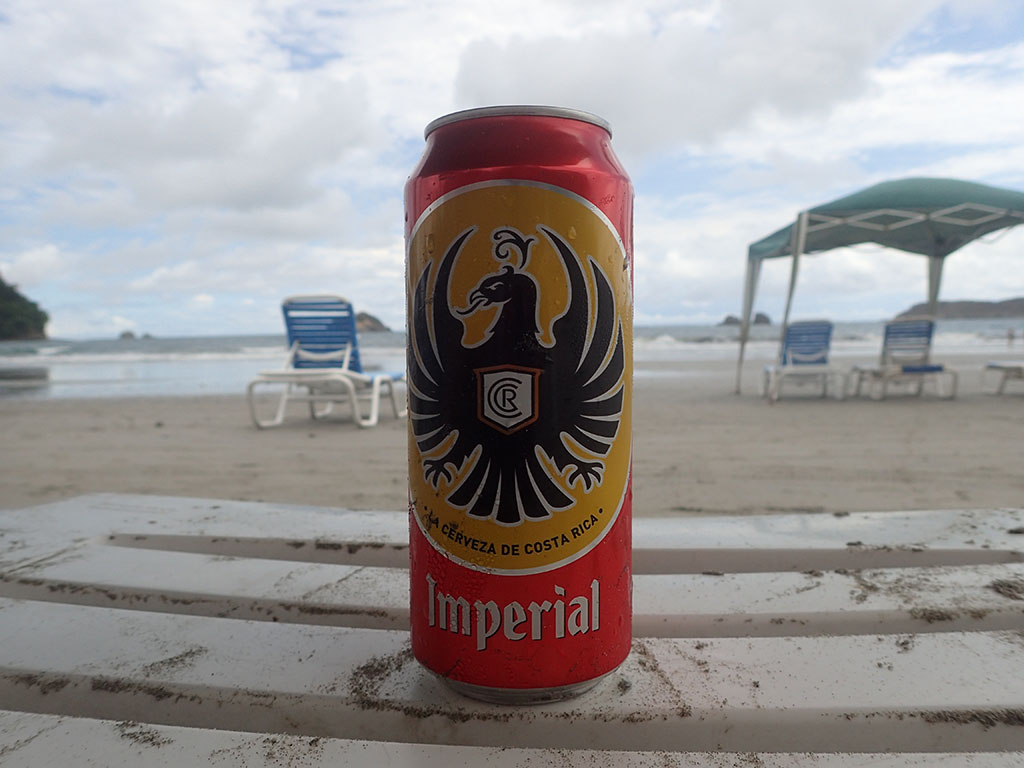 The supermarket across the street proved very handy for getting snacks and beers, and in no time 4 hours passed and we were getting ready to leave. Kate and a few others were off for a late afternoon yoga class. I was happy to just catch the local bus back to the hotel to relax by the pool and chill for a bit. It was just on happy hour when Kate and the other arrived back which was nice timing! 2 for 1 drinks meant a few gin and tonics later we were feeling pretty good and also nice and hungry.

Dinner was at the Quepos Marina which was in the process of being developed into one of the largest marinas in Central America. A nice seafood dinner later and it was time to call it a night.