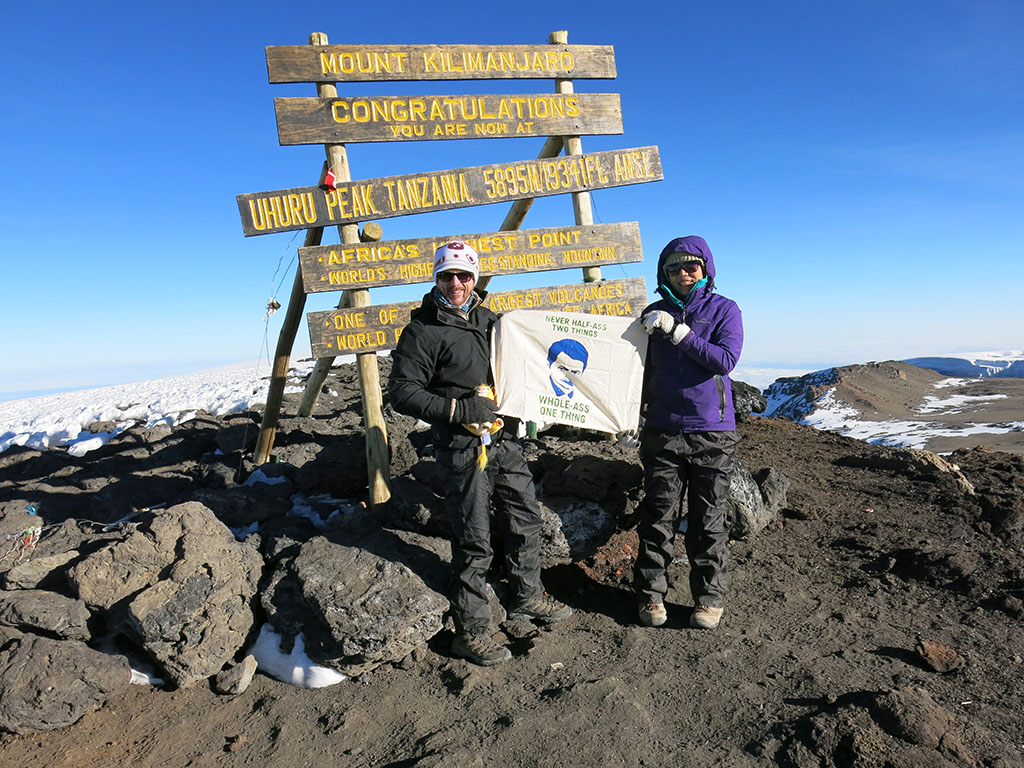 Distance: Not quite sure… maybe 10km?

11pm (yes, pm) was the wake up call. Thankfully I got a few hours sleep. CC was in struggle town a bit so didn’t do so well. We looked like she was doing it tough but boy if she was still ferociously determined (as determined as anyone can be when faced with 6+ hours of hiking in the middle of night in sub zero temperatures).

Rashili made us a light breakfast. All I could really stomach was some porridge and tea. Not that I was feeling sick, rather my body just didn’t know what was going on. At 12pm, it was G2G (good to go). It seemed all the groups took off at the same time… Tony and Filipe, the Canadian gals, Ryan, the Danish couple. There were just nods of “good luck” to everyone we saw.

From minute one it was tough. 4600m. Little to no sleep. A STEEP start clambering up rocks. Oh boy.

I pretty much got into my marathon running mode from the start… just focus on each step and keep moving even when you think you want to stop for a break. Each step was difficult. 99.9% of this push was going to be steep up, and there were going to be over 7 hours of it.

The first hour was the steep clambering up rocks, which used a different kind of energy. After that it was just a relentless switchback path. Even though it was a crystal clear night (no rain! yay!) it was only a quarter moon, meaning we could see bugger all. It was just the headlamps of CC and myself and our amazing guides Mhina and Aris. Even then, all I was really looking at were my shuffling feet.

Mhina and Aris were spot on. They treaded the fine line of pushing us but just as hard as we had to. Rather than stop, they would ask us to get a bit further, wary that we were in for a long haul and that the freezing temperatures (or about -15 degrees celsius) were not conducive to stopping and cooling down any more than we had to. So onward we kept pushing. 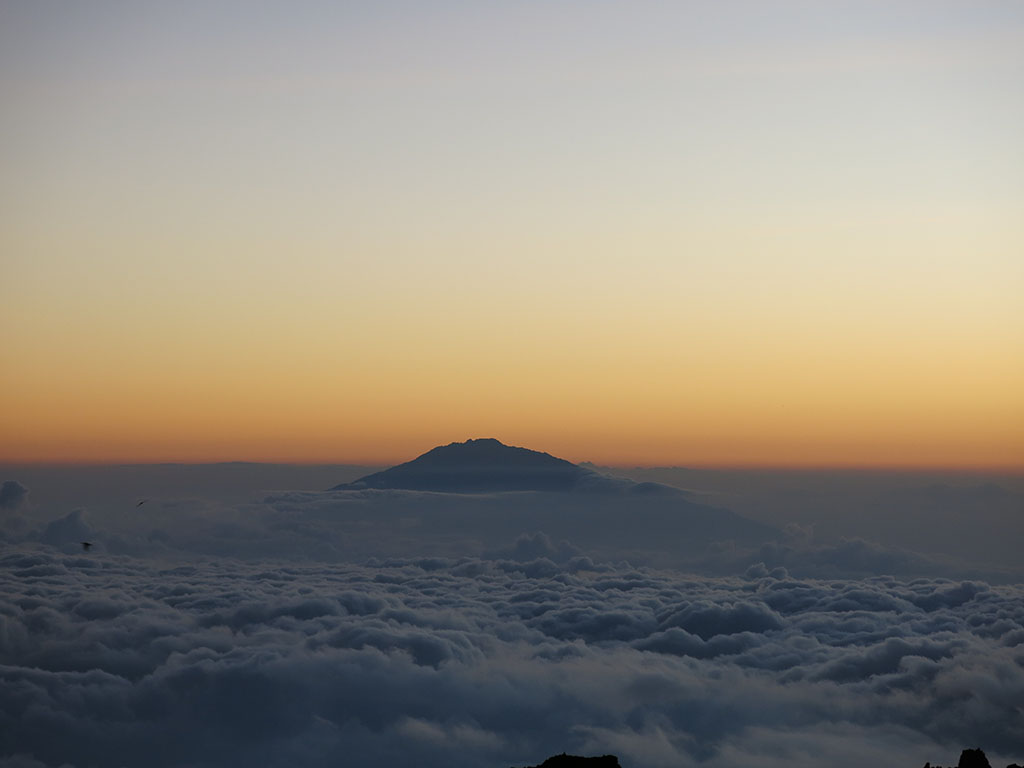 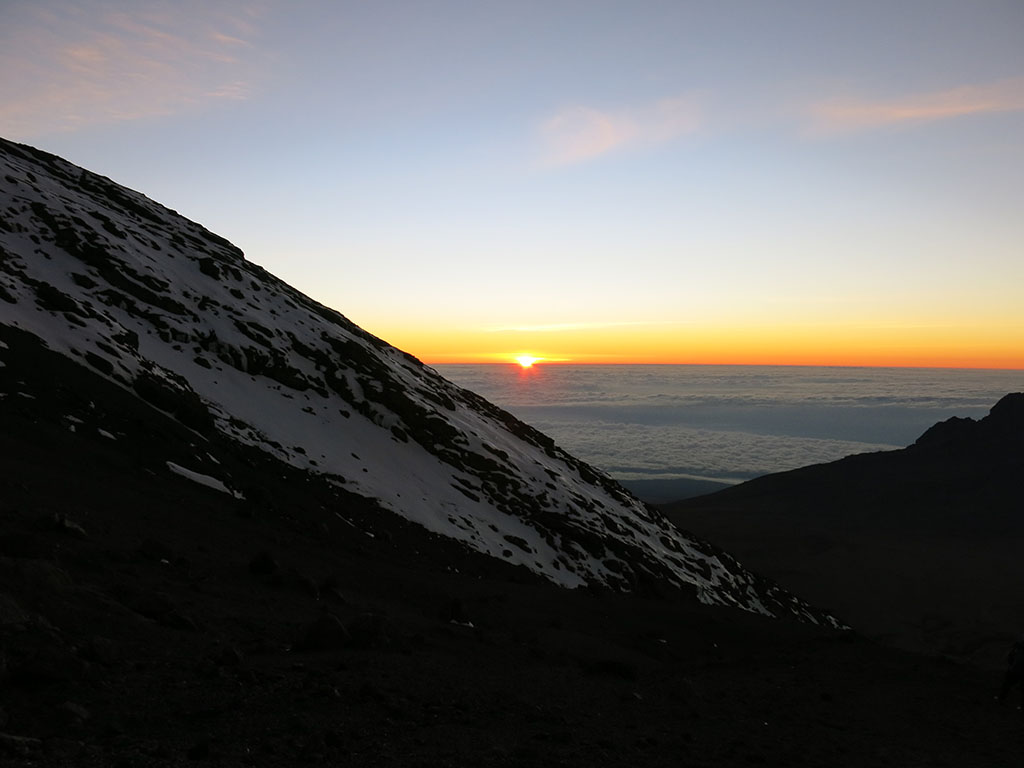 the sun peeks its head up 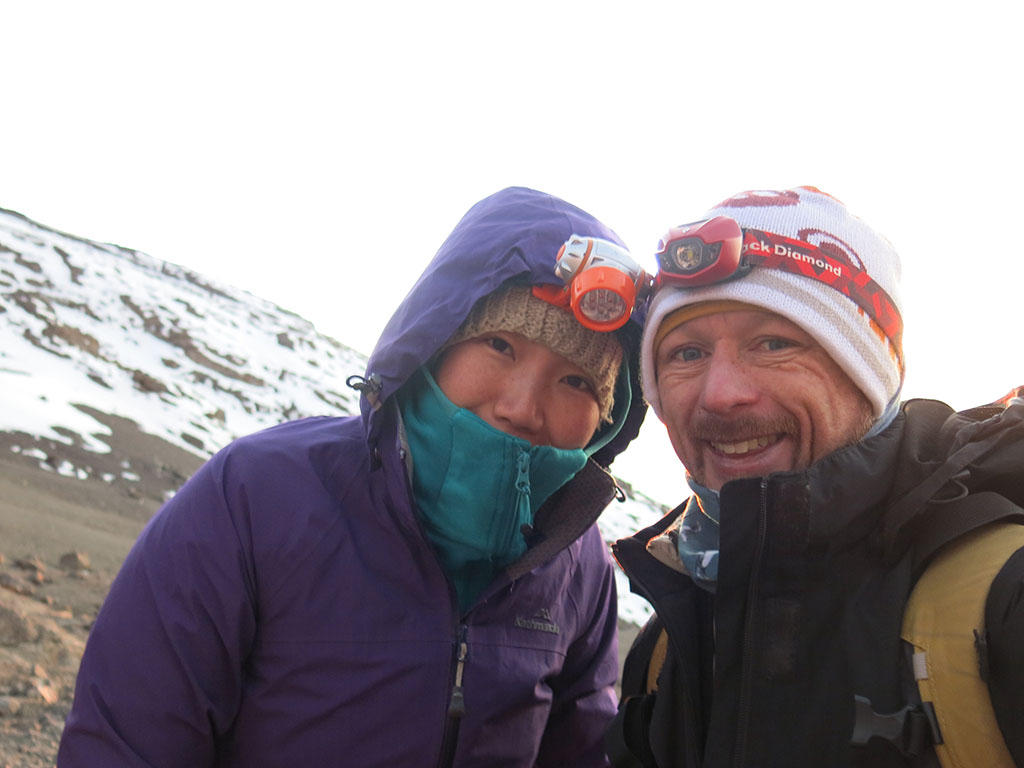 This went on for hours. About 6+ hours in fact. As we got closer, the path became a bit more clambering up to a ridge. Just as we were reaching this point we stopped to watch the sun come through the clouds. Wow. We were on the highest peak in Africa watching the sun come up. It was something else and really quite difficult to get the head around, especially since we were cold and tired and still pushing upwards. 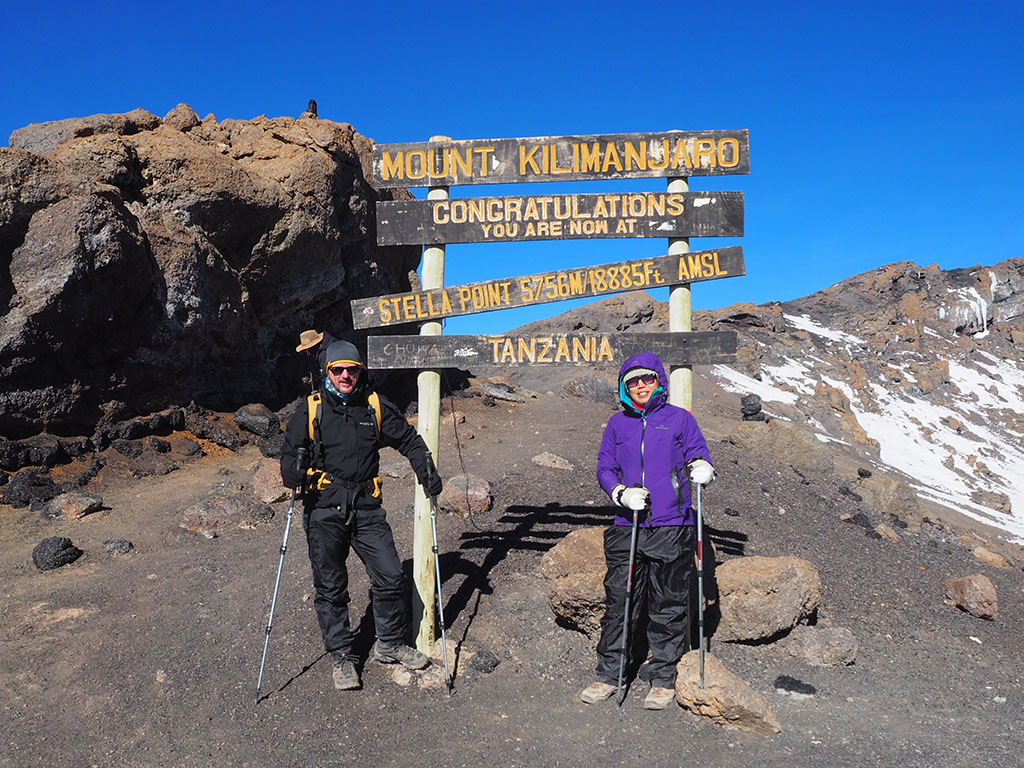 As we got up the ridge a little more we saw a sign. Yes! This was for Stella Point, and while that seems exciting it was also somewhat of a kick in the guts. It was approaching 7am, and the sign let us know we were still a good 150m below where we wanted to be. While it doesn’t sound like much, the reality was it meant maybe another hour of hiking. While we would never dream of giving up, it didn’t do much to bolster the spirits. But we didn’t stop, we just dug in and kept going.

By this point we reached two things. The first was fellow hikers starting to make their way down. Canada! Our gals from Quebec made it! That was so great. Two more vibrant and carefree girls you could not hope to meet, and we were super happy for them. But. Must. Keep. Going. The other thing we came across here was snow. In fact we were now surrounded by snow and a huge glacier. We started in rainforest and were now trekking in snow. Mind blown. What was sad to consider though was that in 20 years time, at the rate it is going, there probably will not be any snow or glacier on top. That was a truly sad thought.

Onward we went. The sun was out and it was glorious up there… bright sunshine reflecting off the ice. We were truly lucky to have absolutely perfect weather.

Just on 7:45am we saw it. THE SIGN. The sign to welcome us at the top. As we approached I will admit I could a bit emotional to finally make it. 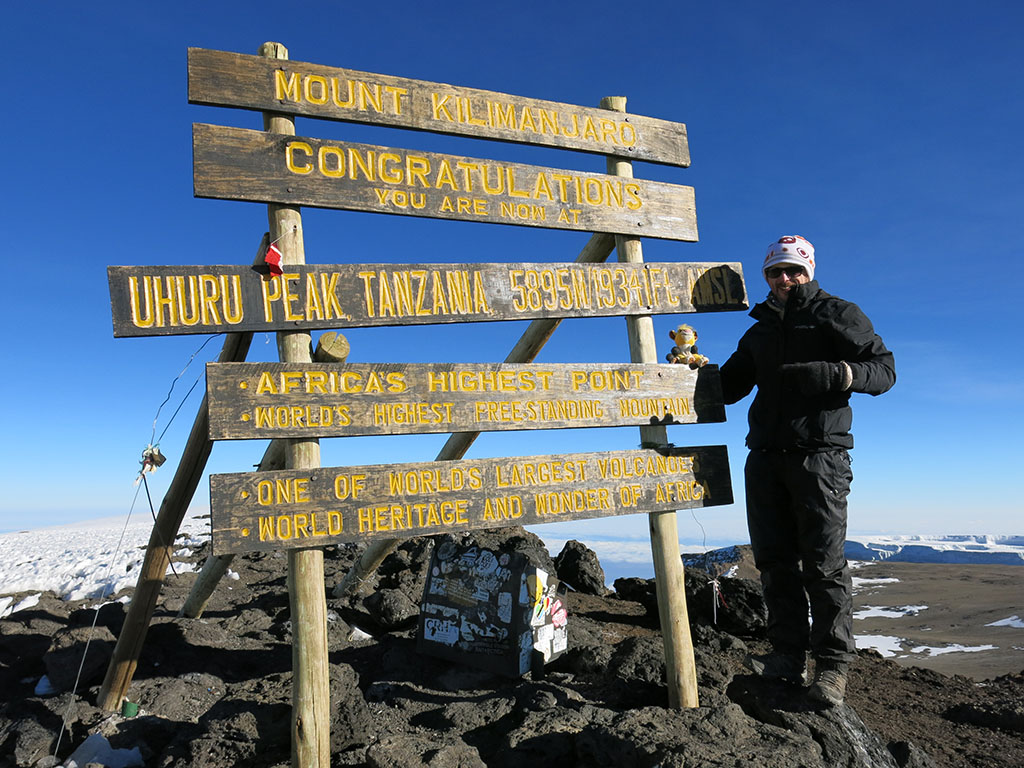 And at 7:50am we officially made the summit of Mt Kilimanjaro, the highest peak in Africa, and highest free standing mountain in the world. My bud CC and I had made it. Not just made it… CONQUERED IT! 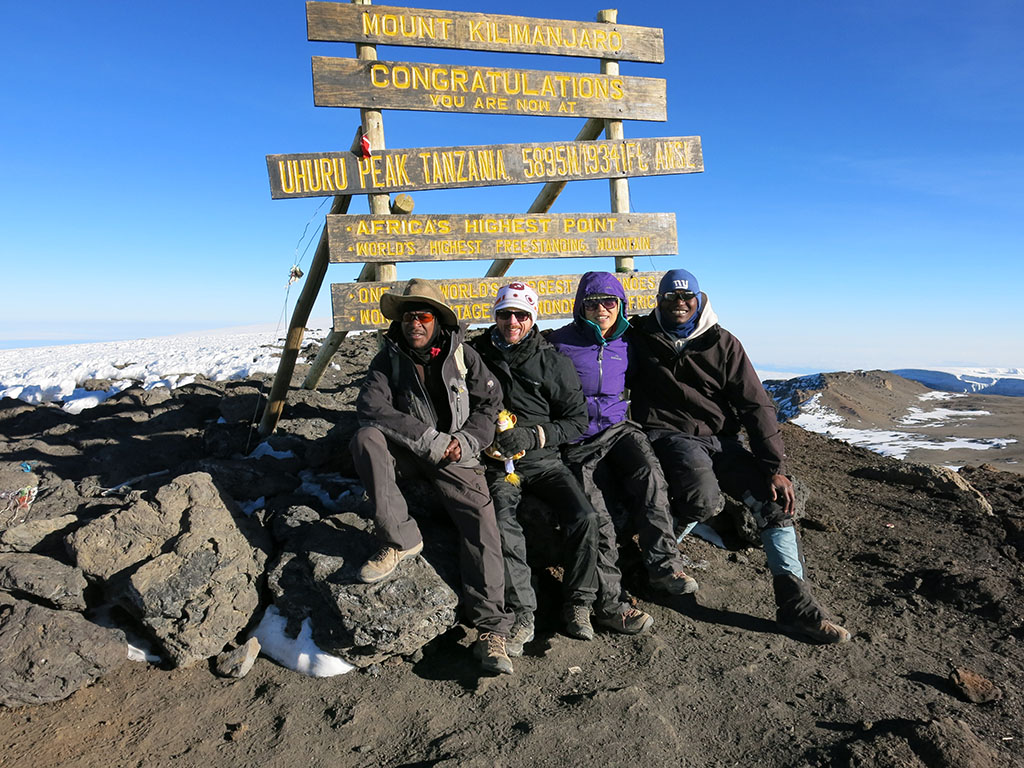 with my amazing buds

As an extra bonus, who do we meet at the top? Our great American pals Filipe and Tony! That was amazing. Apparently they had struggled a little too, meaning they arrived just 5 minutes before us. Not only was it an honour to be at the top with my amazing bud CC, but to have our two close new mates there too was special. We did a bunch of pics at the top, including with Mhina and Aris. Those two certainly were a major reason for us making the top, and two better guides we could not have wished for. They knew CC and I better than we knew ourselves down the stretch, having the utmost confidence we would make the summit. 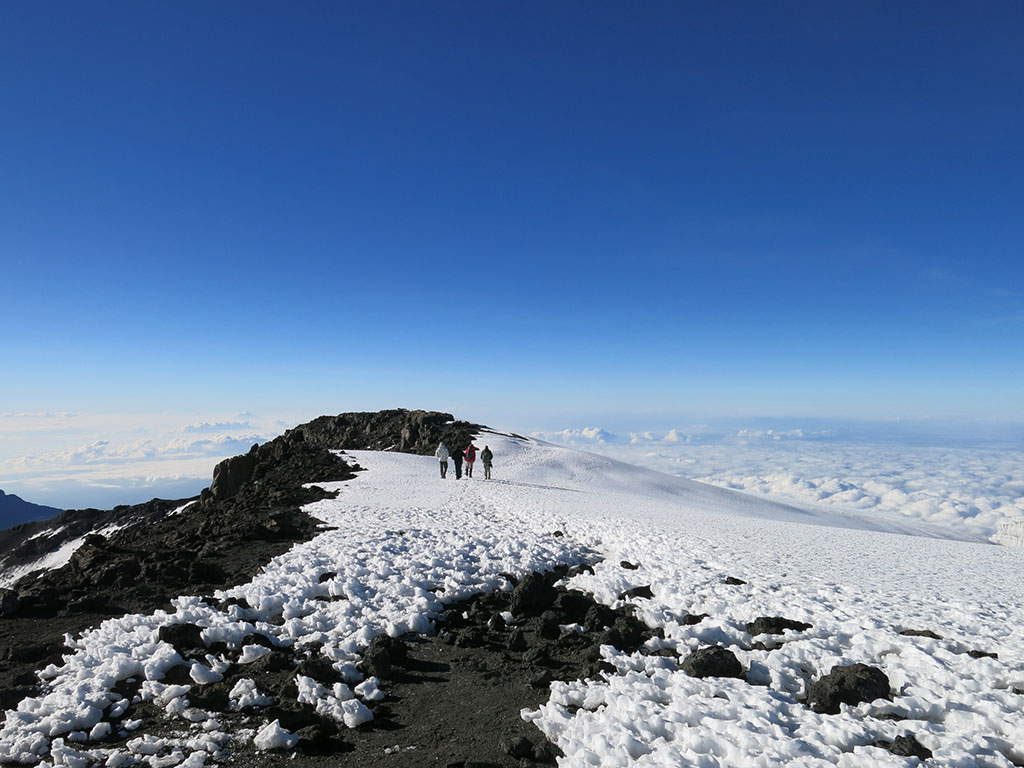 other trekkers at the top 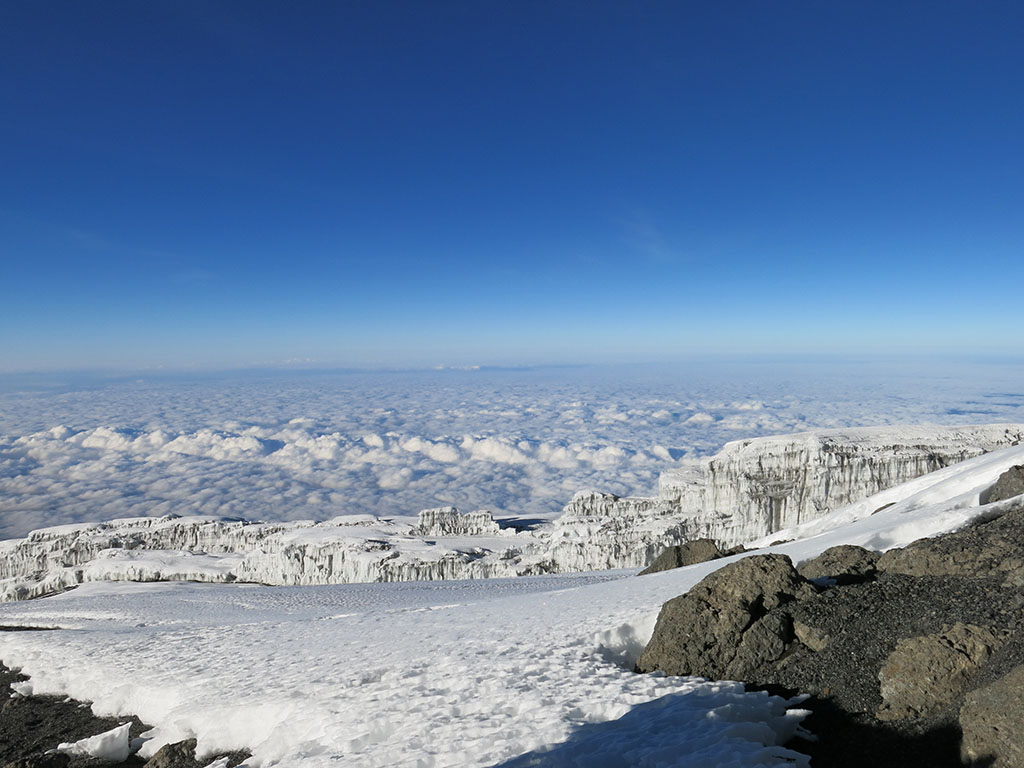 just 4 days ago we were in rainforest. we WALKED to a glacier. 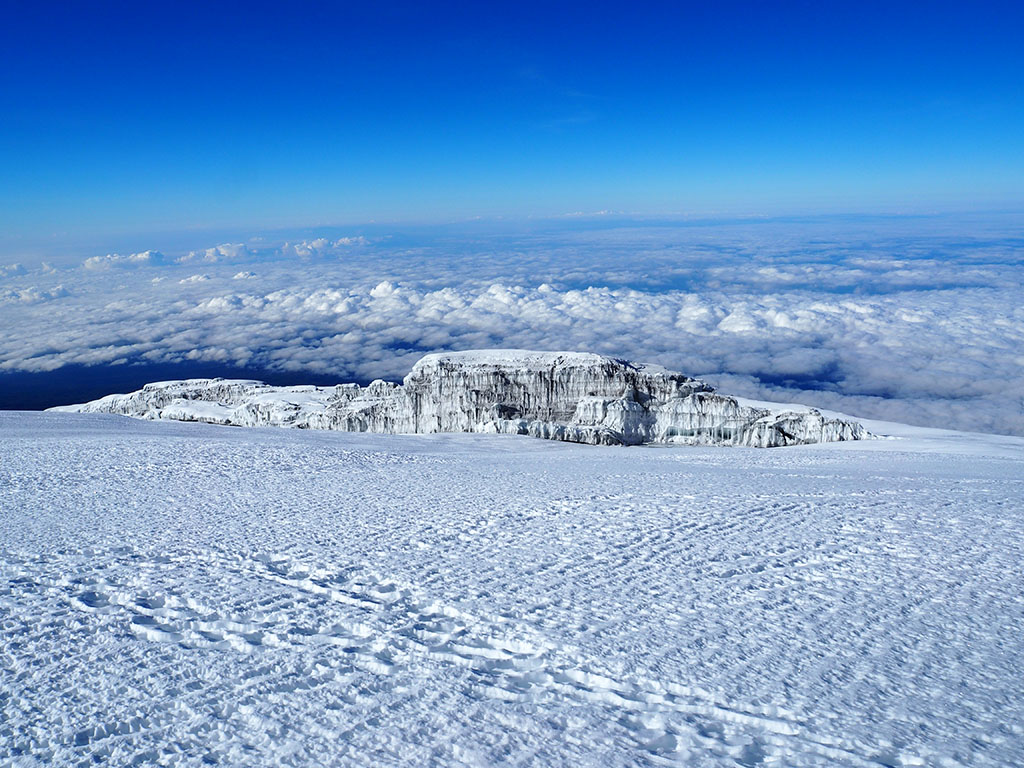 So, Uhuru Peak? It is strange to think you spend 5 days to get there and only stay for 10 minutes. As I mentioned, I got a bit emotional having been through that hard slog to get there. But what else do you do when you get there? It is too cold to sit down and soak up the views, not to mention the air is pretty think at 5985m. All you do is take some deep breaths, look out over Africa, revel in your awesomeness, and then start your way down. So we said our goodbyes to the peak of Africa and headed back down.

Down was a different kind of tough. Yes, it was all downhill, meaning we were travelling at about 3x the pace. But it was hard work, as the likelihood of accidents seemed much higher. The path was loose and so we had to concentrate a lot, tough when it is 8am, you are cold and lacking sleep. But we kept at it. 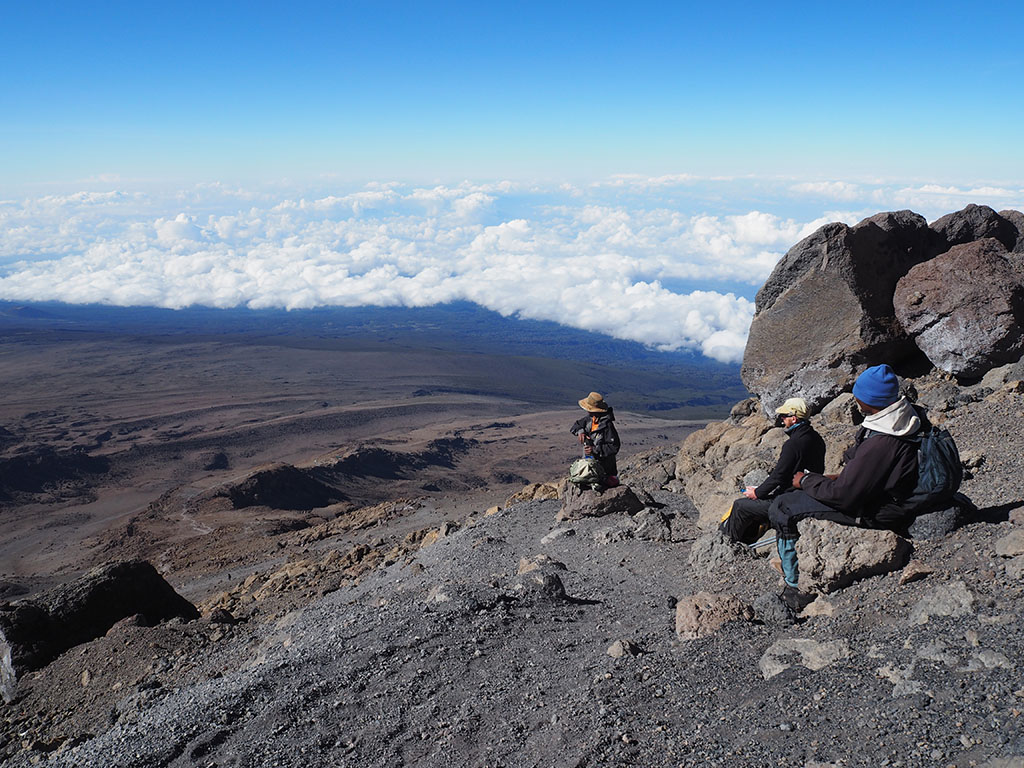 on our way home

It was strange seeing our path for the first time. I was thinking “really? this is the way we came up?!”. In many respects it was good to do it in the dark, not seeing how far we were from the top. All in all it took about 3hr 15min to get back to base camp at Barafu. A bit longer than expected, but we had a few stops on the way down. But by about 11:30am we were there, having reached the summit.

As we entered the camp we saw a couple just checking into to the camp. They must have come from nearby Karanga Camp. We gave them a howdy and well wish and went back to our cosy tent, which was waiting for us to have a rest.

We managed to have an hour or so’s sleep before getting up and packing our things. Even though we had done the summit it was no time to hang about! We still had a bit of hiking to do. No ones stays a second night at Barafu as water is scarce and it is best to get down low from the altitude. So after some lunch we saw the US guys and bid them farewell and started heading down.

As mentioned, Mhina suggested that we make another change to our itinerary. Rather than head all the way down to Mweka Camp at 3000m, we could go to closer Millennium Camp, which was at about 3900m. This meant less hiking today, and avoiding a steep and rocky path between those two camps that was not great to do tired. We liked the idea of that and headed off. 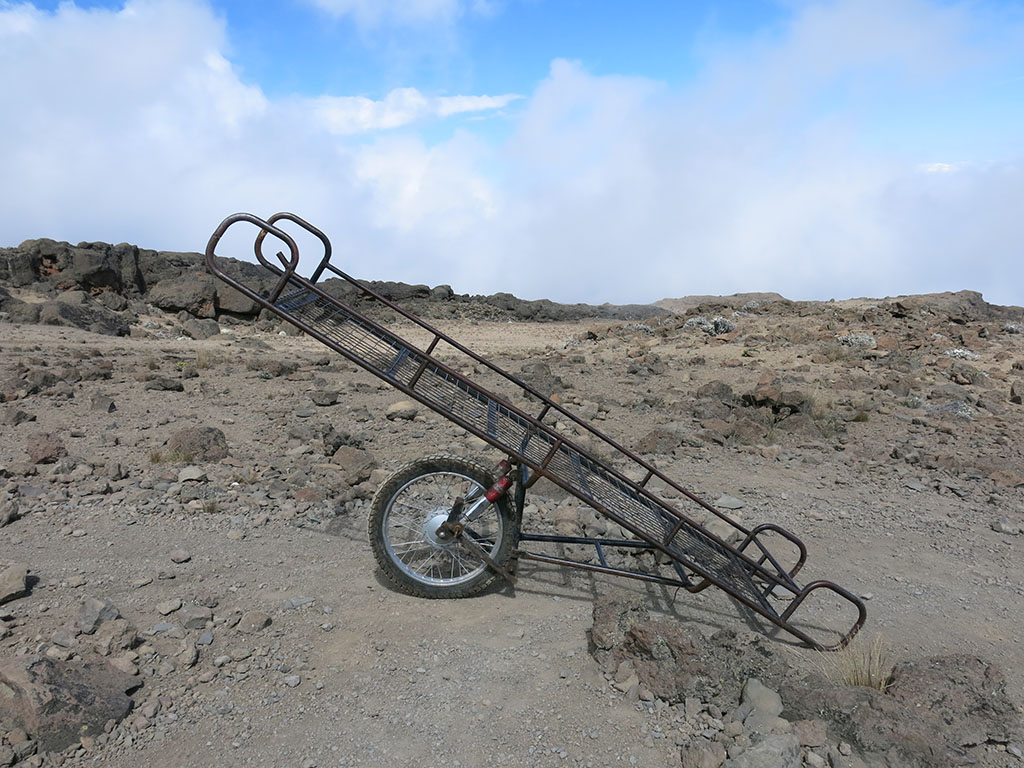 not sure i would fancy coming down on one of these 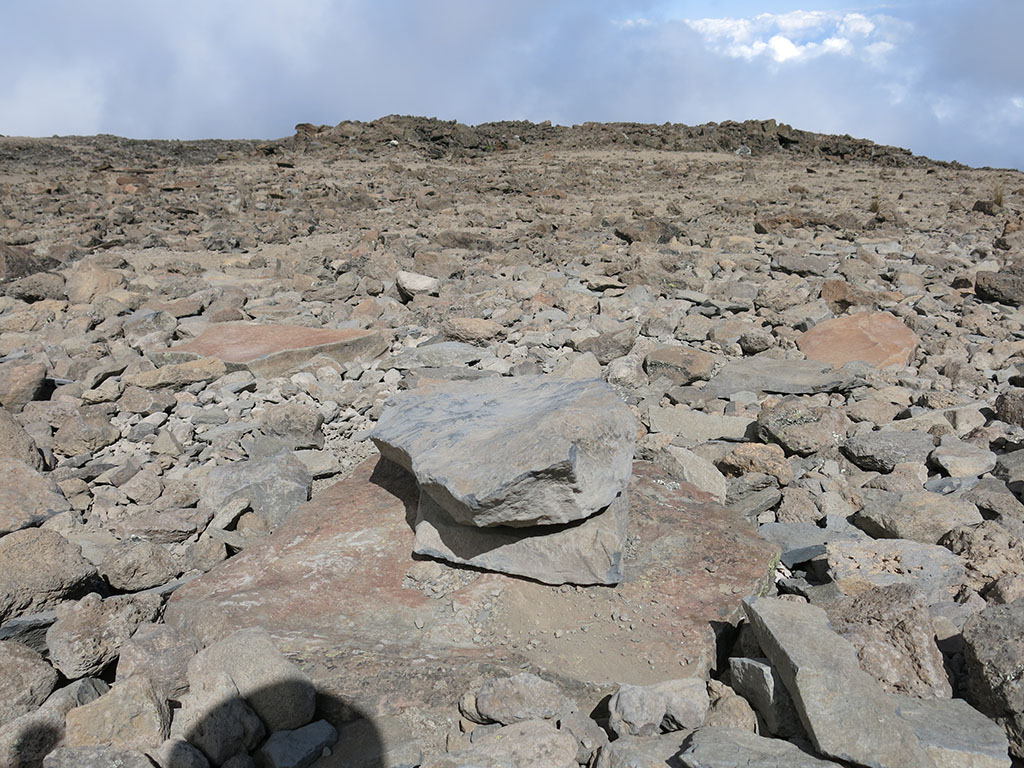 we decided to start our own new rock pile 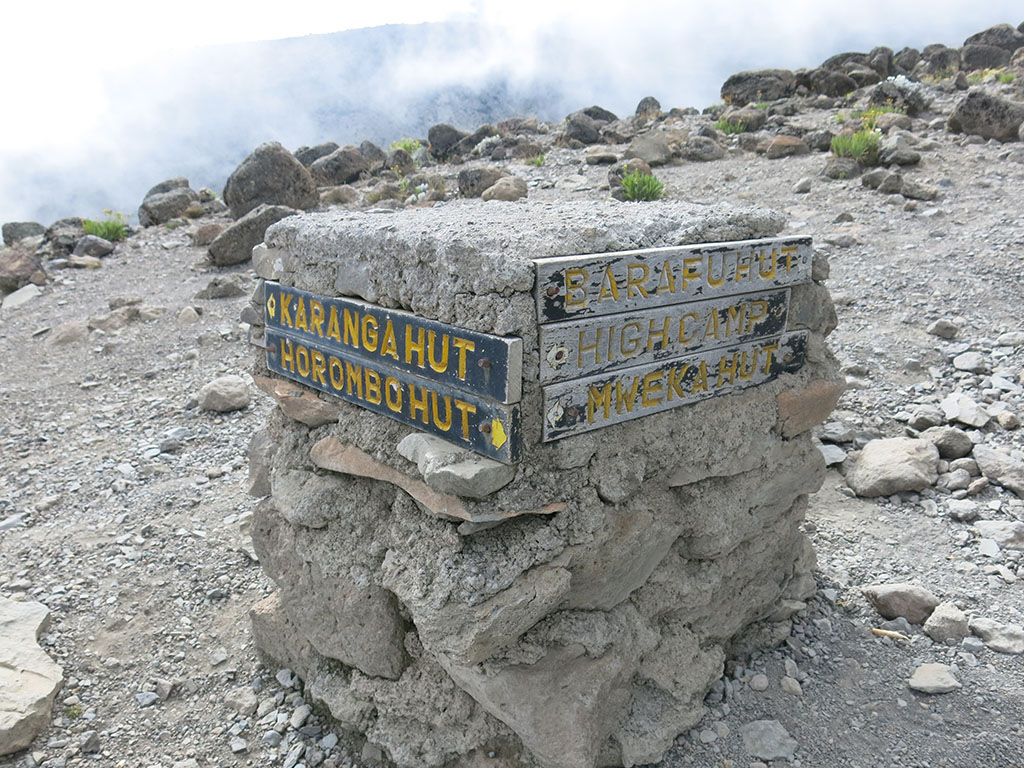 which way were we going again?

What followed was a pretty easy 2hr hike on a nice smooth trail. I liked this! I was expecting something a little more difficult, but this was perfect for tired, weary hikers. On the way we came across a bunch of trolleys used to rescue people from the mountain. They were fascinating, with just one big wheel. Apparently the injured party is strapped in, there is one person on each corner of the trolley and one to control the brake on the wheel. Not sure I would fancy it, but I guess how else do you do it? 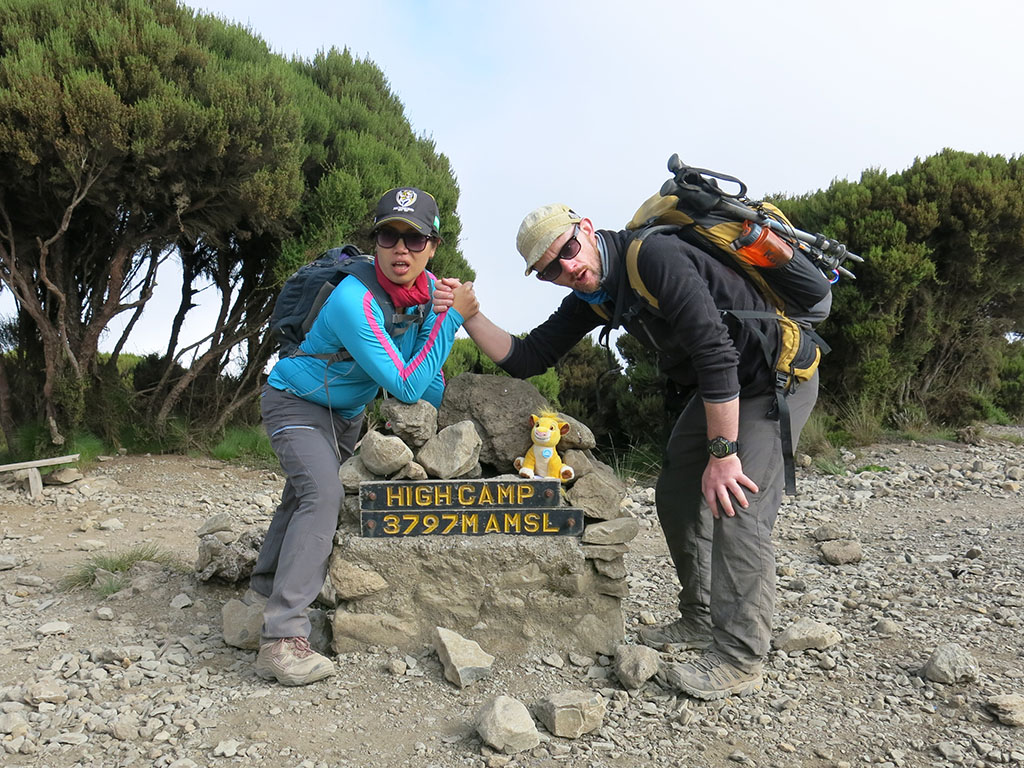 millennium camp! level up! (man we were tired)

At about 3:45pm we arrived at Millennium Camp. Just before then we saw Tony and Filipe who walked the last half hour with us. Sadly they were heading through to Mweka Camp, so we said farewell (yet again) and let them keep going while we checked in to camp and went straight to relaxing.

Neither CC nor I were too social. We were both super thankful to our crew for looking after us, but all we really wanted was a little food and then to get some sleep, which is what we did. As it turned out we had some mobile phone reception (yep!) so I sent some quick messages home to let Kate and family know I was all good, and then it was sleep.